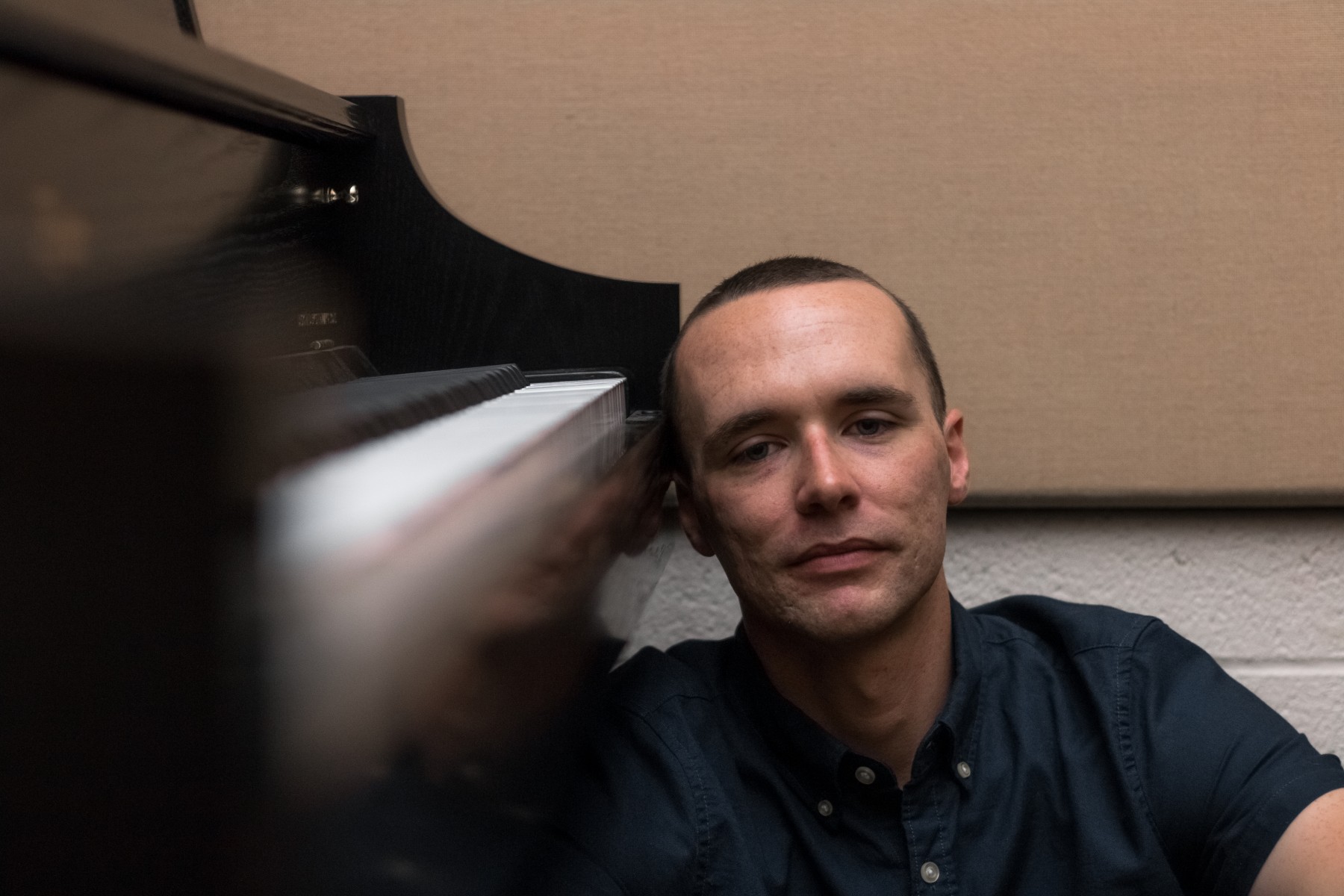 Sean Griser
The master's student is doing his thesis on how music therapy for dementia patients affects the well-being of family caregivers. Photo by Keith Carapella

Music feeds the soul, as the saying goes. Sean Griser believes that now more than ever, especially since a music-based project he took on more than three years ago has transformed the course of his academic career at Cal State San Marcos.

Griser was a junior majoring in psychology in the spring of 2015 when, as part of a field experience class, he began working on a service learning project in which he tested the notion that listening to customized music playlists improves the mood of dementia patients. Now he’s in his third year of a master’s psychology program at CSUSM and, for his thesis, he’s taking that initial research a step further – does so-called music intervention also better the quality of life of the family members responsible for the care of those dementia patients?

“We know that family caregivers are often the most stressed-out people you could ever imagine, which is why I chose them,” Sean said. “This intervention is a good one because I have experience with it and because it has shown to be really effective and simple to implement as well.”

Sean says his family has no history of dementia that caused him to be interested in the condition and its treatment. Rather, he first was exposed to the concept of music intervention when he saw, in a psychology class, “Alive Inside: A Story of Music and Memory,” a 2014 documentary that showcases the restorative effects of music therapy on elderly people suffering from Alzheimer’s disease.

That film sprang back to his mind when he started his 80 hours of service learning work at Sunshine Care, a Poway assisted living facility that specializes in dementia memory care programs. In conjunction with Lisa Lipsey, the facility’s activities director, Sean came up with the idea of loading music onto iPods and seeing its impact on patients.

First, he toured the facility and interviewed as many of the almost 100 patients who would talk to him, quizzing them about their favorite artists (Glenn Miller, Lawrence Welk and Frank Sinatra were among the favorites, along with old show tunes and gospel hymns). Then he made individual playlists ranging from 20 minutes to an hour that he put on used iPods or iPhones that were donated by family members or staff.

Finally, he sat back and observed the results.

“The coolest thing was the immediate impact it had where they would start singing,” Sean said. “Even when we were just talking about music, they would bring up old stories from when they were, like, 20. One guy was a Marine who joined right after Pearl Harbor, and he was telling me all these amazing stories from the war. Sometimes people would cry.

“I don’t think they had heard music for such a long time, and it’s such an integral part of your life. It was cool to see them come alive.” 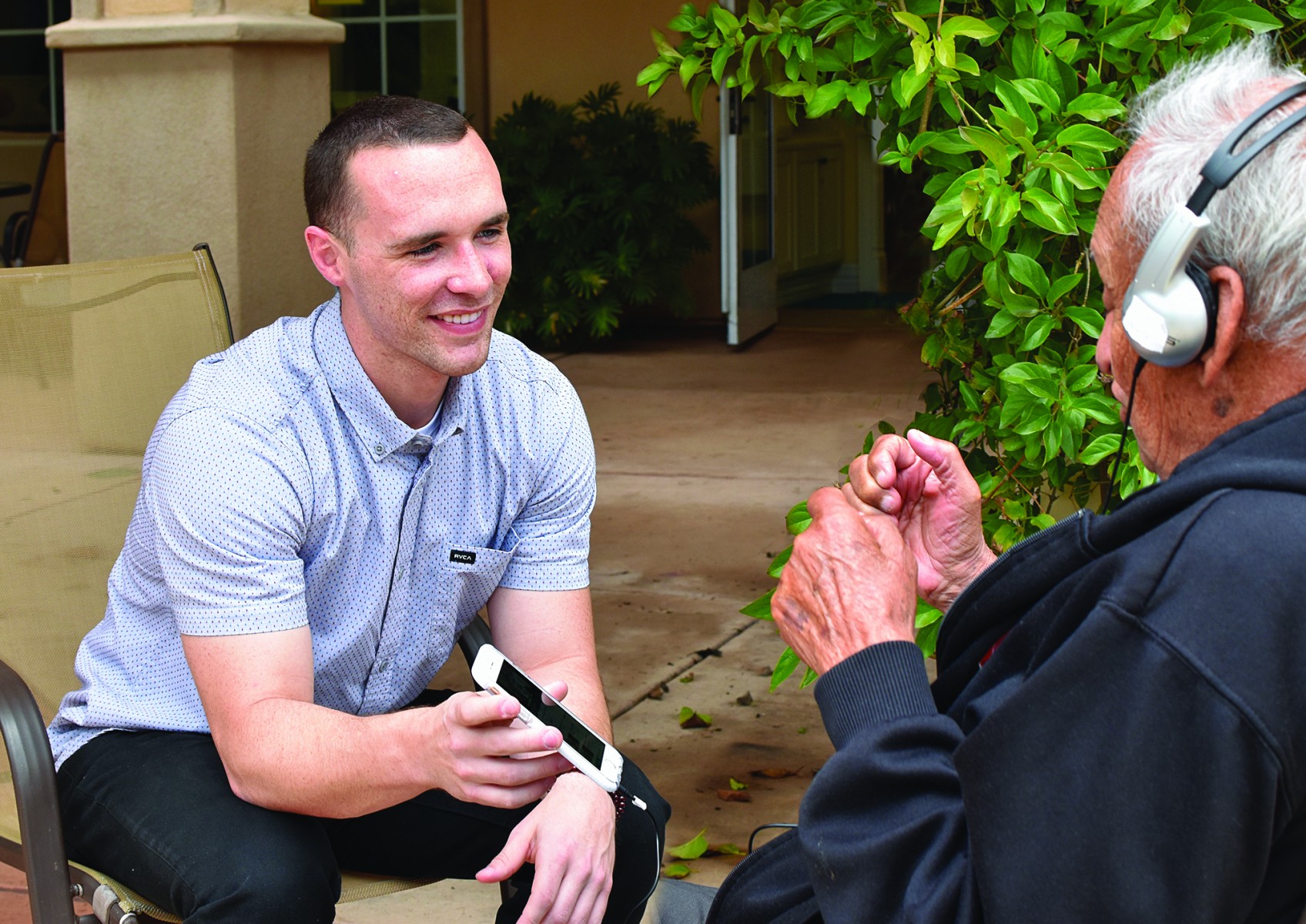 Sean’s work at Sunshine Care earned him an award as CSUSM’s service learning student of the year in 2015, and it also planted a seed for future research. Last month, he successfully proposed his thesis, under the direction of his faculty adviser, Sharon Hamill, focusing more on the caregiver side of the equation than the patient.

“Having been a caregiver, and that’s my area of research, there’s a recognition that caregivers only do as well as the patient,” said Hamill, a psychology professor and the faculty director of the CSU Institute for Palliative Care at CSUSM. “If the patient is having a good day, everybody’s having a good day, and if they’re not, nobody is. So if we can do things that help patients have a good day, there should be clear benefits.”

For his study, which he expects to start later this semester and finish in the spring, Sean will track 40 pairs of people (patient and caregiver) over a four-week period during which he will provide personalized music and the caregiver will respond to surveys about how the intervention affects the demeanor of the patient and, in turn, the well-being of the caregiver.

“He has done a phenomenal job,” Hamill said. “He has a passion for what we could do for these people who might be caregiving for years and years – how can we help them to have a good quality of life, how can we support them? It’s been fascinating to watch something that he kind of happened across and how he has become more and more focused.”

For Sean, the accidental nature of his academic pursuit doesn’t make it any less meaningful to him.

“There’s this idea that we kind of put dementia patients in a home and leave them,” he said. “But it is worth your time to actually go out and spend time with them. They can still talk, and they’re still people.

“This has been an all-around experience of growth for me.”