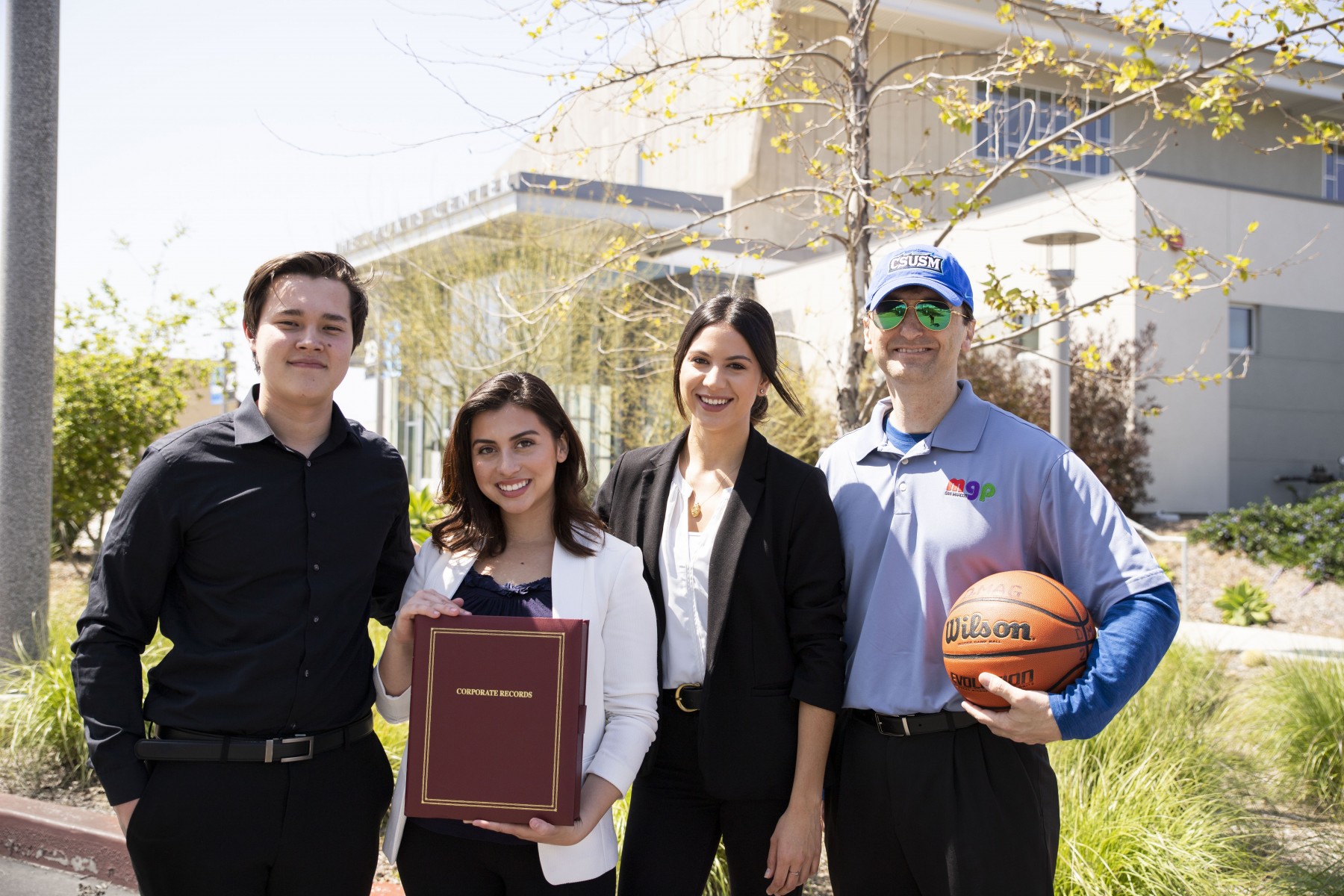 Senior Experience
Dimitris Magemeneas (far right), an Executive in Residence in the College of Business Administration, has enlisted a CSUSM Senior Experience team to help with his Mega GamePlex project. Photo by Andrew Reed

Nearly every season, the San Marcos Youth Basketball League has to turn away more than 100 excited but ultimately disappointed athletes because there aren’t enough courts.

When the City of San Marcos recently updated its Master Parks & Rec Plan for the first time in nearly 30 years, one of the main recommendations was to construct a multi-use facility. However, the city does not have the tens of millions of dollars needed to build one.

This is where Dimitris Magemeneas – an Executive in Residence in the College of Business Administration at Cal State San Marcos – and a dedicated group of CSUSM students are trying to help.

Magemeneas is leading a group that hopes to bring to San Marcos a project they’re calling Mega GamePlex (MGP). It’s being designed as a massive indoor recreation facility that would host youth and adult sports leagues and large tournaments as well as trade shows, industry conventions, charity fundraisers and community events.

“For youth, playing in team sports teaches many useful life lessons,” Magemeneas said. “For example, the importance of placing team goals ahead of individual desires and how to manage common conflicts that naturally arise between players. Playing sports also develops mental toughness for overcoming adversity toward achieving goals. The healthy personal habits of exercise and playfulness can also continue throughout an entire lifetime. What better place to build a sports complex to enhance life skills development than in San Marcos, the educational hub of North County?"

The leadership team is led by Magemeneas, who in addition to his duties as an adjunct professor at CSUSM is the regional managing director of Kingsview Asset Management. Michael Winter and Sonny Mathew also serve on the Board of Directors for MGP.

One of the key components to the development of the project has been the involvement of the CSUSM students in the Senior Experience Program in the College of Business Administration.

Since 2015, with the help of different student teams in the Senior Experience Program, MGP has paid for and completed four projects – a feasibility study, marketing development, fundraising development and, in 2018-19, a fundraising schedule.

This year’s volunteer student group is led by Desiree Godinez, who serves as MGP’s 2019 executive director. Godinez is a fourth-year communication major at CSUSM.

“I am glad to be a part of MGP because the values that MGP stand for are ones that I identify with,” said Desiree, who leads monthly team meetings, organizes fundraisers, recruits volunteers, calls donors and runs point on the social media efforts. “The San Marcos Mega GamePlex promotes healthy living and bringing the community together. Growing up in Glendora, my town had a sports/entertainment center just like MGP’s called the Crowther Teen & Family Center. I was able to turn to this facility for free after-school fun like basketball, racquetball, tennis, movies and more.

“Moreover, when Dimitris explained his mission to me, it brought back those happy memories and friends I have made through the Crowther Teen & Family Center. The center was a safe and fun place for me to turn to and I would love to be able to help provide that to some other kids sometime in the near future, too.”

Godinez is no stranger to the development of important projects on campus. As a freshman, she started the CSUSM Cheer Team. Two years and an impressive amount of fundraising later, the cheer team earned official status as a team in the athletic department.

Her Senior Experience team also includes business administration major Jan Pryor and Christina Gawrych, a marketing major in her final semester. Their goal is to raise $20,000 this year.

“The most rewarding part about my role is working with such an amazing team,” said Godinez, who just signed with an agency in hopes of pursuing acting full-time following graduation. “My team makes my job easier. Everyone has something to add. It is an inclusive atmosphere and everyone has some kind of knowledge to bring to the table. We all serve as resources for one another, and I am proud to be on this team with these individuals.”

MGP earned status as a 501c3 nonprofit charity in 2017. The group has estimated that it will cost $5-7 million to convert an existing building, or $20-30 million to build from the ground up. Its website is an all-encompassing landing place for information, FAQs and ways to volunteer and donate.

With the help of a team of talented and creative CSUSM students, the goal is to open the doors in summer 2021.

“Not once have we ever heard from a student why MGP can’t be done,” Magemeneas said. “Rather, across all four projects, students have surprised us with innovative ideas to carry the vision forward. The first team created a layout rendering at no cost using campus resources. The second team created professional-grade promotional videos. The third team suggested and implemented a MailChimp database for supporters. And the most recent team created a very detailed 2019 fundraising plan that far exceeded our expectations.

“The primary impact of CSUSM students has been their ambition.”