Diego Sustaita was familiar with the behavior of shrikes.

Watching from a distance, he could see the bird dive after its prey and then return with the prey in its mouth, soon to be impaled.

It was what happens in between that time, from the point of the attack to returning with the prey, that intrigued Sustaita.

Not only has Sustaita discovered some answers to that question, but the results of his research have been published in Biology Letters, a peer-reviewed scientific journal that publishes high-quality papers from across the biological sciences. 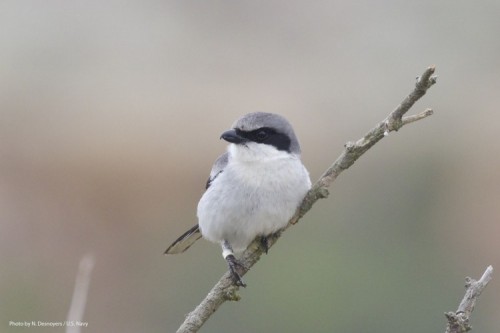 “I had never seen shrike attacks that up close and personal before, so the whole thing was a new, exciting experience to witness how they do what they do,” said Sustaita, an assistant professor of biological sciences at Cal State San Marcos.

Sustaita’s interest in predatory birds began as a child growing up near Woodland Hills, north of Los Angeles. His backyard abutted a state park with open land and myriad opportunities to observe hawks and other birds.

Drawn to the power of predatory birds like hawks and falcons, Sustaita wanted to learn more about the biomechanics of their abilities. For his Ph.D. dissertation at the University of Connecticut, Sustaita chose to focus on shrikes in conjunction with his adviser, Margaret A. Rubega, who became a co-author on the paper published in Biology Letters. Susan M. Farabaugh, the associate director of recovery ecology for San Diego Zoo Global, was also a co-author.

Shrikes are small predatory songbirds known for impaling their prey. While birds in general can focus on a wide variety of foods -- from insects or vertebrates to seeds and fruits -- these feeding specialties are associated with certain types of beaks that are more efficient for particular food types. However, Sustaita notes that shrikes are able to eat both insects and small animals effectively with their beak shape.

Though shrikes are small – Sustaita compares the weight of a shrike to that of a Hershey Bar – they are able to catch and kill animals as large or even larger.

The research was conducted on San Clemente Island in a collaboration with the San Diego Zoo Global Institute for Conservation Research and the U.S. Navy, which operates the island.

The zoo and Navy have worked together to breed an endangered subspecies of shrike and release it back to the island as part of a shrike recovery program. The birds are fed live prey as part of the process of ensuring that they are prepared for release, and Sustaita’s team was allowed to set up high-speed cameras to capture video of shrikes attacking their prey.

“This behavior happens so quickly,” Sustaita said. “You can catch glimpses of it with the naked eye and you can kind of see what they’re doing, but you don’t understand the intricacies until you actually slow things down and see what happens, literally bite by bite by bite.

“I commend the zoo and the Navy on their willingness to undertake this. They have a mandate for the conservation of this endangered subspecies. They breed them, and they have a fantastic operation. We came in with this request to learn a little bit more, and their response was entirely positive. The more you learn about an organism’s natural history, the better you can manage and hopefully conserve that species. We were happy to strike up this partnership that benefits everybody.”

One of the most surprising aspects of the research results for Sustaita was learning how fast the shrikes work, grabbing prey by the neck and shaking it violently nearly a dozen times in a second to kill it.

“It’s the blink of an eye,” he said, “the attack, the head-shaking behavior and then they’re done, they’re off.

“You really get an appreciation for the sheer force of these little birds, the vigor with which they attack and kill their prey. It’s amazing.”