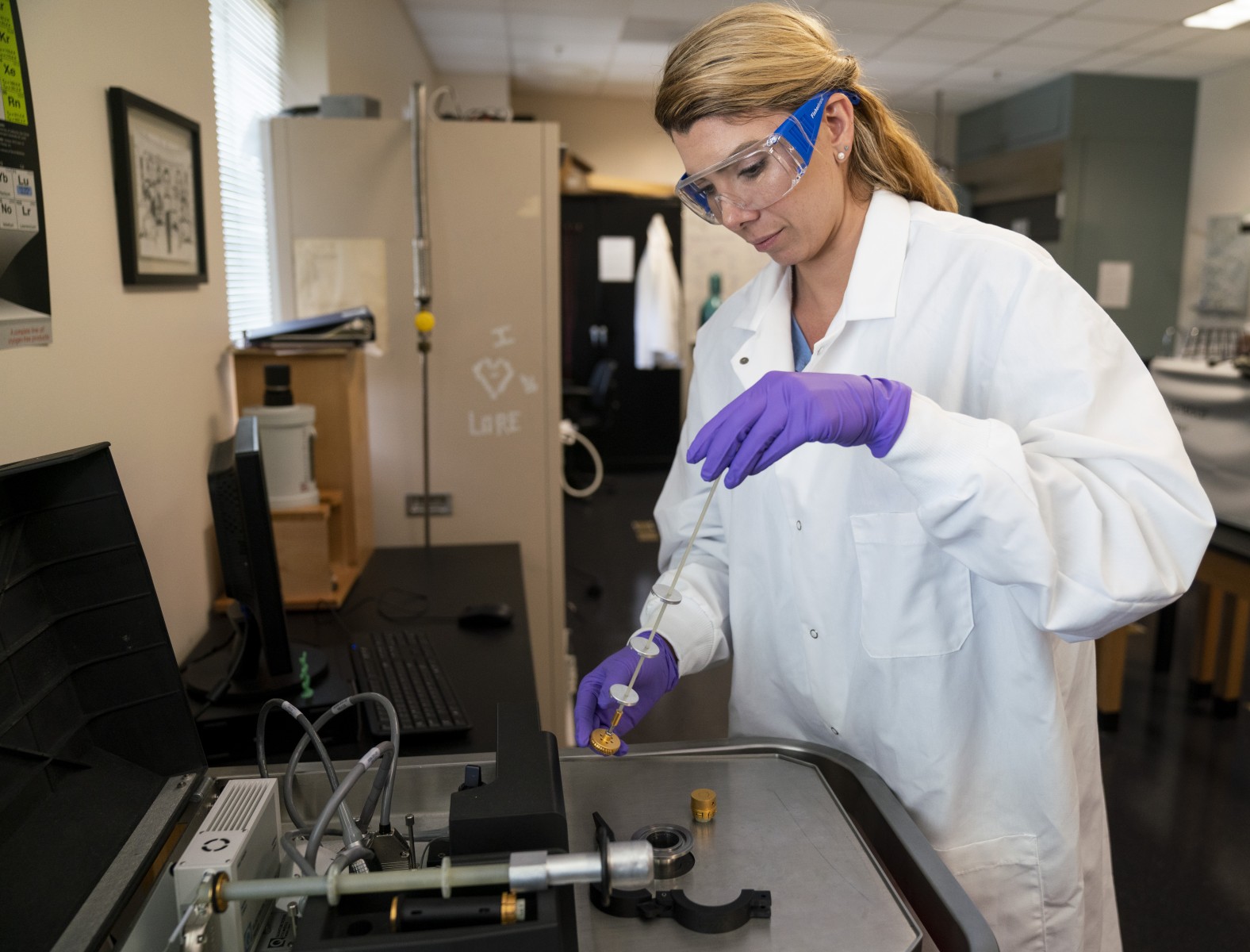 Though Silvia is grateful for a strong support system of friends in North County, it’s still challenging being a single mom attending school full time, working multiple jobs and caring for a son with spastic quadriplegia, a severe form of cerebral palsy.

But Silvia never thinks about moving back to Colombia.

“I made a life here, and I feel like I can be successful with what I'm doing here,” Silvia said. “Here, there's so many opportunities for research and you can do world-class things, revolutionize, if you will. In the U.S., the opportunities are endless.”

For Silvia, one of those opportunities included a prestigious workshop at Princeton University in July. Silvia and fellow CSUSM physics student Mireya Juarez were among 20 students from throughout the country selected to participate in the Princeton Plasma Physics Laboratory (PPPL) Undergraduate Workshop in Plasma Physics. The four-day workshop provided students an overview of plasma physics, fusion and the research done at PPPL, which is a collaborative national center for fusion energy research that is managed by Princeton.

Silvia and Mireya joined other participants in attending lectures and conducting experiments. The program is designed to encourage women and people from underrepresented backgrounds to consider a career in physics. It was particularly inspiring for Silvia that the program was led by a fellow Colombian, Arturo Dominguez, who is a science education senior program leader at the PPPL.

“It was cool to see somebody and to meet somebody that is also Colombian that succeeded and is at Princeton,” she said. “I thought, ‘If he did it, then I can probably do it, too.’ ” 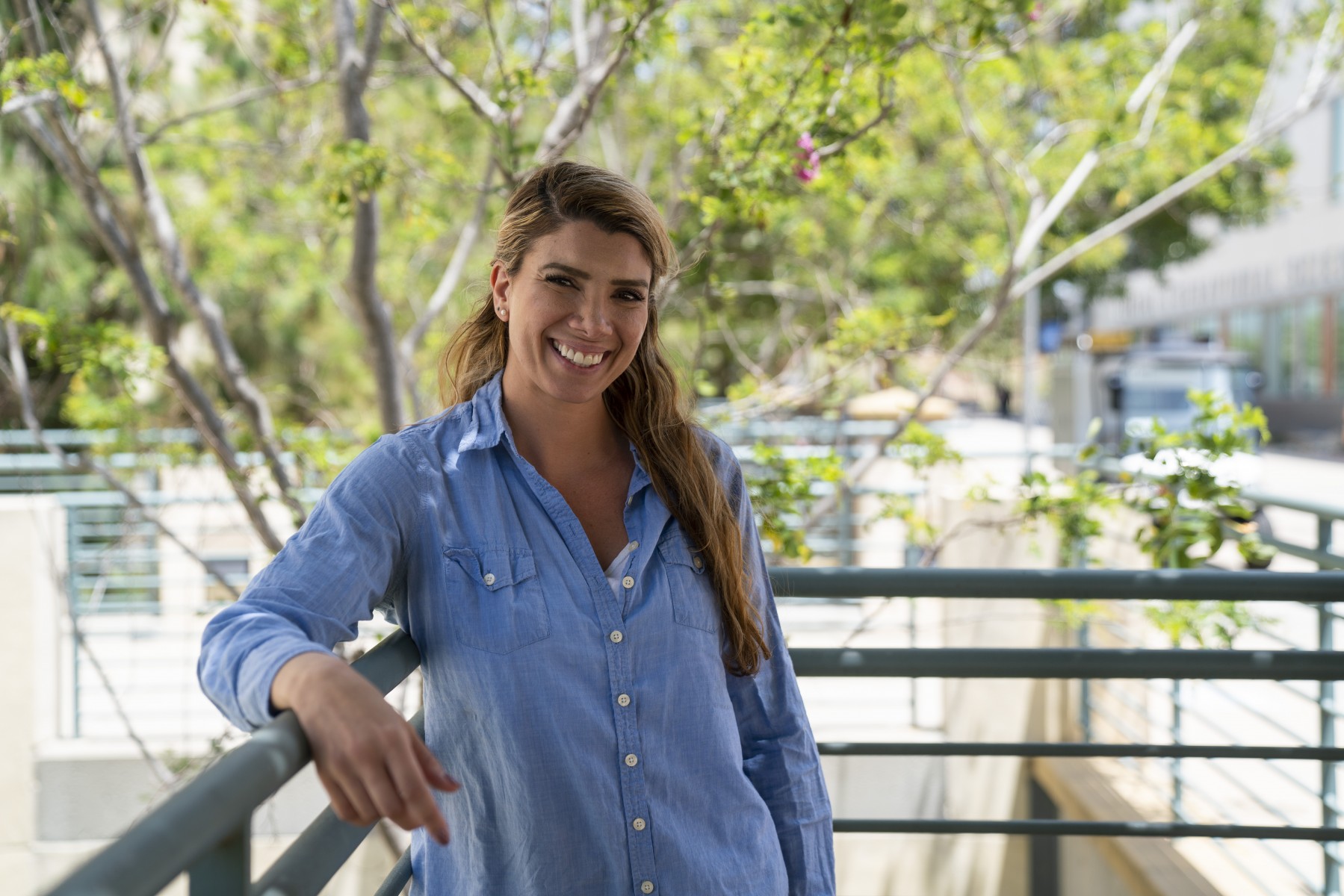 Silvia Sherman plans to pursue a master's in mechanical engineering after graduating from CSUSM with a bachelor's in physics next May.
Photo by Chandler Oriente

The road to becoming a scientist has been an unexpected journey for Silvia, who earned a degree while studying physiotherapy at Universidad del Rosario in her native Colombia more than a decade ago. She worked as a physical therapist in Colombia before moving to the United States in 2009 with her now ex-husband, a Marine who was stationed at the U.S. Embassy in Bogotá.

The extensive process to practice physical therapy in the U.S., coupled with Silvia’s waning interest in the field, led her to consider returning to school. She always had a passion for science and was intrigued by a career in engineering.

But it wasn’t an easy decision. She would essentially be starting from scratch after years of experience in the health-care field. There were her son’s health challenges to consider. And starting over in her 30s seemed daunting.

It was a conversation with her mom that helped convince Silvia to make the change.

“She said, ‘What makes you happy? Because that’s what it’s about. Life is about being happy,’ ” Silvia said. “I said, ‘I want to be a scientist. I want to work in engineering.’ And she said, ‘Go for it.’

“My family was really supportive, and that made it easier.”

Silvia earned her associate degree at MiraCosta College and transferred to CSUSM for fall 2018. Now 37, Silvia has embraced the age gap between her and most of her classmates. Many have a difficult time believing that she’s nearly two decades older than them. One classmate even requested to see her ID because they didn’t believe she was that much older. And she said her maternal instincts often kick in when it comes to her classmates, just as it did at the PPPL workshop.

“I am very protective of the younger crowd and I’ve always tried to be a mentor. If I know something that they don’t know or if they’re looking for guidance, I’m really happy to help because I didn’t really have that when I was in school back in Colombia.” 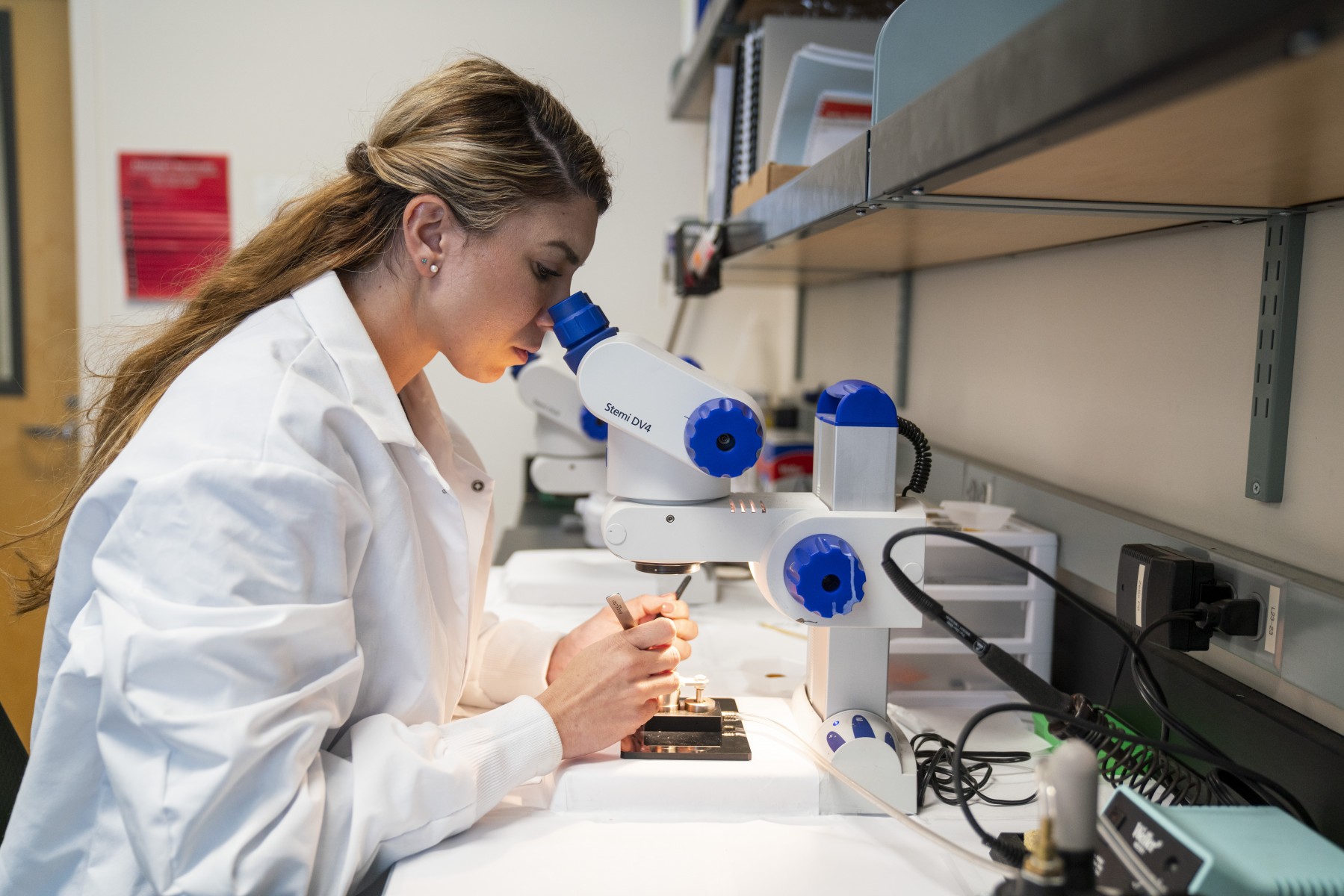 Silvia Sherman is working in the lab of physics professor Stephen Tsui this summer as a member of CSUSM's Summer Scholars program.
Photo by Chandler Oriente

Silvia makes time for her classmates despite her myriad commitments. In addition to her full-times studies, she is part of CSUSM’s Summer Scholars program working in the lab of physics professor Stephen Tsui, a math facilitator for the university’s Readiness and Success program and a math tutor at MiraCosta College.

Tsui first learned of Silvia through fellow physics professor Chuck De Leone, who thought she would be a good fit for Tsui’s lab. Then Tsui saw her work firsthand last spring when she took his advanced lab course.

“She was very focused in the lab course,” Tsui said. “They work in groups, and there were times when she was the one in her group helping to keep people on task because her grade was important to her.”

Silvia’s success in the class helped her get selected to work under Tsui during Summer Scholars, a 10-week program that pairs a student with a faculty mentor to gain hands-on research experience. Silvia is spending 20 hours a week in the lab this summer examining the heat capacity properties of the mineral magnetite and will present her work during the Summer Scholars Poster Showcase on Aug. 8.

But her top priority is Matthew, her 7-year-old son who has been at Rady Children’s Hospital’s rehabilitation wing since 2015.

Silvia commutes multiple times each week from her Vista home to Rady in San Diego to be with Matthew, and she spends many late nights there studying while he sleeps.

“She’s very driven,” Tsui said. “It’s not just for her. What she’s doing is for her and her son. Her dream one day is to be in mechanical engineering. After she’s done here, I think she’ll be able to go on to whatever she wants to do, and she’ll be great at it.”

Silvia will graduate in May and plans to pursue a master’s in mechanical engineering at UC San Diego. Leaving San Diego County for her master’s isn’t an option because she wants to ensure that Matthew continues receiving the care he needs at Rady.

“It’s been a journey,” Silvia said. “I’m proud of what I have done thus far. With all the effort that I have put in my academics and in life so far, I’m starting to see that it’s finally paying off. It’s a good feeling.

“The university is so supportive of students like me. The faculty members of the physics department, my peers, everybody is just amazing. This is an amazing university. I’m proud to be here.”