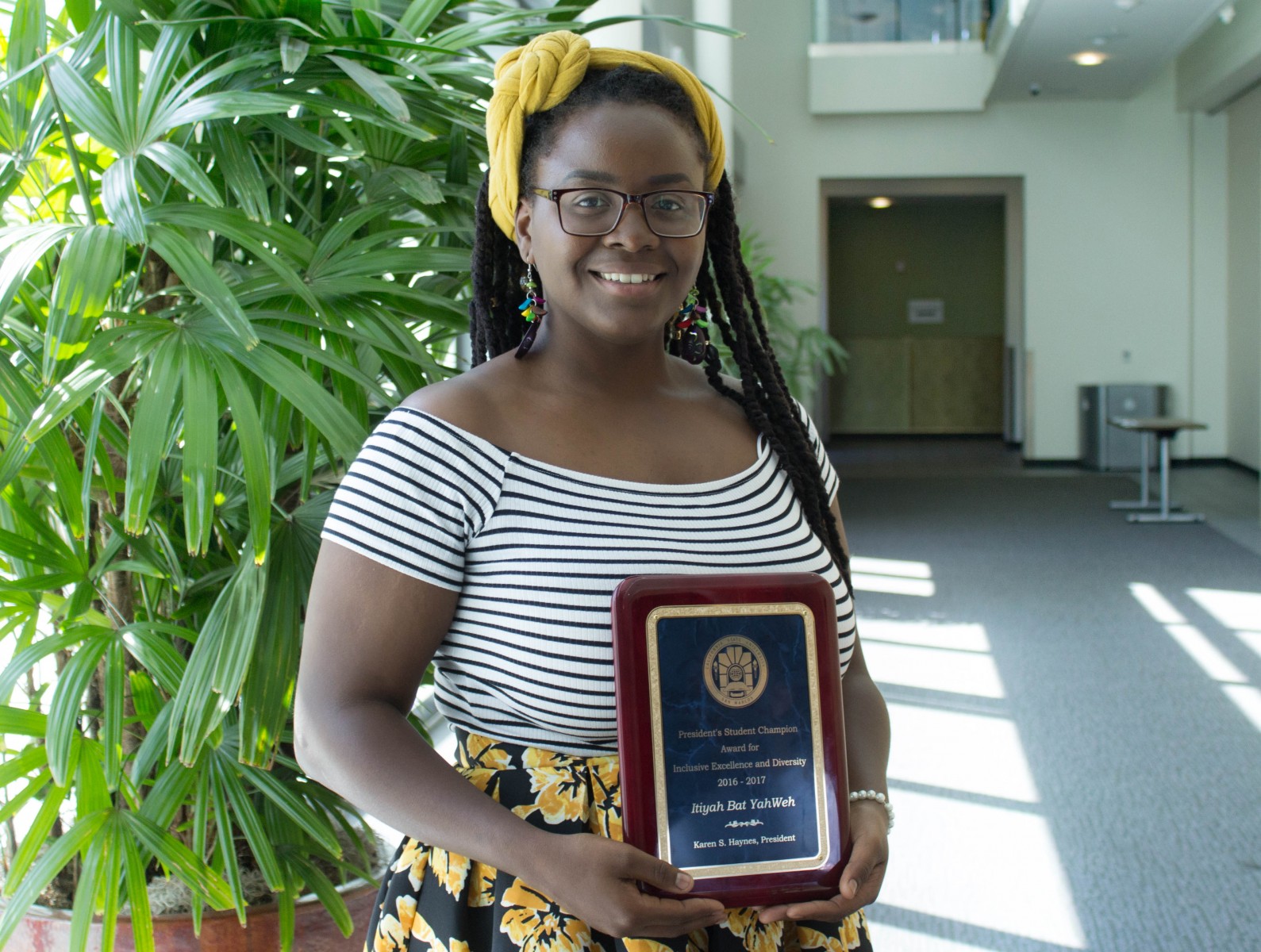 Now in her third year at Cal State San Marcos, Brandy was close to joining the military before her mom stepped in and encouraged her to try school first.

Looking at a list of Brandy’s accomplishments at CSUSM, it’s difficult to imagine her not being part of the Cougar family.

From Alpha Lambda Delta to the Social Justice Summit to the Black Student Union, Brandy has participated in countless clubs and activities.

“I love a lot of things and I like trying things,” said Brandy, who is a sociology major.

Social justice issues are of particular interest to Brandy, and her activism led to her being awarded the President’s Student Champion Award for Inclusive Excellence and Diversity during the All People’s Luncheon on Oct. 25.

“Brandy understands the importance of her peers breaking down the barriers that keep them from working together and learning from each other,” said Robert Aiello-Hauser, CSUSM’s director of Student Engagement and Inclusion.

Brandy was among a group of CSUSM students who advocated for the creation of the Black Student Center on campus, work that will come to fruition with the grand opening of a dedicated space later this academic year.

Brandy’s interest in trying and participating in a variety of activities stems from her experience moving frequently while growing up. Even an A-frame on campus doesn’t escape her eyes, often leading to an impromptu visit to a lecture or event. That’s how she happened upon a lecture featuring a mother talking about her child living with autism.

“I stayed because I didn’t know anything about autism,” Brandy said. “I cried. It was so beautiful and so inspirational.”

Brandy has overcome many challenges of her own growing up, from financial difficulties to contending with learning disabilities. She learned at an early age the importance of asking for help in order to succeed.

Brandy credits her mother for getting her prepared for college, often taking action that Brandy didn’t learn about until years later. Her mom insisted that Brandy receive an Individualized Education Program and worked with Brandy’s teachers to ensure she received any necessary help to deal with her learning disabilities.

“My mom is the reason why I’m here,” Brandy said.

Brandy chose to attend CSUSM sight unseen. While she had no concerns about attending a school she hadn’t visited, she was a bit surprised the first time she arrived on campus with her mom for orientation.

But even the stairs are a positive in her mind as she notes that they provide a good workout when needed. And, despite not seeing the campus before she committed to attend CSUSM, she never had any concerns about whether it would be the right fit.

Brandy quickly built a village of people at CSUSM who could provide support and advice. And, of course, she dived right in when it came to getting involved.

Brandy doesn’t want to limit herself when it comes to finding a post-college career. However, she said she will always be a voice for groups that are being oppressed and she wants to have a role in education.

“I want to be that one teacher where kids look back and say, ‘If it had not been for Ms. Williams …’ I want to be the professor that kids say, ‘She believed in me.’ ” 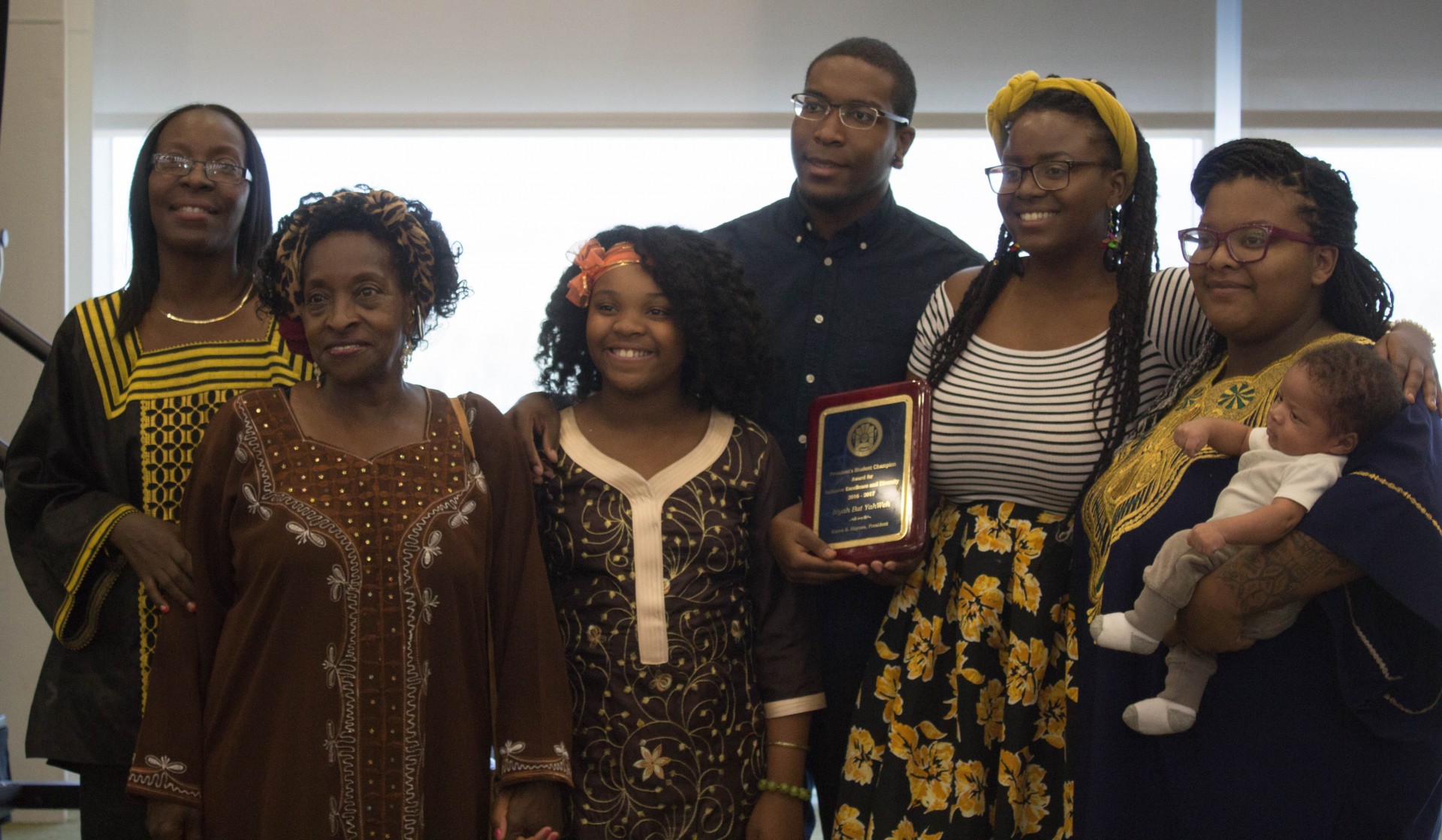