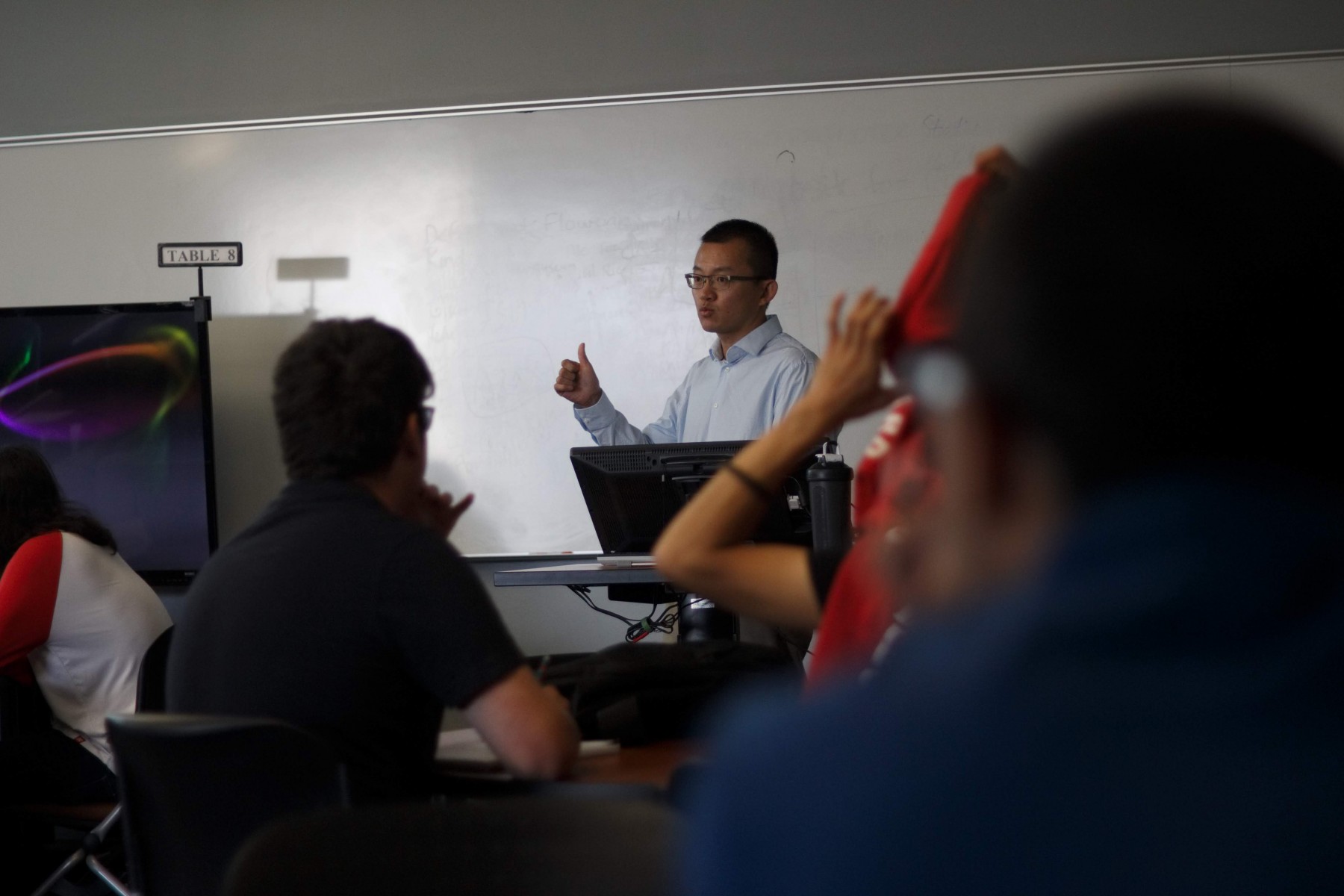 Dr. Yongjie Zheng
One of two founding engineering faculty at CSUSM, Yongjie Zheng has been working on the curriculum and outreach since this past summer. Photo by Alex Lamadrid

Zheng is one of the program’s first two faculty members, and he has been working on the curriculum and outreach since this past summer. The other inaugural faculty member, Dr. Simon Fan, arrives in January.

“There are an increasing number of universities in the country that have an independent software engineering program, and this is a great opportunity to have an impact on building something new,” Zheng said. “We held outreach workshops, and current students will enroll in upper-division software engineering courses next year. We’re also generating interest from students looking at transferring here from the community colleges.”

CSUSM launched its Bachelor of Science degree program in software engineering thanks to a $6 million Hispanic-Serving Institutions STEM grant from the U.S. Department of Education, a $1.5 million donation from Carlsbad-based communications company Viasat and its employees, and a $100,000 gift from San Marcos-based Hunter Industries. The donation is funding the renovation of laboratories and classrooms, purchasing new engineering equipment and instrumentation, and supporting faculty and student work. Construction of a new CSUSM Viasat Engineering Pavilion is now underway.

“Software engineering is a rapidly developing field in which many new software methods and tools are being created,” Zheng said. “It is essential to keep up with the latest research and be able to quickly adapt the latest research into your curriculum. That certainly presents a challenge, but it also provides opportunity. We are excited about the possibilities.”

Zheng’s research interests include software engineering, software architecture, software product lines, and self-adaptive software systems. One of his recent papers (52 pages) titled “Maintaining Architecture-Implementation Conformance to Support Architecture Centrality: From Single System to Product Line Development” was published by the "ACM Transactions on Software Engineering and Methodology," a flagship software engineering journal. Zheng has published in several journals, and he has presented at a dozen conference proceedings and workshops across the globe.

“I started working on the software engineering research when I was a Ph.D. student at the University of California, Irvine,” Zheng said. “I joined a world-class research group – where the REST architecture style was born – led by my Ph.D. adviser, Professor Richard N. Taylor. I had opportunities to work on some exciting research projects on software architecture. I realized my passion lies in software engineering.”

Zheng launched his career in 2001 as a software engineer at the IBM China Software Development Lab in Shanghai, China.

“I wanted to have industry experience before I pursued my education at graduate school,” he said.

Zheng noted he is one of several people who are working on the software engineering program. CSUSM Drs. Ricardo Fierro, Youwen Ouyang, Fan, Stephen Tsui and Anna Woodcock, along with CSUSM’s Jeffrey Morales and Cal Poly San Luis Obispo’s Dr. David Janzen, are among the many others.

“Just like the field of software engineering itself, this has been a team effort,” Zheng said. “Collaboration is vital.”