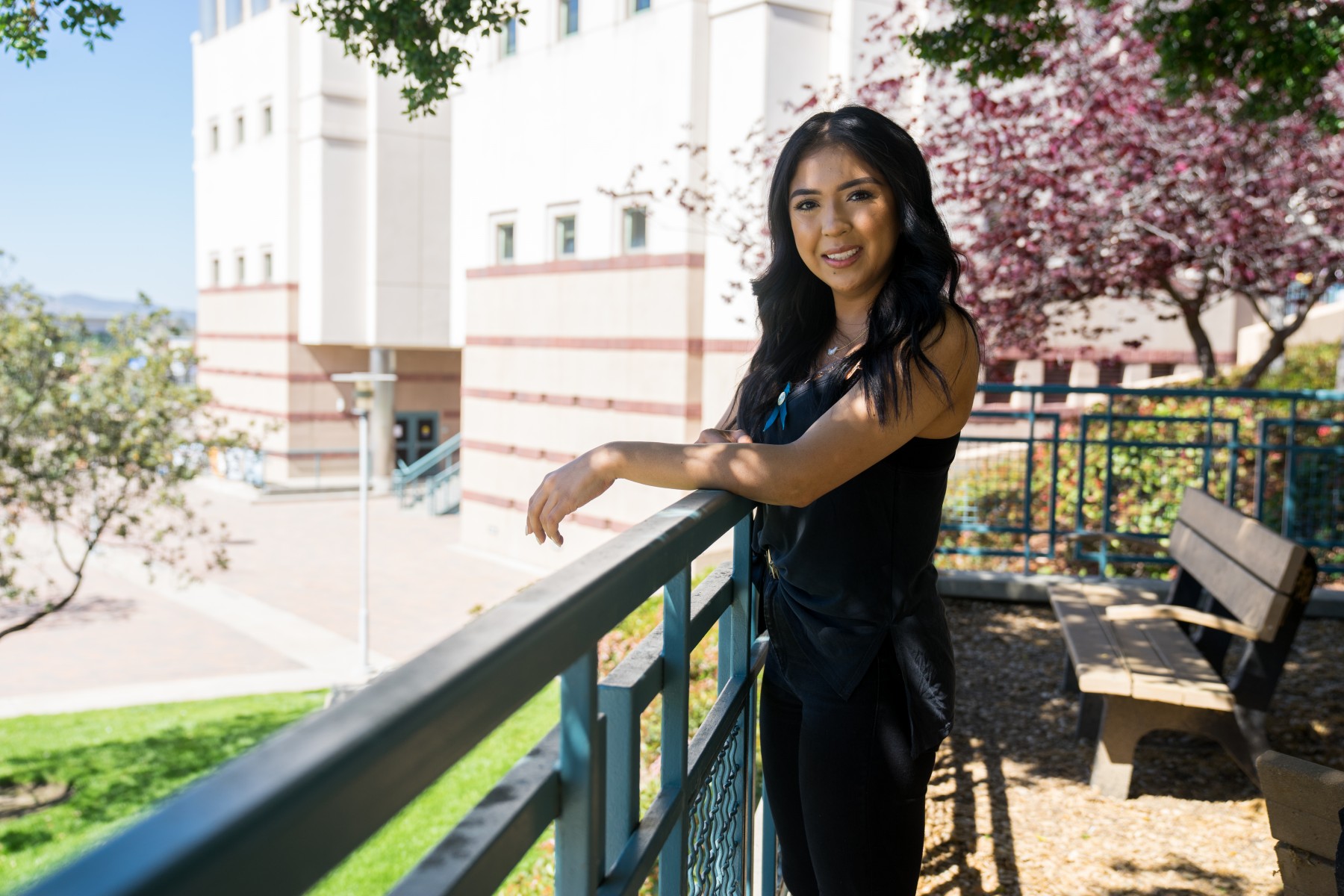 It’s not the needles that bother Stephanie Gonzalez. It’s watching the nurses struggle to find a vein.

“When I see people now, I always stare at their veins and think, ‘Wow, you have nice veins,’ ” Stephanie said. “It’s the little things.”

Stephanie is able to find humor in the little things, particularly since learning in June 2017 that she has myasthenia gravis, a rare chronic autoimmune neuromuscular disease that causes severe muscle weakness.

The disease affects everyone differently. Some people have trouble walking. Some can’t lift their arms. In Stephanie’s case, it hinders muscles in her mouth and throat, causing difficulty breathing, eating, even taking a sip of water.

There is no cure for myasthenia gravis, and it has taken numerous attempts to find treatments that mitigate Stephanie’s symptoms. The most effective has been intravenous immunoglobulin (IVIg), a plasma treatment given every five weeks.

As Stephanie approaches graduation from Cal State San Marcos this month, her routine has been the same throughout the spring semester. When it’s time for her IVIg, she attends class Thursday morning, skips her afternoon class to make the two-hour drive from CSUSM to her home in Whittier, and makes sure she is situated by 2 p.m. so a nurse can find a vein to begin the five-hour procedure.

Stephanie stays home to receive IVIg plasma treatments again on Friday, Saturday and Sunday. She was able to arrange her spring school schedule so that she doesn’t have class on Mondays, allowing her a full day to recover before returning to CSUSM in time for classes Tuesday.

“I tried to keep it quiet because I didn’t want people knowing that I have this,” she said. “But I understand now that I should help bring awareness to it because it’s so rare and we need more funding for research and new medications.”

Stephanie had just celebrated her 21st birthday when she was diagnosed. Toward the end of the spring 2017 semester, she started noticing little changes. Her smile wasn’t quite the same. She was having difficulty eating.

She visited her dentist thinking she might have temporomandibular joint syndrome, better known as TMJ, or some other issue with her jaw. When the dentist told her everything looked normal, she tried a chiropractor, who realigned her neck.

The symptoms didn’t subside, but they also weren’t debilitating at that point. When the semester ended, Stephanie joined the rest of her family for their annual trip to Yosemite National Park. She didn’t know it at the time, but higher elevation can exacerbate her symptoms. She participated in bike rides and hikes, but she slowly started losing the ability to speak and struggled to eat or drink.

By the time the family returned to Whittier, Stephanie had to go to the emergency room. Doctors thought she might have had a stroke, but the tests came back negative. They couldn’t determine any other cause of the symptoms and recommended that she see a neurologist.

Stephanie was put through a battery of tests before the diagnosis was made. She had never heard of myasthenia gravis, so she figured it couldn’t be too bad. She quickly learned otherwise.

For people like Stephanie, whose mouth and throat muscles are affected, there is the danger of myasthenic crisis, a life-threatening condition that requires intubation so the patient can breathe.

While Stephanie has avoided that, it was terrifying for her mother, Margarita Gonzalez, to see her daughter struggling to swallow a few drops of water.

“It was such a difficult time,” Margarita said, “but we found the best doctor. He's been an angel for us.” 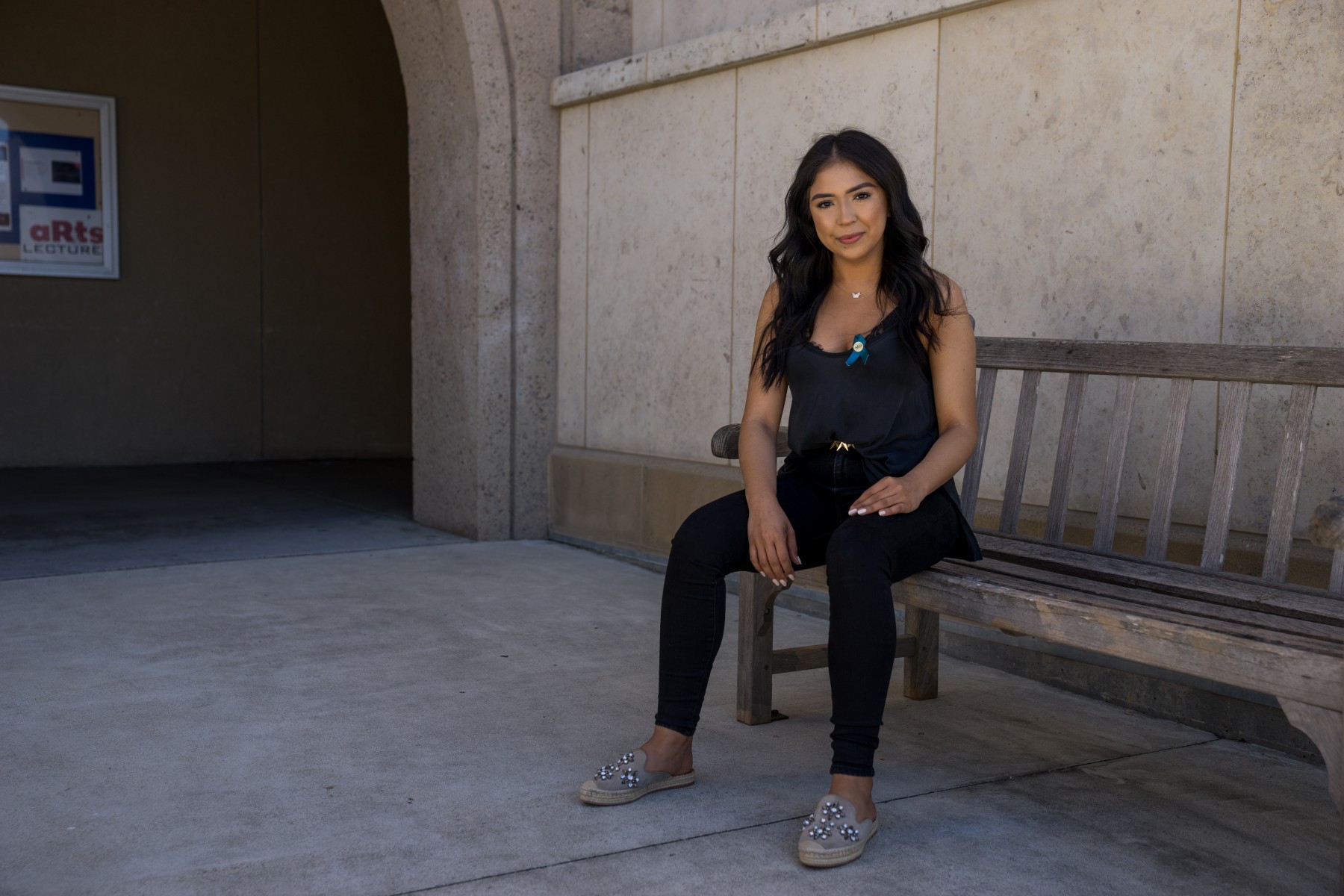 Stephanie went through IVIg treatments throughout the summer of 2017. By August, she was feeling like her old self. Her difficulties speaking, eating and drinking had disappeared.

Margarita felt otherwise. It hadn’t even been three full months since Stephanie’s diagnosis. Margarita relented only when Stephanie agreed to take a lighter class load and return home for treatments and doctor’s appointments.

While disappointed that she might need an extra semester to graduate, Stephanie was happy to return to campus. But as the semester progressed, her symptoms returned. By the end of the fall term, she couldn’t speak. The plasma treatments were no longer helping. Her doctor recommended a surgical procedure to remove her thymus, a gland in the upper part of the chest that sometimes is abnormally large in people with myasthenia gravis.

The surgery was scheduled for the end of January 2018, and Stephanie wanted the date moved up so she could return to CSUSM in time for the spring semester. Stephanie even contemplated postponing the surgery after doctors told her the recovery time wouldn’t allow her to return to school in the spring. But with her family and doctors emphasizing the importance of getting it done as soon as possible, she reluctantly agreed to miss the spring semester and further delay her graduation.

A procedure that was estimated to last two hours took six. Stephanie spent several days in the ICU to ensure that she didn’t have a myasthenic crisis and several more days in the hospital for observation.

It’s too soon to know if the surgery will make a long-lasting impact – it typically takes 12-18 months for patients to start seeing results – but Stephanie has been doing well managing her symptoms since the procedure. 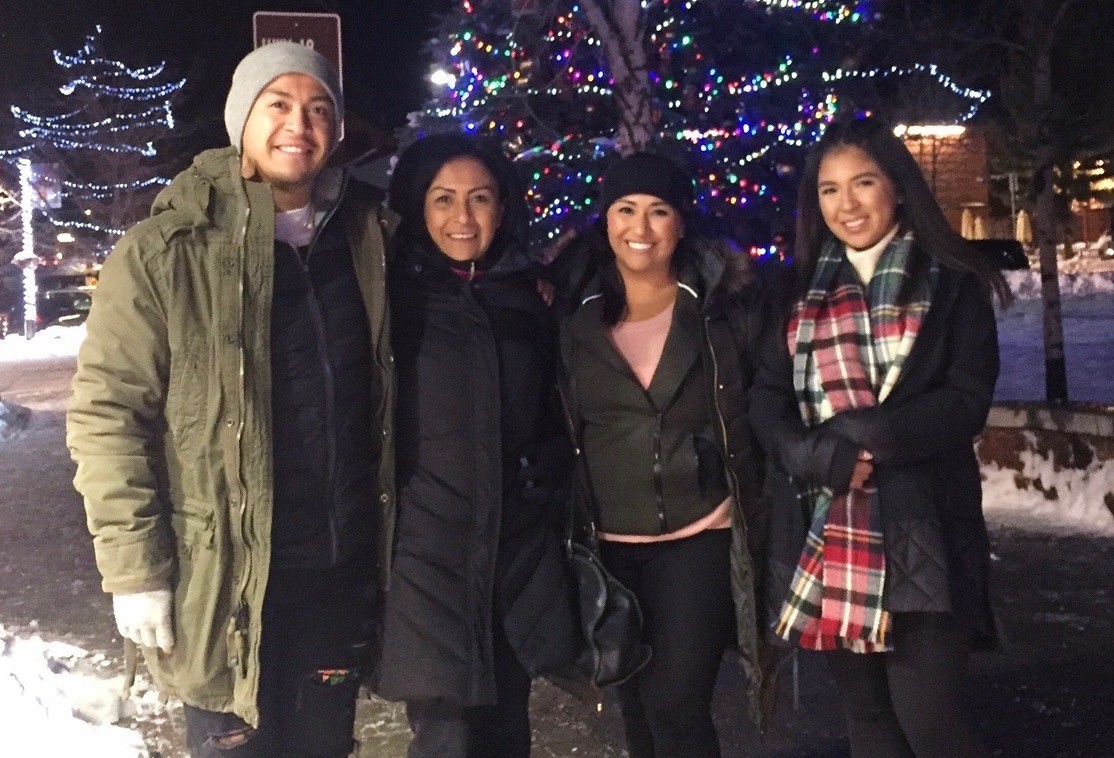 The Gonzalez Family
Stephanie Gonzalez has relied heavily on the support of her mother, Margarita, and her siblings, Jimmy and Janette, as she has battled myasthenia gravis.
“

Everyone has their own pace, their own story and what they’ve done to get through it.

Missing the spring semester meant missing a few key classes. Without those prerequisites, it would have further delayed Stephanie’s graduation. She credits psychology professor Sara Bufferd and academic adviser Benita Ramirez for ensuring that she remained on track.

Bufferd assisted Stephanie in getting approval to take two required classes at Cal State Fullerton during the summer, and she continued working closely with Stephanie in the fall. Ramirez worked with Stephanie to make sure there were no issues in transferring her grades from Fullerton to CSUSM while also helping her arrange her class schedule to best meet her health needs.

“I have always admired Stephanie’s optimism and strong will,” Ramirez said. “She has done everything possible to accomplish her goal, from taking major courses at another university to not taking a break over the summer. I am so proud of her.”

Stephanie has an older brother and sister, but she will become the first in her family to earn a four-year degree when she graduates this month with a bachelor’s in child and adolescent development. The significance is not lost on her mother given all Stephanie has overcome to reach this point.

“For me, her graduation is everything,” Margarita said. “She completed something that I know for her was so hard. It is an honor to be her mother.”

Stephanie will take a year off to focus on her health before applying for graduate school. She wants to become a clinical psychologist and work with children who have been diagnosed with chronic illnesses.

She has managed to stay positive throughout the ups and downs of dealing with a disease that she had never heard of only two years ago. The disappointment that she felt last year when she wasn’t graduating with the classmates she had come to know so well has long since dissipated, replaced by the excitement of her family seeing her cross the commencement stage on May 17. She timed her plasma treatments for the week before graduation to ensure that she can fully enjoy the experience.

“I was just so devastated last spring,” Stephanie said. “But my mom said, ‘It’s OK. You’ll be fine. As long as you’re alive, as long as you’re breathing. You’ll have your chance.’