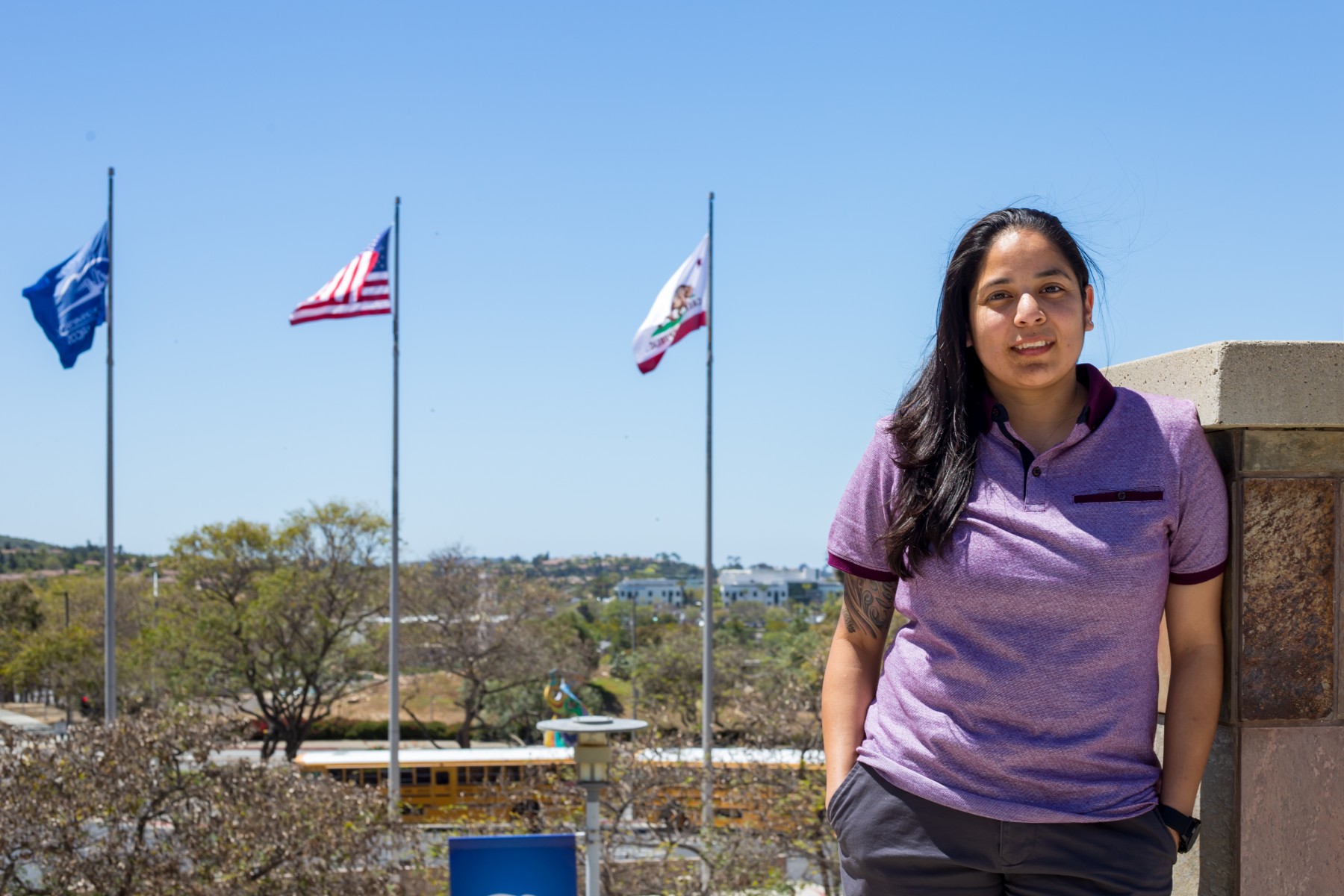 Stephanie Trevino is as tough as an old patch of Texas leather, fitting being that she hails from San Antonio. She served two tours of duty in the Marines during wartime, one in Iraq for seven months in 2008 and one in Afghanistan for eight months the following year.

When one of her moms was diagnosed with multiple myeloma (bone marrow cancer) and osteoporosis at the same time in fall 2017, her grades as a psychology major at Cal State San Marcos took a drastic hit, but she powered through and got back on track as a shining example of fortitude under pressure.

Then her mom fell last fall and sustained so many injuries that she was confined to a hospital for almost the entire semester while at the same time her grandfather was diagnosed with pancreatic cancer.

Most people would not have blamed Stephanie if she quit school and moved back home at that point. But most people don’t know the toughness of Stephanie.

“I knew I had to push through and not let all this affect my grades,” Stephanie said. “My parents always believe the best in me, and even in this difficult time, both my moms pushed me to stay in school and keep positive spirits. I learned my lesson from failing in the fall ’17 semester, so this time I went to seek out help to have the courage to continue.”

That decision to reach out for a lifeline was not easy. But the resolve to make that choice was one of the most important ones in her life.

It led Stephanie to Cougar Care Network, where she met a team of professionals who helped push her through the challenges and pass the rest of her classes. Despite all of the obstacles life has put in front of her, she will graduate this semester.

Part of Stephanie’s path to wearing the cap and gown was joining the Student Veterans Organization on campus. She is now the president of SVO and also works in Veterans Services as the VTEC program specialist. VTEC stands for Veterans to Energy Careers and works to help veterans transition from the military to careers in STEM fields. The program is funded by the Office of Naval Research and helps student veterans throughout Southern California and Hawaii, but is run through CSUSM’s Veterans Services.

“The biggest highlight working with VTEC is being able to help my fellow student veterans,” Stephanie said. “I personally know that being a veteran comes with insecurities when we come into a classroom. We also deal with having to accomplish so much later in life than our university peers. Being part of VTEC, I have the privilege of helping the same student veterans and seeing them receive internships. Seeing each one surpass their expectations makes working with VTEC worth it.” 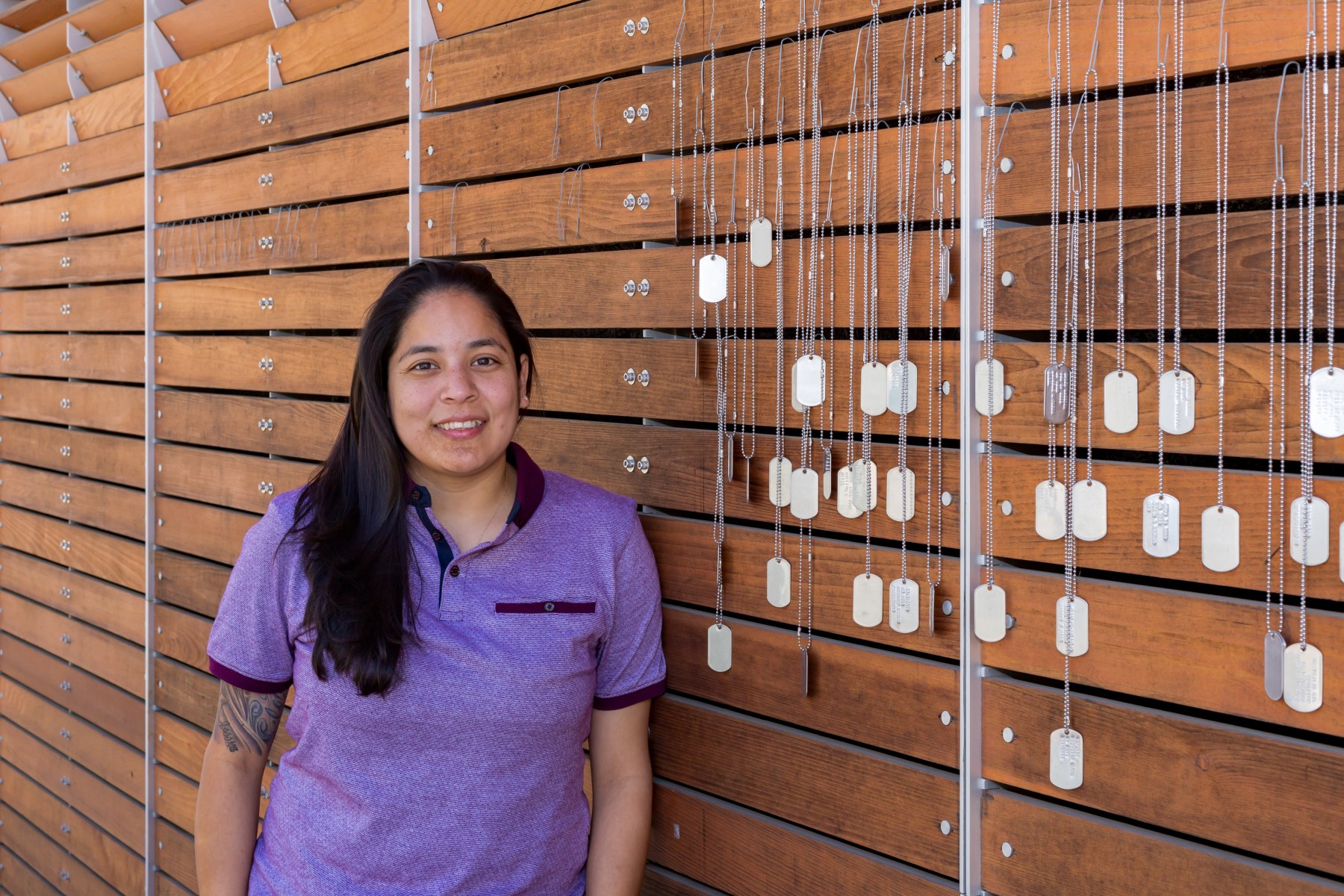 Stephanie will not only graduate soon but do so by helping numerous veterans on campus. Stephanie feels it’s her duty to help others in the way she was offered a helping hand when she needed it most.

“I wanted to become president of the SVO because I wanted to make a difference here with the student veterans,” said Stephanie, who this summer has plans to move up the coast to Monterey with her girlfriend, an active-duty Marine who has orders to attend the Naval Postgraduate School. “I know that I am not the only one going through a tough time so I wanted to help others to create a network within our community here because we are always stronger together. Just from my experience from the military, camaraderie is key for success.”

Stephanie was recently nominated for the Student Leadership Award for Student Affairs. For those who have worked with her in Veterans Services, the nomination was a slam dunk.

“Stephanie continues to exceed expectations and displays her commitment to our success, mission and goals,” said Shin Ae Kook, the communications and outreach manager for Veterans Services and VTEC. “Her charisma, attention to detail and organization has helped our standard operating procedures to flow in a more fluid manner. Stephanie is part of something this big, yet she is incredibly humble. This is the last thing that speaks volumes to her character. With all this going on, her incredible experience, and paving the way for future military-connected students on campus, she is the most down-to-earth person. This is what attracts students as well as staff to her leadership.”

Stephanie’s future plans fittingly include pursuing a career in counseling. She figures her psychology degree will come in handy while hoping to counsel veterans like herself.

Soon Stephanie will walk the graduation procession with her head held high grateful for the support of those that love her and continue to inspire her.

“I am very close with both my moms,” she said. “I knew I had to do everything in my power to stay strong for them. But I wanted to be the example that going through hard times is a part of life and that we still need to push through and do the best we can with the cards we are dealt.”