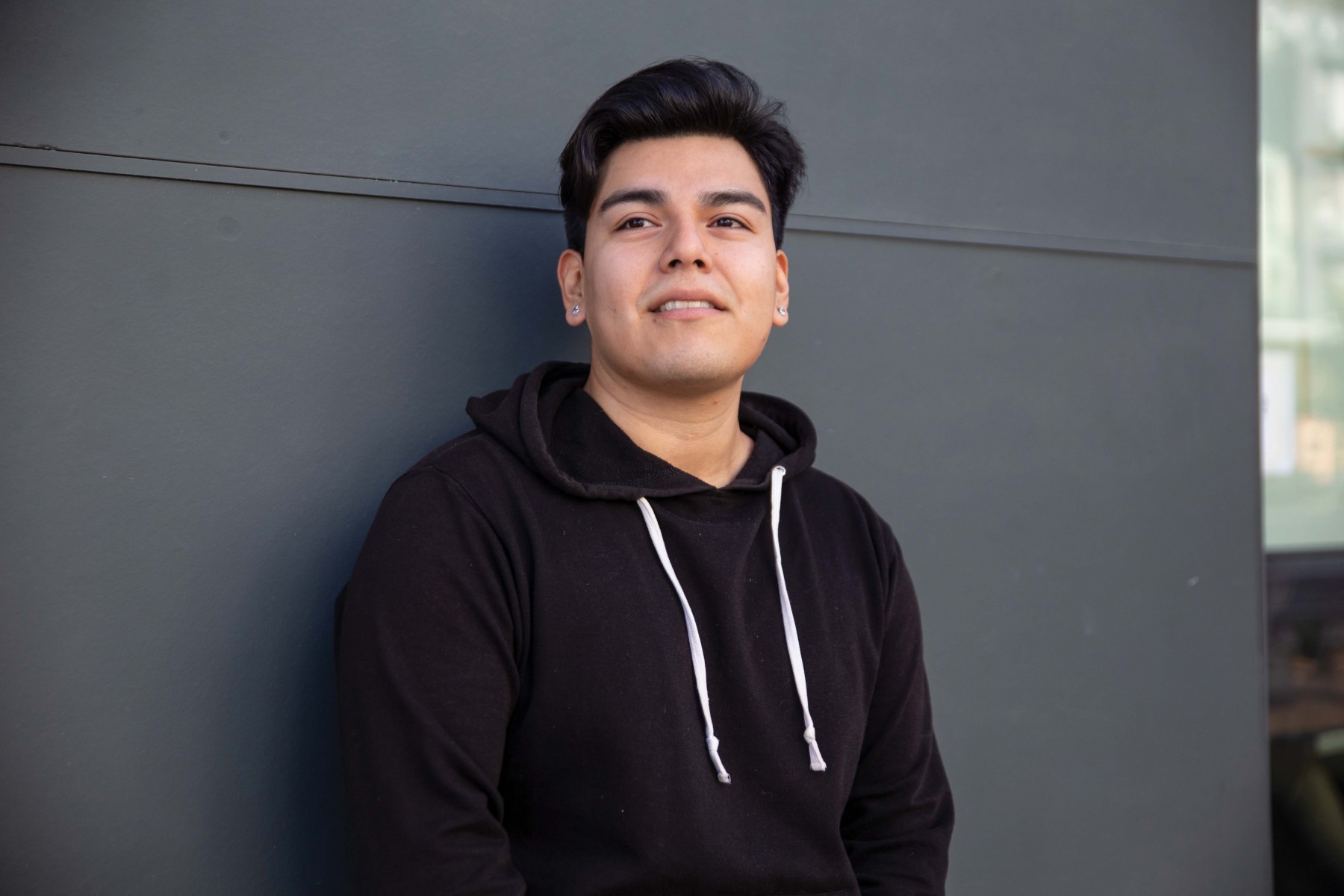 It’s a Monday afternoon in October at Del Dios Academy of Arts and Sciences, which means it’s time for a little STEM.

Sixteen students from sixth through eighth grades line up outside a classroom door 15 minutes before the lesson is to begin at the middle school in Escondido. The regular school day is over, so they don’t have to be here. They want to be here.

They want to see, and learn from, Emmanuel.

Soon, Emmanuel Morales, a senior chemistry major at Cal State San Marcos, arrives along with a fellow STEM ambassador from the university’s Center for Research and Engagement in STEM Education (CRESE). Wearing a white CSUSM T-shirt with the words “Learn STEM Lead STEM,” he starts unpacking his supplies and informing the students about that week’s assignment: They will create a robotic arm out of ordinary household supplies like cardboard, plastic straws, popsicle sticks and string.

“This is a semi-difficult project,” Emmanuel tells the middle-schoolers. “The idea is to simulate the function of tendons in the hand and wrist.”

As he circulates around the room over the next hour, helping groups of two and three with their construction at separate tables, it’s clear that Emmanuel has earned the students’ respect with his soft-spoken, patient demeanor.

“The kids are very attached to him,” said Sophia Gonzalez, an English teacher at Del Dios who supervises the weekly STEM sessions. “He doesn’t say a whole lot, but he’s very open with them and doesn’t really dictate; he just offers his expertise or alternate solutions. Today, they were all looking forward to him. They enjoy coming here, and I think it’s because of how he interacts with them.”

Emmanuel is in his third year as a STEM ambassador, one of the senior members of a group of about 20 CSUSM undergraduate science students who fan out weekly to 12 middle schools across the San Marcos, Escondido and Vista school districts. They do their work through a program called Mobile Making – funded by a five-year grant from the National Science Foundation, as well as a donation from Carlsbad-based Nordson – the purpose of which is to bring design-based, STEM-related activities to underprivileged schools that wouldn’t otherwise have exposure to such disciplines.

Twice a week, Emmanuel stops by the CRESE center in the QUAD building – it’s nicknamed the STEMbassy – to load up on the materials that he’ll need for that day’s project. Besides the robotic arm, among the activities that STEM ambassadors (who also attend Saturday training sessions once every few weeks) assist students with are building basic robots with toothbrushes and cell-phone motors, creating solar-powered vehicles from recycled materials, and powering motors and buzzers with conductive Play-Doh.

It’s all part of a nationwide trend toward the lost art of making things. Makerspaces are popping up in schools around the country – CSUSM is considering installing one – and Mobile Making is just a way to take the same concept on the road.

“Making in general is a big movement right now,” said April Nelson, the program director for CRESE. “The mobile part is unique to us. We are definitely one of the schools leading the charge on this, and we’d like to be more of an example.” 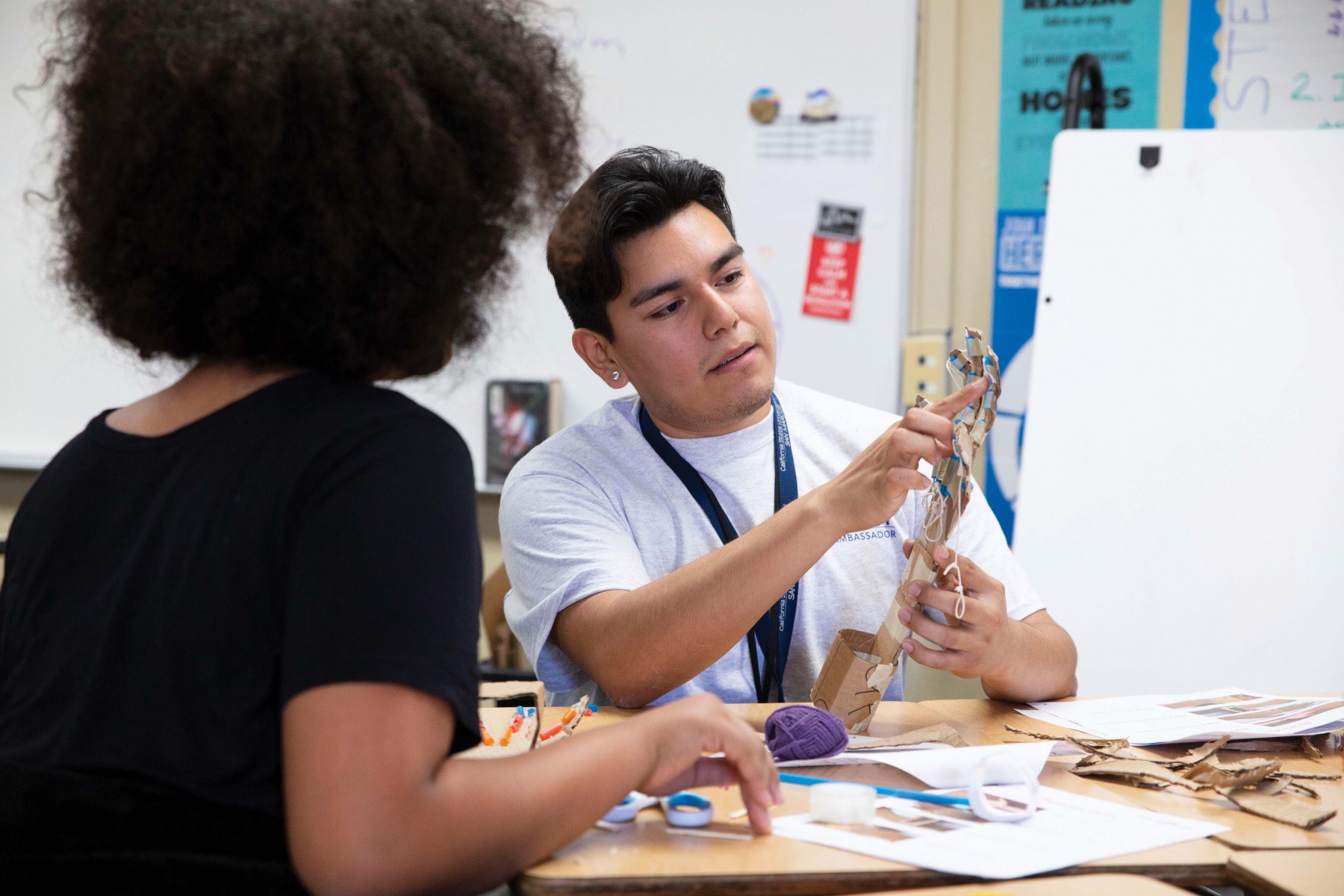 Emmanuel Morales
The senior chemistry major helps a student build a robotic arm out of cardboard at the Del Dios Academy of Arts and Sciences in Escondido. Photo by Andrew Reed

The Emmanuel of the age of the students he’s mentoring now would scarcely recognize the Emmanuel of today. Back then, not only was he not doing STEM activities at school, but he didn’t even know what STEM was.

He was raised in a part of Vista where, he says, “not many people think about college. Most people just want to get a job and start making money.”

Emmanuel was one of those people. He lacked confidence in his intelligence and academic potential. He switched from Rancho Buena Vista to Vista High after his sophomore year, and didn’t have many friends at the new school. And on the home front, his dad temporarily moved out of the house during his high school years, leaving him without a father figure during that crucial, angst-ridden stage of development.

That was when the man Emmanuel still refers to simply as Mr. Robinson entered the picture. Mark Robinson is a Vista High science teacher who’s in his 25th and final year at the school – he plans to retire this spring to focus on his prosperous side venture of winemaking.

“He was a very big influence for me,” Emmanuel said. “He always told me, ‘You’re a fantastic student to have around here, you’re picking up this chemistry very quickly.’ It felt good hearing that from him.”

Robinson, like Emmanuel a first-generation college student whose father wasn’t present in his life, saw in Emmanuel a kindred spirit. They frequently would sit and talk after class and after school about topics far beyond just chemistry.

“He was an incredibly fascinating human being,” Robinson said. “He was serious about the subject matters, but he was way more interesting after class. He had so many ideas, a gazillion little hypotheses in his head. We would talk about anything and everything – philosophical things, science things, earth things, botany, ethnobotany, you name it. If you ask me to pick a word to describe him, it would be curious. He has a curious mind. He’s blessed.”

Emmanuel liked Robinson so much that he proceeded to take his anatomy class as a senior. He went from getting Bs and Cs in most classes to taking AP courses. At Robinson’s urging, he began thinking about college for the first time.

“When I graduated, he told me he was very proud of me,” Emmanuel said. “He would jokingly say, ‘If I could adopt you, I would.’ ”

After he arrived at CSUSM, Emmanuel started looking for opportunities to teach, to take Robinson’s influential tutelage and pay it forward. When he learned about the STEM ambassador program, he knew he had found the perfect avenue.

“The best part is seeing the students’ smiles and knowing that I taught them something,” Emmanuel said, “that they’ll go home and think about trying to be a STEM student.”

Emmanuel used to aspire to be a high school science teacher like Robinson, but Robinson himself convinced him to aim higher. Emmanuel now says he wants to get a job at a company like Viasat or Genentech and try to earn a master’s degree while working.

Asked if he thinks of himself as a Mr. Robinson for the middle-schoolers, Emmanuel smiles.

“That’s something I can take pride in,” he said. “He was very highly looked upon at our school, and I want to be looked at that way as well. The students look up to me; my coworkers look up to me.

“It’s great to think that all this happened because he told me I should continue going to school and get an education.”

Here’s to you, Mr. Robinson. 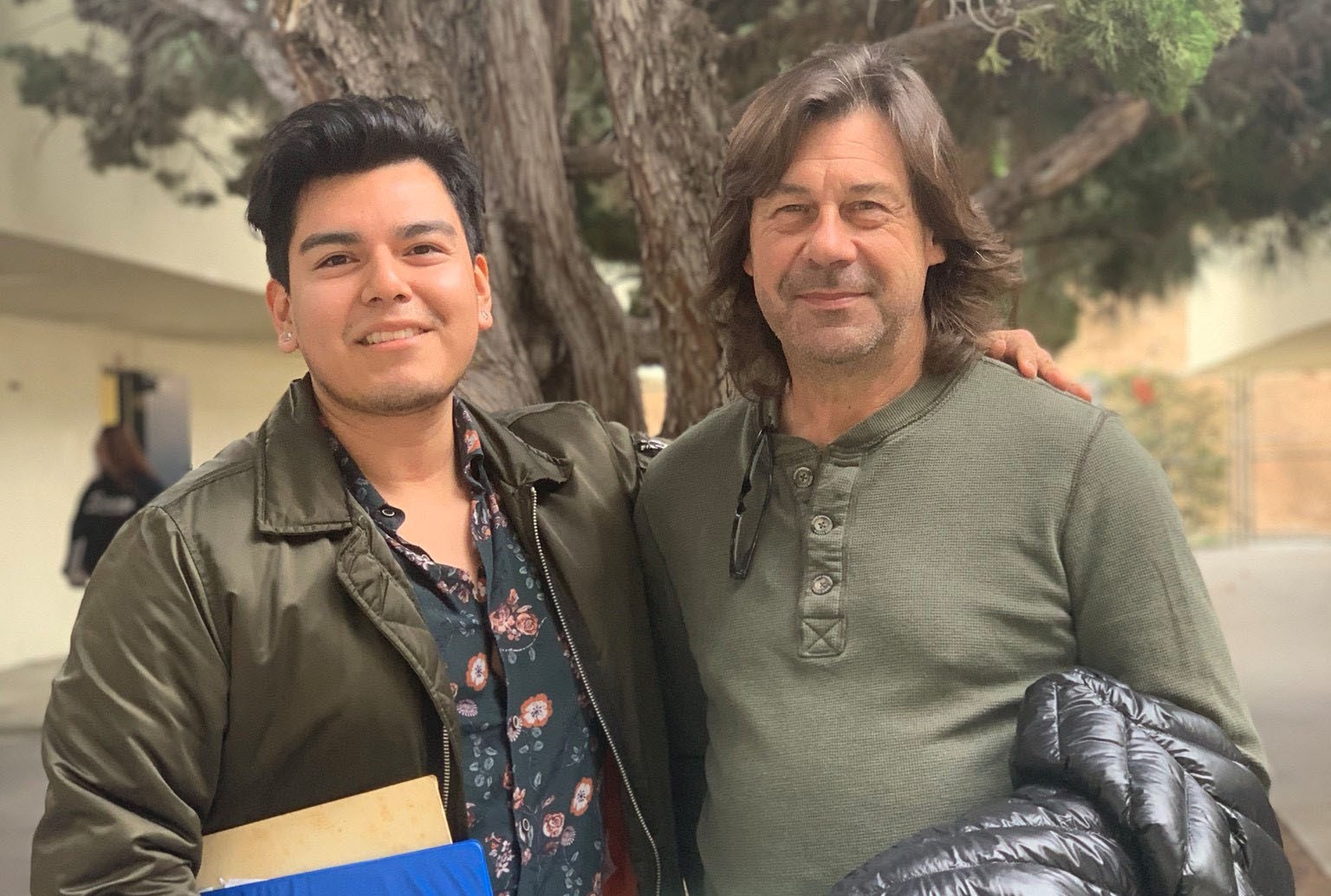