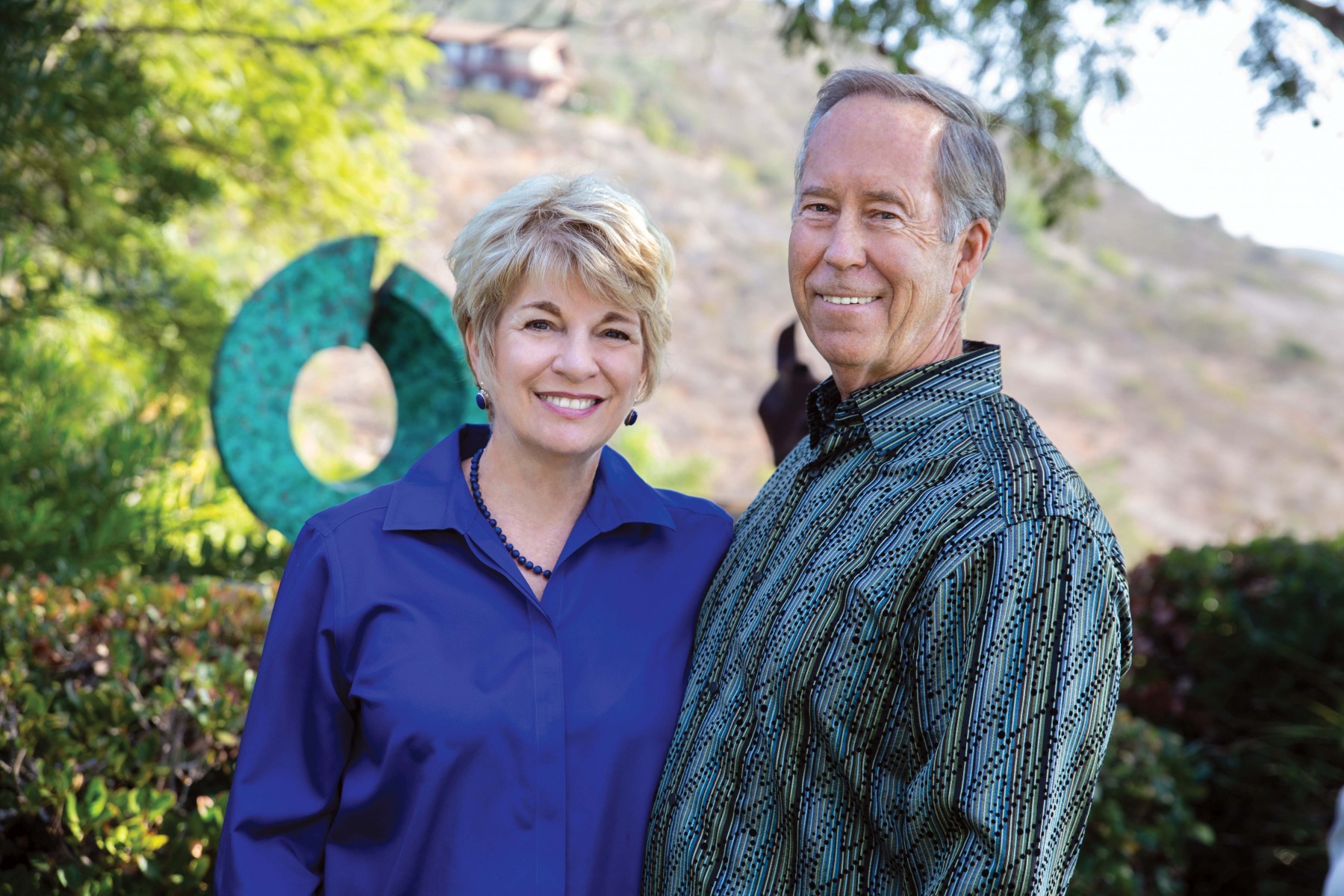 Barbara Mannino and Syd Harris
The Vista couple in 2018 renewed their five-year pledge to fund a working scholarship for ACE Scholars Services. Photo by Christine Vaughan

Barbara Mannino and Syd Harris were no strangers to Cal State San Marcos when they attended the ACE Scholars Services scholarship donor reception in 2015.

Mannino had been on the advisory council to President Karen Haynes for more than five years, dating back to her decades-long role as the CEO of the Vista Community Clinic. Harris, Mannino’s husband of almost 30 years, had loaned a piece of his stone artwork to the university.

The longtime residents of North County had watched CSUSM spring up from nothing – Mannino still remembers the site near a Jerome’s furniture store – and become increasingly impressed by its evolution into a pillar of the region.

On this day, however, the couple’s connection to the university grew more personal. As they listened to the inspiring speech of Julius Williams, a former foster child turned ACE Scholar, they thought of their own adopted daughter, whom Mannino took in as a foster child during her first marriage. They thought of how much Kim Mannino Sun could have benefited from something like ACE, CSUSM’s unique program that supports former foster youth.

“She’s been very successful in her life, but she struggled in school, and if there had been something like ACE for her, I think she might have finished high school and gone to college,” Mannino said. “So when we heard Julius speak, we were really moved and inspired by him.”

Mannino and Harris returned to their home in Vista, talked it over, and decided that they wanted to start giving more than time and art to the university. It was the start of a new phase of a wonderful relationship.

The couple made a five-year pledge to fund a working scholarship for an ACE student, a commitment that they renewed in 2018 for five more years. Last fall, too, they increased the amount of their legacy gift, which will go to ACE as well as to the new engineering program and Veterans Services.

The latter two initiatives also are near and dear to the couple’s hearts. Harris was a professional engineer for almost 40 years before being reborn as an artist late in life, and he grew up as an Air Force brat whose family moved all over the world because of his father’s job.

“While the ACE program was important for both of us – maybe more for Barbara than me initially – I wanted something that I could direct some of my attention to,” Harris said. “That’s where the engineering and veterans component came from. Based on what the university is doing, it seems to be a good fit.”

The stepped-up level of donating to CSUSM fits into a general pattern of giving back for the couple. After retiring in 2012 from a 30-year career running the nonprofit Vista Community Clinic – which she expanded from a shoestring organization with a budget of $500,000 and a staff of 30 to a regional fixture with a budget of $35 million and a staff of 530 – Mannino threw herself into volunteering.

A dog lover who has three mixed breed rescues, she began giving her time to the San Diego Humane Society, the Animal Rescue Resource Foundation and the county Department of Animal Services. She read to second- and third-graders through the Oasis program at Olive Elementary School in Vista. She continued her work as a coach for other CEOs and nonprofit leaders as part of the Fieldstone Leadership Network.

And in December 2017, she heightened her engagement by joining the CSUSM Foundation Board.

“When I retired, I didn’t want to be responsible,” Mannino said. “I was asked to be on several boards, and I said no. I really did just want to walk dogs, read to kids, and listen, but I didn’t want to have to make decisions. After five years, I was ready to take a step back in, and I was fortunate that Cal State San Marcos came forward with the foundation opportunity.”

As for Harris, he has loaned to CSUSM indefinitely a large alabaster sculpture that sits in the McMahan House, and more could be in the offing. About 60 of his pieces decorate the inside and outside of the couple’s Vista house, in the same neighborhood where President Haynes and Jim Mickelson, her husband and the director of ACE, live.

“I’ve encouraged him to leave some of his pieces to the university,” Mannino said. “There are enough of them to go around, and they’re beautiful.”

Besides their philanthropy and other retirement pursuits, Mannino and Harris are avid travelers who have been on more than 50 vacations in the last six years alone. They consider their most memorable experience to be a trip to San Ignacio Lagoon in Baja California, a remote spot that’s the only place in the world where humans can have physical contact with whales.

“There were 331 whales in the lagoon when we went, and 10 percent of them are friendly,” Mannino said. “They bring their babies up to the boat, and you can touch and kiss them. There’s nothing else like it.”

The couple doesn’t have any children together, though they treasure their time with Kim and their two adult grandkids, Kimberly and Kevin. They both live in the South, along with Kim, but for most of her life, Kimberly, now 30 and the mother of a 4-year-old boy, would stay with Mannino and Harris in North County for the entire summer.

“She developed her own circle of friends, she worked at the clinic, and really became part of our West Coast family,” Harris said. “It was a joy.”

The couple was unsuccessful at convincing their granddaughter to attend CSUSM, but they are still dorm parents, in a sense. The niece of Mannino’s son-in-law is a junior from Malaysia whom Mannino and Harris helped to move into her apartment.

It’s just another tie that binds them to CSUSM.

“It’s really been a miracle because I never expected it to grow like it did,” Mannino said. “One of the things that really impresses us about the university is that it’s such a community gem and is really focused on strengthening and building the community.

“Choosing to give to Cal State San Marcos and being able to further the education of people who might not otherwise have had the opportunity to go to college, and one day will be able to give back tenfold, is a legacy that my husband and I are very proud of.”