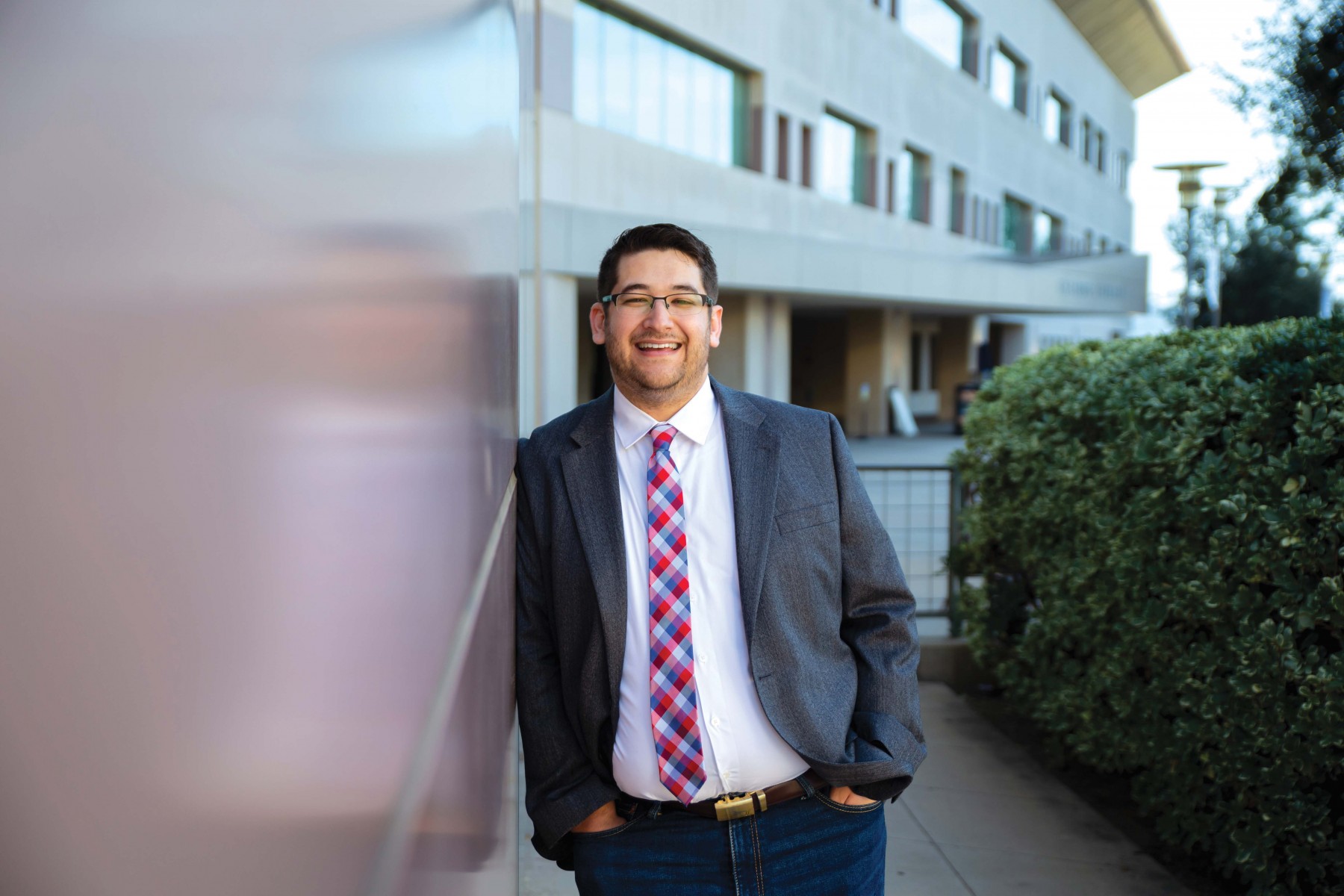 His suitcases were packed. The social workers were on their way.

Matt Walsh was only 14 years old but had endured a lifetime of abuse at the hands of a woman who had adopted him from the foster care system when he was an infant. Now he was headed back to foster care, as soon as the social workers arrived at the home of the Escondido family that had taken him in temporarily.

Tom and Kim Zarro, the parents of that family, had a different idea. They already had two children and weren’t exactly looking for a third. But their faith wouldn’t allow them to send Walsh away.

“I’ll never forget my wife’s words,” Tom Zarro said. “She looked at me and said, ‘How can we go to church on Sunday and let this boy go back to the foster system?’ And it absolutely cut me like a knife. I had no answer.”

Walsh stayed. In a nurturing environment for the first time in his life, he thrived. With the help of ACE Scholars Services, Cal State San Marcos’ unique program for former foster youth, he attended the university and developed into a leader, even becoming student body president by his senior year.

Now 27 and working for his adoptive father’s transportation company, Walsh is in position to give back, and he’s doing just that. This spring, for the third time, he will hand out a $500 cash award to the ACE Scholars graduate whom he deems the most outstanding. The award is named after Tom and Kim Zarro.

“It’s in honor of them because I wouldn’t be here without them,” Walsh said. “It’s my gift to honor them and my family.” 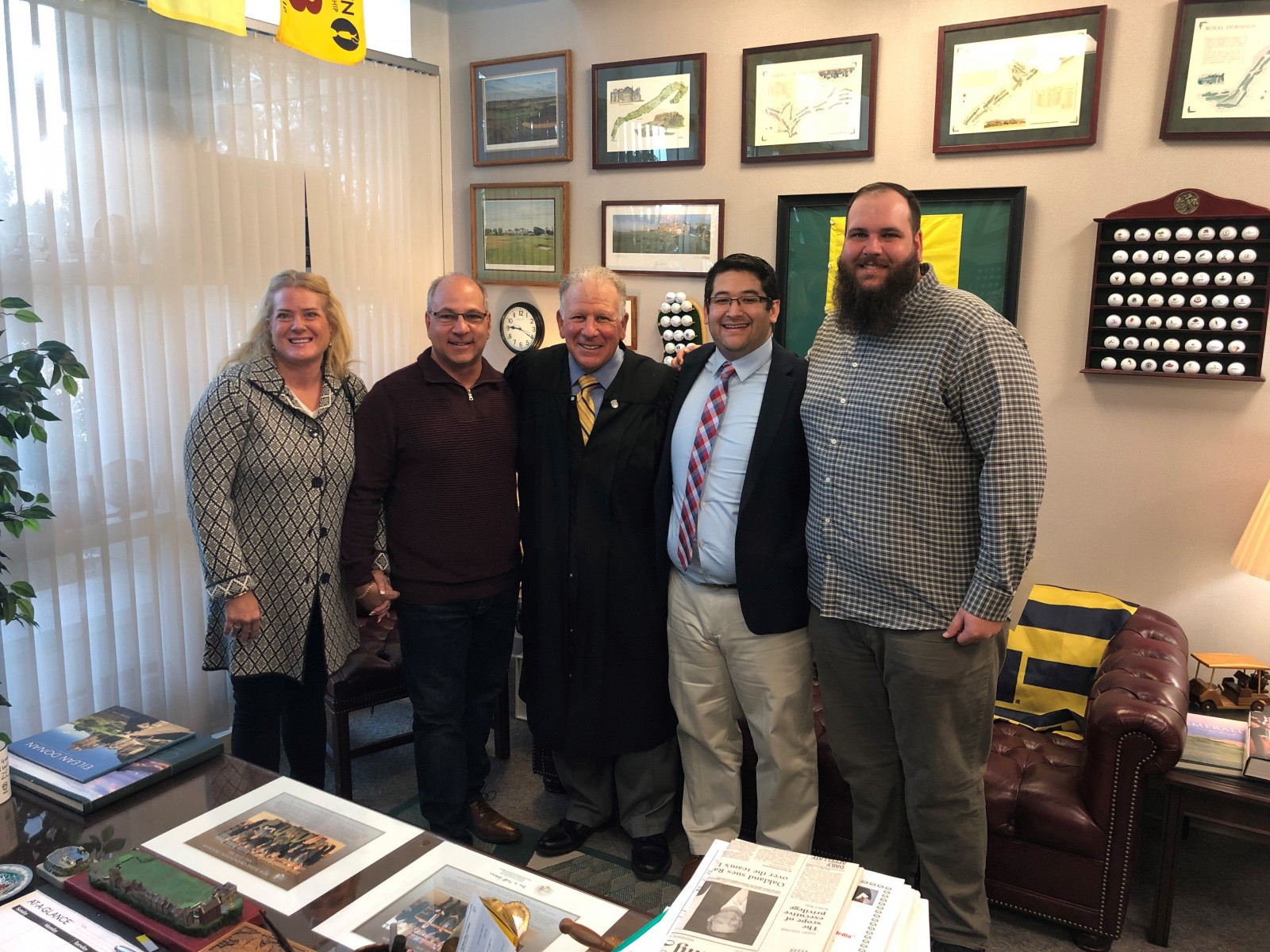 Walsh was essentially born into foster care. He doesn’t know anything about his birth parents, and doesn’t care to. He was adopted at age 2 by a single mother who was far from benevolent.

She was addicted to drugs and alcohol. She was physically and emotionally abusive. Walsh remembers being homeless for most of his youth – living out of cars and hotels throughout North County. He missed a disturbing amount of school.

“It was just me and her,” he said. “She didn’t work. She was on disability and got a check from the government for having a foster kid.

“There was no redeeming factor, like she was trying her best. There was no silver lining. She was just a very unhealthy and very bad person.”

Walsh didn’t feel empowered to do anything about his predicament until he reached Rincon Middle School in Escondido. He finally acquired a good group of friends from good families, and they all told him the same thing: What your mother does isn’t normal, Matt.

So on the day after his 14th birthday, in the spring of his eighth-grade year, Walsh spilled his guts to the school counselor – everything about his mom, about her drug abuse, about his bruises and scars. After school officials intervened, he was removed from his mother’s care and sent to Polinsky Children’s Center, a San Diego facility for the temporary emergency shelter of children who must be separated from their families for their own safety.

Following a short spell at the center, he ended up staying with the family of a friend from Rincon. The Zarros lived in the same Escondido neighborhood, and Walsh soon became even closer friends with their son, Taylor, who was one year younger. He gradually began to spend less time with the family that first took him in and more time with the Zarros.

In the summer of 2005, with Walsh facing a trip back to Polinsky, Tom and Kim made their fateful decision.

“The social workers showed up, but at the end of the day, we couldn’t send Matt back,” Tom said. “We asked if we could just be his foster parents, and the state fast-tracked the process. That was the beginning of the end of Matt’s foster life.”

Assimilating another teenager, especially a badly scarred one, into an established family didn’t come without struggles, however. Walsh had absorbed so much abuse that he slept with a baseball bat. He was angry, introverted and malnourished.

The Zarros pulled him out of public school and enrolled him at Calvin Christian. They put him in counseling and immersed him in their already-active lives, from sports to youth ministry through their church. Just as importantly, their two children, Taylor and Devan, welcomed Walsh into the family with open arms.

“It was probably six months to a year before we said, ‘OK, we don’t have a bad apple here. We have an opportunity to really make a difference and impact this kid, so we will stay the course,’ ” Tom said.

After graduating from Escondido Charter High, Walsh chose CSUSM because he liked the teaching program. Even though he lived nearby in Escondido, he opted to eschew commuting and move into the dorms. It was a sign of his desire to throw himself into campus life, and that’s just what he did.

Reinventing himself as a bubbly people person, Walsh made an immediate impression at the ACE Scholars welcome dinner in his freshman year.

“Students were getting up and introducing themselves, and there’s Matt – he had very bushy hair, barefoot – talking about the fact that his goal in life was to become vice president,” said Jim Mickelson, the director of ACE Scholars Services. “Everybody was like, ‘Why vice president?’ He said it’s the best job because you get to do different things without all the pressure and responsibility. I had to chuckle.”

While Walsh grew more and more involved at CSUSM – he joined the Sigma Alpha Epsilon fraternity and became a resident adviser, in addition to his prominent role in Associated Students, Inc. – he grew more and more appreciative of the work of ACE, even though he rarely benefited from it. After all, throughout high school, he was part of a supportive family with financial means.

“I’m always trying to draw attention to ACE Scholars,” Walsh said. “When I was student body president, my big goals were to talk about veterans and talk about foster youth.” 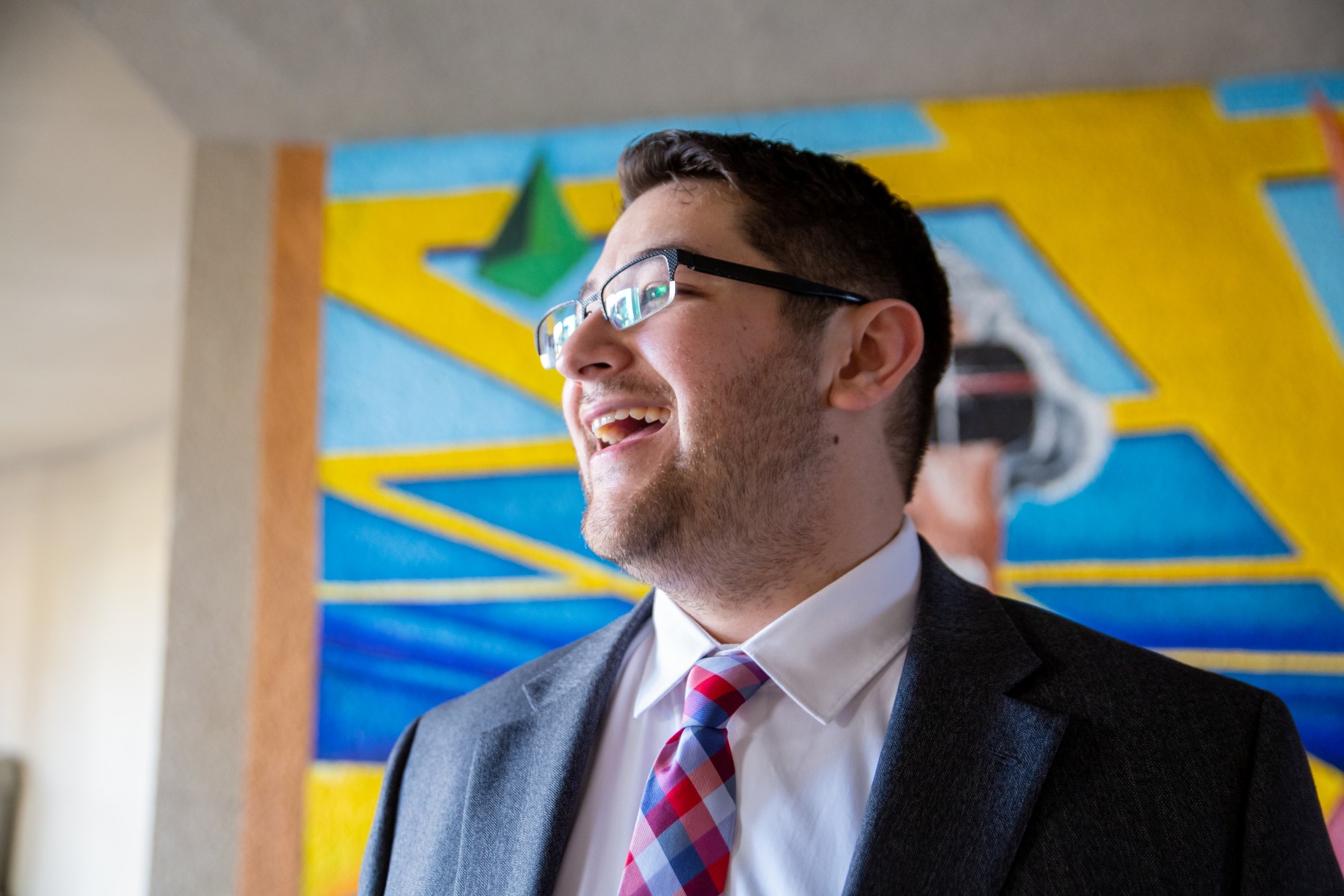 Matt Walsh
“If that story is the motivation for other people to give, then that would be the goal," Walsh says, referring to his adoptive parents taking him in from the foster care system. Photo by Christine Vaughan

Walsh graduated from CSUSM in 2014 with a double major in social science and political science, but he has hardly left the university in his past.

The chapter adviser of SAE, he’s on campus for meetings at least once a week. When he heard in late September that Mickelson would be retiring at the end of the current school year, he brought lunch over for the entire ACE office. Every December, he drops off holiday cheesecakes to select people on campus.

He left his job as executive director of the Republican Party of Orange County last year – tired of heightened partisan rancor, he now works in operations for his father’s company, Cargo Management Group – but he’s still a politician at heart.

“I think he’d make a great employee if there was the right spot on campus because he just loves this place,” Mickelson said.

Recently, that has meant translating his passion into action. Walsh himself was recognized as the outstanding ACE graduate in 2014, and he decided to resurrect the award after it went away a few years later. Mickelson and his staff make recommendations, and Walsh picks the winner. He envisions it as a cash prize with “no strings attached.”

“Buy a PlayStation, go to Vegas, pay off debt, do whatever you gotta do,” Walsh said. “It’s a nice gift to give someone, like ‘Hey, you made it through college, you did what 98.5 percent of those out there like you will not do. You truly made it.’”

Given his abject upbringing, Walsh, too, has truly made it. And he’ll never stop paying tribute to those who helped make his transformation possible.

“These are two people who already had two children, definitely didn’t need more stress in their life,” he said. “They did what was right and said, ‘Here’s a kid who could use our help. What kind of people would we call ourselves if we turned him away.’

“If that story is the motivation for other people to give, then that would be the goal.”