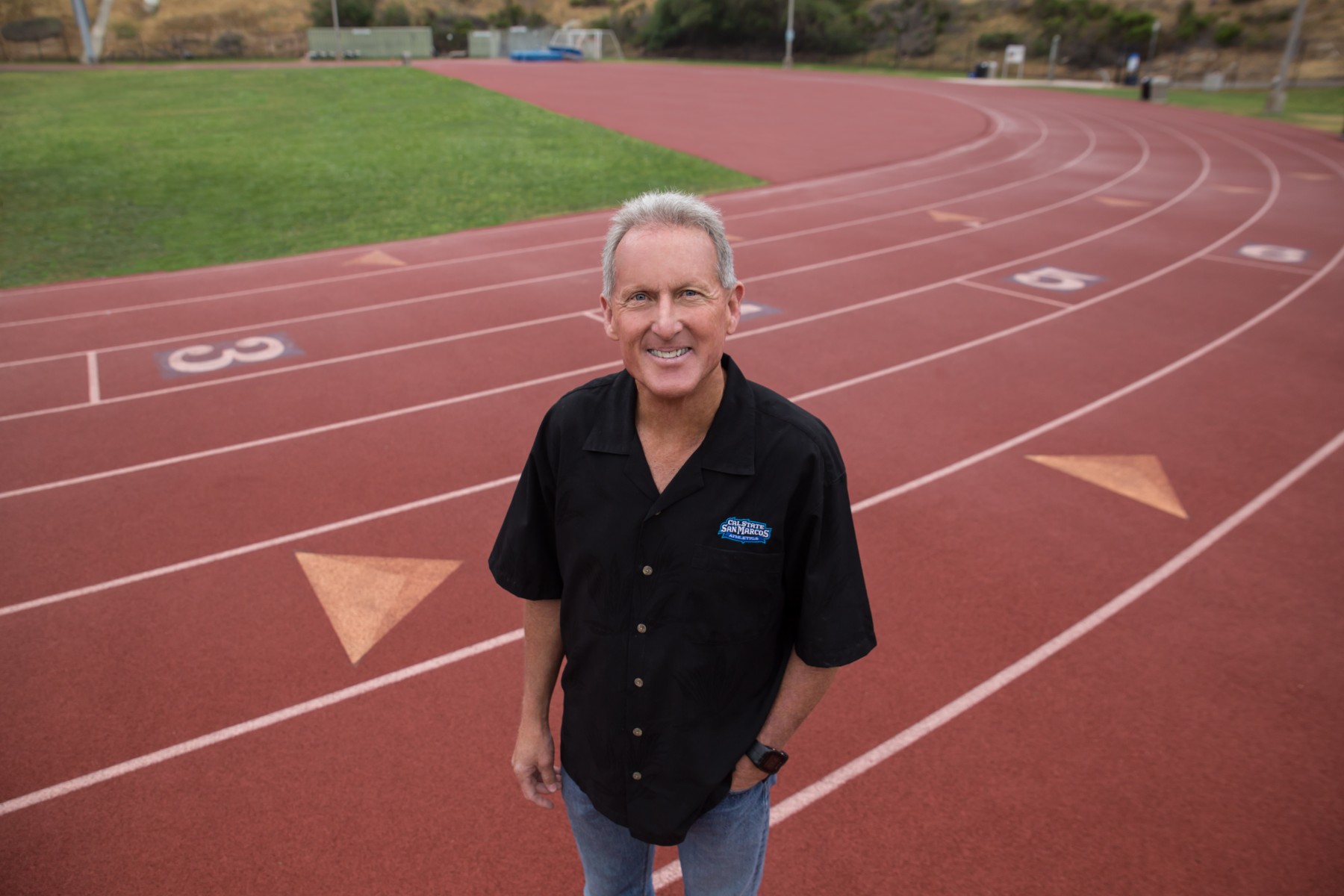 Steve Scott
The only cross country and track and field coach in CSUSM’s history, Steve Scott stepped down at the end of the spring season after nearly two decades at the helm of the Cougars. Photo by Christine Vaughan

It was a run-of-the-mill workout when one of the Cal State San Marcos runners sensed someone on her hip. But it wasn’t just anyone tagging along – it was running legend Steve Scott.

“He jumped in and ran with me,” Natalie Rodriguez said, “then he started going pretty fast. He still has it and he still loves to run.”

The only cross country and track and field coach in CSUSM’s history, Scott stepped down at the end of the spring season after nearly two decades at the helm of the Cougars.

“I feel honored to have had him as a coach,” Rodriguez said. “He doesn't act like he was a superstar back in the day.”

There was a time when Rodriguez didn’t know much about Scott’s résumé. But it wasn’t long before she learned about the Great Scott.

“When I researched him I was amazed at what he had accomplished,” Rodriguez said. “I’m so lucky to have had him as a coach and a mentor.”

Luck? The Cougars got a big dose of it when Scott agreed to come aboard. 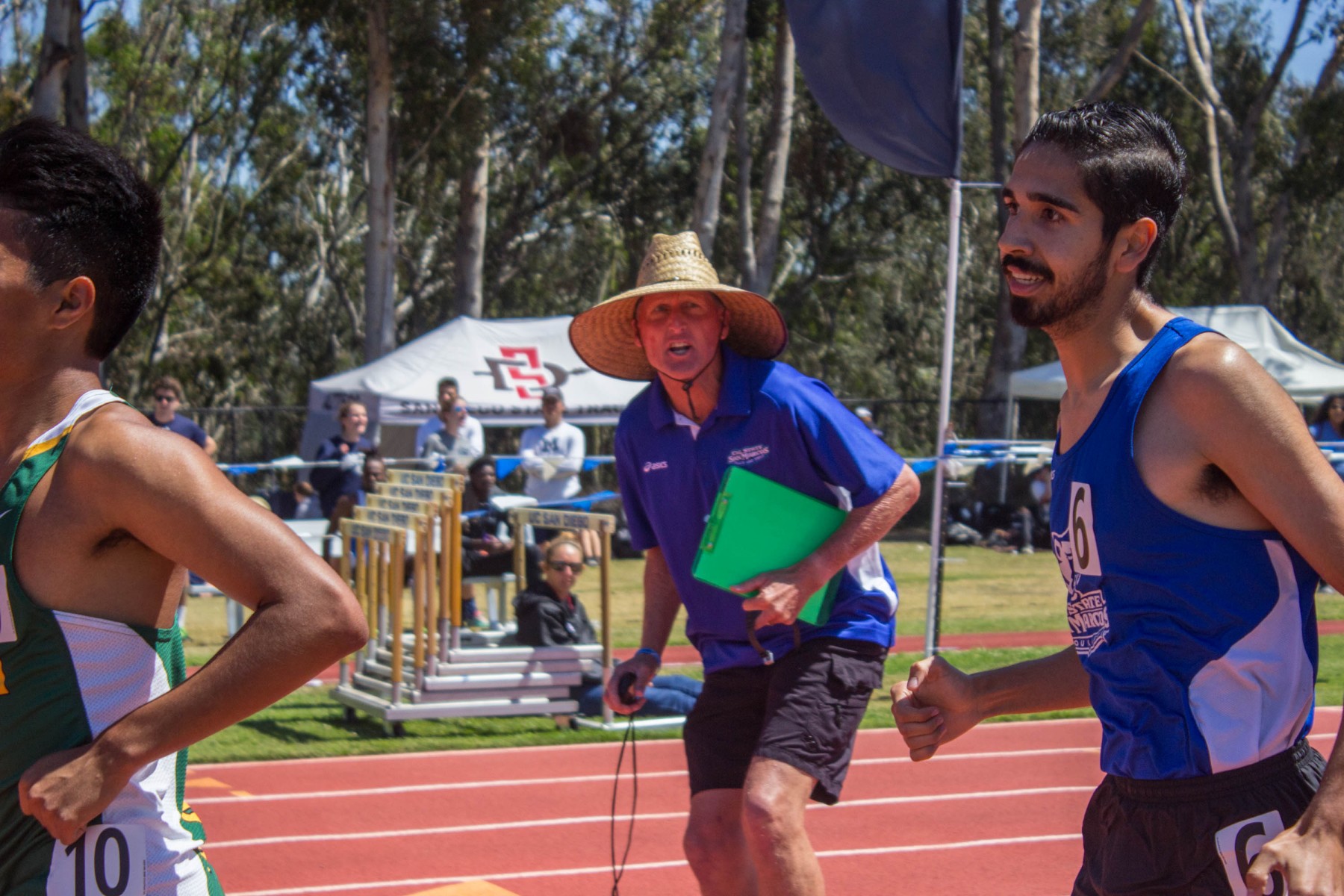 Steve Scott
The only cross country and track and field coach in CSUSM’s history, Steve Scott stepped down at the end of the spring season after nearly two decades at the helm of the Cougars.

The christening of CSUSM’s Mangrum Track and Soccer Field in 1999 was a big deal. Longtime Cougars supporter Bob Mangrum wanted his running hero, Scott, to preside over the opening ceremonies. Scott was all in, although he wasn’t sure where CSUSM was located.

“I thought it was across the 78 freeway from where San Marcos City Hall is,” Scott said with a laugh. “The only buildings on campus then I think were Craven Hall and the University Commons.”

There were few cellphones back in 1999 and when Scott's ride was late to the track’s ground breaking, Scott didn’t make it to the ceremony.

“When I said I would do it I had no idea what Cal State San Marcos was or where it was,” Scott said. “And when it became clear I couldn’t make it, I couldn’t call anyone because they were already out on the track.”

An embarrassed Scott finally reached someone at CSUSM with a mighty mea culpa. But Scott’s rare misstep turned into a stroke of good fortune for CSUSM.

Scott wanted to make things right so he went to Mangrum’s Valley Center home, where they enjoyed grub and a run. Mangrum revealed that the Cougars were starting a track and cross country program and, oh by the way, would Scott know of any coaching candidates?

Scott’s right arm shot up so fast it’s a wonder he didn't dislocate his shoulder.

With his racing career in the rear-view mirror, the rat race wasn’t agreeing with Scott. He was selling sponsorships for the Carlsbad 5K, an event he co-founded, and hawking nutritional goods.

“I was miserable,” Scott said. “I needed something I could be passionate about, like I was with my running. So when he asked about finding a coach, it was the answer to my prayers.” 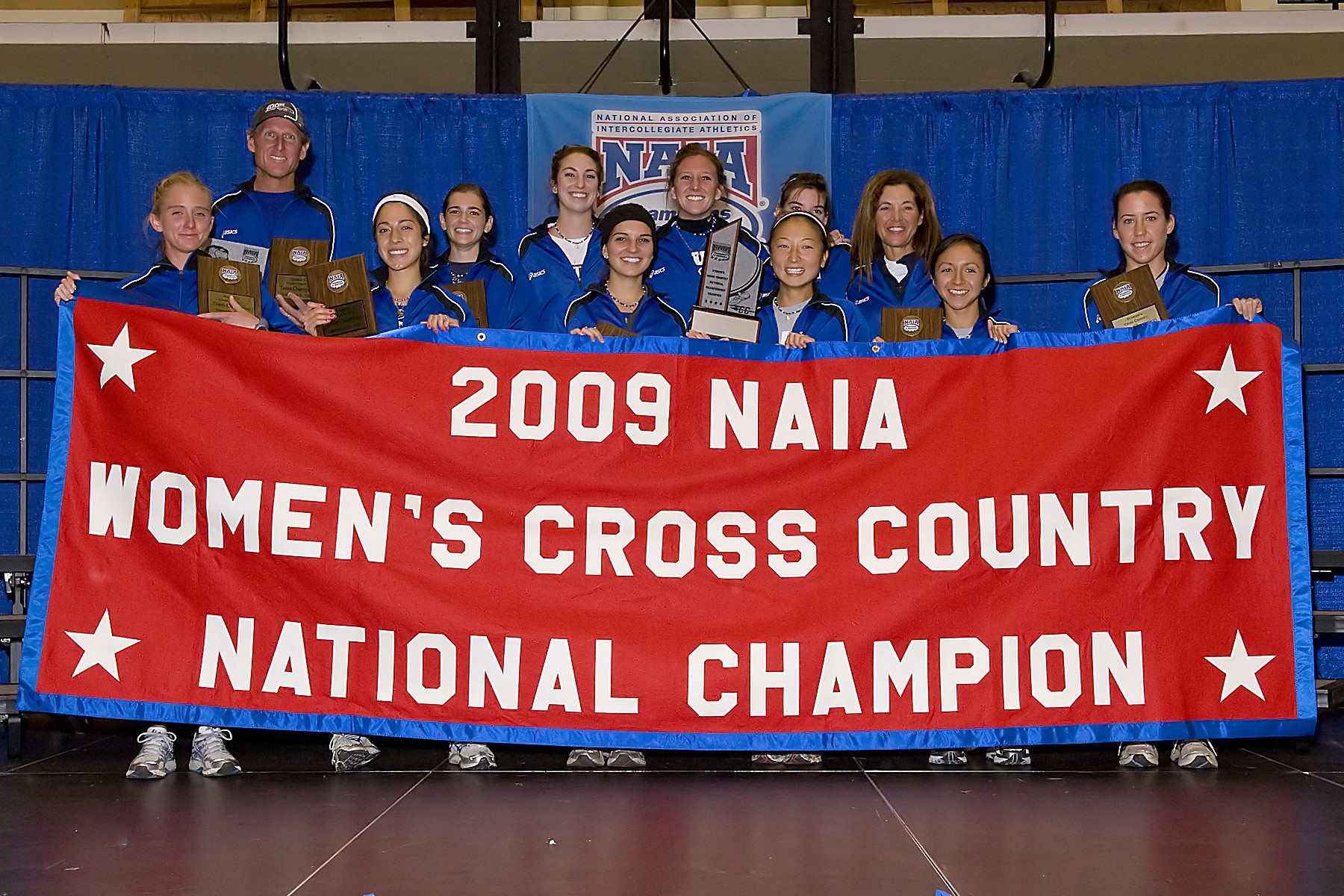 One of a kind

There were few runners like Scott. After graduating from Upland High School, about 90 miles north of CSUSM, he ran for UC Irvine before embarking on a running career that few equaled.

Scott set the American indoor and outdoor records in the mile and the indoor standard at 2,000 meters. Track and Field News had Scott ranked No. 1 in the U.S. in 10 different years.

There are scads more eye-popping marks and milestones. Scott even established the world record of playing a round of speed golf, scoring a 95 on 18 holes in under 30 minutes.

Some would like to hear more tales of Scott’s running dominance, but he isn’t one to boast.

“He’s a very humble man and he does not brag about what he did,” CSUSM runner Lisa Flora said. “We have to pry it out of him.”

Greatness as an athlete doesn’t always translate into being a top-flight coach. Often those who have performed at the highest level don’t have patience to teach someone not up to those standards.

Then there is Scott.

“At the beginning of the season he always reminded us that he is happy as long as we are happy,” Flora said. “And to make him happy, you don’t have to be fastest on the team. As long as you are doing your best and are a good teammate, he is happy. That was always his main objective.” 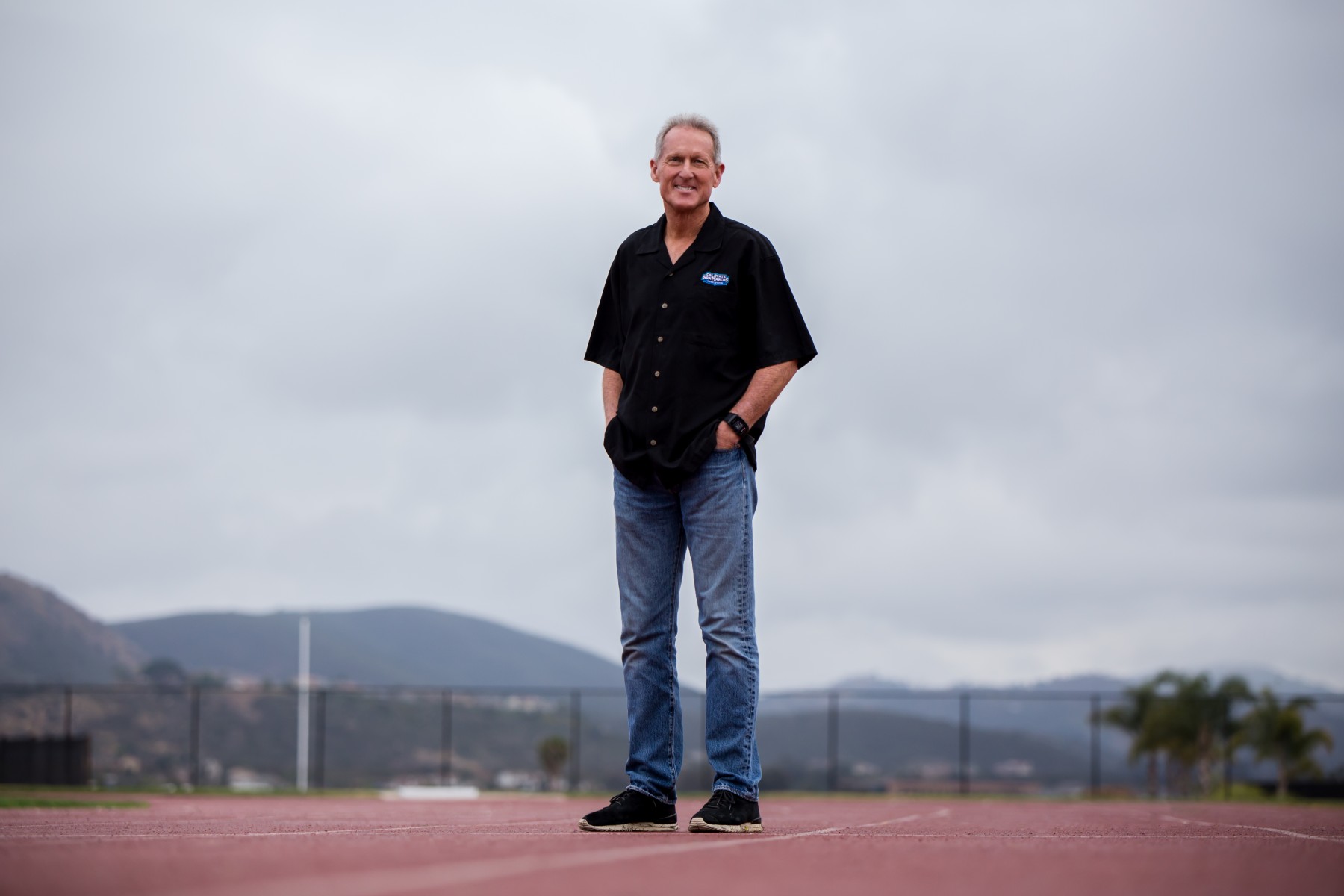 Steve Scott
The only cross country and track and field coach in CSUSM’s history, Steve Scott stepped down at the end of the spring season after nearly two decades at the helm of the Cougars. Photo by Christine Vaughan

What will the next 20 years bring for the CSUSM cross country and track and field programs? Scott sees only positive visions.

The school successfully made the transition to NCAA Division II, and Scott said few universities offer what CSUSM does.

“It’s got tremendous potential,” he said. “I could see this school being a dominant force in all of the California Collegiate Athletic Association sports because of the size of the school and our location, close to the ocean. It pretty much has everything, and other schools pale in comparison. Plus, we can start tapping into our graduates and have them support their alma mater.”

Any time CSUSM Athletic Director Jennifer Milo needed a voice to spread the word on CSUSM, Scott was always available.

“He was the first one to say ‘yes’ if asked to go speak to a group or do an event or clinic with youngsters,” Milo said. “He always lent a hand. That’s what is special about Steve and who he is as a person.”

This being school, everyone gets a report card. When Scott’s evaluations landed on Milo’s desk, she knew the scores before opening the folder.

“The student-athletes all say how much Coach Scott cares about them,” Milo said. “To Steve, it’s not just about how fast they run or how many miles they run. It’s how they are as people and how they are developing in college and working toward that degree and getting that job once they graduate.”

After two decades, Scott is moving on to the next chapter of his life, but the Cougars are the better for his time at CSUSM.

“I hate to lose Steve’s leadership in our department, but he has built his legacy and is leaving here having accomplished everything and more than he could have hoped for,” Milo said. “His student-athletes are better people because they had Steve Scott in their life.”