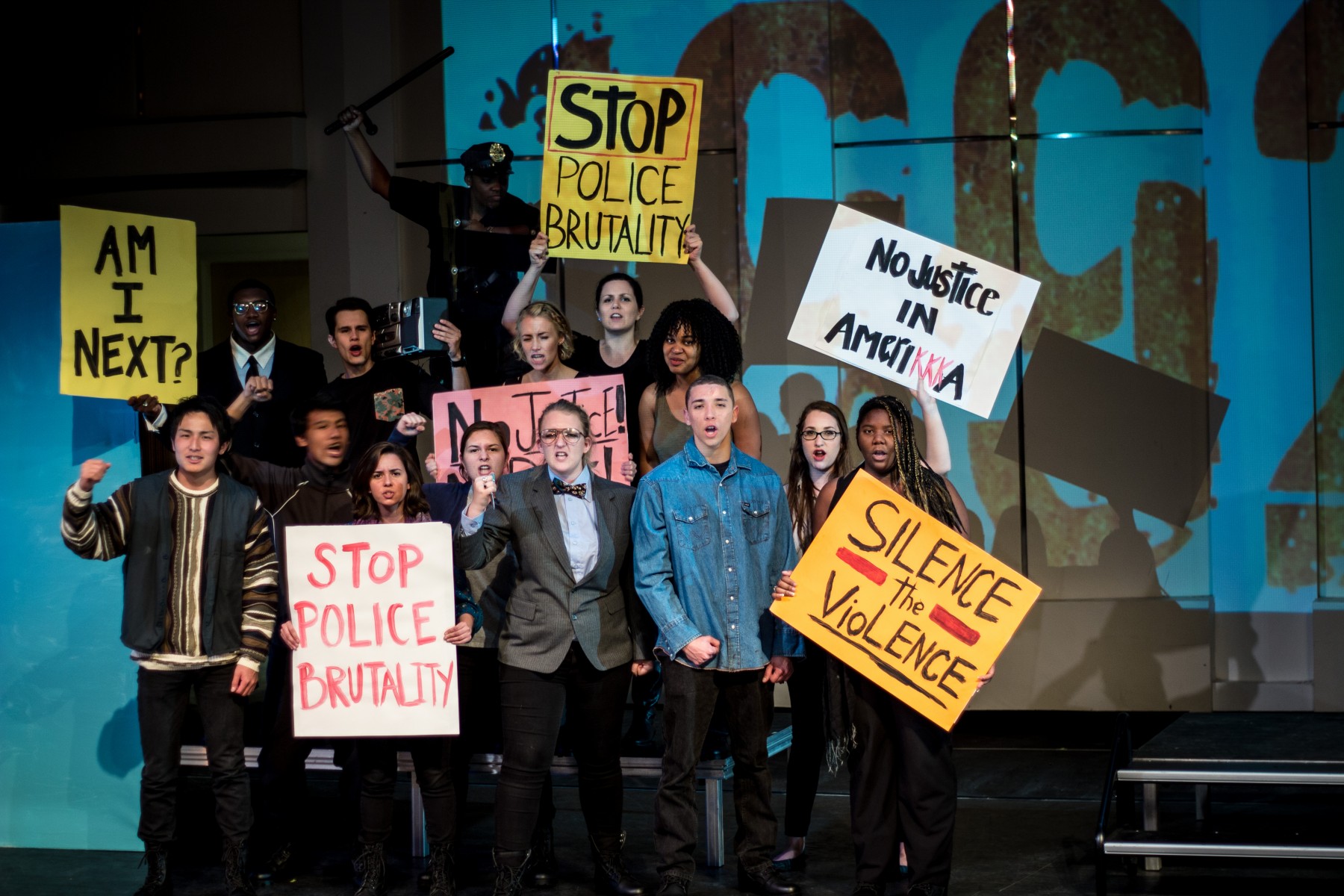 Twilight, LA: 1992
Following recent allegations of excessive force by police departments in Missouri and New York, the play – which opens on April 10 - is timelier than ever.

None of the CSUSM student actors in Director Kaja Dunn’s production of Twilight, Los Angeles: 1992 remember the 1991 police assault of African American Rodney King, an event that ignited international outrage after being captured on videotape and aired widely. In fact, only one cast member was actually alive in 1992, the year when protests and riots broke out in the streets of Los Angeles following the trial and acquittal of the four Los Angeles Police Department officers. But today, following recent allegations of excessive force by police departments in Missouri and New York, the play – which opens on April 10 - is timelier than ever.

“I was really surprised that I had never heard about the Rodney King trial and outcome before,” said first-year theatre major Dominque Duren. “But after what happened in Ferguson, it just shows you that history repeats itself.”

Twilight, Los Angeles: 1992 is the result of nearly 300 interviews Anna Deavere Smith conducted in a nine-month span with gang members, police officers, lawyers, activists and shopkeepers from a diversity of class and racial backgrounds after the Rodney King riots. The technique, often called theatre of testimony or documentary theatre, draws on traditions of oral history and is often used as a catalyst for social change. Twilight, Los Angeles: 1992 was nominated for the 1994 Tony Award for Best Play.

Although Twilight is traditionally a one-woman show, the CSUSM production features a small cast in which each actor plays a range of characters.

“For Twilight, Anna Deavere Smith encourages directors to use the non-traditional method of casting roles without considering actors’ ethnicities,” said Dunn. “In addition, all of the actors play more than one role.”

“The audience doesn’t expect to see a white girl in my roles,” said Laurissa. “It forces you to see that person from a new perspective.”

“It’s been stressful to play three different people,” he said. “And these aren’t imaginary characters – they are real people. We needed to not only learn the lines but also learn the content behind the people we are playing. I spent hours doing research!”

Dunn says that the color-blind casting is a thought-provoking technique not only to encourage audience engagement and reflection but to encourage the actors to play each character realistically without stereotypes.

“I wasn’t sure how I would relate,” said Dwaine about his role as a white juror. “It was difficult – the two words ‘grand jury’ have had a lot of emotional charge lately. But I started to feel empathy toward him and feel his pain – he really thought what he was doing was right.” 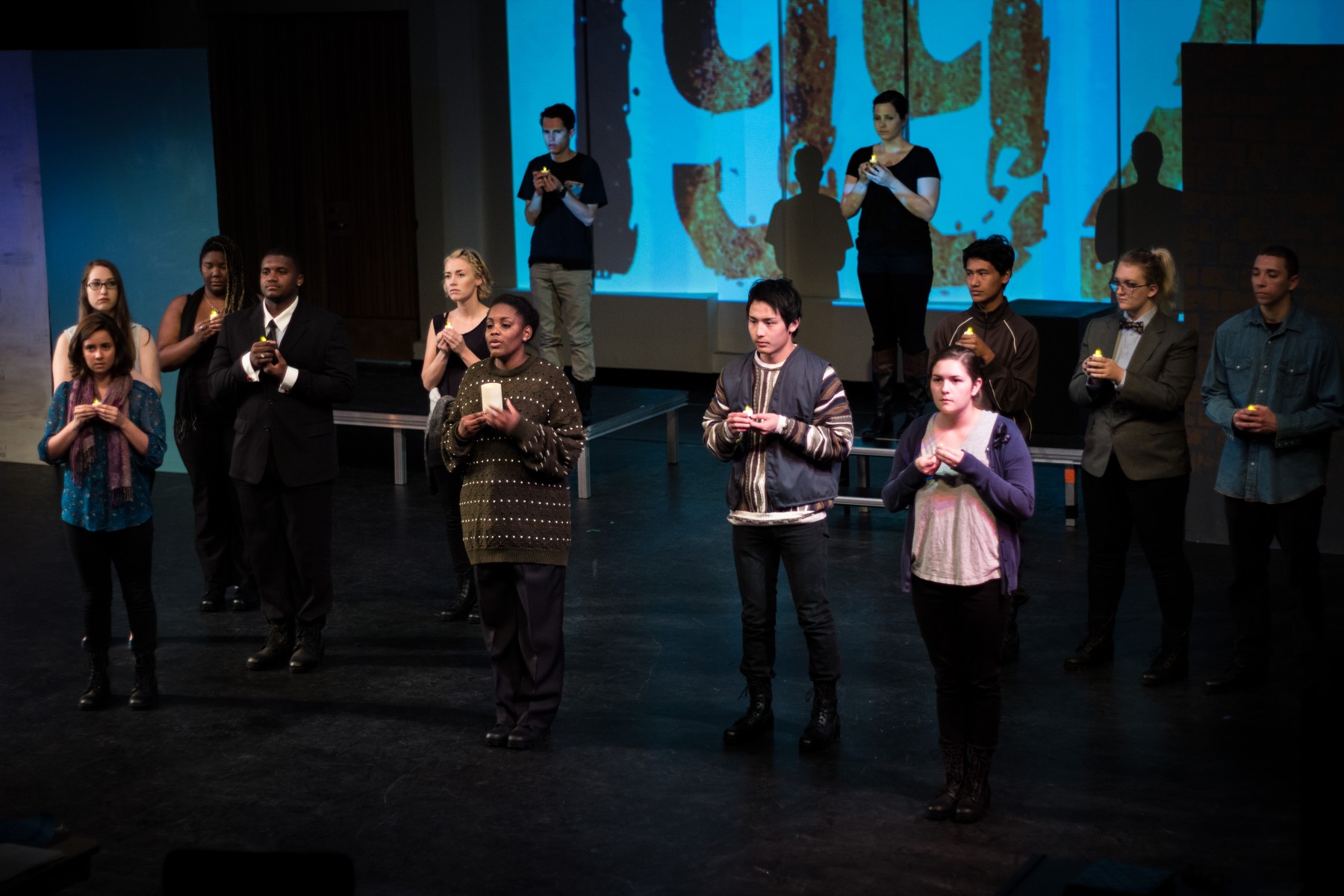 Twilight, LA: 1992
Although Twilight is traditionally a one-woman show, the CSUSM production features a small cast in which each actor plays a range of characters.

“We selected Twilight prior to the events in Ferguson and had no idea that it would be so timely,” said Dunn, “but this has provided our cast a way to dialogue together and use theatre as a platform to discuss hard topics. For the audience, we are looking forward to this production being an opportunity to facilitate additional open dialogue and have a conversation without the fear of saying the wrong thing.”

Panel discussions with faculty experts and community leaders will follow four of the performances to allow for further discussions on the topics of social justice, art, education, law and faith.

“The media often portrays incidents like Ferguson as isolated – but when you look at the history these events are very much in the pathology of America,” said Dunn. “Throughout the process, the students have been open in a way that is really mature and vulnerable – they are really extraordinary.”