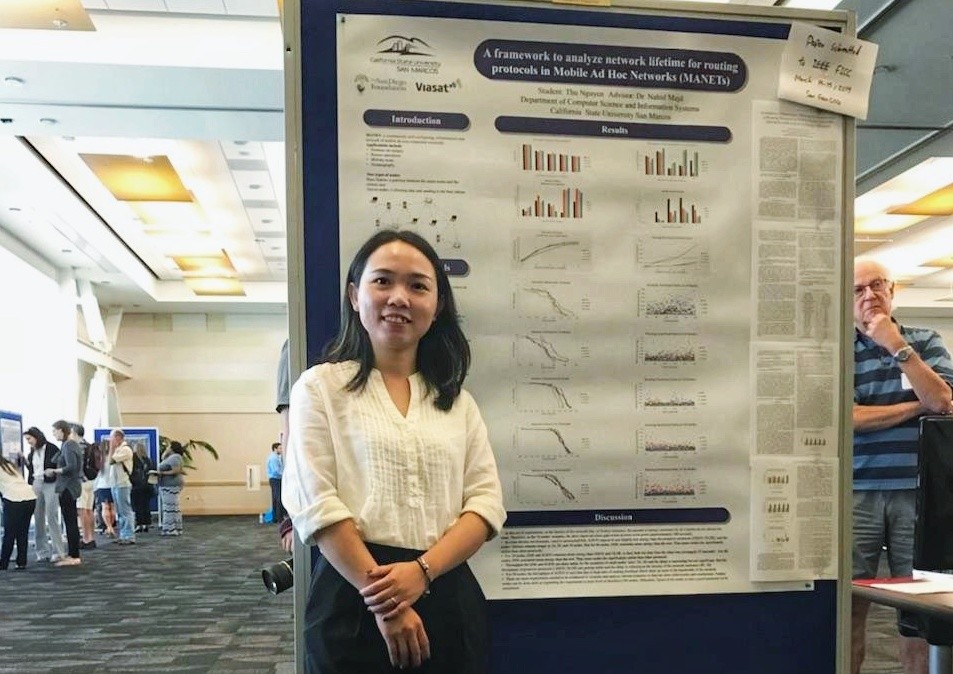 Coming from Vietnam, she had to navigate a different culture and a new language. She had a passion for computers, but little background in computer science. And, perhaps the biggest challenge of all, she was pursuing her dream with little support from family or friends back home. In fact, her parents actively lobbied against her desire to study computer science.

“They just kept telling me I should study something more useful for coming back to Vietnam,” Snyder said.

But Snyder was undeterred, and this month she achieved her longtime goal by graduating from Cal State San Marcos with a bachelor’s in computer science and information systems.

“Thu exemplifies successes of undergraduate research in our college,” said computer science professor Rika Yoshii, one of Snyder’s mentors. “Thu is of good character, diligent, hardworking and keen on learning.”

Those traits helped Snyder persist along a difficult path to obtaining her degree.

Snyder’s parents agreed to send her to the United States to study business with the expectation that she would return to Vietnam and likely work for the agricultural department in their home district. Snyder began her studies in New Hampshire, but was miserable studying a subject in which she had no interest.

Struggling with depression, she was encouraged by an adviser to examine other majors. As Snyder considered going against her parents’ wishes and pursuing her love of computer science, she heard from a friend from Vietnam who was in Southern California as part of a cultural exchange program. The friend suggested that Snyder relocate to Southern California, even offering to help her find a school to study computer science.

Snyder spent two years at Grossmont College and transferred to CSUSM on the recommendation of another friend who told her that the university’s supportive environment would make it the perfect place to continue her education.

Snyder said CSUSM’s Office of Global Education helped her continue to improve her English while also providing a community of peers who helped one another deal with common challenges. When Snyder was struggling to grasp the different tenses in English, she met a Japanese student who lent a hand. In turn, she was able to help him with pronunciation issues.

“By talking to students and learning more about different cultures with the help of the global office, I learned my problem is actually really small and can be improved over time,” Snyder said. “So I feel much better since I joined CSUSM.”

Snyder also found her place in the classroom thanks to mentors like Yoshii and fellow computer science professor Nahid Majd. While Snyder’s parents and friends from Vietnam told her that computer science isn’t for women, Yoshii and Majd showed her that it’s a field for anyone. Majd even encouraged her to apply for CSUSM’s Summer Scholars program, a 10-week experience that actively engages undergraduates in STEM research.

“That was the most amazing summer that I've ever had,” Snyder said. “I got to know so many people in the program and I got to learn a lot about the industry.”

Summer Scholars culminates each year in a poster showcase, allowing students to share the methods, results and interpretation of the work they completed. Snyder had heard about Yoshii from other students, but never had luck enrolling in any of her classes. But when Snyder saw Yoshii at the showcase, she introduced herself and told Yoshii about her interest in how people learn languages, a discussion that continued in the ensuing weeks.

“We spent hours discussing how cultures and languages are closely related,” Yoshii said. “I found her keen analysis of languages to be in-depth and intriguing.”

The discussions led Snyder to enroll in an independent research class with Yoshii as her supervisor. Snyder designed and developed a web-based tutoring system for teaching tenses to students trying to learn English.

“Dr. Yoshii and Dr. Majd were constantly helping me and reminding me how important it is to keep going, to believe in my passion and believe that you can do it,” Snyder said. “They showed me as a female that there's no limit in the computer science field. That's what I want to tell any other female students in the computer science major. It's a major for everybody as long as you have passion for it.”

Snyder is staying in the United States after graduation – she got married in 2018 – and is considering enrolling in a master’s program after gaining some work experience. Although her parents still have trouble understanding her decision to study computer science, the relationship has slowly improved after the difficulties Snyder endured when they first learned of her decision.

“A lot of people will tell you to do this or do that,” she said. “But you should never give up your dream. It’s tough, but it's worth it.”