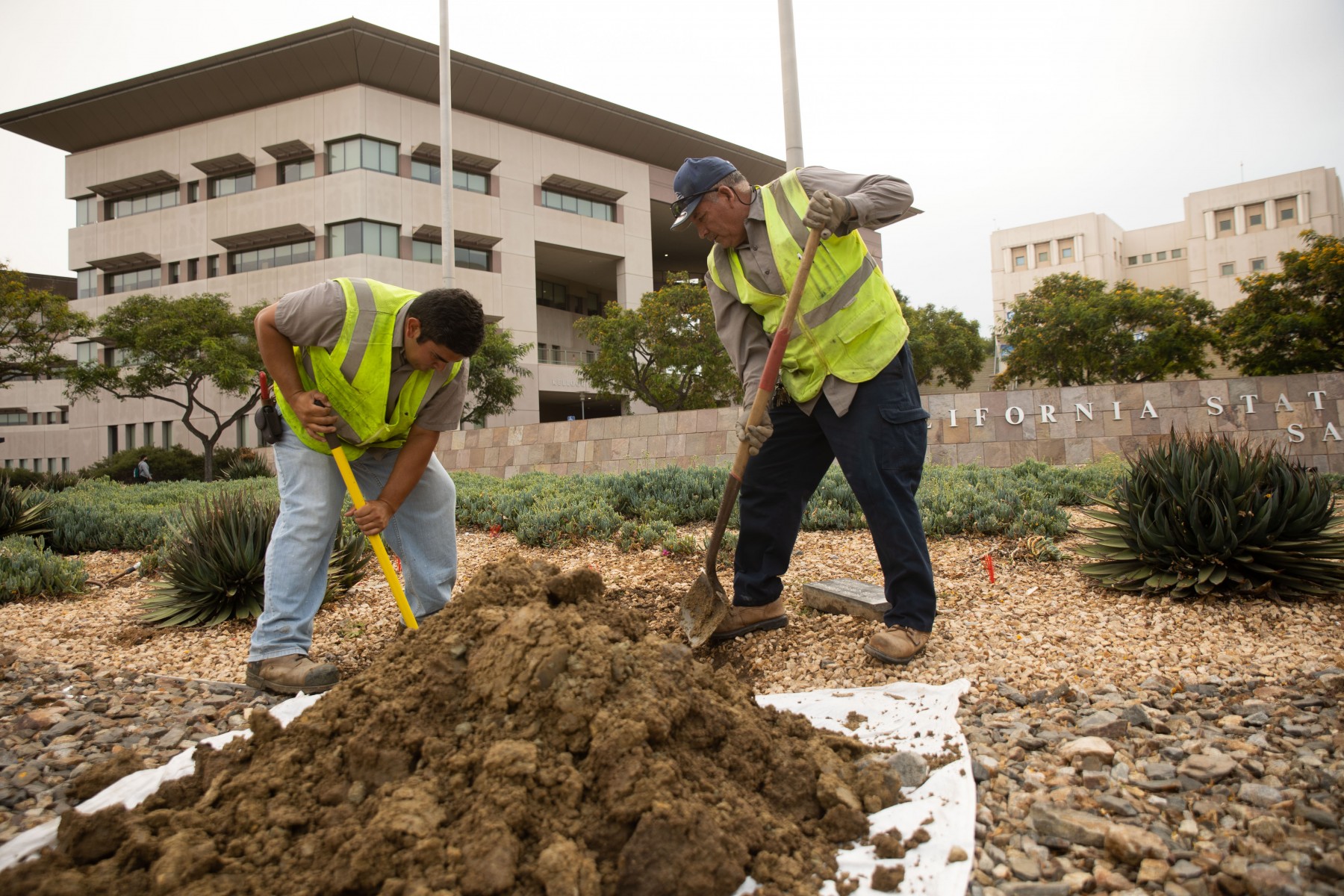 Moises Flores (left) and Ricardo Jacobo of Facilities Services dig to try to locate a time capsule in Craven Circle in July. Photo by Andrew Reed

It seemed like a simple enough assignment. A time capsule had been buried at Cal State San Marcos 25 years ago, and the location in the center of Craven Circle had been marked with a large granite plaque.

As the date of the long-awaited unveiling approached in mid-July, Ellen Hawthorne was tasked with leading a team that would excavate the capsule and catalog its contents in preparation for a formal ceremony in early August. So Hawthorne, the director of event planning, gathered two workers from Facility Services to begin digging.

They logically started at the site of the plaque, but the time capsule wasn’t there. A couple of other holes dug nearby also bore no fruit.

Hawthorne realized she had a problem. None of the people who attended the original burial in 1996 still worked at CSUSM. And no one working at the university today knew where to find the capsule.

A lead emerged in the person of a former CSUSM facilities employee who helped bury the capsule and still lives in the area. Hawthorne called the ex-employee, Mike Rivera, who remembered the capsule being small (about a foot long), close to the surface and near the edge of the circle, where the flagpoles are. Rivera even agreed to meet Hawthorne in the circle one night to spray paint a few X’s where he thought the capsule might be located.

The next day, however, proved fruitless as well, and enlisting the aid of a second ex-facilities worker (in addition to a backhoe to expedite the process) brought the group no closer to its prize. By this time, several days had elapsed and at least half a dozen holes dotted Craven Circle, eliciting looks of curiosity and confusion from campus passers-by.

“It was like a treasure hunt, but you never find the treasure,” Hawthorne said. “It was really quite a comedy of errors. And every day, (physics professor) Chuck De Leone would ride by on his bike, saying, ‘Ellen, did you find it yet?’ ‘No, we didn’t find it.’ ”

Growing with the number of empty holes was the fear that the time capsule accidentally had been dug up or damaged when the circle had undergone re-landscaping about five years earlier. Close to throwing up her hands in defeat, Hawthorne got approval to hire a company that uses ground-penetrating radar to unearth buried items.

Sure enough, the radar did its job and pinpointed the capsule, about 6 feet away from where the initial hole had been dug. As it turned out, the stone marker had inadvertently been moved during the landscaping project.

What did the team expect to see underground? It was mostly a mystery. Among the few things known were that the time capsule was a PVC cylinder donated by the local Vallecitos Water District and that it was buried in August 1996. It was dedicated to “Uncle” Henry Rodriguez, a Luiseño elder who served as a significant community consultant to CSUSM since its founding and who attended the burial ceremony with then-President Bill Stacy and several other local leaders.

According to The Pride newspaper (the forerunner to the Cougar Chronicle), which covered the event, the capsule was filled with “photographs, historic maps, news clippings, letters to the future, catalogs, research papers, poetry, issues of The Pride and other memorabilia.” But no formal inventory was ever made by Associated Students (no “Inc.” yet), which collected the items.

Judith Downie was a library staff member back in 1996 but was not involved in the time capsule process. This summer, though, Downie was to be heavily involved; as a longtime history and Special Collections librarian, she would be gathering the materials in the tube and archiving them for posterity.

Downie was one of about a dozen people present for the surfacing of the capsule. When she noticed water starting to fill up the hole, she assumed that a sprinkler line had been struck.

“Someone said, ‘No, it’s coming out of the time capsule,’ ” Downie said. “I really thought I was going to throw up. My heart dropped, and I was like, ‘Please, let them be wrong.’ But then I could see that the seal had cracked and that water was pouring out. When they pulled the tube out, they had to take most things out of the capsule, and I saw these sodden garbage bags, and I said, ‘It’s done, there’s nothing here.’ ”

Well, there was something. There was a repulsively foul smell emanating from the cylinder, which turned out to be 5 feet long and 16 inches in diameter. There were blocks of mud that used to be sheets of paper. There were live earthworms.

“It was quite an acidic soup from the water and the soil blended together,” Downie said.

As a librarian, Downie loves a good preservation challenge, and her attitude quickly switched from despondence to determination as she put on what she calls her “How can I save this?” hat. The entire capsule, mess that it was, got transferred to the loading dock of the Kellogg Library, where Downie set up folding tables and went to work with Sean Visintainer, head of Special Collections, who dressed himself in clear plastic bags to keep from getting too muddy.

Over several days, they brought all their skills to bear on an overwhelming salvaging operation. Downie, for example, was able to save three nearly disintegrated T-shirts by washing them by hand in her bathtub with an archivally approved cleaning agent. Other items that survived include old student parking permits, a CSUSM pennant and an alumni bumper sticker. One of the end caps of the tube was signed by some of the students who organized the capsule 25 years ago.

The material that was best preserved was 147 pieces of paper, stored in heavy-duty plastic and compiled by Uncle Henry himself. They consisted of newspaper clippings and legislation and testimony related to water rights for the local tribes, which was a major concern of Rodriguez’s. For his work on behalf of CSUSM, he received an honorary doctorate from the university in 2001 and died a year later at age 82.

Tishmall Turner, tribal liaison for CSUSM, said Rodriguez would be inspired by the evolution of the university into one that boasts a center for California Indian culture and sovereignty, an American Indian studies major, and the highest percentage of American Indian students in the 23-campus CSU system.

“I think that he would be very proud of the commitment that Cal State San Marcos has made to honor the local indigenous people, and that he probably wouldn't have thought that this relationship would look like what it does 25 years later,” Turner said. “That short time of his investment in CSUSM has really benefited our campus community and its knowledge of the Luiseño people, the traditional homelands of where the university is built.”

The items that Downie and Visintainer preserved will be stored in an archive within Special Collections. But Downie had trouble not dwelling over the things that had to be discarded and will be lost to history. Three envelopes of photographs in which the ink had run, rendering them indecipherable. A photo album with sheets featuring an adhesive that turned to glue. A binder of letters and pictures solicited from community members that was overrun by mold.

“These were all originals, and I’m sure there are no copies anywhere,” Downie said. “A lot of those people are no longer with us, so there’s no way to piece it back together. There was a lot of mourning. It was like, ‘All these pictures are gone, I don’t know what they were, and I’m very sad about that.’ ”

Downie said the students who supervised the time capsule in 1996 surely meant well, but that the planning would have benefited greatly from the input of a librarian with archival or preservation expertise.

“Materials could have been more securely packaged, and I think questions would have been raised about the design of the capsule and how it was sealed,” she said. “I talk to lots of other archivists who have dealt with damaged time capsule contents — it seems to be a common occurrence. It’s pretty much the same story. Not to knock anyone, but preservation for the long term isn’t that simple. This is like wiring a house; you want someone who is trained.”