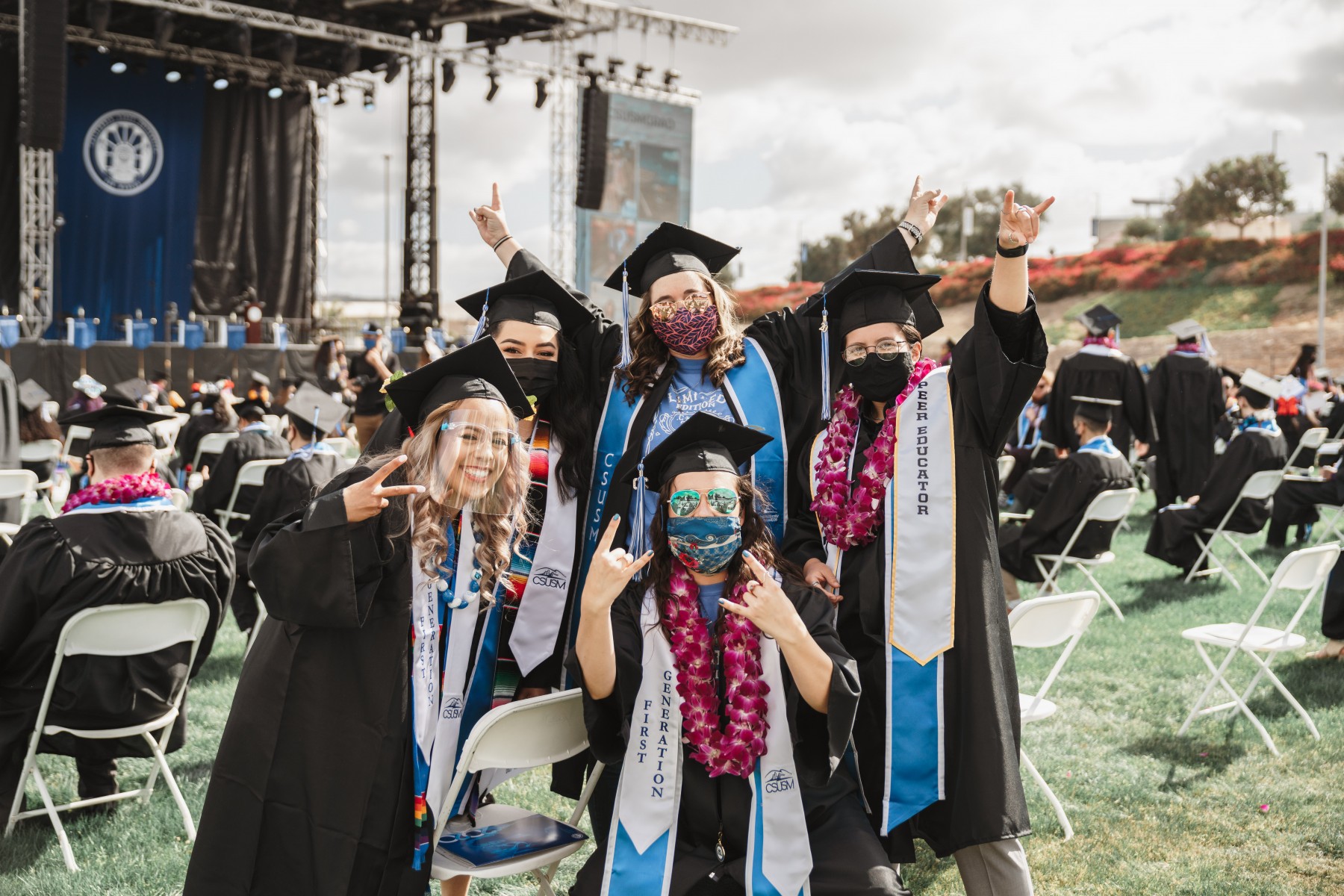 Students celebrate during the commencement ceremony for the College of Science, Technology, Engineering and Mathematics last Saturday.

It was an action-packed weekend of celebration at Cal State San Marcos.

More than 3,000 graduates were in attendance last Saturday and Sunday as CSUSM welcomed back in-person commencement for the first time in two years. The university hosted three ceremonies on Saturday and two more on Sunday, with an estimated total of almost 10,000 people on hand for the festivities.

The commencement saluted the graduating classes of both 2021 (which numbered 4,592 students) and 2020 (4,618). The latter group of students saw their in-person celebration postponed last year because of the coronavirus pandemic. At the time, President Ellen Neufeldt promised the Class of 2020 that CSUSM would recognize them and their accomplishments as soon as it was deemed safe to do so.

That’s exactly what happened last weekend, as each ceremony featured not only a mix of students from both graduating classes, but also a public speaker from each of the classes.

It also marked the first commencement for Neufeldt, who arrived at CSUSM a couple of months after the graduation ceremonies of 2019.

Public health guidelines were in place last weekend. Each graduate was limited to bringing two guests, and seats within the venue were separated by 6 feet. All attendees were required to wear a face covering while on the campus property.

The weekend commencement ceremonies were preceded Friday morning by a different, but no less spirited, celebration of graduates. For the second year in a row, CSUSM hosted Graduates on Parade, a special event in which graduates decorate their car and join members of their immediate household to parade the streets of campus in a route lined by faculty and staff. Almost 800 students participated this year.

Epstein is the founder of The ConAm Group, one of the top apartment management/ownership firms in the country, and a longtime supporter of CSUSM who has made multiple transformational gifts to the university. In recognition of the $1 million gift that the Epstein Family Foundation made to CSUSM’s Veterans Center in 2017, the building was renamed the Epstein Family Veterans Center.

McElroy is the founder and president of Alpha Project, an organization with more than three decades of service to people in need. Aiming to break the cycle of homelessness, Alpha Project offers more than two dozen programs throughout San Diego County and beyond, with more than 250 employees who collectively serve in excess of 4,000 people each day.

Wagner is co-founder and president of Stone Brewing Co., one of the biggest craft beer companies in America. He has been an annual supporter of the university’s Student Philanthropy Council since its inception in 2011, and he and his wife, Laura, have helped build a culture of philanthropy on campus through their support of CSUSM Giving Day.

When he transferred to Cal State San Marcos from Grossmont College in August, John W. Edwards III had no idea what service learning was.Even when he was exposed to the concept early in his EDUC 364 course, he understood it mainly as a 20-hour …
Read more

Sally Ride inspired a generation and beyond to pursue one’s dreams no matter the obstacles.The first American woman and youngest American in space, Ride made her journey into history on June 18, 1983 as a crew member aboard the space …
Read more
NewsCenter