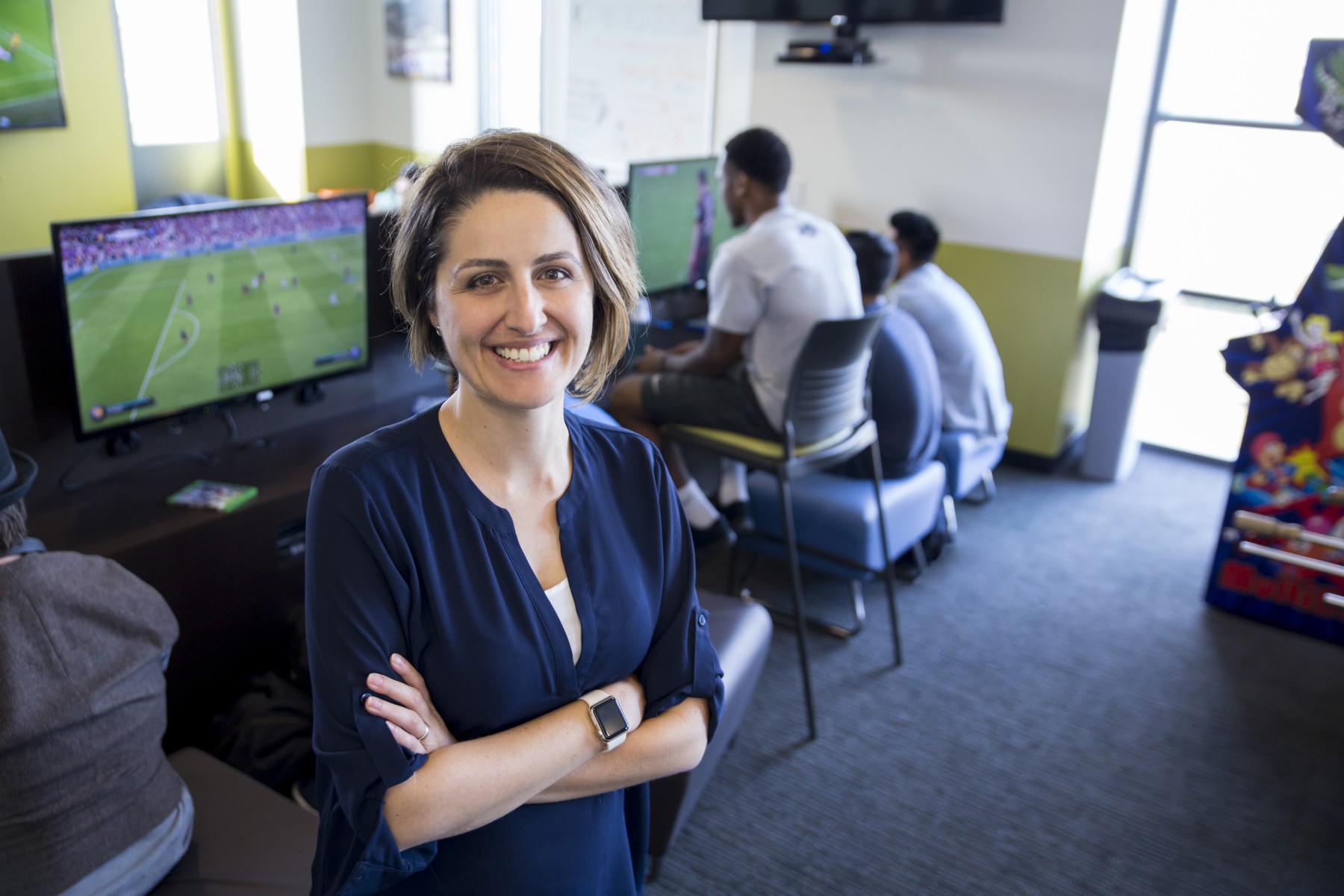 Sinem Siyahhan is used to receiving incredulous looks when she refers to the first-person shooter video game “Halo” as family friendly.

But Siyahhan, an assistant professor of educational technology and learning sciences in Cal State San Marcos’ School of Education, looks beyond the content of video games. Her research on video games and families has been featured on “Forbes Magazine Blog,” “Slate” and “Nick Junior.” And she recently gave a keynote on the topic at the “Games, Learning, and Society” conference.

With most games, including “Halo,” she sees numerous learning opportunities.

“People tend to focus on the content of video games,” Siyahhan said. “Is this game designed to be educational or just to entertain? But if they just step back, they’ll see that any game could be educational. It’s just a matter of your approach.”

In the last decade, Siyahhan has put that philosophy into work with projects like “Families@Play” where she has been designing game-based experiences around commercial games to support family learning. More recently, she was awarded a National Science Foundation EAGER grant for a project titled, “Play in the Making: Supporting Design Thinking in Maker Spaces among Underrepresented, Underserved, and Minority Students through Game Design.”

The project’s goal is to develop a teaching and learning model to expand Science, Technology, Engineering and Math (STEM) and Making through game design for girls and minority middle school students from low-income backgrounds. Siyahhan will collaborate with three teachers at Vista Magnet Middle School while her collaborator, Elisabeth Gee from Arizona State University, works with three librarians in Phoenix.

Siyahhan will be introducing game design as a framework in the Maker spaces at each site to see if that helps to engage underserved populations. She is designing challenges in which students will create a game using both low and high tech. For example, they could design a board game and print the pieces using a 3D printer. An additional unique component of the project is that it will engage parents in the process.

The grant is an extension of Siyahhan’s ongoing collaboration with Vista Magnet Middle School where she has been running an after-school game design program for the past two years. This year, she is expanding the project to other elementary and middle schools in North County by engaging undergraduate students in the process of designing and implementing game design activities in K-12 schools.

“My research shows that video games can be a context to bring parents and kids together,” said Siyahhan, whose book “Play to Connect: How Video Games Support Family Learning, Connection and Communication” is scheduled for release in fall 2017 from MIT Press.

“We have all this rhetoric and coverage in popular media of how video games are a point of controversy or disagreements between parents and kids. But there are households where that’s not the case. I highlight those cases in my book and look at how games bring people together.” 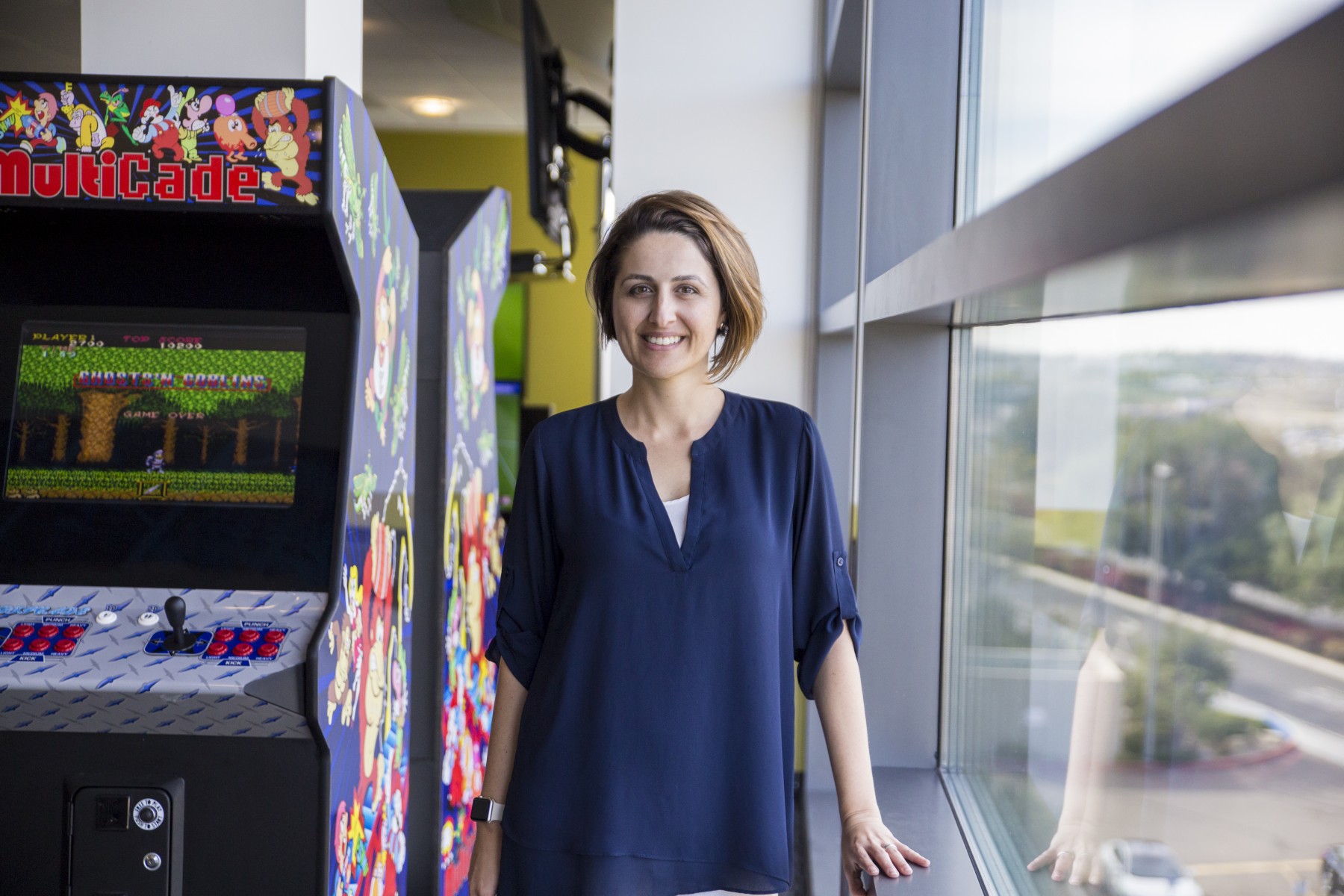 Siyahhan played video games as a child, but it was while pursuing her Ph.D. at Indiana University that she rediscovered her passion for them and came to understand games as a context for learning and development.

Siyahhan began her Ph.D. program focused on family learning and designing experiences to see how conversations between parents and children shifted in meaningful ways. But her observation during a research project at The Children’s Museum of Indianapolis in 2006 was a turning point.

The project was designed to observe how parents and children discussed art and science at an exhibit about glass blowing and glass art.

The observed family conversations were largely uneventful -- until participants reached a portion of the exhibit that featured a video game.

“The conversation between parents and children peaked when they were playing the game,” she said. “That’s when a lightbulb went off in my head and I realized there was something about video games that I could use to support family learning.”

At the time, there was only one option for a video game project at Indiana, so Siyahhan showed up unannounced at the office of professor Sasha Barab and told him she wanted to design games for families.

“He looked at me like I was crazy,” she said. “People working on his project are actually creating 3D games and here I am saying, ‘I have this idea. Could you let me into your project?’ ”

Siyahhan had neither a computer science background nor game design experience, leaving Barab to wonder what she could possibly contribute. But Siyahhan persisted. With a bachelor’s in comparative literature, she offered to write characters, dialogue and stories for Barab’s games. She even said she would work for free for six months to prove that she was serious about learning game design.

Barab agreed and Siyahhan eventually began designing her own games, including one called “Family Quest” that became her dissertation in 2011.

“With video games, you take an action and the system gives you feedback,” she said. “That’s unique and powerful. Parents and kids can play together, they take an action and the system either acts the way they predicted or something surprising happens. That becomes a point for conversation to say, ‘Why did that happen?’ or ‘What can we do next?’ The conversation just comes naturally. That’s unique compared to books or television.”

Siyahhan still plays video games, counting “SimCity,” “Uncharted” and “Fable” among her favorites. Recently, her experience with “SimCity,” in which the player acts as a mayor responsible for developing a city, helped her gain insights into what is happening in San Marcos. The virtual experience of everything from building houses and roads to managing taxes had some real-world application.

“I received a notification about a city council meeting to discuss the recent housing development on Twin Oaks and how to grow the city in a responsible and sustainable way,” she said. “I had this epiphany that the same things that I had to manage and consider while playing ‘SimCity’ were the same things that were relevant to the discussion about San Marcos.

“This is just one example of how playing video games, even the ones designed to entertain, can help people develop appreciation of real-world issues. It can be as stimulating for adults as kids.”