Owning Insecurities: What I Be Project Comes to CSUSM 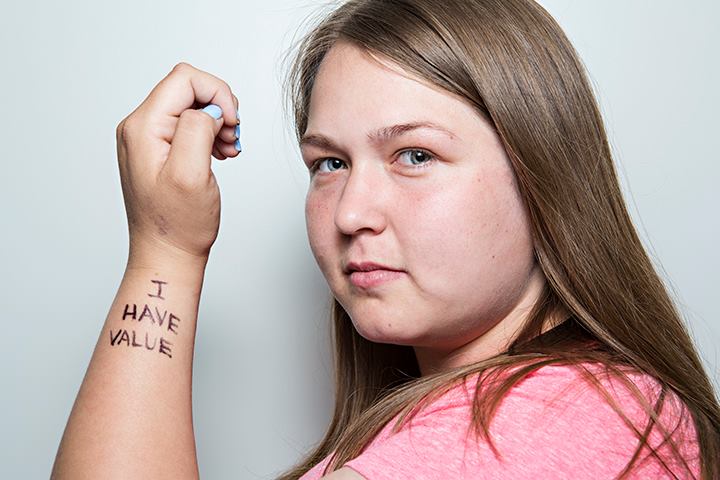 "I am not my sexual assault."
Photo by Steve Rosenfield for the What I Be Project at CSUSM

If you walked into a room of 100 people, what is something you would want them to know about you?

This is the first question that photographer Steve Rosenfield posed to individuals he interviewed when he brought the “What I Be” photography project to CSUSM’s campus last month.

The project, which started as a social experiment, has evolved into a global movement about honesty and empowerment featuring individuals photographed with their deepest insecurities written visibly on their face, arms or hands. Rosenfield travels around the country to high schools, ivy leagues and even to yoga studios with his project, helping people see their true selves, not as society sees and judges them.

“Subjects put their insecurities out in the open, and expose a side of themselves that nobody has seen before,” shared Rosenfield. “By stating ‘I am not my_____,’ they are claiming that they do in fact struggle with these issues, but it does not define who they are as a person.”

Rosenfield spent two days at CSUSM on April 11 and 12, holding one-on-one interviews to help individuals identify and express their deepest insecurity. He then photographed each person with that insecurity written visibly on their face, hands or arms, accompanied by the caption, “I am not my ______.”

Alex Sanders, a member of the ASI Campus Activities Board, in partnership with the ASI Community Centers, SHCS, and the USU Activities Board helped bring Rosenfield to campus. after hearing about his work in high school and was excited about the opportunity to participate in the project at CSUSM.

“At first I was pretty uncomfortable,” shared Sanders. “He took something that I usually hide from people, wrote it on my face and put it up on the internet. But as I thought about it, it made me feel free.”

A full album of the CSUSM “What I Be” project photos can be found here. For more about the What I Be project, visit http://whatibeproject.com.

Owning Insecurities: What I Be Project Comes to CSUSM