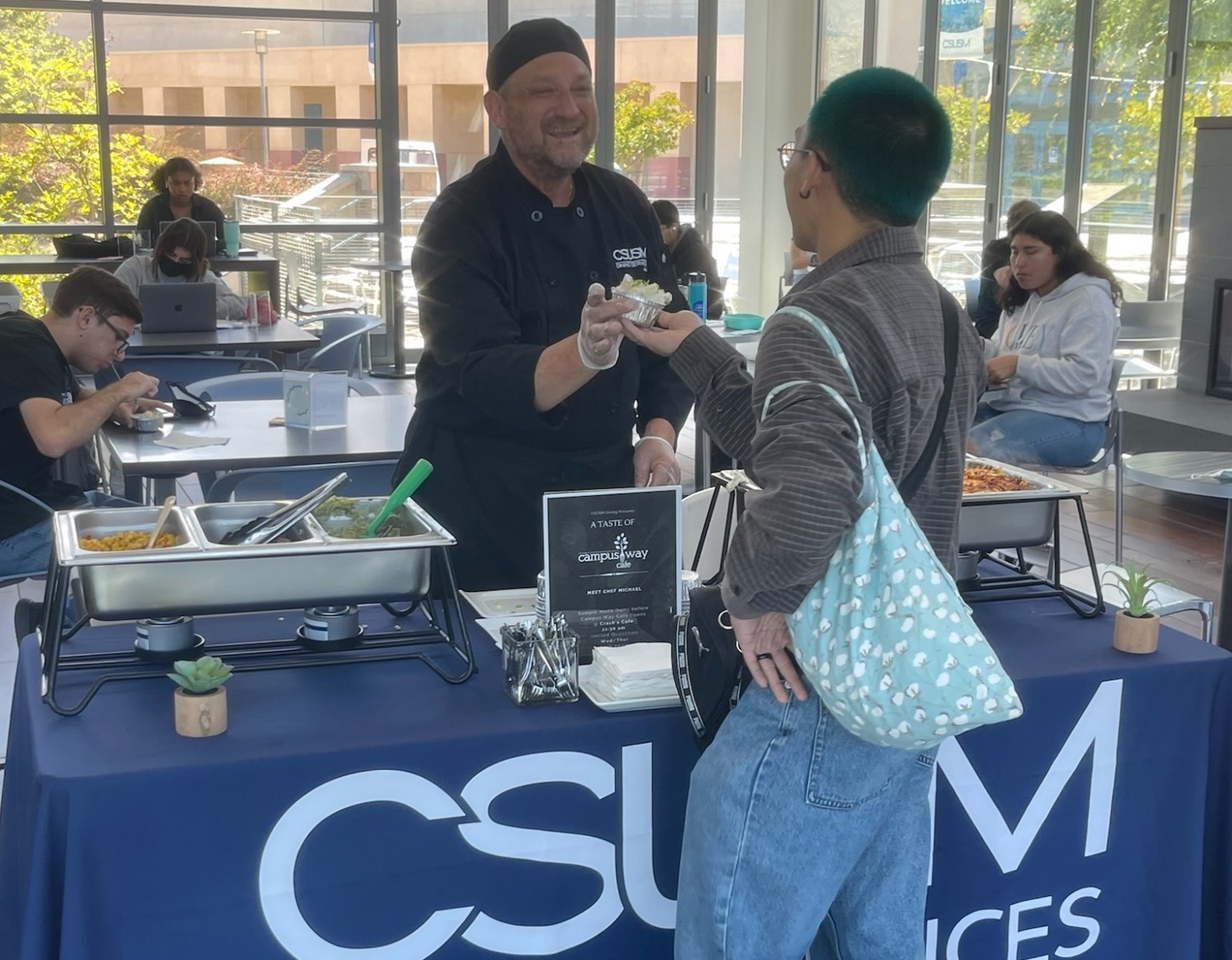 Students had an opportunity to sample food from Mike Feil, the chef for CSUSM's new on-campus dining hall, in late April and early May.

Mike Feil’s work as a chef has taken him across the country – and back.

While Feil has worked in well-known destinations like Hawaii, San Francisco and Santa Barbara, he also has honed his craft in lesser-known places, from a remote fishing lodge near the Yentna River in Alaska to Coeur d'Alene, Idaho, to Apalachicola, Florida, on the Gulf of Mexico.

But Feil is enjoying a homecoming of sorts after being hired as the executive chef for CSUSM Dining, which includes the Campus Way Cafe, Cal State San Marcos’ new 8,000-square-foot dining hall that will open on the first floor of The QUAD in time for the fall semester.

“I have an eclectic mix that deals with not only Pacific Rim food and food from the Americas but Indian and all different types of international food,” said Feil, who will also be developing catering menus and overseeing the catering operations for campus events. “So there will be quite a variety to choose from.”

Working with food was a natural for Feil, who gained an appreciation of it at an early age. His grandparents were bakers from Germany, and he was raised on a small farm in Alpine, about 50 miles southeast of CSUSM. His childhood included milking goats and helping his family produce farm-raised beef, pork and turkey.

Feil earned his bachelor’s in psychology from Chico State and worked in the food industry in San Francisco after graduating before deciding to attend culinary school. A mentor recommended New York, and Feil attended the Culinary Institute of America, which is widely recognized as one of the premier culinary schools in the world.

Feil used his passion for cooking to travel the country, including nearly a decade as a caterer in Maui, where he focused on plant-based foods. He also has experience on college campuses, including San Diego State and Point Loma Nazarene University.

CSUSM was a perfect fit for Feil, who loved his time working with college students, faculty and staff. He also was already familiar with Sodexo, which manages food services at both CSUSM and Point Loma Nazarene, where he worked as a production chef.

Now, Feil is busy preparing for the opening of Campus Way Cafe. He has been taking managerial classes that delve into creating menus and food costing while also working with Sodexo and CSUSM Corporation on details related to the café – everything from the configuration to plateware to the look of the space.

The cafe will have indoor and outdoor seating for about 300 people. Overseen by CSUSM Corporation and operated by Sodexo, the cafe will serve breakfast, lunch and dinner five days a week, brunch and dinner on the weekends, and will be open to students, faculty, staff, guests and the San Marcos community.

Feil will bring a wide variety of food options to the cafe, which will be all-you-care-to-eat with a rotating menu and specials. There will also be opportunities to host events, gatherings and cooking classes within the facility.

While the cafe’s expanded food offerings will include a grill, a deli, and pasta, pizza and salad stations, Feil is especially excited about the plant-based options. He noted that tastes and priorities have changed for college students since he was at San Diego State a decade ago.

“The diet was different for college students then,” he said. “They didn't have quite the knowledge that they have now about food. So you're seeing these plant-based ideas becoming more mainstream. More people are understanding the benefit of eating certain foods.

“The idea of creating a menu that is configured to this atmosphere with these students and the newest kind of trends involving plant-based food, involving food that's healthy, that has a footprint that is smaller than normal, perhaps utilizing some local farmers in the area, it's exciting.”

Sunita Puri, a palliative medicine physician and author whose work has appeared in the New York Times, will be the keynote speaker at the fifth annual Professional Palliative Care Conference on the …
Read more