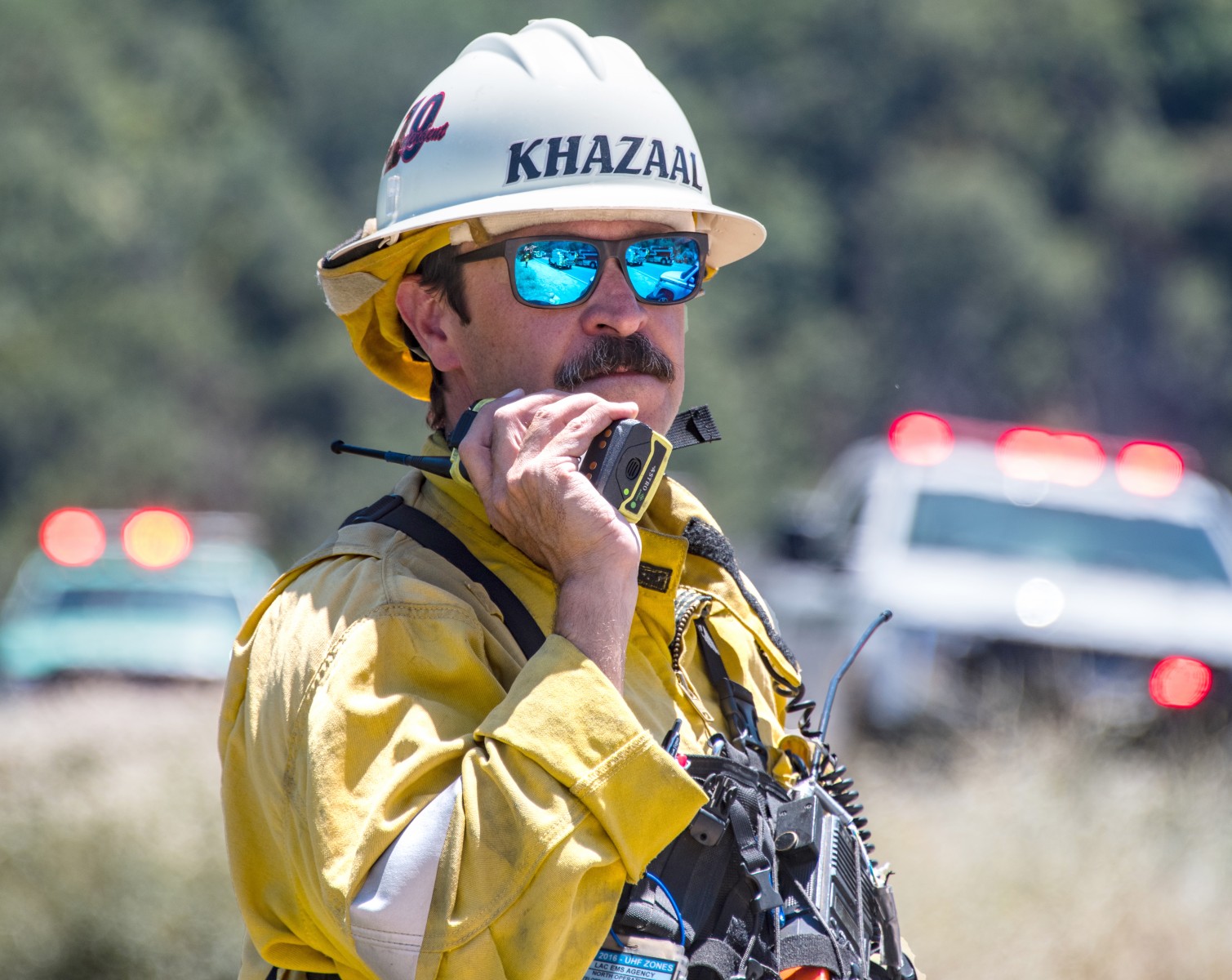 On Oct. 10, 2019, the Saddle Ridge fire erupted in northern Los Angeles just as residents were settling in for the night. Over the next 20 days, the wildfire incinerated 8,799 acres, damaged or destroyed 107 structures, injured eight people and caused one fatality. At its peak, the fire torched 800 acres an hour. Mandatory evacuation orders went out to 100,000 residents. More than 1,000 firefighters fought the blaze, including Mo Khazaal and his crews.

With the Los Angeles County Fire Department for 20 years, Khazaal is a fire captain who leads six wildland firefighting crews as a camp superintendent. He is also a student in Cal State San Marcos’ online BS in Wildfire Science and the Urban Interface. In the midst of the Saddle Ridge fire, he suddenly faced a conflict.

“It got pretty sketchy for me,” Khazaal said. “I had very minimal downtime and I had finals coming. I remember thinking, ‘I can either sleep, shower or take my finals, but I can’t do all three.’ ”

Fortunately, because the program is structured with firefighters’ needs in mind, Khazaal was able to defer his finals and get the sleep and shower he desperately needed.

“I’m always one phone call away from leaving for two weeks,” said Khazaal, who is in the online program’s first cohort. “The professors have all been so flexible and understanding with our schedules.”

CSUSM’s BS in Wildfire Science and the Urban Interface was developed in response to the increasing fire threat to wildlands and the wildland-urban interface (WUI), spaces where houses and other community structures are in or near undeveloped wildlands.

A 2018 study published in the “Proceedings of the National Academy of Sciences” shows that between 1990 and 2010, the WUI expanded nationally by 46 million acres and nearly 13 million houses. California leads the nation in terms of people (11 million, or 25% of the state’s population) and structures (4.46 million) in the WUI [USDA/U.S. Forest Service].

As the WUI continues to expand, the danger of wildland fires escalates. In every year since 2000, annual averages show that 71,300 wildfires burned a total of 6.9 million acres nationally, double the average 3.3 million acres burned annually in the 1990s, according to the National Interagency Fire Center.

The BS in Wildfire Science emerged from a recommendation among industry leaders to improve research and firefighter education regarding wildfire strategies in the wildland-urban interface.

In addition to covering key topics of wildfire science and operations, the curriculum explores critical issues such as firefighter mental and behavioral health, firefighter health and safety, emerging topics and technologies, as well as policy and law.

“The fire service is getting to be more academic,” said Khazaal, who also serves as a wildland fire lead instructor for the L.A. County Fire Department. “I wanted to learn from the foremost experts in the field, academia and peer-reviewed journals so I can take that to my classroom.”

A key goal of the program is for students to elevate their skills and build knowledge in the field by developing research. Current research projects focus on firefighting protective gear, contamination risk and personal protective equipment (PPE), sleep deprivation and more.

For Khazaal, who has served as a paramedic, firefighter, engineer, fire captain and camp superintendent, education is about career options and much more. It’s personal.

“We get to marry up the boots-on-the-ground experience with research, all for the purpose of making it safer for my crews and myself when we are out there,” Khazaal said. “My ultimate goal is to use the research to make fatalities and tragedies less and less frequent, and that’s why I jumped at the chance to take this bachelor’s program specific to wildland fire.”

Khazaal’s final research project is on accident causation models in aviation and medicine because, like in firefighting, “when they have a bad day, people die,” he says. “I’m applying the models to firefighting to see which ones can help us make the best decisions in the moment and realize as early as possible when something is headed toward a catastrophic event.”

The end goal is always about getting the crew home safely.

“Whether we are on an initial attack or a long strike team, coming back safe with my crew, and knowing we did some really hard things and that we did a lot of good for that incident … that is the most satisfying part of the job,” he said.

“A lot of times, we come back in the dark of night to our quiet little camp and nobody even knew we were gone. And we’re OK with that.”

For more information about the fully online BS in Wildfire Science and the Urban Interface, visit csusm.edu/el/wildfire.