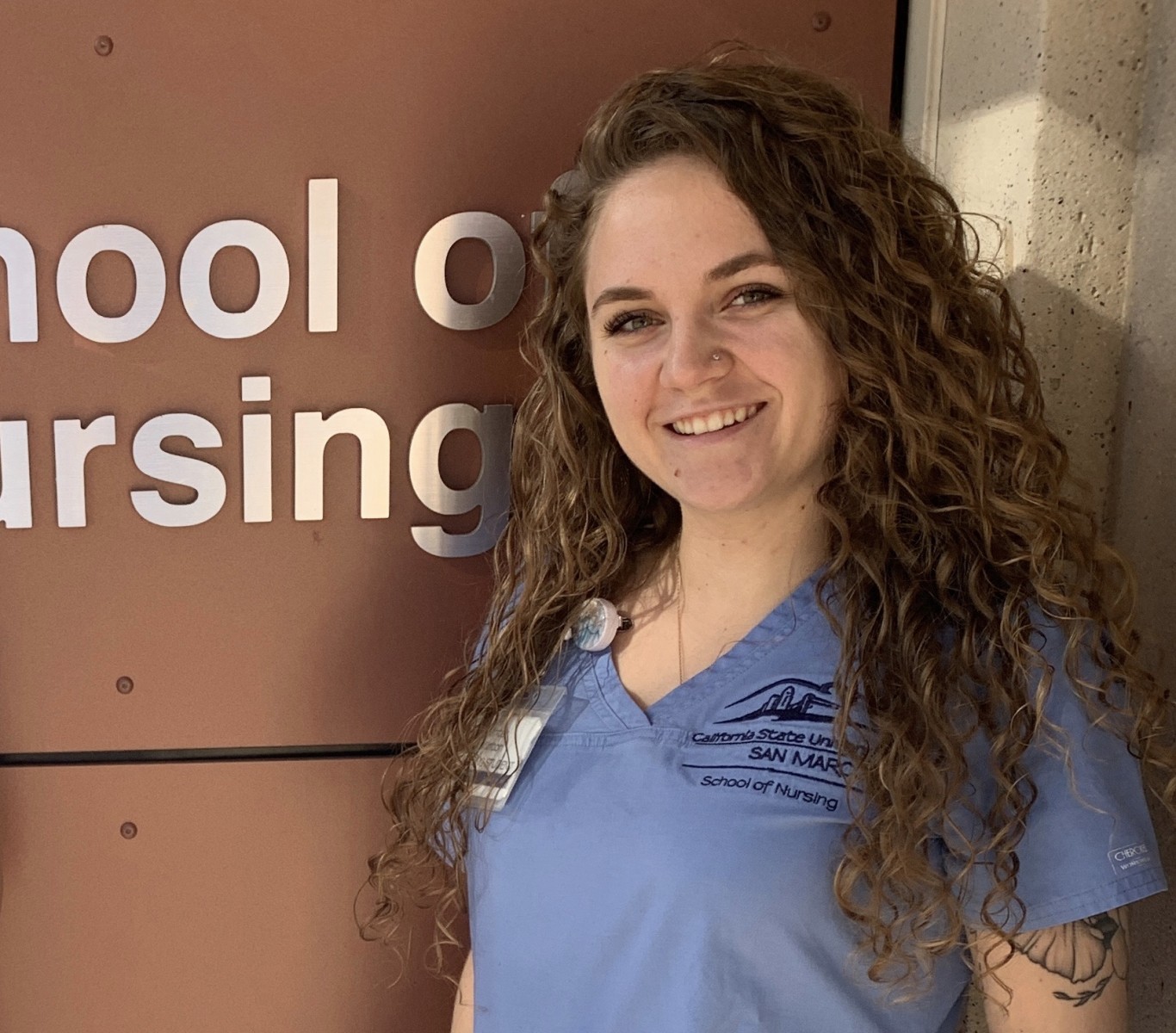 Winter Minton is part of a graduating class that is helping ACE Scholars Services surpass 100 graduates since its founding in 2007.

On Sunday afternoon on Cal State San Marcos’ Mangrum Track & Field, nursing students in the College of Education, Health & Human Services will walk across the commencement stage to celebrate the conclusion of a lengthy and rewarding journey.

Pictures will be taken, presents given. Leis and bouquets of flowers will be exchanged between proud parents and joyful graduates.

A moment four years in the making will be captured and celebrated for the amazing accomplishment it is.

And somewhere on the field, Winter Minton will smile while reading her name on the diploma. For she’ll know the road less paved – one chosen both for her and by her at various times in her life – has led her to accomplishing something few could have predicted.

“I believe that Winter’s journey is inspiring,” said Laurie Orr, a licensed clinical social worker and counselor with ACE Scholars Services on campus.

Minton’s story is one of inspiration through the lens of darkness. It’s a tale of adversity even when life tells you you’re not good enough.

Because her mother has been a drug addict throughout Minton’s life, she spent pretty much every year until the age of 17 in the Riverside County foster care system. While she is thankful to have had “great placements,” she also was placed in living situations where she was abused.

Chaotic interpersonal relationships, academic struggles and feelings of neglect and abandonment can be common for children who spend a great deal of their lives in the foster care system like Minton did.

It’s often a tumultuous path to travel. In addition to changing homes multiple times, Minton switched schools the same amount of times. That resulted in disruption and confusion at developmental ages where consistency, stability and love are paramount.

But there’s something about the human spirit that grows even under the darkest of skies.

Despite the chaos, Minton had goals at an early age. One of the main ones she never lost was her desire to become a nurse.

“I decided to become a nurse during my time in the system,” Minton said. “I wanted to help as many people as I could and knew this profession would do just that.”

Minton learned from her social worker about ACE Scholars Services, which provides support and programs for former foster youth now enrolled at CSUSM. It aims to transform lives through higher education. Currently, the rate of former foster youth who graduate from college is lower than 10 percent. ACE aims to greatly improve that rate, and Minton is part of a class that has pushed the number of ACE graduates over 100 since its founding in 2007.

Minton entered CSUSM and ACE from the foster care system as a freshman for the summer bridge program in 2015.

“Her goal was to become a registered nurse, sharing that, ‘This is what I have always wanted my whole life,’ ” Orr said. “And it was clear from the moment we met that she was determined to reach that goal. I have observed Winter to be serious and focused when it comes to her studies. I also know her to be compassionate, caring and highly motivated to succeed.”

Although Minton was used to facing challenges head on, she also had to deal with the disappointment of not being admitted to the highly competitive School of Nursing upon her admission to CSUSM. Despite completing all the pre-nursing coursework, the road was made longer before it even began.

But that didn’t stop Minton.

She changed her major to human development with a plan to enter the accelerated nursing program. Her drive and passion for becoming a nurse came to the attention of the director of the School of Nursing. She was so impressed when she met Minton that she was offered admission to the school for fall 2018.

“Although she was deeply disappointed when she initially was not admitted to the highly competitive School of Nursing, Winter did not give up on her dream,” Orr said. “She doubled down and worked hard to change her academic trajectory. ACE Scholars Services believed in Winter’s potential and supported her throughout her journey, encouraging Winter to keep pushing forward toward her goals.”

Minton successfully completed six years of study at CSUSM and will graduate this weekend with a bachelor’s in nursing.

After graduation, she will prepare for the California Board of Registered Nursing licensing exam in order to become a licensed registered nurse. Upon passing, she’ll apply to hospitals throughout San Diego with hopes to become a labor and delivery nurse.

“I believe my inner strength and perseverance comes from the hardships I endured,” Minton said. “I wanted to break the cycle of drug addiction and have a well-respected profession. I aspire to have a family of my own day, and I want to give them everything I did not have growing up. I wanted to become someone great. I knew I wanted to make a positive impact on people's lives.”