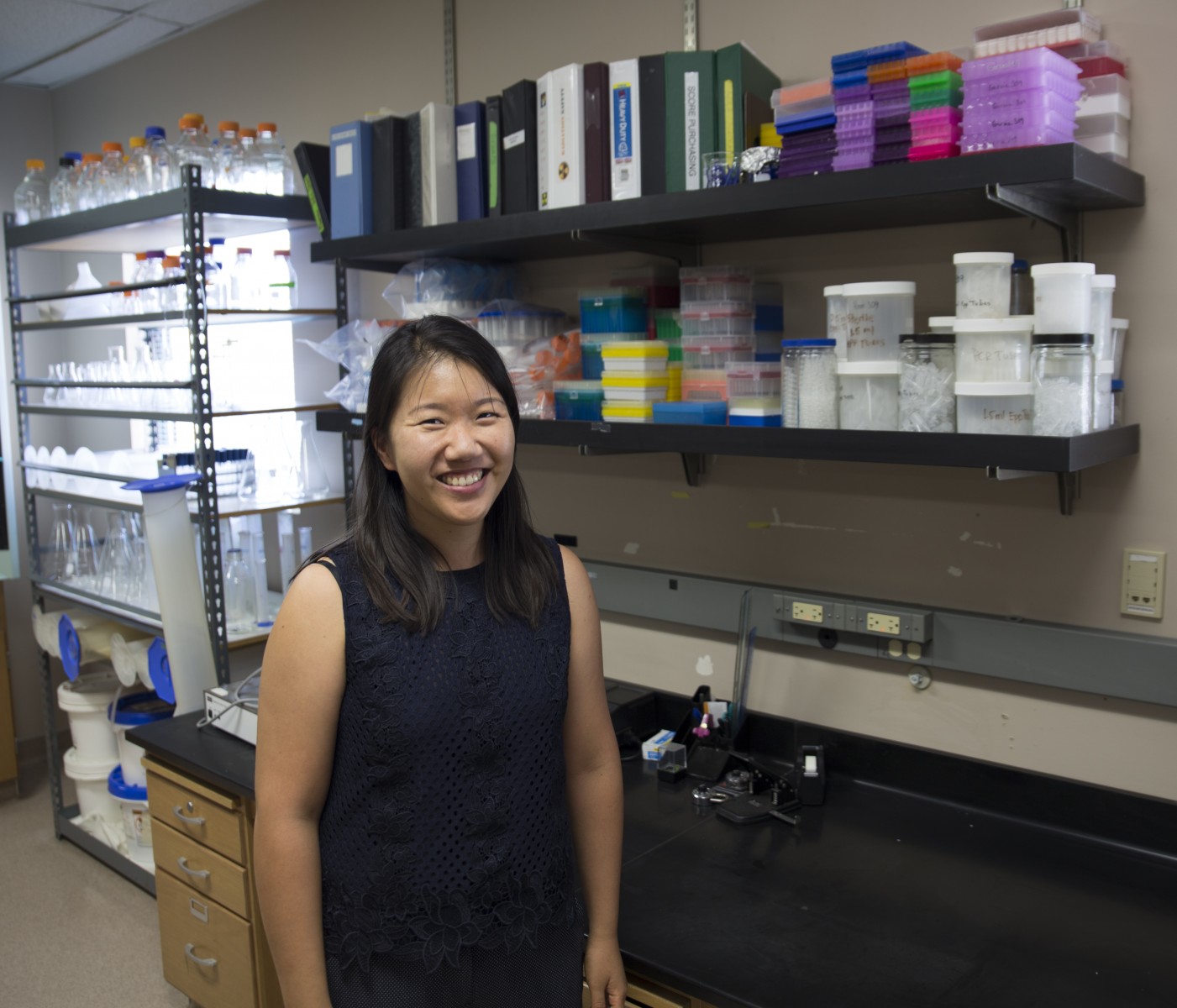 Jane Kim said there is a common misconception among some of her molecular biology students before they start doing research.

Many consider the material in their textbook to be definitive and unchanging.

“Sometimes they’ll think, ‘How can this not be known?’ ” said Kim, who is in her first year as an assistant professor of biology at Cal State San Marcos. “But I try to emphasize that it’s people like them who do the research and find the knowledge.”

Kim is quite familiar with the work that goes into such research. She just had an article titled “The role of break-induced replication in large-scale expansions of (CAG)n∙(CTG)n repeats” published in “Nature Structural & Molecular Biology,” a prominent peer-reviewed scientific journal.

The article is based on Kim’s work as a research assistant professor at Tufts University, research she will be continuing at CSUSM.

The work, co-authored by two undergraduate students who Kim mentored at Tufts, shows how the addition of DNA repeats can occur in human diseases.

Kim said Huntington’s disease and myotonic dystrophy are two examples of diseases caused by a short triplet sequence CAG increasing in length. She notes that everyone has short CAG repeats in various genes and it only has harmful consequences when these repeat lengths become too long.

“An important question is how these repeats get long or expand,” she said. “In particular, how do such large-scale expansions occur where dozens of repeats are being added in a single step? This has been a challenging question in the field of repeat expansion diseases.”

Kim’s article reports on an experimental system she designed to study these DNA repeats in budding yeast.

While using yeast for experiments may seem unusual to some outside the science community, Kim said it has been used for about a century as a genetic organism.

Budding yeast is just one example of a model organism that has been widely adopted for use by scientists. Drosophila fruit flies, which Kim worked with in graduate school, are another example of an organism scientists started working with 100-some years ago and is commonplace today.

“Budding yeast and Drosophila were among the first organisms to get their whole genome sequenced, even before humans got their genome sequenced,” said Kim, who already has two CSUSM undergrads lined up to help continue the research she started at Tufts.

Working with yeast has many advantages, according to Kim. It’s cost-effective, strains can be frozen for long-term storage and if something goes wrong with an experiment a researcher can often start over the very next day.

And, unlike the situation faced by a microbiologist who works with bacteria, Kim said it smells pleasantly like a bakery when you open the incubators during experiments involving yeast.

Kim is most interested in DNA repeats and their stability. She said yeast do things like replicate their genomes, partition the duplicated DNA during cell division, and make proteins. Those fundamental processes are highly conserved, Kim said, so it’s like a streamlined human cell; scientists can work much more quickly with yeast cells than human cells.

“You can introduce different DNA that you design and cut and paste certain things that you couldn’t do in human cells,” Kim said. “Yeast is a great system to ask questions such as, ‘How do the molecular processes like DNA replication or DNA repair influence these repeats?’ ”

Kim said her research is more basic, or about understanding the process, than applied.

“But at the same time,” she said, “a high-level goal is, if you understand how these repeats get too long then potentially in designing drug therapies or candidate drugs for diseases, maybe you could target these pathways for positive clinical outcomes. So, say you discover in yeast that a certain DNA repair pathway, or some molecular pathway, causes the repeats to have a higher tendency to get a lot larger or maybe it suppresses them from getting a lot larger, then it’s sort of a candidate pathway to investigate further in higher organisms.”

Kim worked for about four years on the project that led to the recently published article. She is proud not only of the work, but also that it was done with undergrads that she mentored who had no prior molecular biology research experience.

“I try to convey to students that doing research as an undergrad, your goal should be to gain experience in what it’s like to solve new problems in an actual research lab setting as opposed to verifying existing knowledge in a class setting,” Kim said. “This is the most important goal, but ending up on a scientific publication is certainly a cherry on top.”