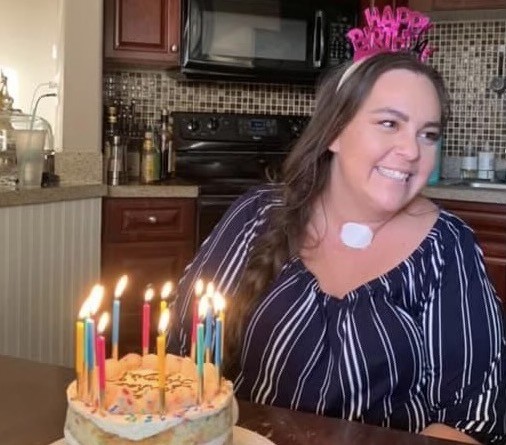 Alumna Elizabeth Castillo celebrated her birthday at home in February after spending six weeks in the hospital battling COVID.

Elizabeth Castillo’s battle with COVID-19 began gradually. San Diego County was enduring gusting Santa Ana winds in early December, and Castillo thought she might be having a reaction to weather conditions.

A few days later, she knew it wasn’t the weather.

“It just hit me like a ton of bricks,” Castillo said.

Confirmation came on Dec. 8 when Castillo and her husband, Andrew Hathaway, both tested positive for COVID. 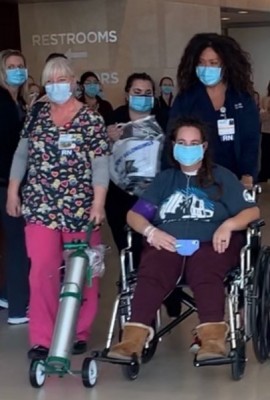 The test result began a harrowing two-month stretch in which Castillo was admitted to the hospital, intubated, underwent a tracheostomy and was left speculating about whether she would leave the hospital alive.

“I would have dreams all the time about dying and what would happen,” she said. “Just that fear of what's going to happen. You don't know what's happening and you literally can't do anything about it. You're just kind of surrendered to the whole thing.”

While many think of the elderly or immunocompromised when it comes to COVID hospitalizations and deaths, Castillo was healthy and just 26 years old, only three years removed from receiving her bachelor’s in business administration with an emphasis in operations and global supply chain management from Cal State San Marcos.

Less than a week after receiving her test result, Castillo was admitted to Palomar Medical Center Escondido on Dec. 14. She had been struggling with shortness of breath, but it wasn’t until she checked her oxygen saturation that she knew it was time to go to the hospital.

At her physician’s recommendation, Castillo had purchased a pulse oximeter to keep tabs on her oxygen saturation after her COVID diagnosis. A normal reading is in the 95-100% range, and the Centers for Disease Control and Prevention recommends beginning oxygen therapy on any COVID patient with an oxygen saturation level below 90%. Castillo was at 85%.

“I couldn't even walk from our apartment to the car,” she said. “I had to stop and take breaks.”

Castillo recorded a 106-degree fever at the emergency room, and hospital staff said there was no question she needed to be admitted.

After two weeks in regular care, Castillo’s symptoms worsened. Her heart rate was up and she was struggling to catch her breath. She was given medicine in an effort to control her heart rate and was put on high-flow oxygen and then a continuous positive airway pressure (CPAP) machine to assist with her breathing.

“Nothing was helping,” Castillo said. “They took me to ICU with the CPAP machine and, literally by the time they took me from one room to another, I heard the nurse say, ‘This isn't working. We need to intubate her.’ ”

Castillo remembers a nurse telling her that an anesthesiologist would be there shortly to perform the intubation, which involves inserting a tube in a patient’s throat to help them breathe. She doesn’t remember anything else about the intubation until she unexpectedly woke up shortly after the procedure, startling the person who was monitoring her. Doctors tried putting her in a medically induced coma, but Castillo continued to wake up and suffered hallucinations throughout her time in the ICU.

And it was a long stretch in the ICU – 24 days before she was deemed healthy enough to return to a regular room. She had no idea the calendar changed from 2020 to 2021, that there had been an attack on the U.S. Capitol on Jan. 6 or even that Joe Biden had been inaugurated as the 46th president.

Doctors anticipated moving Castillo to a long-term care facility about a week after she returned to a regular hospital room. But she was able to show that she could move well enough with the help of a walker that doctors agreed to let her return home on Jan. 29 – 46 days after she was first admitted. Palomar Health officials posted an emotional video on Instagram showing hospital staff applauding as Castillo was reunited with her mom.

The hospital discharge came just in time for Castillo to celebrate her 27th birthday at home with her husband and mother.

“We Zoomed with family because my mom was like, ‘Nobody is coming near you,’ ” Castillo said.

Castillo no longer needs the walker that was essential in the early days of her return home, but the effects of COVID are still readily apparent. She continues to require an oxygen tank and she said it could be months before doctors know if she has suffered long-term damage to any organs.

The near-death experience has made Castillo appreciate the little things more – “I realize that $5 cup of coffee that you're trying to skip to save your money, sometimes it's worth it,” she says – and she and Hathaway are planning to stop debating about traveling and do it once it’s deemed safe.

“There's a big shift in what we want to do with our lives and how to move forward from here,” said Castillo, who works as a project manager at a logistics company in Carlsbad.

Castillo is grateful for the health care professionals who got her through the ordeal. She knows how important it was for her to be able to FaceTime with family while she was in the hospital, and she and Hathaway are planning to donate iPads to Palomar Health so other patients have the same opportunity.

“In the beginning of the pandemic, everybody talked about the work of the health care people,” Castillo said. “But we still have to realize what they've done and what they’re continuing to do to make sure everybody is OK. All these people have worked very hard so people like me can come out on the good end.”