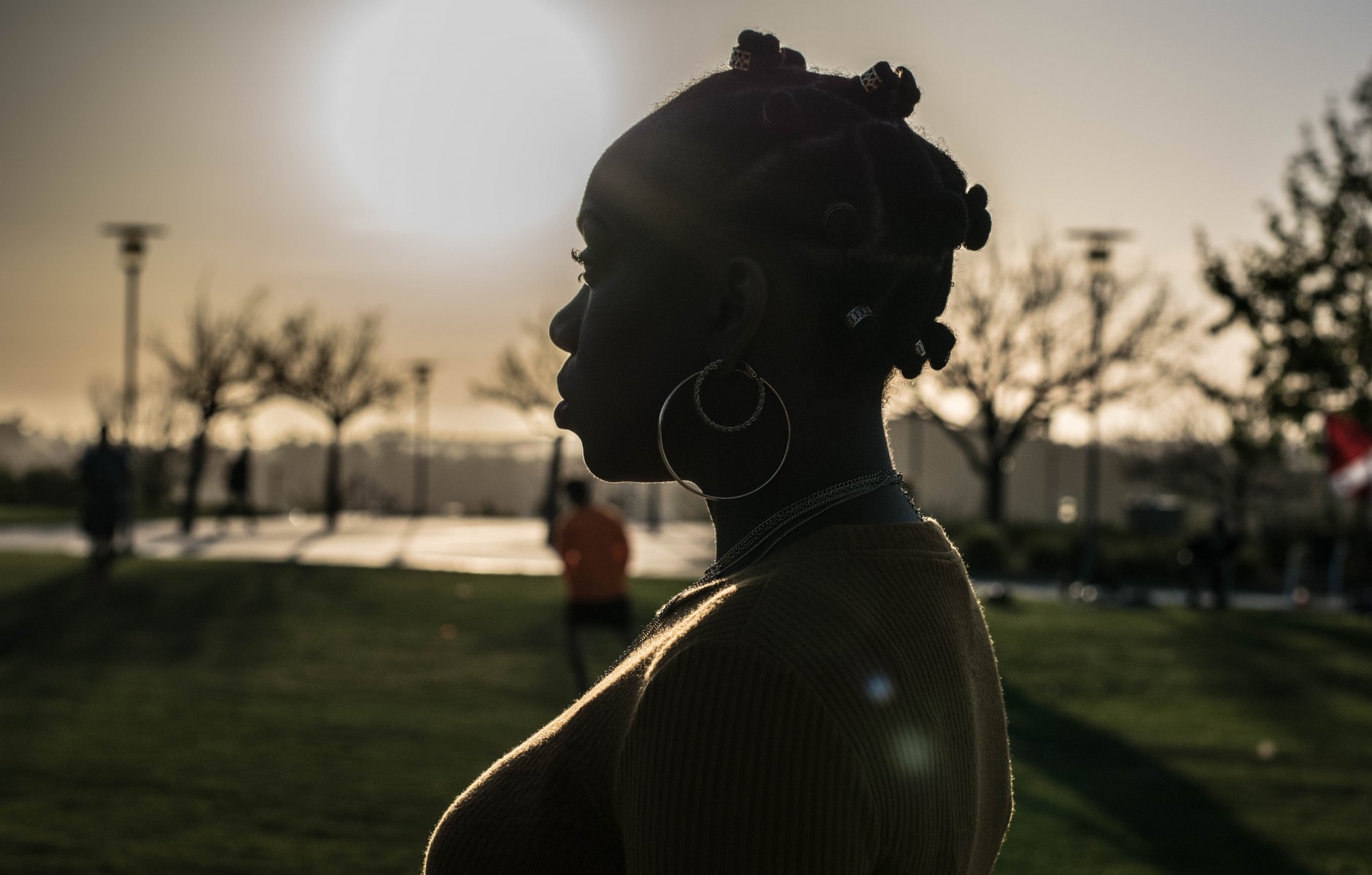 This photo of a Black student at CSUSM by alumnus Jake Northington is part of a virtual exhibit on display at the University Library.

In the fall of 2016, Cal State San Marcos student Jake Northington took a photography class for the first time as part of his pursuit of a degree in visual and performing arts.

For the final project, lecturer Nancy diBenedetto instructed students to create a photo book on a topic of their choosing. Many of his classmates, Northington remembers, opted to show off their newfound shutterbug skills around such themes as family or pets or hobbies.

“My book,” he said, “was completely different.”

As the inspiration for his photos, Northington picked a court case from that September in which the 11th Circuit Court of Appeals ruled against an Alabama woman who had sued a company that had denied her a job because she wouldn’t cut off her dreadlocks. The court determined that the move didn’t violate Title VII of the 1964 Civil Rights Act prohibiting race-based discrimination.

Northington decided to make a social statement with his project. He sought out Black women students across campus and shot pictures of them wearing their hair naturally, and proudly.

“It was about Black women and what they go through in the world as far as their hair being attached to their culture – that push to make them assimilate with their hair in a particular way,” Northington said.

Northington valued the experience and received positive feedback on the visual product. Though he had no intention of studying photography when he arrived at CSUSM, he found that he was good at it and he enjoyed it – particularly the ability to use the images to counteract deeply ingrained societal stereotypes about Black people.

This semester, the University Library is giving a platform to the art of Northington, who graduated from CSUSM in 2019. The virtual exhibit, titled “Chasing Andromeda,” displays his favorite photos from a collection that has swelled to three professionally produced photo books in addition to the ones from the class project that started the whole enterprise.

On Thursday from 6-7 p.m., the library will host a panel via Zoom featuring Northington, two of his School of Arts instructors (diBenedetto and professor Lucy Solomon), Black Student Center Director John Rawlins III, Marilyn McWilliams and Ariel Stevenson from the Office of Inclusive Excellence, and Sean Visintainer, the library’s head of special collections. Northington’s work will be shown in a slideshow while the panel discusses the photos as well as larger issues regarding art, photography and race in America and at CSUSM.

Anyone who joins the Zoom discussion can submit questions during the event that will be asked and answered at the end.

“In our programming this year, we’re really focusing on representation, and I think that this exhibit fully does that,” said Jennifer Fabbi, dean of the library. “It draws attention to members of our Black community on campus, especially students, and helps us to understand how we have been conditioned to see white as the default.

“Jake’s photography seeks to show a more holistic view of the Black members of our campus and put that in front of you, instead of some of the negative portrayals that we see on TV and in the media. The exhibit shines a spotlight on Black beauty and the Black experience on our campus, which is not something that we tend to focus on.”

All three of Northington’s photo books will be available for viewing in the library archives when the library re-opens. The first, “HUEMAN,” published in 2017, is his attempt to “re-image Black males on a college campus,” to depict them as regular students rather than how he felt he often was treated, as someone who didn’t belong. He recalls being the only Black person in his major and dealing with people moving out of the way as he strolled across campus.

For the book, he asked his subjects not to smile to achieve the rawest look possible. And as with all of his photos, he relied only on natural light to increase the sense of authenticity.

“The title refers to not being seen as human,” Northington said. “This is me in my rawest form, giving you my somber, melancholy look. I don’t need to smile. This is me; accept it. I’m human. But I spelled ‘human’ with a ‘hue’ because the people in the book identify themselves as many races and cultures.”

The second book, “Solar Amalgamations” (2018), turned his camera’s gaze toward Black women at CSUSM. This time, he found it easier to recruit fellow students as photo subjects because he had “HUEMAN” in hand to show them how the final product would look.

And Northington’s most recent book, “WE ARE,” published this spring, captures groups of Black students rather than individuals.

“I asked people just to naturally enjoy themselves – walking, hugging, talking, skateboarding,” he said. “I want that to feel supremely exciting. I want you to see these people loving each other and loving being college students.”

Northington intended for the three book titles to combine to form a larger message – “we are human solar amalgamations” or, as he translates it, “we are stars.” There’s a similar depth of thought behind the name “Chasing Andromeda,” the virtual exhibit that culls pictures from each of his books.

“Andromeda is supposedly a queen in Africa, and she was called that by the ancient Greeks. But in Africa, the word means something else; it’s like calling something beautiful,” Northington said. “And Andromeda is also the largest cluster of stars in the solar system. Then I came to notice that Andromeda is built like a DNA helix. It spirals and it coils, which I connected to my hair and the hair of black people. So I put all that together – chasing Andromeda is like looking for the beauty in Black people.”

Northington didn’t come to CSUSM to be a photographer, nor did he limit himself to the discipline after he started to gain some praise for his work. He contributed to “Data Stacks,” a library exhibit created by Solomon and Juliana Goodlaw-Morris, CSUSM’s sustainability director, featuring student art and data visualizations about campus sustainability. He designed a program for the annual All Peoples Luncheon. He produced logos and other promotional materials for several campus organizations, including the Black Student Center, Black Student Union and Project Rebound.

And even as an alumnus – he’s now a graduate student at Cal State Fullerton, pursuing a master’s degree in education, with a concentration in higher education – Northington continues to be involved in CSUSM’s campus culture. He was interviewed by Visintainer as part of the Black Student Center Oral History Project, a collaboration with the library that aims to record and preserve the narratives of people who were instrumental to the creation of the center in 2017.

“This is not a Black-and-white thing. It’s a person thing – how people treat each other, how students on campus treat each other,” Northington said. “A law can’t make you treat me better. If things are going to change, people need to work on changing them. We have to find different avenues for change, and some people march and protest. Other people take pictures.”