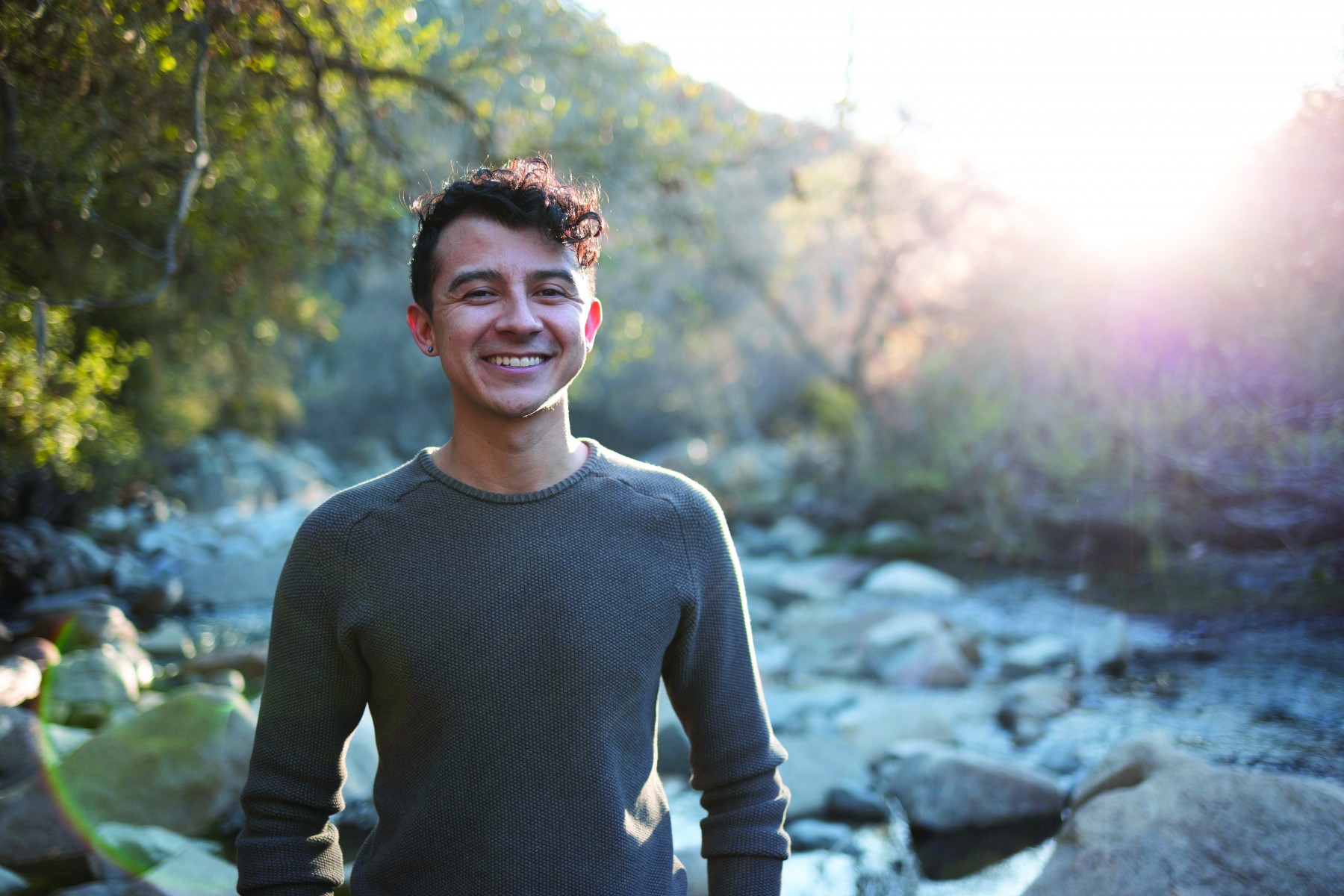 CSUSM alumnus Nathan Serrato is the founder of Queer Conscious, a wellness and life coaching business for the LGBTQ+ community. Photo by Andrew Reed

The way that Logan Davidson kept his demons at bay was by never stopping to consider them. He was the kind of person who lived his work and took pride in the constant thrum of action.

Then the pandemic happened, and the world slowed to a crawl. Living in his parents’ house in Denver, Davidson suddenly found himself alone with his thoughts and his inner struggles, trying to navigate life as a gay man in his mid-20s. He disentangled himself from a toxic relationship but was still wracked by so much anxiety that he couldn’t eat or sleep and was forced to abandon a rewarding job as an activist.

Davidson experimented with traditional therapy but felt like he was just spinning his wheels. One day in March 2021, he was browsing online in search of any solution to his mental state when he stumbled upon a Facebook post advertising a virtual event named the Queer Liberation Challenge. It had already started, but he joined anyway to see what it was all about.

It turned out to be a five-day webinar, with each day devoted to a different theme, from body image to masculinity to sexuality. Participants were asked to set goals, to meditate, to make entries in a journal. There was nothing revolutionary, but it was exactly what Davidson was looking for, and by the end of the week, he wanted more.

“I really liked that it was practical and dove right into the root of our relationship to ourselves and what we need to heal,” Davidson said. “Everything was incorporated into one, which was really nice compared to things like therapy, where I felt like I was talking about the same thing on repeat, but not really getting anywhere.”

The Queer Liberation Challenge was the brainchild of Nathan Serrato, and if Davidson derived great value from it, that’s partly because Serrato once was in Davidson’s shoes – bearing psychological scars from years of suppressing his sexual identity and then laboring to find genuine community beyond gay bars.

Four years ago, Serrato was a newly minted graduate of Cal State San Marcos, armed with a degree in communication and environmental studies, and working for the Escondido Creek Conservancy as its marketing manager. He enjoyed the job, but something was tugging at him. Maybe it was a calling to help people, going back to when he was a kid, listening to self-help radio shows with his mother. Maybe it was a desire to be his own boss, set his own schedule. Maybe it was frustration at the dearth of resources available to gay men like him grappling with emotional turmoil.

Or maybe it was the return of “Queer Eye for the Straight Guy” on Netflix.

“I remember crying and eating ice cream while watching it,” Serrato said. “I was like, ‘Wow, this is so powerful. They’re so inspiring, we need more of this. Why can’t I do this?’ ”

He could, as it turns out. Serrato, 30, started a company called Queer Conscious that began humbly as a meet-up group for the LGBTQ community (the first gathering was, of all things, gay goat yoga and attracted 11 people) and has evolved into a wellness and life coaching venture with dozens of clients from around the world. Along the way, Serrato attained three certifications from the International Coaching Federation and also became certified in Time Line Therapy, a concept laid out in a 1988 book that involves unconscious mining of the root causes of trauma.

“There’s a need in the gay community for sober spaces, spaces for LGBTQ people that are outside of the gay bars, outside of the dating apps,” he said. “Not only do we create the environment for people to create authentic connections, but also for them to really look inside of themselves and heal any of the societal or cultural shame that is still present within them.”

For the first couple of years, Queer Conscious was a business in the loosest sense of the word. In addition to the goat yoga (Serrato also is a certified yoga instructor), Serrato and his newfound friends would gather for regular hikes, arts-and-crafts sessions and other activities. 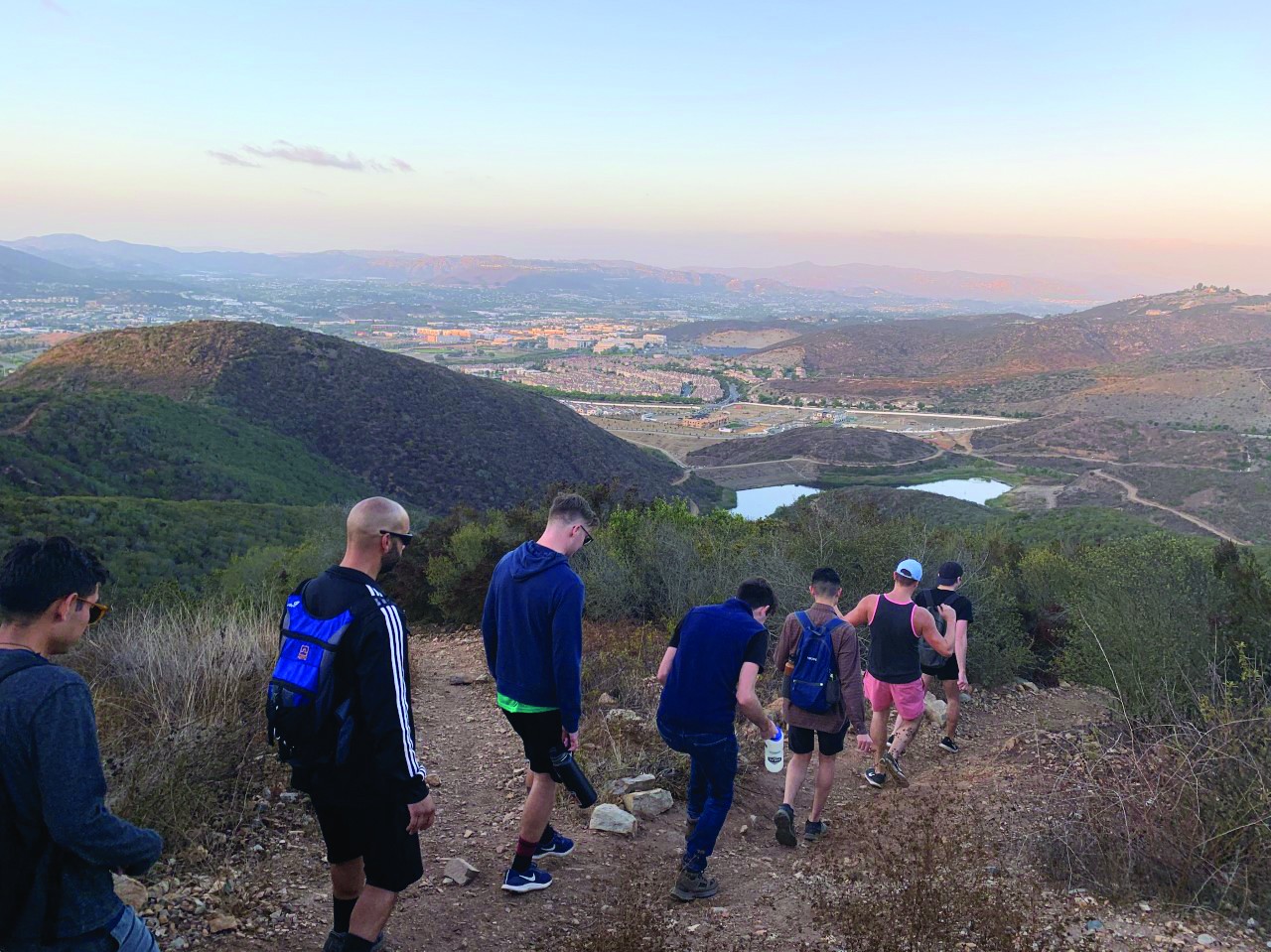 The early years of Queer Conscious consisted mainly of Nathan Serrato and his friends meeting for outings such as hikes.

The pandemic, though, provided the impetus he needed to reimagine and expand the enterprise. Taking advantage of the COVID reality of people being cooped up in their homes, he launched the five-day virtual events like the one that first drew in Davidson, holding them every three months. For only $37, participants get the morning seminars on a set topic as well as three one-on-one calls with Serrato where they can apply the lessons to their own specific challenges.

If they like what they hear, they can continue with private coaching that ranges from $500 to $3,000 depending on the service. One of them is what Serrato has labeled a “breakthrough,” a 12-hour, intensive experience focused on the release of trauma. Davidson is in the midst of his second breakthrough, this one dealing with relationships and intimacy.

“It’s hard to explain, and I even struggle sometimes to explain to my friends what has happened,” Davidson said. “But I can remember multiple moments during these sessions when I could literally feel tightness or restriction or some sort of weight physically leaving my body, and anxiety leaving me that I didn’t even know I’d been holding on to for years. I’ve let go of a lot of unnecessary baggage and have gained much more of an ability to navigate relationships, hold boundaries, stand up for myself and trust myself.

“People in my life come up to me and tell me that I look happier and healthier than ever before. I’m like, ‘All right, thank you.’ ”

Much of the damage that Serrato had to overcome was religious in nature. He grew up in Escondido as the son of Mexican immigrants who were staunch Catholics. He attended a Catholic school until second grade, then through eighth grade went to a school affiliated with the Lutheran denomination, which Serrato calls “Catholic light – still heavy on the guilting and shaming, just not as much of the rosary and ceremonial stuff.”

He describes being indoctrinated in the belief that it was a sin to be who he was and that he would be punished for it for eternity.

“I would go to my therapist and be like, ‘I think I’m going to hell. Can you help me?’ ” Serrato said. “And they wouldn’t know what to say to me. They were just like, ‘Well, that sucks.’ ”

Bedeviled by thoughts of damnation, he sought escape through alcohol and drugs in his late teens and early 20s. Then he entered his first serious relationship, determined to show his parents that being gay was normal. But the trauma wouldn’t relent.

“I would wake up from night terrors in the middle of the night and turn over to my boyfriend and be like, ‘I can’t do this. I have to be straight. I might need to marry a woman,’ ” he said. “I couldn’t control those nightmares. It took me forever to get over them.”

Serrato finally chased them away through his coaching training, which in turn gave him confidence that he could help other people beset by similar issues. He used to feel anger toward his parents for exposing him to Catholicism and making him feel guilty about his sexuality, but now he says they’re more accepting and supportive than ever. And he’s open to exploring forms of religion that he believes are based on love and kindness instead of indoctrination.

Serrato has grand ambitions for Queer Conscious and his work on behalf of the LGBTQ community. He aspires to write a book, to host weekend retreats where his clients can congregate in person and feel like they’re essential, not just a gay accessory. And he wants to expand into countries where being gay isn’t a source of shame but a potential death sentence.

“I’d like to see Queer Conscious really become the place where people look to when they don’t know how to be gay,” Serrato said. “How do I confront spirituality? How do I confront relationships? How do I overcome my family dynamics? How do I deal with homophobia in the workplace? I’d love for it to be everything that a queer person needs, all the tools and resources for them to retain their authenticity in our society.”