Scott MacDonald remembers what it was like trying to pay for college.

Money was tight when MacDonald was being raised by a single mother in Illinois, so he paid for his education through a combination of earnings from a factory job and financial aid, which included a student loan.

Following a long and successful business career, MacDonald wanted to give back to others trying to pay for college.

“My career would not have been possible without a quality college education, and I have the resources now to help others begin their journey,” said MacDonald, who has four decades of experience working and managing commercial real estate companies. 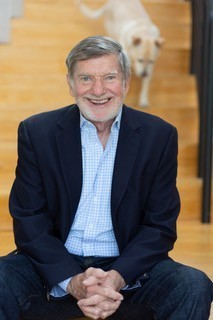 MacDonald is giving back in many ways. He authored the recently released book “Education Without Debt: Giving Back and Paying It Forward,” which was published by Indiana University Press and includes examples of Cal State San Marcos’ commitment to community service and the success of its students in overcoming adversity. The book includes chapters on CSUSM alumna Riley Bender, who went from homelessness to graduation, and alumnus Martín Leyva, who spent nearly two decades in and out of jail and prison before focusing on his degree and is now CSUSM’s Project Rebound coordinator.

“Education Without Debt” examines the cost of higher education and the explosion of student debt in the United States while weaving in personal stories of those buried in debt as well as those who overcame significant challenges to graduate. It also lays out a path to address the excessive level of student debt in society and assure a college education regardless of family income or circumstances.

“I really hope that people will read my book and support scholarships at universities across the United States,” MacDonald said. “When they understand why college costs so much, the need for students to take on the burden of debt if they want to graduate, and the potentially debilitating effects of excessive debt, maybe those who have been successful and have the resources will contribute so others can have the opportunity they were able to access.”

MacDonald is doing just that through his MacDonald Scholars programs, which he has established at five universities. There are about 100 students under scholarship through the program, including community scholars funded by other donors. CSUSM will become the sixth university with the launch of the MacDonald Scholars Service Learning Ambassadors at CSUSM, which is a partnership between the department of Service Learning & Civic Engagement and the Alliance to Accelerate Excellence in Education.

MacDonald Scholars Service Learning Ambassador scholarships will be awarded to two undergraduate first- or second-year students who demonstrate financial need. Each award will be renewable for four years of undergraduate study, provided students maintain eligibility by meeting the scholarship criteria each academic year.

“I believe in ‘paying it forward,’ ” MacDonald said. “My scholarships require recipients to undertake community service projects to help others in need. I meet with my students each year, and they have all shared their experiences in school and the personal reward and satisfaction that comes from helping others. There is hope where there is opportunity.”

Learn more about “Education Without Debt: Giving Back and Paying It Forward” and other books by Scott MacDonald through his website.