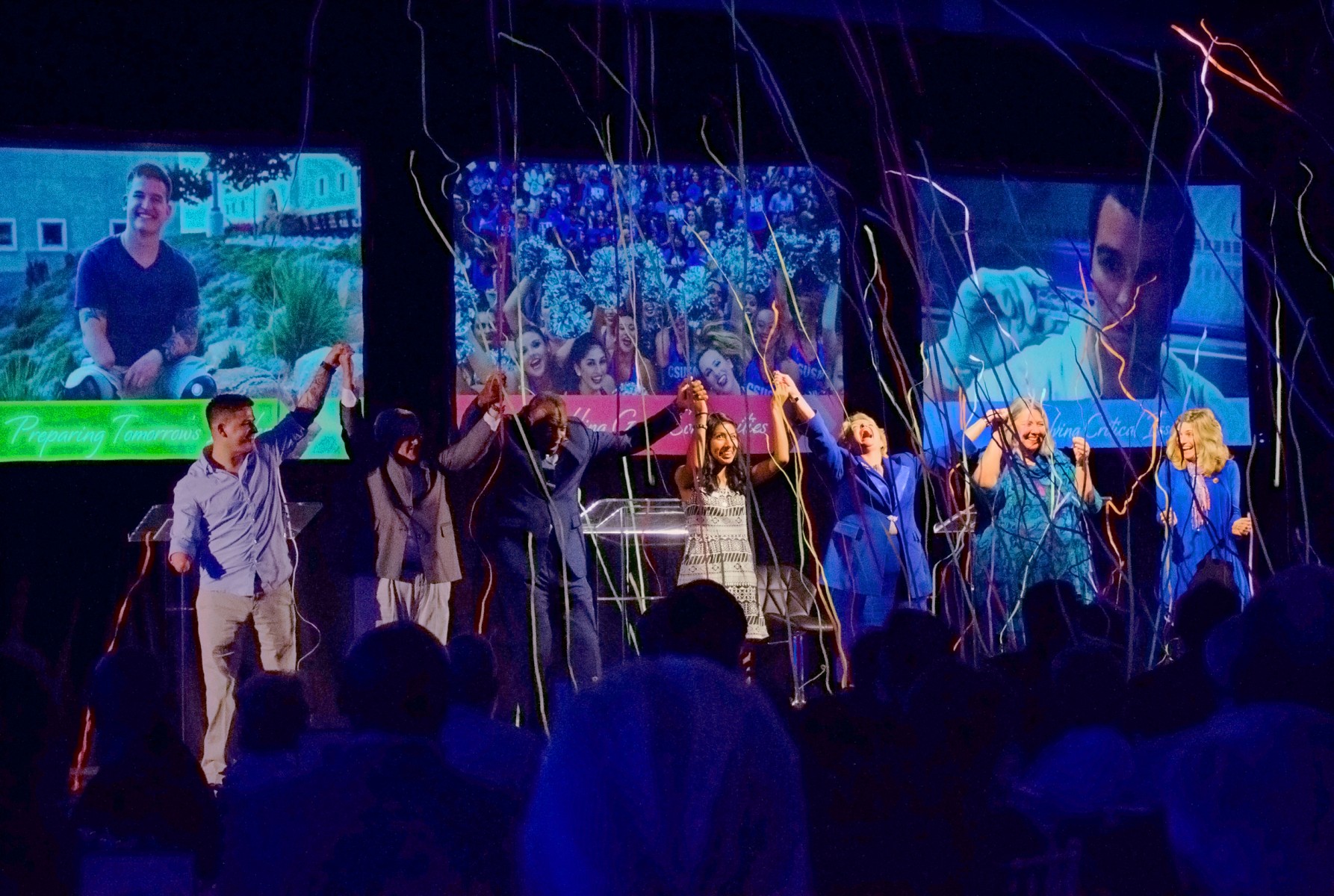 “Donor support is already making a real difference at our University,” said President Karen Haynes. “Today, it’s time to take our efforts to the next level through our first major philanthropic campaign. No other university in the CSU system, and likely in the nation, has attempted a comprehensive fund raising campaign at our age. Our goal is audaciously bold, but it befits our audaciously bold aspirations.”

Since CSUSM began the campaign’s quiet phase to prioritize needs and establish fund raising goals, donors have contributed more than $26 million—bringing the campaign nearly halfway to its goal.

Regional philanthropist Darlene Shiley provided the lead gift to Forward Together with a donation of $3 million, supporting the CSU Institute for Palliative Care, launched at Cal State San Marcos in 2012.

“I’m a proud Cal State San Marcos donor,” Shiley remarked at the campaign launch event. “It is three years to the day that we launched the Institute for Palliative Care. And whether it’s through the Institute or through the work of the professors here, all working side-by-side in matters related to everything from health, education, economics, the environment, the arts, sciences, business…this university is advancing innovation in great areas that we need to be looking at.”

Forward Together is designed to build upon the University’s 25-year history of serving the region of Northern San Diego, Southwest Riverside and South Orange Counties. The theme is a tribute to the groundswell of partnerships and community support that initially advocated for the university and has continued to sustain and grow it over the years.

“Like our University, this campaign will succeed because of the collective contributions of countless individuals,” said Haynes. “It starts here and it starts now. Working together, we are capable of incredible things.”

Jack Raymond, chair of the CSUSM Foundation Board and a leading community supporter since the University’s inception said, “What we have achieved since opening our doors 25 years ago has been truly remarkable—but we can’t stop here. The need within our region is extensive and the demand on our University is great. Undertaken at this pivotal moment in our institutional and regional history, our campaign is not just inevitable, it’s imperative. We must succeed—and we will succeed!”

The campaign is focused on enhancing CSUSM’s strengths by:

The highest campaign priority, with a total fundraising goal of $25 million, addresses the need to prepare students to become tomorrow’s leaders through scholarships, working scholarships and graduate fellows as well as through the support of CSUSM’s one-of-a-kind programs for former foster youth, veterans and other at-risk populations.

Another $5 million will go toward initiatives that build great communities through The Alliance to Accelerate Excellence in Education and K-12 outreach, athletics, on-campus artistic and cultural performances, and enhanced university art venues, rehearsal spaces and laboratories.

The campaigns goals also include $20 million for solving critical issues through innovative academic programs, cutting-edge research and faculty development as well as via the CSU Institute for Palliative Care at Cal State San Marcos.

Since the quiet phase of the campaign began in January 2012, hundreds of donors have made gifts of every size to the campus. Notable donations include:

CSUSM will update supporters on campaign goals and progress through its newly launched campaign website: www.csusm.edu/forwardtogether.