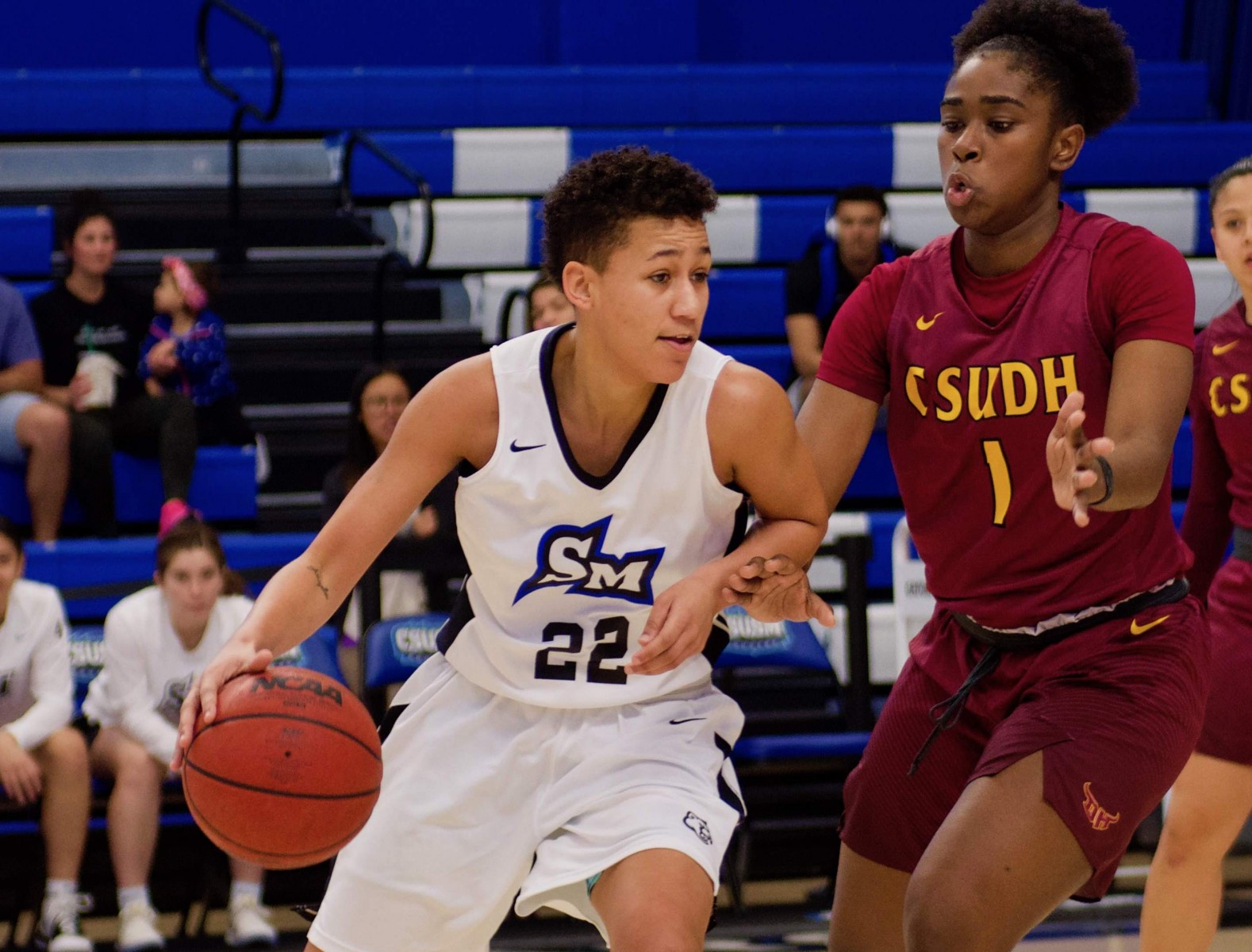 Chloe Eackles averaged 4.4 points and 3.3 rebounds per game during her senior season.

It seemed to happen a few times every week during Chloe Eackles’ four years as a member of the Cal State San Marcos women’s basketball team. Coach Renee Jimenez would inadvertently refer to Eackles as Quinn, the name of Jimenez’s daughter.

“That has to show just how much she means to me,” Jimenez said.

Jimenez has more than a decade of experience as a head coach, so she is accustomed to players moving on once they’ve exhausted their eligibility. But seeing Eackles and fellow seniors Stephanie Custodio and Jon’Nae Vermillion finish their playing careers last month was more difficult than usual.

Not because CSUSM lost a game on the court, but because the COVID-19 pandemic led to a premature end to the season.

“I feel terrible for all of the players because of how hard they worked and what an incredible season they had, but especially sad for our seniors,” Jimenez said. “All the rest of us get to come back and try again, but the seniors are just done. I hope we get the opportunity to celebrate their success and all they have meant to our program.”

Eackles is back home in Sunnyvale, near San Jose, sheltering in place with her family while continuing her studies through virtual instruction. A biological sciences major, Eackles will graduate in the fall and plans to pursue a career as a veterinarian.

Eackles is keeping in touch with her teammates during this challenging time, and the abrupt end to the season remains a topic of discussion.

The Cougars were enjoying the best season in program history when the postseason was canceled. Their long list of accomplishments included the most wins in program history (25), longest winning streak (11 games) and first California Collegiate Athletic Association conference title. Their efforts led to another program first – a spot in the NCAA Division II Tournament.

The Cougars flew to Hawaii on March 11 to prepare for their tournament debut. As they exited the plane, their phones started blowing up with social media updates, texts and news alerts. Rudy Gobert, a player for the NBA’s Utah Jazz, had tested positive for coronavirus. Then came news that the NBA was suspending play across the league.

“Coach talked to us and she said, ‘As of right now, only family members can come to the games, but we're still going to be playing,’ ” Eackles said. “So we kind of felt relief. She told us that right when we landed, so we thought, ‘OK, hopefully we can just get to Friday and we'll be able to play because we're already here.’ ”

By the next morning, everything had changed. Eackles and her teammates received a text from Jimenez alerting them to an unplanned team meeting. It was there that players learned that the tournament was being canceled and they had to return home.

“You could tell she was upset and our assistant coaches were upset,” Eackles said. “It was just really sad.”

It was a disheartening finish to a historic run.

Eackles recalled Jimenez’s words from the beginning of the season, when she told them they were good enough to win the conference. It didn’t take long for the players to buy in. During the season’s first month, on Nov. 21, the Cougars stunned UC San Diego, then ranked No. 6 in Division II. The victory was both their first against UCSD and their first against a ranked opponent as an NCAA member.

But the most memorable moment of Eackles’ basketball career came three months later in the regular-season finale, when CSUSM beat UCSD again, this time on the Cougars’ Senior Day, to clinch a share of the CCAA regular-season title and the No. 1 seed in the CCAA Tournament.

“Chloe has had an incredible career here at CSUSM,” Jimenez said. “She came to us before we had won a single Division II game, and now she is part of a nationally competitive program. It hasn't always been easy during this building process for Chloe, but she has stayed the course, trusted the process and has always had a smile on her face. No matter the position or role she has been asked to play, she has always put the team before herself, and that is what her coaches and teammates will remember most about her.

“I hope our younger players have learned a lot from her and will play as hard as Chloe does and always remember to put the team first. She is leaving one special legacy.”

While the Cougars didn’t get to fully reap the rewards of winning the conference and earning a spot in the NCAA Tournament, Eackles is excited for what their success means for the future of the program.