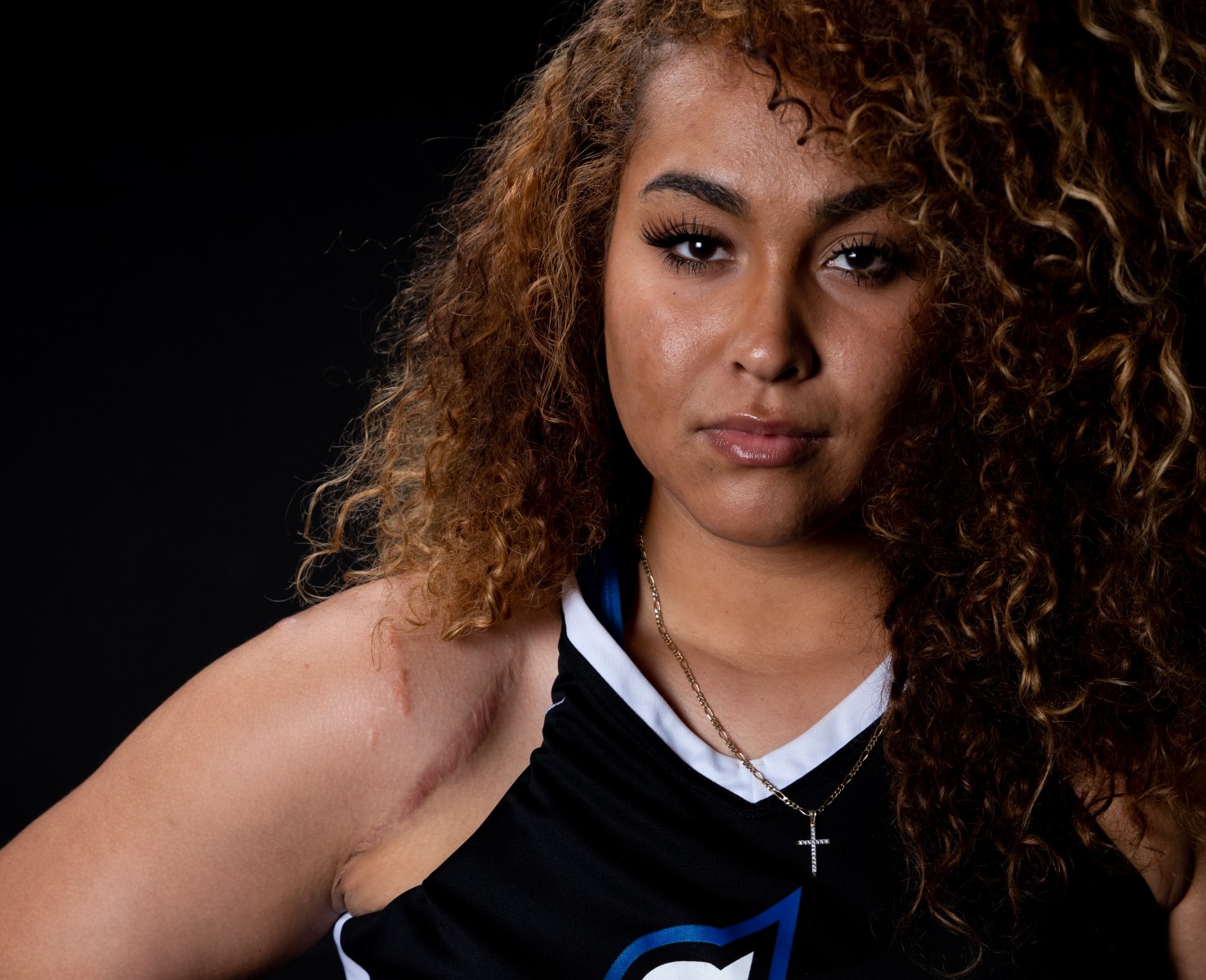 Jon’Nae Vermillion finds a quiet spot before every Cal State San Marcos women’s basketball game and listens to “Something About the Name Jesus,” a song her mother played for her when she was a child.

The music allays the concerns about her right shoulder. It’s easy to understand her unease. After undergoing surgery on the shoulder three times, Jon’Nae continues to play in pain. She knows another injury likely would mean a premature end to her basketball career. But beyond basketball, other thoughts about the potential impact of further damage creep into her mind. From mundane tasks – will she be able to put her hair in a bun? – to the melancholy – when she has children, will she be able to hold them?

Jon’Nae takes a moment to let those thoughts swirl before the music helps calm her. Though the scars from her surgeries are a constant reminder, she’s able to erase all thoughts of reinjuring the shoulder.

“If you’re on the court thinking, ‘What if I get hurt?’ you’re going to get hurt,” Jon’Nae said. “I just play how I need to play. At the end of the day, whatever happens, that’s supposed to happen.

“I’m a tough kid. I can get through whatever’s thrown at me.”

Injuries are part of basketball, but the likelihood might be greater for someone who plays like Jon’Nae. Her game isn’t about guile or finesse. It’s about being physical. Shy away from contact? Jon’Nae welcomes it. She even refers to her style of play as “bully ball.”

“She makes a difference,” said Renee Jimenez, CSUSM’s head women’s basketball coach. “You notice her when you walk into the gym.”

Jimenez first noticed when Jon’Nae was in high school. Jimenez was the head coach at Cal State San Bernardino when she recruited Jon’Nae out of Santiago High School in Corona in 2014. Jon’Nae committed to play for Jimenez right before undergoing her first shoulder surgery. She injured it in the first game of her senior season when an opponent pulled her arm back as she was jumping for a rebound. Jon’Nae thought it might be a dislocation and continued to play. It was only when the pain became too much to bear that she visited a doctor and learned it would require surgery.

Jon’Nae sat out her first season at Cal State San Bernardino as a redshirt, which allows college athletes to extend their eligibility an extra season by not competing in games. Jon’Nae was just 17 when she entered college, so redshirting had the dual benefit of providing additional time to heal while she adjusted to the rigors of higher education.

But the transition to college proved challenging, particularly when it came to taking direction from Jimenez.

Despite the rocky start to their relationship, there was always mutual respect, which made it that much more difficult for Jon’Nae when she learned after the season that Jimenez had accepted the head coach position at CSUSM. Jon’Nae’s first instinct was to follow Jimenez south, but the coach recommended a different path. 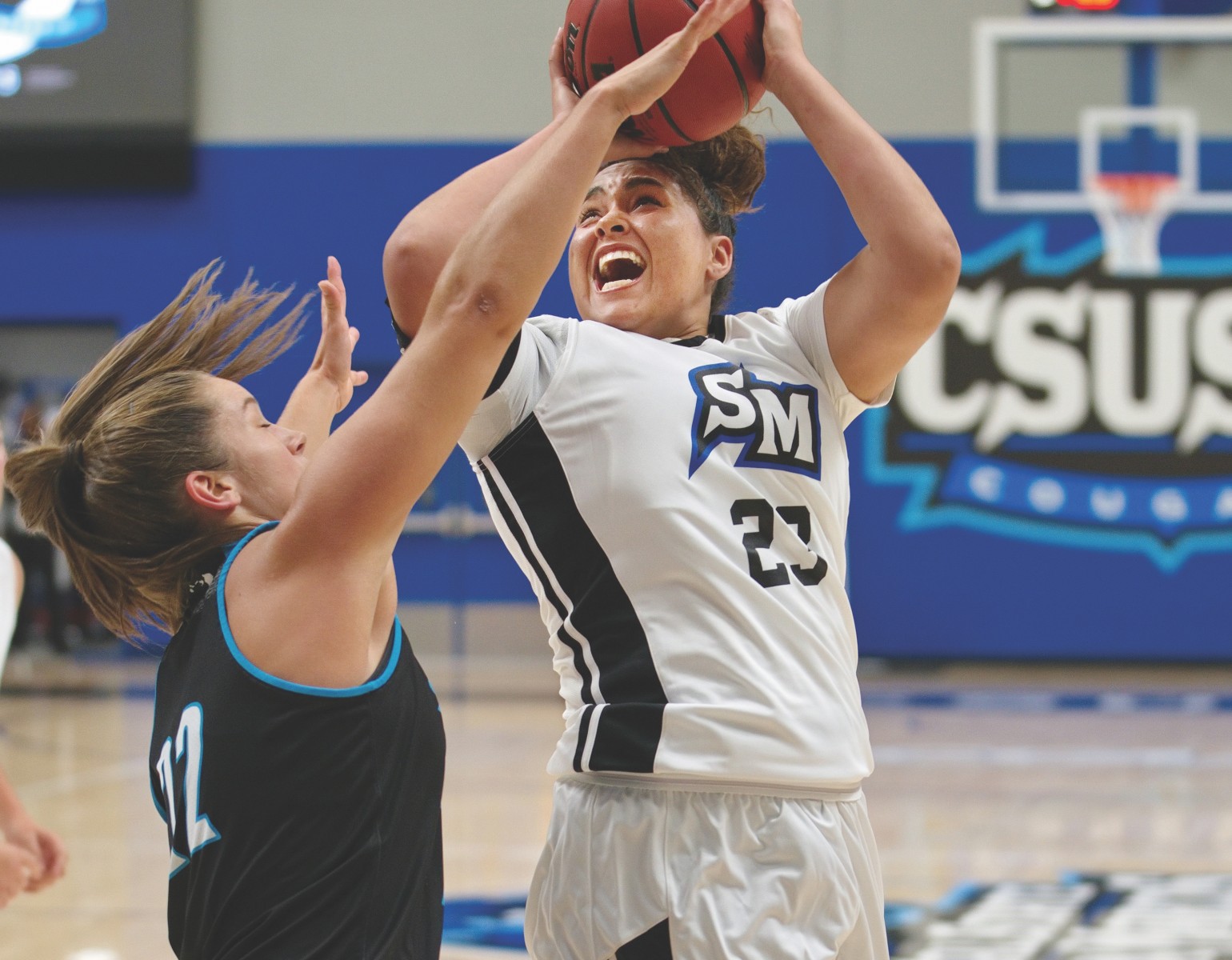 CSUSM was in the middle of transitioning from NAIA to NCAA Division II, which meant the university wasn’t eligible for postseason play. Jimenez thought Jon’Nae was too good to pass up an opportunity to play for the postseason somewhere else.

Jon’Nae decided to attend Mt. San Antonio College, not far from where she grew up in Corona.

“That was probably the best decision I could have made for myself,” she said. “I grew up.”

Jon’Nae helped Mt. SAC win the California Community College Athletic Association women's state championship in her first season, collecting a long list of accolades along the way, including being named the state championship most valuable player. And she did it all while playing the second half of the season with an injured right shoulder that would again require surgery.

Jon’Nae injured the shoulder when she was fouled while going up for a layup in a January 2016 game. She fell to the court and knew right away something was wrong. But she got up, shot her free throws and played in the team’s final 10 games before an MRI after the season showed that she had torn nearly every ligament and suffered 40% bone loss in the socket.

Two months after winning the state title, Jon’Nae underwent her second surgery. She had six screws inserted into her shoulder (on top of the six from the first surgery). Doctors took part of her bicep and a portion of bone from her back to rebuild the shoulder.

But when Jon’Nae was finally cleared to start running again, she knew something wasn’t right. A trip to the doctor confirmed her fear – she had torn the ligaments again and needed a third surgery. The diagnosis came with a warning that she might not be able to play basketball again.

“It was hard because I was always Jon’Nae the basketball player,” she said. “In my head I thought, ‘Well, it’s over. I’m going to get surgery and then I have to move on with my life.’

“I went through this stage of depression. It was really hard.”

To the surprise of everyone, including her doctor, Jon’Nae saw positive results almost immediately following the surgery. She missed the 2016-17 basketball season while she recovered, but returned to Mt. SAC the following season and exhibited the same dominance to which teammates and foes alike had become accustomed.

While Jon’Nae and Jimenez didn’t always see eye-to-eye at Cal State San Bernardino, they remained in touch in the ensuing years. When it came time for Jon’Nae to transfer to a four-year school, she wanted to play for Jimenez.

“We grew up a lot together,” Jimenez said. “I was young when I coached her at San Bernardino. I was still trying to figure it out. I think she would tell you I’m a lot more relaxed now than when I was first coaching her. And she’s a lot more mature now than she was when she was 17.

“But I think San Marcos has really helped her grow up a lot and really pay attention to her academics and understand the importance of graduating. Before, it was all basketball. Now she’s understanding how to be a leader.” 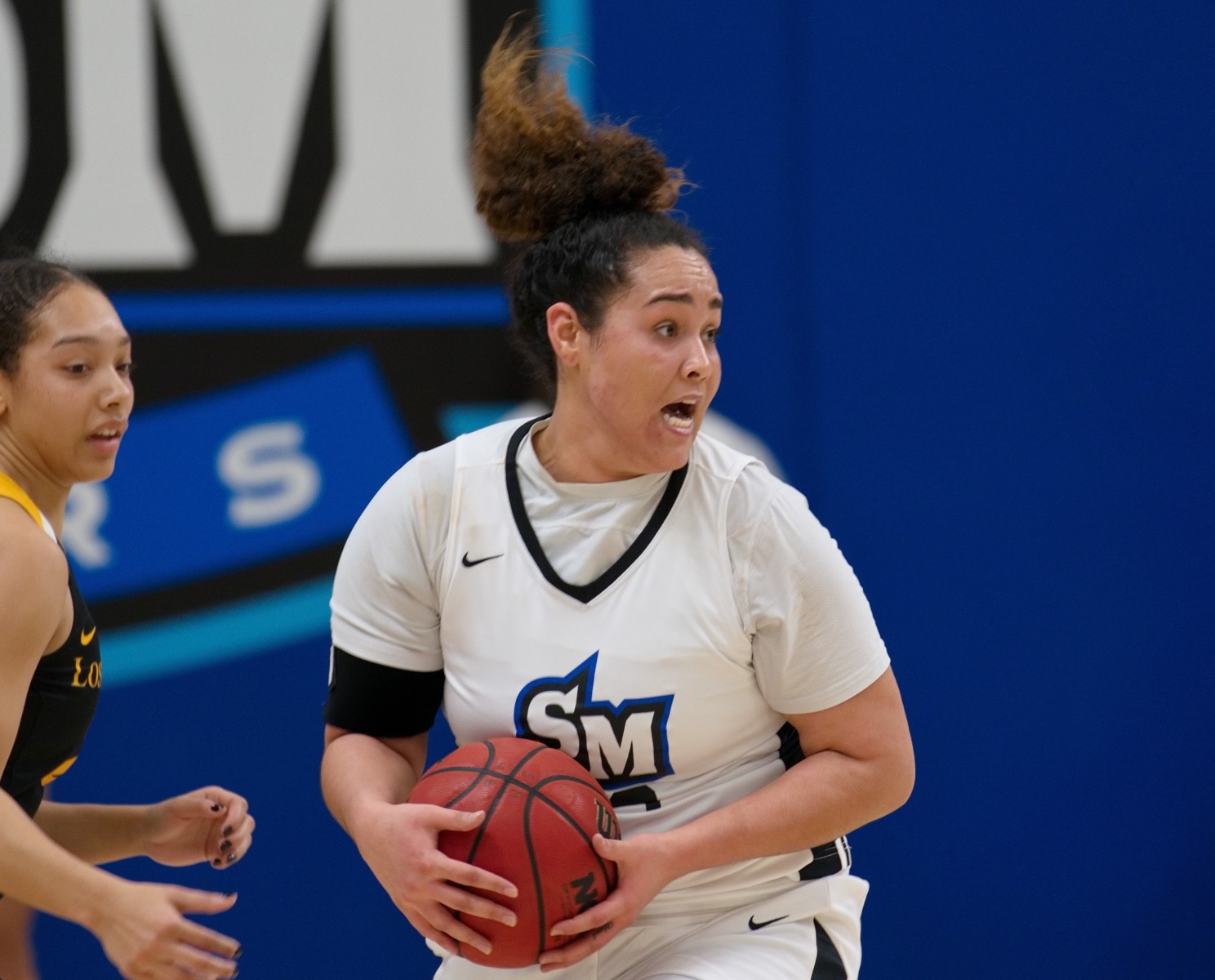 As she approaches graduation next May, Jon’Nae is still working to grow as a leader. At Mt. SAC, if she was unhappy with a teammate’s effort in a game or practice, she made it abundantly clear. And she was used to her Mt. SAC teammates doing the same. At CSUSM, she joined a young squad of players who weren’t accustomed to such blunt criticism.

Dynnah Buckner was on the receiving end of Jon’Nae’s candid critiques more than once as a freshman last season. Early in the season, Dynnah often stopped by Jimenez’s office to ask why Jon’Nae was constantly yelling at her on the court. While Jimenez typically agreed with the message Jon’Nae was delivering, she encouraged her to provide it in a more constructive manner. And she emphasized to Dynnah that Jon’Nae’s criticism came from a desire to help Dynnah improve.

“At the end of the day, it’s all love,” Jon’Nae said. “When I'm on the court and I say something to you, you can’t take it personally. I'm not going to think twice about what I'm saying and how I'm saying it to you, because what I'm saying to you is the truth. No matter how I say it, it’s the truth. So you need to take it. And then if you want to have a conversation later, then we can do that, too, after the game – after we win.”

A turning point came when Dynnah took Jon’Nae up on that willingness to have a conversation. She asked if they could meet to talk things through. The next day, Jon’Nae invited Dynnah to join her on a trip to Los Angeles to see one of Jon’Nae’s friends play basketball for Cal State L.A.

“That's when she really explained why she was on me the way she was,” Dynnah said.

Jon’Nae said she was critical because she knew how great Dynnah could be and how important Dynnah was to the team’s success. She wanted Dynnah to stop worrying about making mistakes and simply play the game to the best of her abilities. And, perhaps most importantly, Jon’Nae finished by telling Dynnah that she always has her back.

“Her intentions were never bad,” Dynnah said. “At first, I sort of took it that way because it was the first time somebody really just came at me in a blunt way saying, ‘You need to get this together. You need to pick it up.’ But it was all out of love and wanting me to do better.”

On the court, it all comes down to winning for Jon’Nae. It doesn’t matter if it’s cross-town rival UC San Diego or a pick-up game at 24-Hour Fitness. Jon’Nae expects to win.

And she has high expectations for the Cougars this season. The team finished 18-10 a year ago, winning its first California Collegiate Athletic Association tournament game before ending the season with a loss to UCSD in the semifinals.

Jon’Nae wants to help CSUSM take that next step and reach the NCAA tournament. She worked throughout the summer to strengthen the shoulder and anticipates shedding the brace she has worn since her time at Mt. SAC, giving her more mobility on the court. She knows the shoulder won’t be 100 percent, and Jimenez plans to limit Jon’Nae’s practice time as the season progresses to help her stay healthy.

But Jon’Nae is used to playing in pain. She no longer has full range of motion and has accepted that she likely never will. The scars on her shoulder may serve as a constant reminder of what she has been through, but they no longer carry a negative connotation.

“I used to look at my scars and I used to be disgusted,” she said. “But now I’m proud of it. Scars tell the story of survival.”