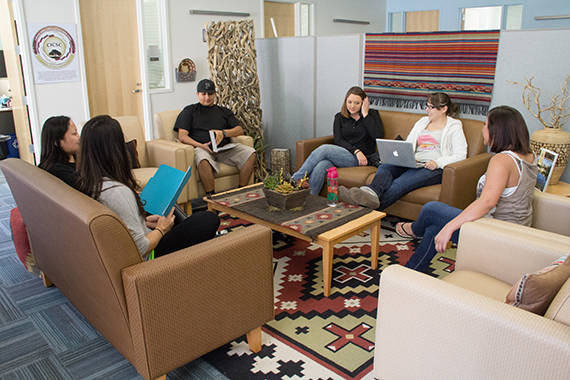 Despite promising practices aimed at attracting, retaining and graduating American Indian and Alaska Natives (AI/AN) at community colleges and public universities in California, a shockingly low number of AI/AN students—just 1 out of 4—actually graduate from high school prepared for the rigors of college academics.

Made possible through a generous $500,000 gift by the San Manuel Band of Mission Indians, the report compiles publicly available data to provide much-needed information about AI/ANs in the K-12, California State University and University of California systems. The data includes: enrollment and graduation rates, dropout rates, number of degrees conferred and number of personnel by race/ethnicity. The information contained in the report is particularly valuable given that California has the largest AI/AN population of any other state in the U.S. and, historically, AI/AN students drop out of high school at higher rates than their peers.

“The second year report shines a brighter light on where and when the decline in AI/AN enrollment is occurring, specifically within the California State University (CSU) and University of California (UC) systems,” wrote State Superintendent of Public Instruction Tom Torlakson in the report’s introduction.

The report confirmed the need for greater efforts to prepare K-12 students for high school graduation and entry into college.

“American Indian and Alaska Native high school students are graduating at rates six percent below the state average for other ethnic groups,” said co-author of the report, CICSC Director Joely Proudfit. “Even more troubling is the statistic that less than 25 percent of AI/AN high school graduates meet CSU/UC requirements for college admission.”

In fact the report shows that only 24.9 percent of AI/AN students are prepared to enter California’s four-year public university systems versus the state average of 38.3 percent.

Furthermore, at 18.5 percent the AI/AN dropout rate for 2011-12 remains higher than all other ethnic/racial groups in California except for Hispanics/Latinos, despite the fact that AI/ANs comprise only 1.9 percent of state demographics and Hispanics/Latinos comprise 37 percent of the state’s population.

Among the findings outlined in the report is the startling realization that the numbers of AI/AN students at community colleges and CSUs are declining despite the fact that enrollments at UCs are increasing. The enrollment rates from fall 2011 to fall 2012 at community colleges show a decline of 16 percent while the enrollment rate during the same time period at CSUs declined 61 percent. Meanwhile, the UC system saw an increase of 67 percent in AI/AN students enrolled from fall 2011 to fall 2012.

“The steady decline in the overall annual enrollment rate of AI/AN students in the CSU seems to indicate that we are admitting more students but they are dropping out—we are not retaining them once they get here,” said Proudfit.

Despite these troubling statistics, the report profiles institutions of higher learning which are involved in providing community outreach, student support and academic resources to assist AI/AN students achieve their post-secondary education.

Cal State San Marcos has an institutional commitment to American Indian education. Its record of tribal community engagement includes the implementation of a Tribal Initiative through which the University is exponentially increasing its recruitment, retention and graduation of American Indian students.

In 2004, the University hired a full-time tribal liaison, which remains the only position of its kind in the California State University system. That same year President Karen Haynes established the University’s Native Advisory Council, comprised of representatives from most neighboring tribes and tribal education leaders. In 2011, the University opened the CICSC which, in addition to conducting important research, hosts community events such as the annual San Diego American Indian Film Festival, which allows prospective and current students to share their experiences with the community.

In addition the University has a MOU with the Iipay Nation of Santa Ysabel (also known as the Santa Ysabel Band of Diegueno Indians), guaranteeing admission to all high school graduates who meet minimum CSU admission requirements. Cal State San Marcos also provides annual tribal-University events like the Tribal Education Summit and the President’s Report to Tribal Nations.

“We are proud of the relationships that we have nurtured with our tribal partners who are fully engaged in working with us to ensure our regional American Indian students are receiving the support they need to be successful in today’s 21st century world,” said Proudfit. “We have seen firsthand the transformational impact of our strategies and we are passionate about continuing this important work to raise the educational attainment rate of our Native students.”

In 2012, CSUSM graduated 24 American Indian students with bachelors and masters degrees. The promising practices and relationships are ensuring that these numbers will continue to grow.