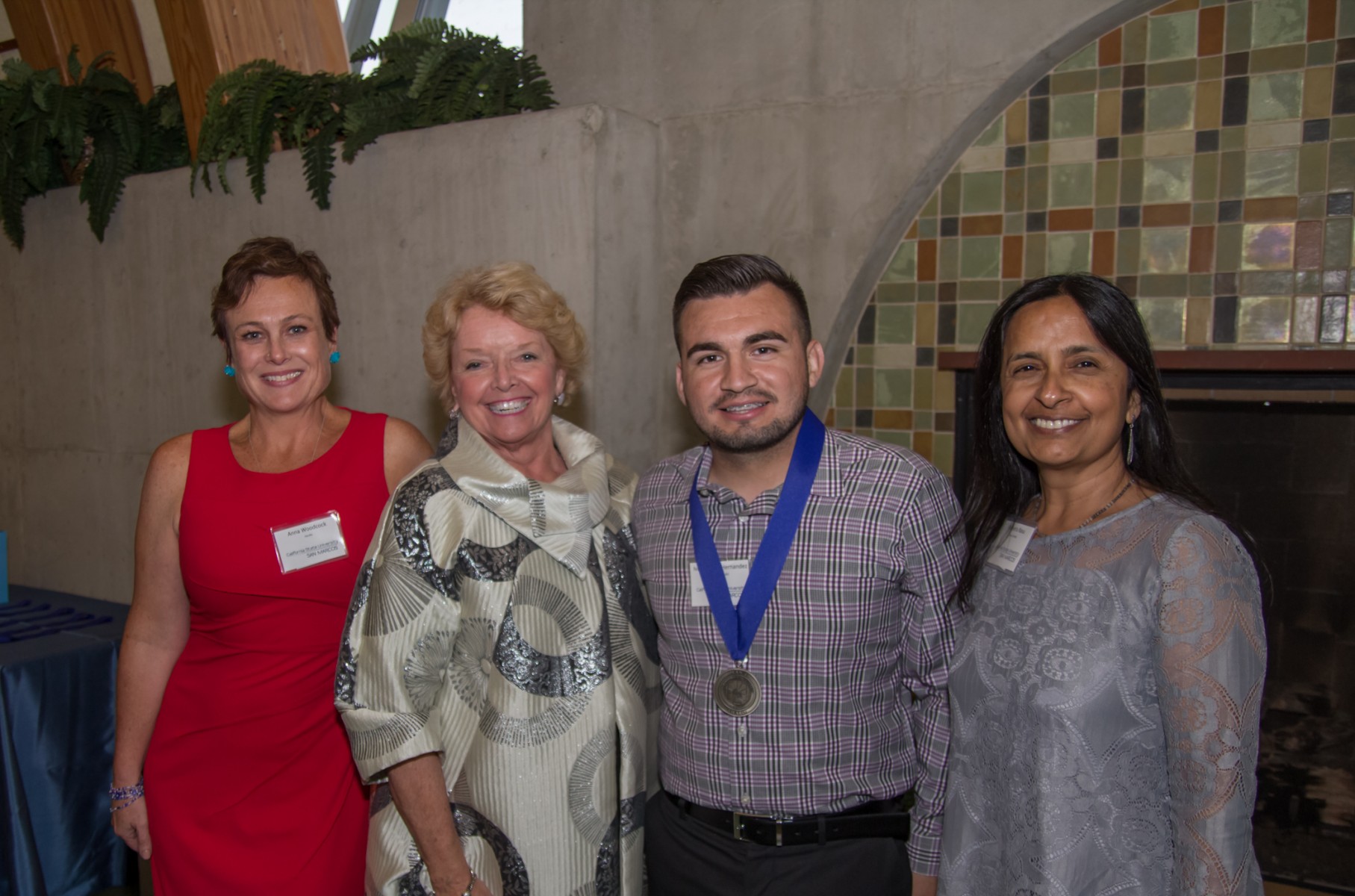 More than 3,300 students are expected to graduate from Cal State San Marcos this month. On May 1, six standouts from the Class of 2017 were honored at a special awards dinner to celebrate their achievements.

Honorees were nominated by faculty or staff and endorsed by their college’s dean. Here is a closer look at each award winner:

Ivan’s parents moved to the United States from Mexico shortly before he was born, and he is the first in his family to earn a college degree.

Throughout high school and into college, Ivan was focused on working as a way to contribute to his family. However, seeing his younger siblings begin to follow his path caused Ivan to make education his top priority to set a positive example.

Ivan has excelled at CSUSM. He worked for five semesters as a research assistant in the applied social psychology lab. Ivan led a team of undergraduate students and post baccalaureate researchers on a collaborative project with the American Society of Biochemistry and Molecular Biology, investigating how to broaden participation in the biological sciences.

Ivan also was a Maximizing Access to Research Careers (MARC) Scholar, a program for students who show great potential for academic success at the doctoral level.

In 2016, Ivan was selected to represent CSUSM at the CSU Statewide Research Competition where he won first place. He has also presented his research at the annual conference for the Society for the Advancement of Chicanos/Hispanics and Native Americans, and for the Society for Personality and Social Psychology.

Ivan will begin work toward his Ph.D. at Northwestern University in the fall. 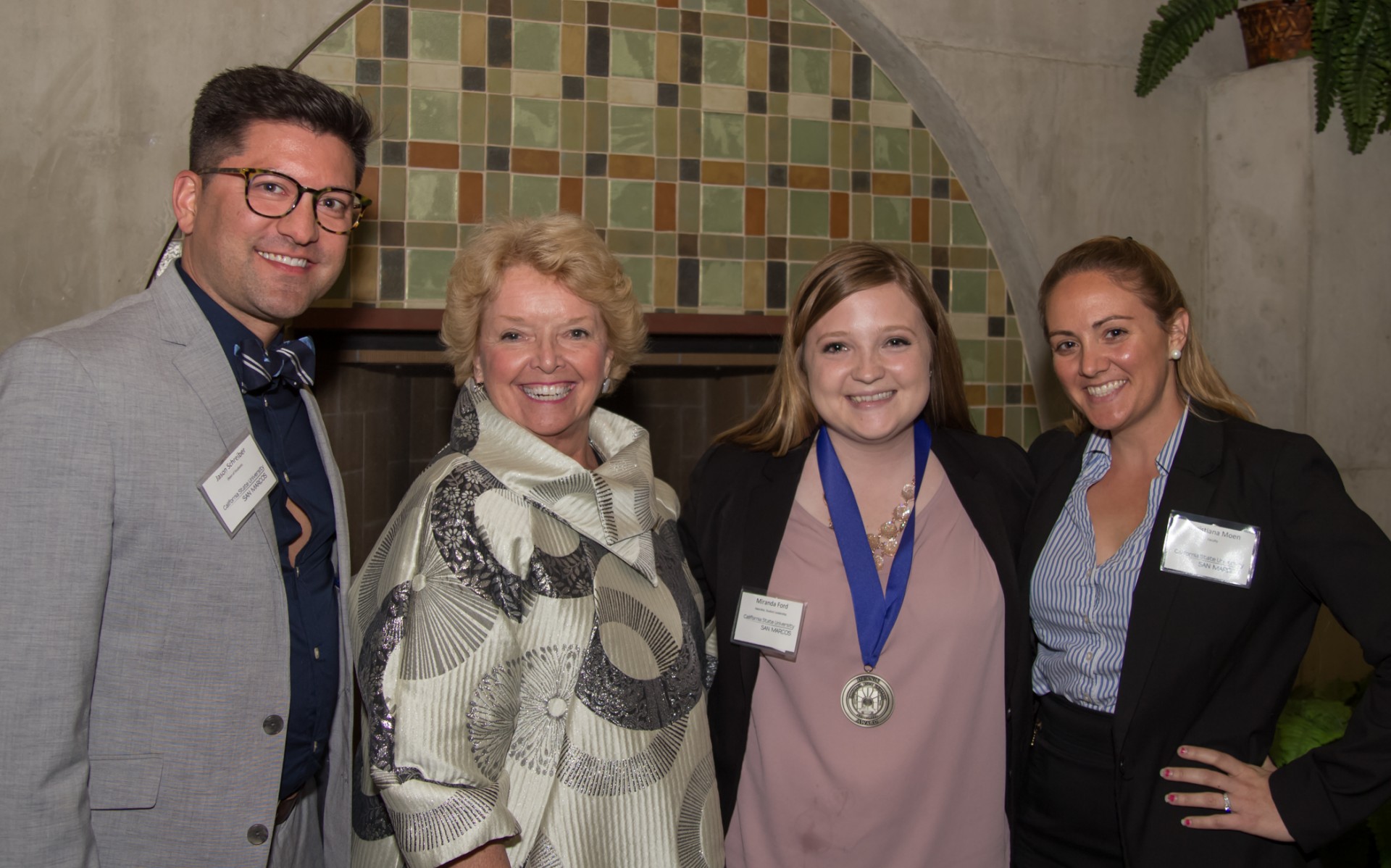 The Dean of Students’ Outstanding Leadership Award is given to a graduating student who has maintained excellence in academic achievements while also exhibiting leadership through student-centered service, inclusiveness, teamwork and innovation.

Miranda Ford was honored for her work as a student leader and STEM champion.

During her time at CSUSM, Miranda served as an SI Leader, facilitating student-centered review sessions; a STEM ambassador leading science activities for young students in the local community; and a STEM tutor, helping students in biology, chemistry and physics.

She was a student assistant in the Early Outreach program for nearly four years, promoting higher education by leading campus tours for K-8 students

Miranda plans to pursue a teaching credential with the goal of teaching STEM Courses. 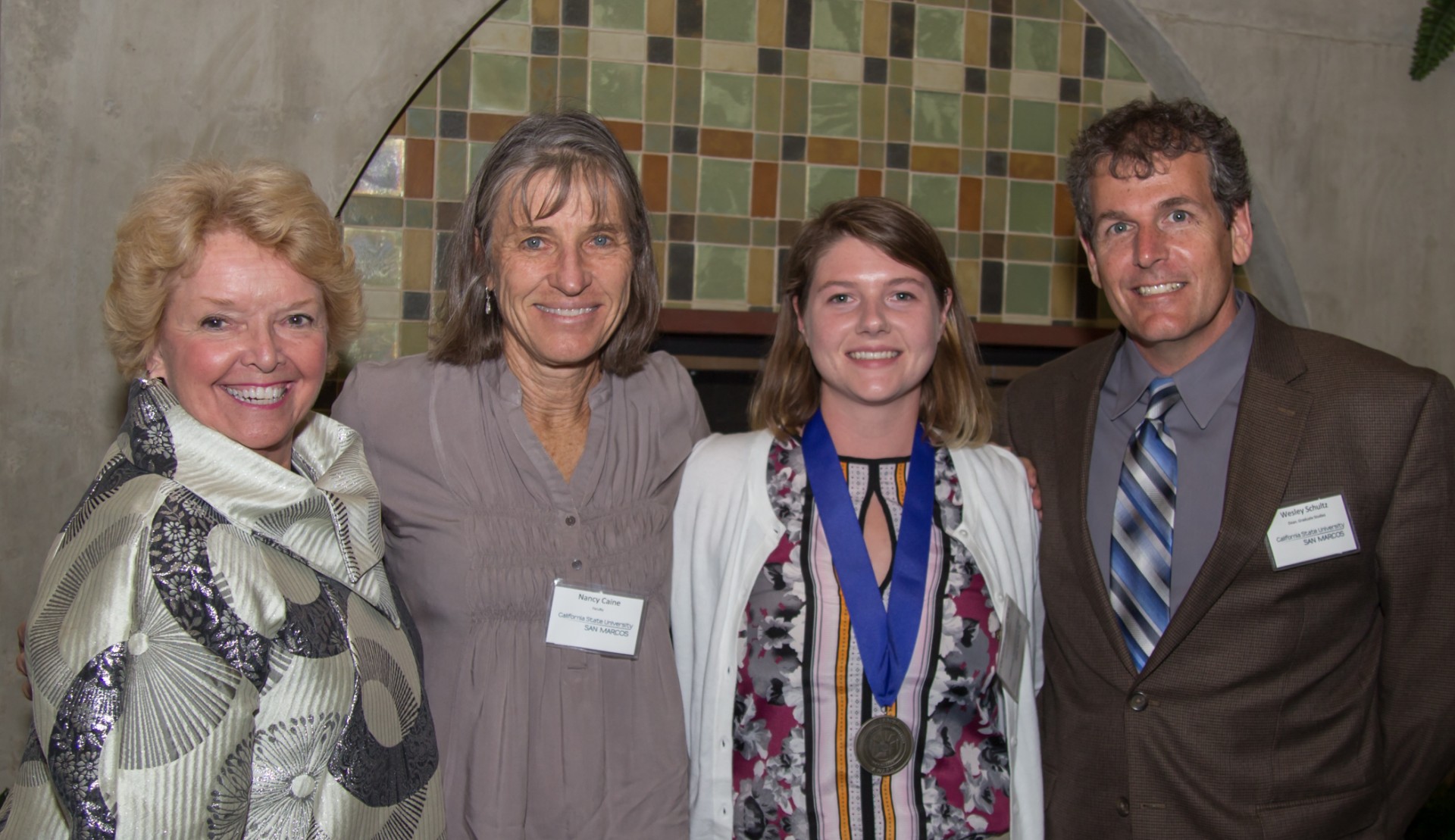 Christie enrolled at CSUSM in 2014 after completing a dual bachelor’s in psychology and environmental studies from Metropolitan State University in Denver. She came to CSUSM to study environmental issues and focus her graduate work on the behavioral aspects of water conservation.

She was given the opportunity to solve a real-world problem during the summer of 2015. California was in its fourth year of drought and an executive order from the governor mandated a 25 percent statewide reduction in urban potable water. In her thesis research, Christie tested the effectiveness of an outreach campaign that would create a more lasting compliance with water conservation goals by highlighting social norms in communicating with residents about efficient lawn-watering practices. Christie and her team provided water use feedback, door-to-door, to nearly 2,000 homes in the Oceanside area.

Christie’s work at CSUSM also included a study of the benefits of a nature experience for urban youth conducted in partnership with the U.S. Forest Service and a continuing project with EDCO to develop effective recycling programs for North County.

Christie’s other contributions included creating an eight-week internship curriculum for four undergraduate research students at the request of psychology faculty. 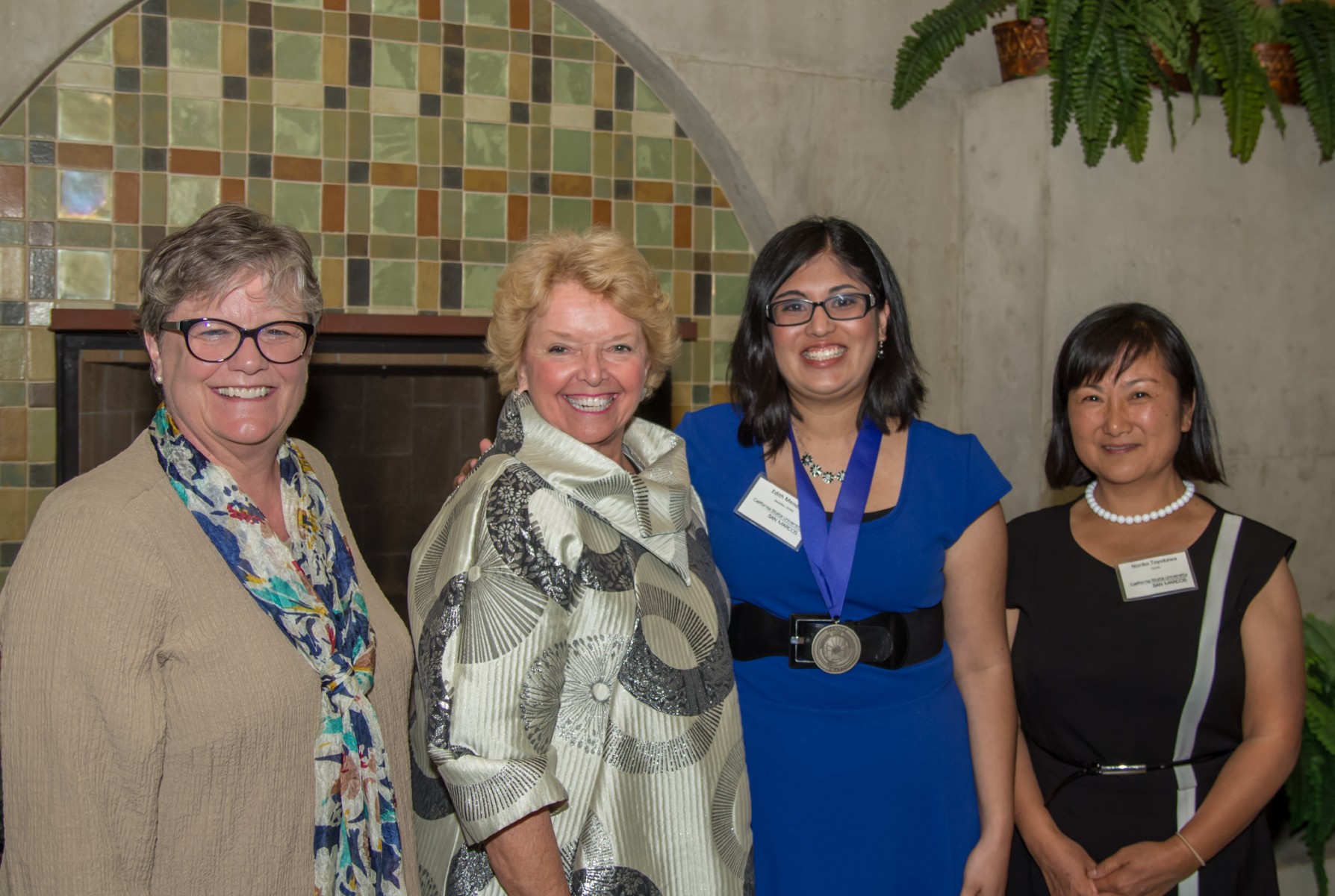 A first-generation college student whose parents immigrated to the United States from Mexico, Edith wants to pursue a career that will allow her to provide guidance to underprivileged college students.

Edith said CSUSM’s Human Development program allowed her to have a well-rounded understanding of how individuals develop throughout their life and how that knowledge can be applied in a human-service setting.

Among Edith’s notable accomplishments was a trip to Australia in January for a study-abroad program in which she helped create hand-made toys for Syrian refugee children. Her work on behalf of Syrian refugees also included participation in a mural painting project.

Edith also worked as a student assistant in CSUSM’s Office of Internships and Community Engagement where she quickly moved up and received more responsibility.

Edith will begin a Higher Education Leadership master’s program at the University of San Diego this fall and aims to eventually become an academic adviser and organize student programs. 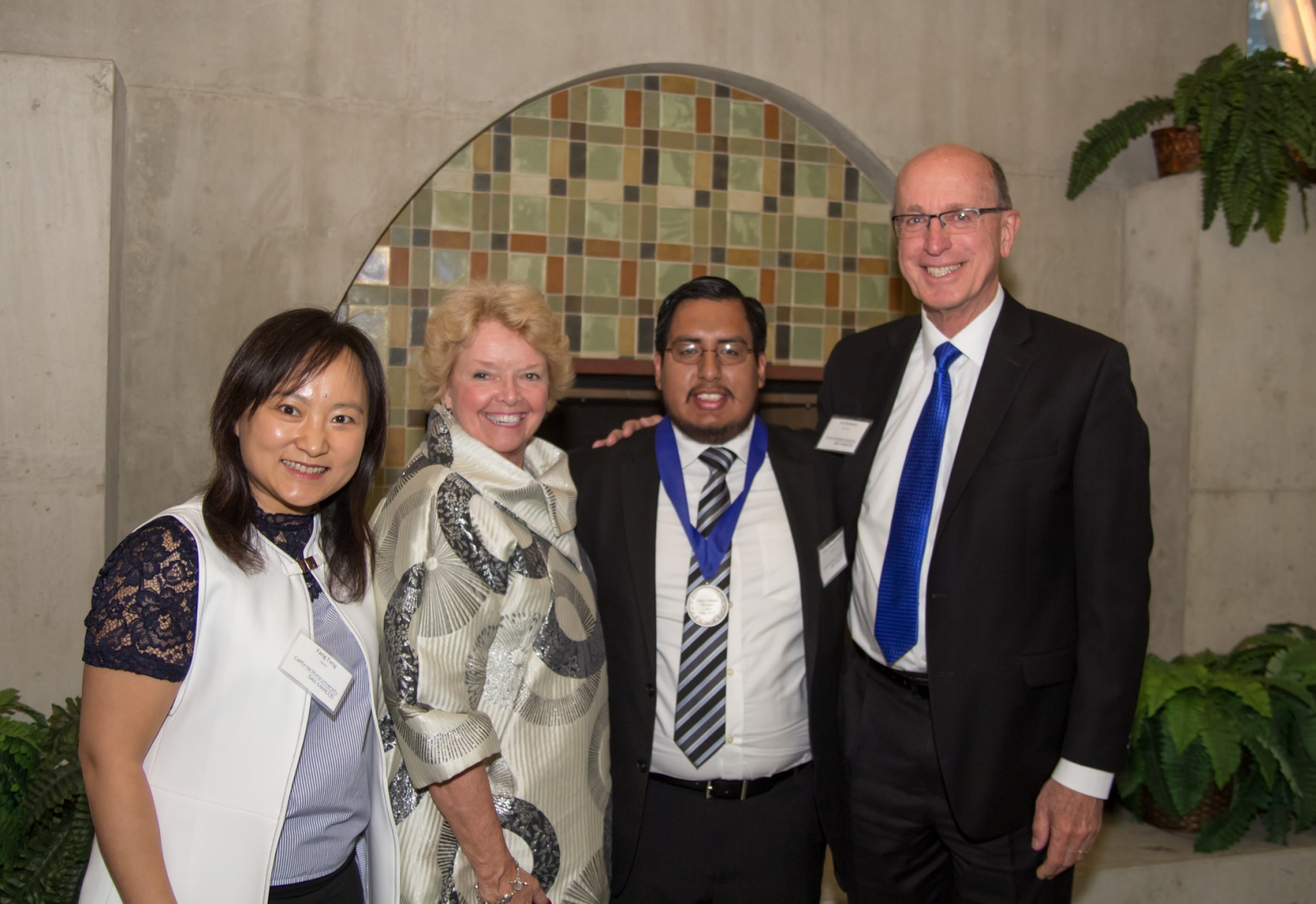 Carlos excelled in both leadership and service positions at CSUSM. His leadership interest was sparked as a freshman by his participation in the Leadership, Education And Development (LEAD) Retreat hosted by Student Life & Leadership.

Among Carlos’ accomplishments was advocating for a Latino Center on campus. He was part of a group that received more than 500 signatures in support of the center, helping the ASI Board of Directors to approve the resolution. The Latin@ Center became a reality with its grand opening in September 2015.

Carlos also participated in “Beyond the Stereotype,” a university-wide awareness project about cultural appropriation and social justice. He received a Certificate of Recognition from state Sen. Joel Anderson for his work.

Carlos received a second Certificate of Recognition from state Sen. Patricia Bates during an internship in which he learned about the process of civic engagement.

Carlos’ numerous achievements include: an internship with the San Diego North Economic Development Council; serving as the CoBA representative on the ASI Board of Directors; serving on the Budget and Long Range Planning Committee; and volunteering for the CoBA Taste of Student Success and the Senior Experience Trade Show.

Carlos’ career goal is to become a chief information officer. 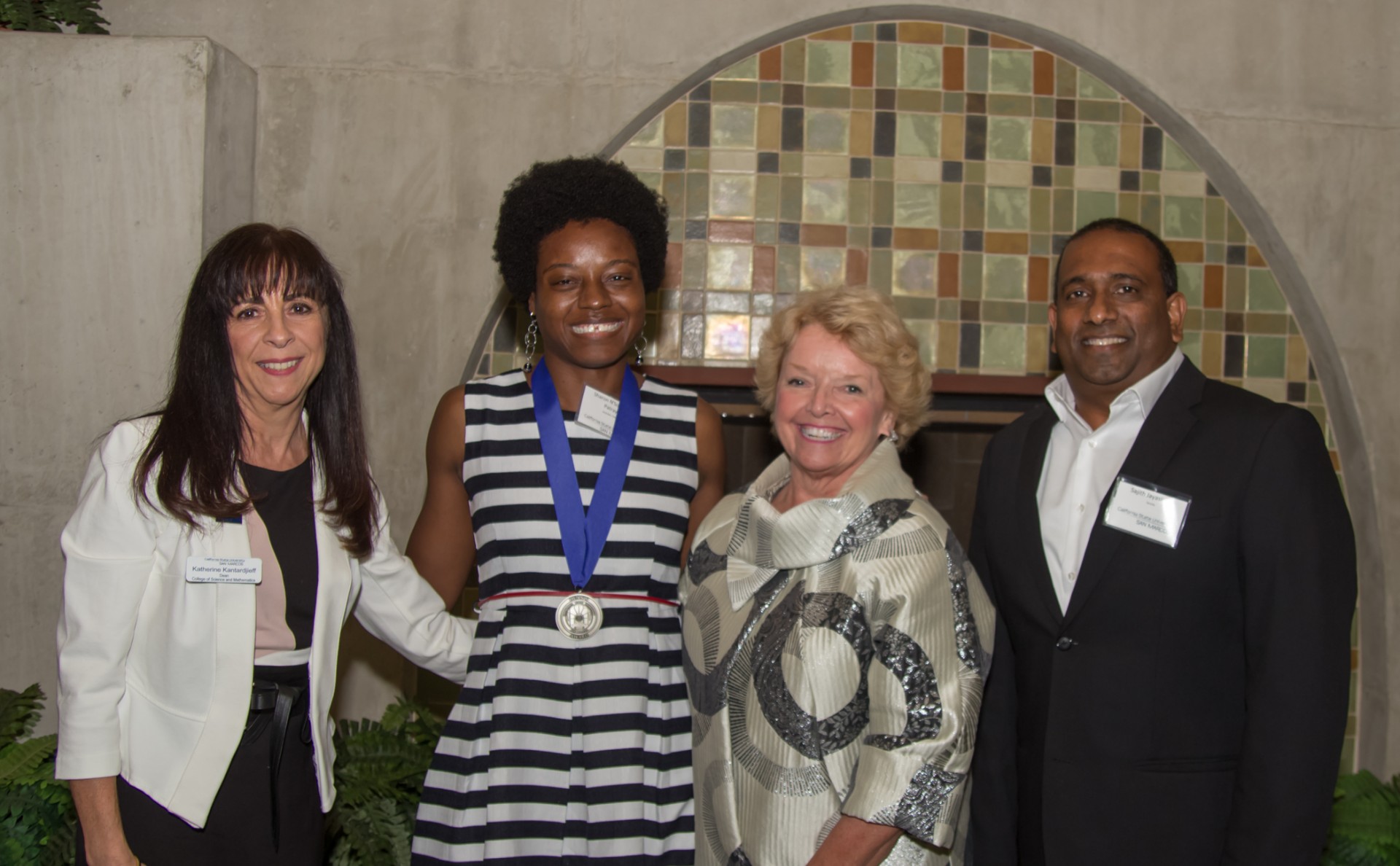 Born in Liberia, Sharon fled with her mom and most of her family to Ghana during the first Liberian Civil War, a conflict that left more than 600,000 people dead from 1989-97. She was 6 years old when she left her homeland, and spent much of the next nine years in a refugee camp.

At 15, Patray landed in Rochester, N.Y., to live with her father. Although she earned a full scholarship to study engineering at Clarkson University, Patray could not capitalize on the offer because she had not yet become eligible for a green card.

Instead, after a year of community college, she enlisted in the Marines where she served for eight years as a combat engineer.

When she left the service, Sharon continued her education at MiraCosta College before transferring to CSUSM. Sharon’s research at CSUSM included expression and purification of CsgE, a protein that helps in the production of bacterial filaments found on the surface of bacteria.

Sharon was a member of the American Chemistry Society club, and the founding vice president of the American Association of University Women’s Club. She was also one of the speakers at the March for Science San Diego in April.

Sharon will begin work toward her Ph.D. in virology this fall at Johns Hopkins.