Meeting Cheech Marin would lead most people to reference one of the dozens of TV shows or films in which the actor has appeared.

Michael Flores took a different approach. He talked about art.

One of the classes Flores took when he attended Cal State San Marcos required a trip to an area museum. He visited one in 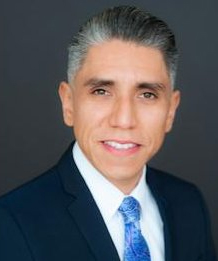 Years later, it provided the perfect ice-breaker when he met Marin.

“The fact that I talked to him outside of film made him more approachable,” said Flores, who graduated from CSUSM in 2007 with a degree in accounting. “It was nice to talk to him about his art gallery. He has an amazing collection.”

It’s not unusual for Flores to rub shoulders with Hollywood notables. A certified public accountant, he has spent most of his post-graduate career working in accounting and finance for entertainment companies in the Los Angeles area.

Flores got his introduction to the entertainment industry through PricewaterhouseCoopers after graduating from CSUSM. His resume also includes stints with Prana Studios, which creates animation and visual effects, and Participant Media, where he worked on films such as “The Help” and “Lincoln.”

Today, he is an accounting manager for WGN America, a TV channel owned by Tribune Media.

“I never in a thousand years would’ve thought I’d be doing what I’m doing,” Flores said.

That unexpected path began at CSUSM.

Flores’ connection to CSUSM goes back to the days of the Prohoroff Poultry Farm, the chicken ranch that operated for decades where the University now stands.

Tina Flores, Michael’s mother, lived on the farm for about nine years in the 1960s before moving to Escondido where she still lives today.

“Mr. Prohoroff was a very kind man to all of the people who lived on the farm,” said Tina Flores, who worked for multiple banks as well as in accounting before retiring. “San Marcos was just the chicken ranch. Everybody went to Escondido to get groceries.”

Tina Flores said Grand Avenue in Escondido was a gathering place for people in surrounding communities such as San Marcos, Ramona and Valley Center. They would visit downtown Escondido to shop at stores like J.C. Penney and Sears and pick up groceries at Rube Nelson’s market.

“Grand Avenue was where everybody knew everybody,” she said.

Michael Flores is too young to have memories of the farm. He grew up in Escondido and was an accomplished student and baseball player at San Pasqual High School. He considered attending San Diego State and trying to continue his baseball career under the tutelage of the late Tony Gwynn, but he also wanted to pursue an accounting degree. With SDSU’s business program impacted and CSUSM offering an impressive student-to-faculty ratio, Flores chose to stay closer to home.

“Cal State San Marcos offered the type of accounting program I was looking for,” he said. “I literally followed the road map that they had at the Career Center and followed it through the accounting suggestions. And I graduated on time in four years.”

Flores did have one more opportunity to give college baseball a try as CSUSM’s fledgling program played its first season during his senior year. But by then he was on a firm career trajectory -- he had a position waiting for him at PricewaterhouseCoopers and didn’t want anything to distract him.

“All I had to do was graduate and stay focused on school,” Flores said. “I didn’t want to get sidetracked by trying to fit baseball into my schedule. And it worked out.”

Flores credits CSUSM’s Accounting Society for having a tremendous impact on his career. He said networking opportunities were invaluable and he also was able to learn about everything from workplace professionalism to dinner etiquette.

“The networking opportunities they provided created a whole path for me,” he said.

Flores, who lives in Santa Monica, said he wouldn’t mind someday moving back to North County to be closer to family and friends. But he also loves working in the entertainment industry, which means staying in the Los Angeles area for now. His work includes dealing with budgets and funding, usually for at least four to five projects at a time. The number of concurrent projects can easily eclipse double digits during busy times.

“There’s constant accounting that needs to be done,” he said.

Flores would eventually like to become the chief financial officer of a studio or a vice president of production finance, and he also wouldn’t mind someday returning to CSUSM as an accounting professor.

“CSUSM offers lots of professional accounting opportunity if you get good grades, go to Accounting Society events and persevere,” he said. “You never know where it may lead you.”