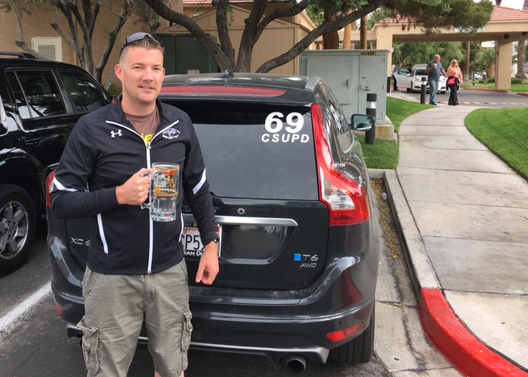 CSUSM Police Officer Matthew Curran and a team of 19 California State University (CSU) Police Department members participated in what might be considered the largest police foot pursuit in the world, the Baker to Vegas competition (B2V), finishing in first place for their division on March 20.

Established in 1986, B2V is a 120-mile law enforcement relay challenge that starts 25 miles north of Baker, Calif., runs through Shoshone, Calif. and Pahrump, Nev., and ends in Las Vegas. There are a maximum number of 270 teams with 20 runners each. The course is broken up into 20 legs ranging from four to 10.7 miles. CSU’s first team competed in 1998.

Members of the CSU police departments rarely work together, and when they do it’s normally in response to natural disasters, terrorist attacks or riots. Working under those conditions doesn’t allow time to build comradery, but this competition gives them a chance to come together for fun and compete as one team. As a result, it allows them to get to know one another and work together more seamlessly in a personal and professional environment.

“I love running,” said Curran, who was on the CSUSM track and field team when he was a student at the University. “It’s important for everyone to stay physically fit, especially in law enforcement.”

Having an annual goal, such as the B2V, to keep training for on a regular basis has given Curran and his other team members a winning edge.

“I have found in the past that if I don’t have something to look forward to, such as a race or some sort of competition, I would fall away from my training schedule because everyday life can easily take priority if we aren’t careful,” said Curran.

It takes more than just runners to make this race successful. Additional personnel including drivers, alternate runners, coordinators and catchers were also present to provide physical and moral support. The actual race participants can be sworn and non-sworn employees of CSU police departments.

“The majority of the runners are police officers, but other runners included parking personnel, community services officers and administrative support staff,” said Curran. “Teamwork is important in every aspect of our lives.”

Eight months ago Curran was assigned leg 8 of the race, which is a 6.6-mile run uphill with a very steep incline for the duration of the last mile.

“I was nervous because I had never competed at that distance before,” said Curran. “I was plagued with injuries during the training season, a strained calf muscle and shin splints, but I worked through them and I was ready on race day.”

Curran’s portion of the race was ranked a five out of 20 in difficulty, the rank of one being the most difficult. Complicating matters, the CSU team , composed of personnel across 23 CSU campuses, were expected to train by themselves and usually without encouragement.

“There were many times when I wanted to slow down and even stop at times because I was struggling so much with the run that night, but I knew my team was counting on me,” said Curran. “I felt awesome at the end of my leg. I was tired but I had a huge sense of accomplishment knowing that I didn’t let my team down and that we were in a good position to win.”

Ultimately the team adapted to the heat, hills and dehydration and overcame them all together, pulling out a victory 30 minutes faster than their closest competitor – the Corona Police Department. The CSU team finished the entire race in 16 hours, 14 minutes and 43 seconds.

“The team ran well and we came out on top moving up in rank for next year as well,” said Jeffrey LaGrange, CSUSM police officer and part of Curran’s support team. “All things being equal we could have the top team in our division for quite some time, so things are looking good for us and for Matt.

Other departments that finished in the top ten of the division include the San Bernardino Police Department, Oceanside Police Department and a team comprised of personnel from the El Cajon and La Mesa Police Departments. The results from this year brought the CSU team from 69th to 52nd place overall.

“The experience was well worth all the time, pain and sweat I put into it,” said Curran. “I was extremely honored to have qualified for this year’s team, and I am looking forward to many more races with these incredibly talented individuals.” 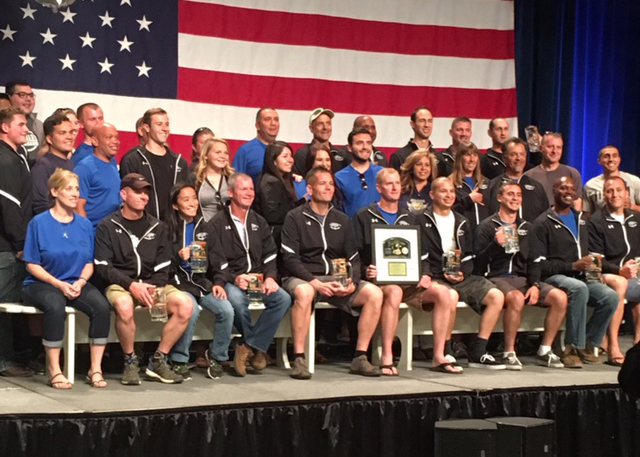