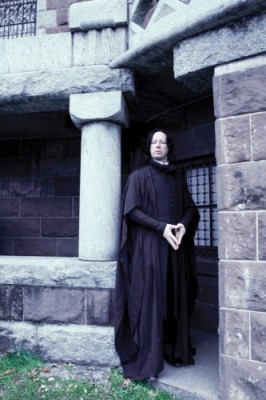 Drawing on the Harry Potter novels, performer V. Nigel Taylor enacts the surly and secretive Professor Snape at Hogwarts School of Witchcraft and Wizardry. The room will become Professor Snape’s classroom as he performs his unique and sardonic brand of teaching while interacting with the audience as if they were students in his course on magical potions. Taylor will also discuss Snape as a tragic hero, the significance of Lily Potter, the effects of bullying and more.

“V. Nigel Taylor has performed his impersonation of the notorious Professor Severus Snape (Harry Potter’s nemesis) at conventions and special events across the U.S.,” said Linda Pershing, Professor of Folklore and Cultural Studies. “The Harry Potter books and films have captured the imaginations of youth and older people alike: Harry Potter novels are among the top-five selling books in world history, and as of 2012, the Harry Potter film franchise was the highest grossing film franchise of all time, with the eight films released grossing over $7.7 billion worldwide. Without adjusting for inflation, this is higher than the first 22 James Bond films and the six films in the Star Wars franchise.“

Tickets: Buy tickets online only: CSUSM students are free, $7.50 for CSUSM faculty/staff, $15 for community members, and $5 for children 12 and under with accompanying adult.