CSUSM Ranked Among Best Universities for Vets in CA 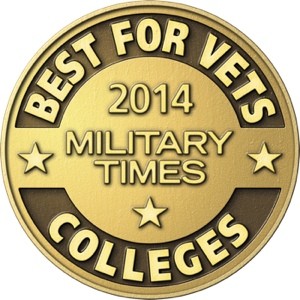 California State University San Marcos (CSUSM) has been named to Military Times’ Best for Vets: Colleges 2014 list. This distinction recognizes and rewards colleges across the nation that demonstrate a commitment to providing educational opportunities to America’s veterans.

This year CSUSM ranked No. 41 out of 86 four-year universities. It is the third-highest rated university in California.

CSUSM has the highest percentage of student-veterans per capita of any university in the California State University system. The campus supports its more than 1,100 veteran, active duty personnel or military dependents through the CSUSM Veterans Center, which provides academic support and student services from the application process through graduation. Earlier this month, Cal State San Marcos officials broke ground on a new, stand-alone veterans center will be in use by fall 2014.

The University's veteran-friendly approach to higher education is also supported by such initiatives as the War at Home and Abroad digital history archive project, the Veterans Student Support Fund and veteran specific scholarships.

CSUSM Ranked Among Best Universities for Vets in CA