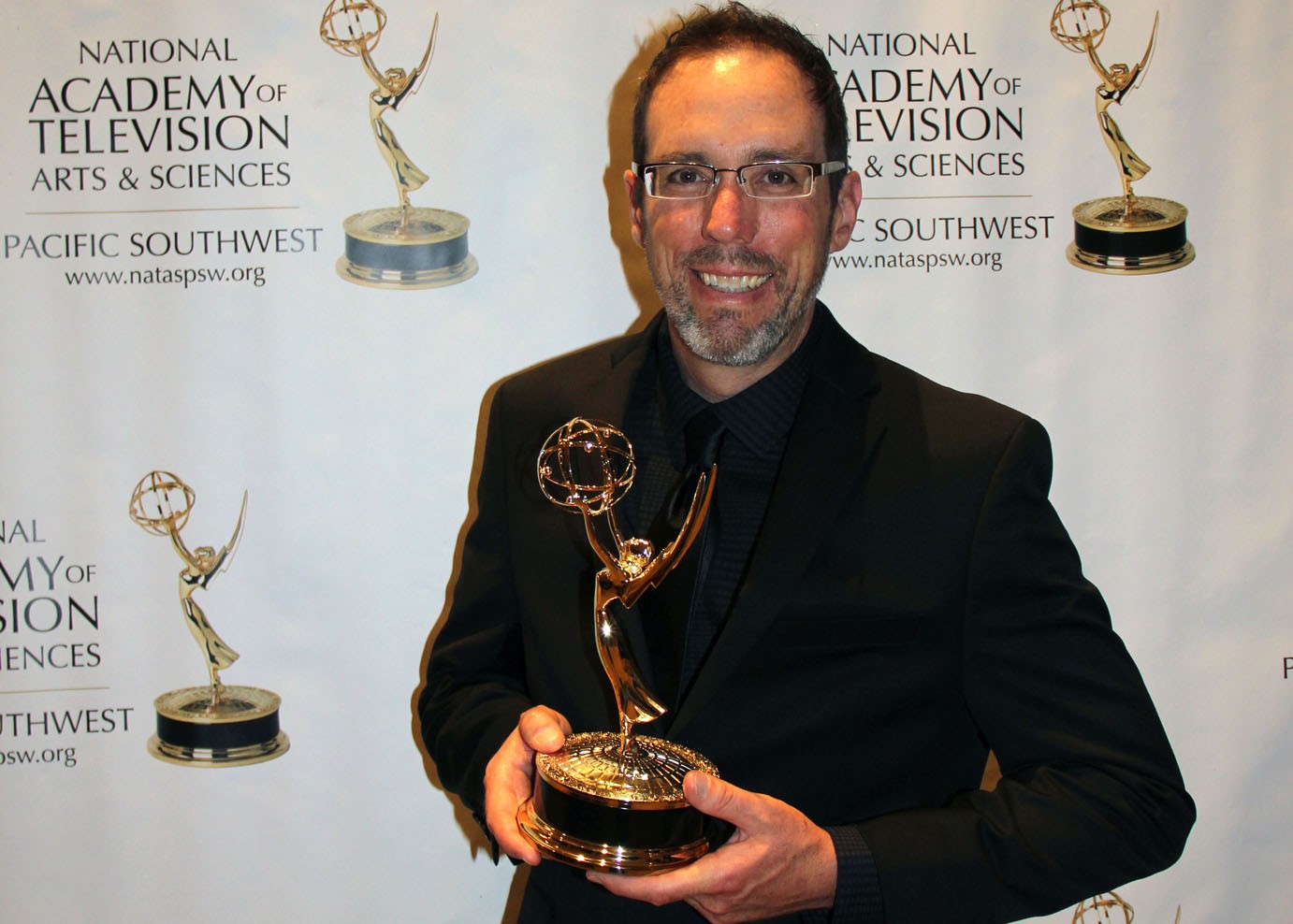 Luke Bisagna started his career with a certificate in accounting, endlessly crunching numbers and performing as a musician on the side at local clubs at night and on the weekends.

“I spent years working with numbers and I began to feel my creative potential slowly rot away inside me,” said Luke, a Cal State San Marcos arts and technology student.

“I didn’t always know I would be involved in video or film. But my musical background was the pathway that ultimately led to doing post-production sound for film.”

Today, Luke is the recipient of three Emmy Awards.

“Each time it was an absolutely unreal experience,” Luke said. “Thrilling to say the least. I will say, however, that I knew it was possible, and that I believed that putting in the time and diligent effort toward that goal would pay off someday.”

Luke’s most recent project was a collaboration with the rest of the team at Palomar College Television, directed and produced by his colleague Bill Wisneski. The project, titled Joshua Tree: Threatened Wonderland, tells the story of Joshua Tree National Park, with its mysterious rock formations and iconic trees that have long provided a haven for those seeking an inspirational experience.

The film also covers current threats from air pollution, fires and global warming, which scientists believe may cause the disappearance of the majority of the Joshua trees in less than 100 years, changing this land forever.

Luke’s role in this documentary was as the post-production sound designer and audio mixer, earning him an Emmy Award in the Audio category.

“My approach was to strike an emotional chord with the audience by providing a rich, immersive and realistic sonic experience,” he said. “I traveled extensively through the park on several occasions recording environmental ambience, wildlife and other sounds unique to Joshua Tree in order to enrich my audio palette in post-production.

“I was motivated to create a soundscape that was as true as possible to the actual sonic landscape that can be heard in Joshua Tree National Park.”

But the road to an Emmy wasn’t that easy. Luke noted that some of his biggest challenges dealt with accurately conveying the dynamic nature of the changing environment and its effect on the iconic trees.

“The editor, Chris Culp, reflected this aspect by utilizing many time lapses and various speed effects throughout the piece,” Luke said. “My part involved supporting those visuals with sound that impressed the feeling change and movement upon the audience. That change and movement is certainly occurring, but is difficult to perceive on any one given day. So I often blended non-natural, synthesized sounds with the natural sounds of the high desert landscape and then further transformed those hybrid products to yield elements that helped to pull the audience into each scene and through the entirety of time covered by this documentary, even to the point of reaching into the future.

“My hope is that someone would not simply ‘watch’ this film, but actually experience it in an immersive sense.”

Luke had already won his first Emmy and completed another project that would land him his second by the time he enrolled at CSUSM as a School of Arts student, but he has attributed some of his success to the collaborative efforts of faculty here.

“My creative approach was greatly enhanced by my experiences at CSUSM,” Luke said. “All my professors contributed, but there were three that really resonated with me and that I remember every time I begin work on a new project: Kristine Diekman, Judit Hersko and Lucy HG Solomon. They pushed me outside my comfort zone and toward new creative spaces, and I am very grateful for their advice and encouragement.”

Following in their footsteps, Luke currently teaches at two community colleges and hopes to continue to pass on his creative talent. After finishing his bachelor’s degree, Luke plans to pursue a master’s degree to open up more teaching opportunities in the future.

Luke’s other Emmy Awards were for projects titled Larger Than Life: The Story of the Northern Elephant Seal and Threatened: The Controversial Struggle of the Southern Sea Otter.

To learn more about Luke Bisagna’s work and projects, visit his website.