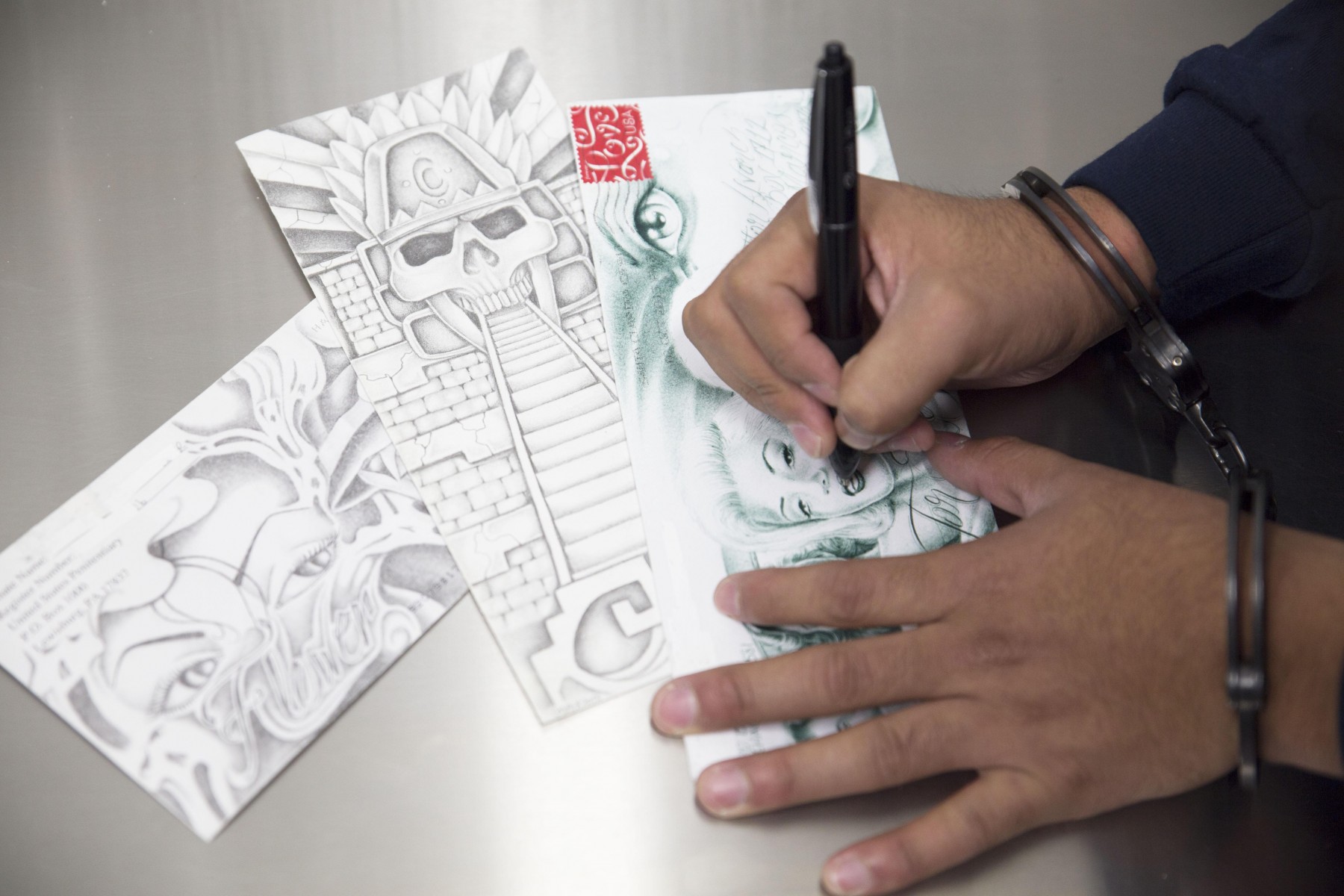 Homie UP | Artwork in photo contributed by Louie, Homie UP student
Homie UP students sometimes submit assignments in the form of art, allowing them to express what they have learned creatively.

When a group of California State University San Marcos (CSUSM) students started sending curriculum to a seven-student cohort in prisons throughout Southern California, they never thought their program would grow to more than 200 active students behind bars across the United States.

Homie UP, short for Homie Universidad Popular, is a program that offers American history from a Chicano/Latino perspective free of charge to incarcerated individuals. The initiative started after community members participating in a similar curriculum known as Universidad Popular, or People’s University, expressed interest in presenting the information they were learning to their incarcerated loved ones.

“The program was initially intended for those serving a life sentence, but then we received so many requests, we felt compelled to make it accessible to all incarcerated individuals regardless of sentence length,” said Flor Alvarez, a Homie UP coordinator and National Latino Research Center (NLRC) Research Assistant.

As the popularity of the program increases, the program coordinators are beginning to feel some growing pains as their staff and funding remains the same.

“We have spent countless hours creating the Homie UP curriculum and reviewing assignments— sometimes we work overnight or even on the weekends,” said Alvarez. “It’s all on a volunteer basis, so many times we pay out of pocket to send assignments. When we are fortunate, some family members will contribute stamps, paper and envelopes.”

When the program was at its infancy, all the students were of Latino decent. Now, Homie UP’s student base is very diverse and includes both male and female inmates of all ethnicities convicted of a variety of offenses. The team’s future plan is to offer an increased variety of classes, and not just from a Latino perspective.

“This project has really catapulted us into this national discussion that’s going on around incarceration,” said NLRC Research Director Arcela Nuñez-Alvárez. “Our project is very much aligned to issues that happening nationally and at the state level and locally.”

A $10,000 grant from California Humanities has allowed the team to tell the story further through a documentary titled, Homie UP: Stories of Love and Redemption. The grant supports documentary films, radio and new media productions that enhance the community’s understanding of California and its cultures, peoples and histories.

The team had a one-year turnaround time to create the film and worked with filmmaker Jennifer Myhre, as well as an advisory group consisting of CSUSM professors David Avalos, Bonnie Bade, Marisol Clark-Ibáñez and Charles “Chuck” Allen.

The hour-long documentary recently received accolades and was presented with a Silver Award by the Spotlight Documentary Film Awards in December 2015.

So far the award-winning film has hosted 10 screenings throughout California from San Diego to San Francisco. The documentary features real students who have been released from prison, and family members. Screenings are usually accompanied with an art exhibit displaying the work of Homie UP students, as well as a panel discussion about how the prison system affects the entire community.

According to Nuñez-Alvárez, there is still a lot of discussion to be had concerning families, inmates and the so-called school-to-prison pipeline, a systematic process by which students, primarily African Americans and Latinos, are pushed out of the mainstream educational system and channeled into the criminal system.

“This happens through harsh and discriminatory school discipline policies,” said Nuñez-Alvárez. “Research shows that students of color receive harsher punishments. Incidents at school tend to be the first encounter with law enforcement and thus begin the pathway to jail or prison.”

The documentary is now being used as an educational tool for the community. An expansion of the documentary, which looks at why certain populations are over represented in prisons and in jail, is already in the planning stages.

“There is finally a shift of dialogue,” said Lilian Serrano, CSUSM alumnus and NLRC research coordinator. “Everyone can talk about the numbers, but the film gives faces to mass incarceration. For every person that is in prison, there is a mother, a father, a sibling or even children. I think that is a contribution to the discussion that no one else is making and that’s what makes this project unique.”

To learn more about Homie UP or to view an upcoming screening of Homie UP: Stories of Love and Redemption contact NLRC at 760-750-3500. 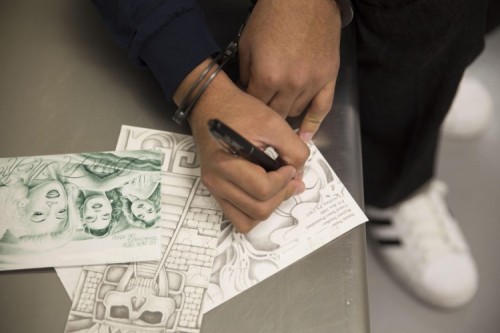 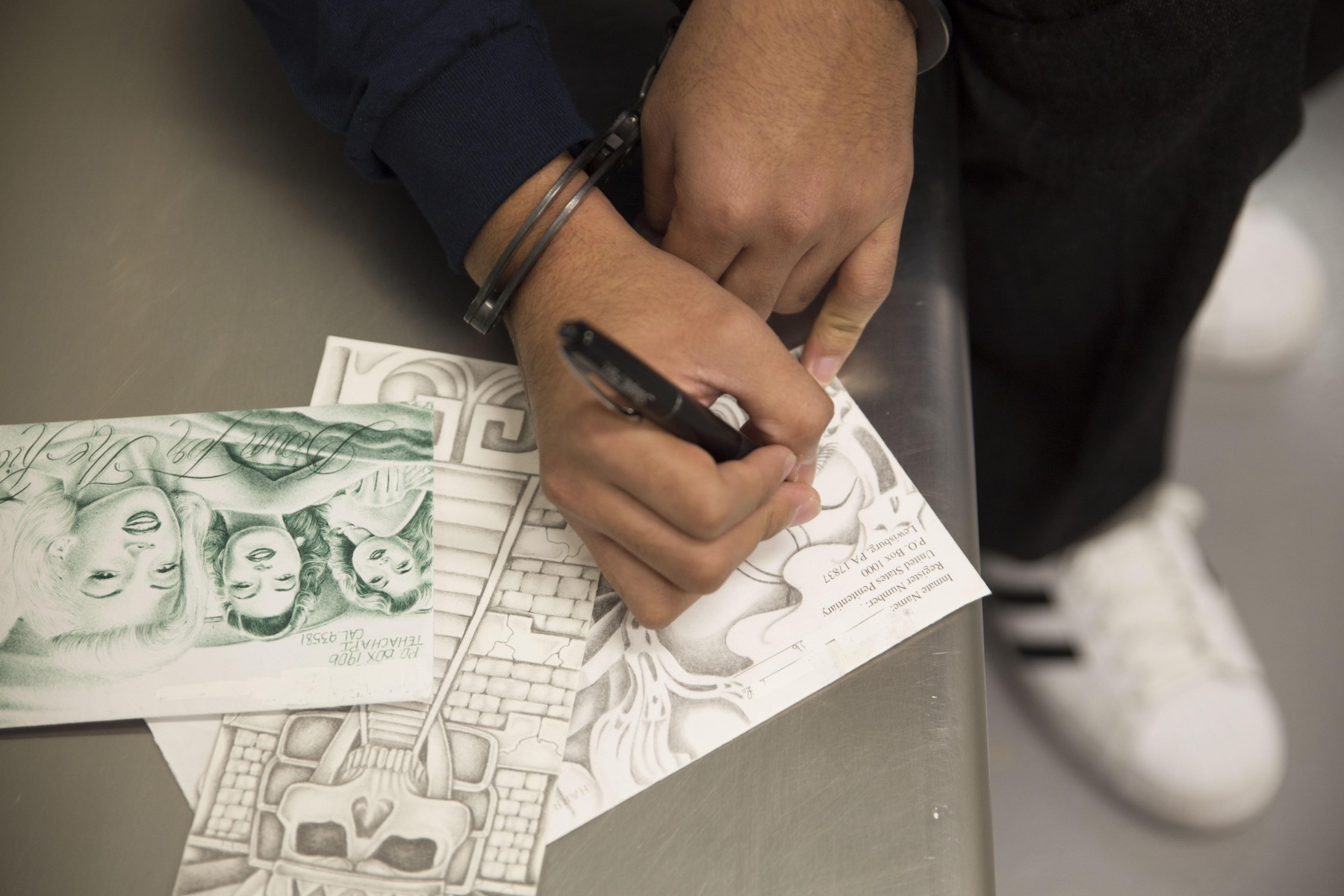 Homie UP | Artwork in photo contributed by Louie, Homie UP student
Homie UP students sometimes submit assignments in the form of art, allowing them to express what they have learned creatively.
NewsCenter