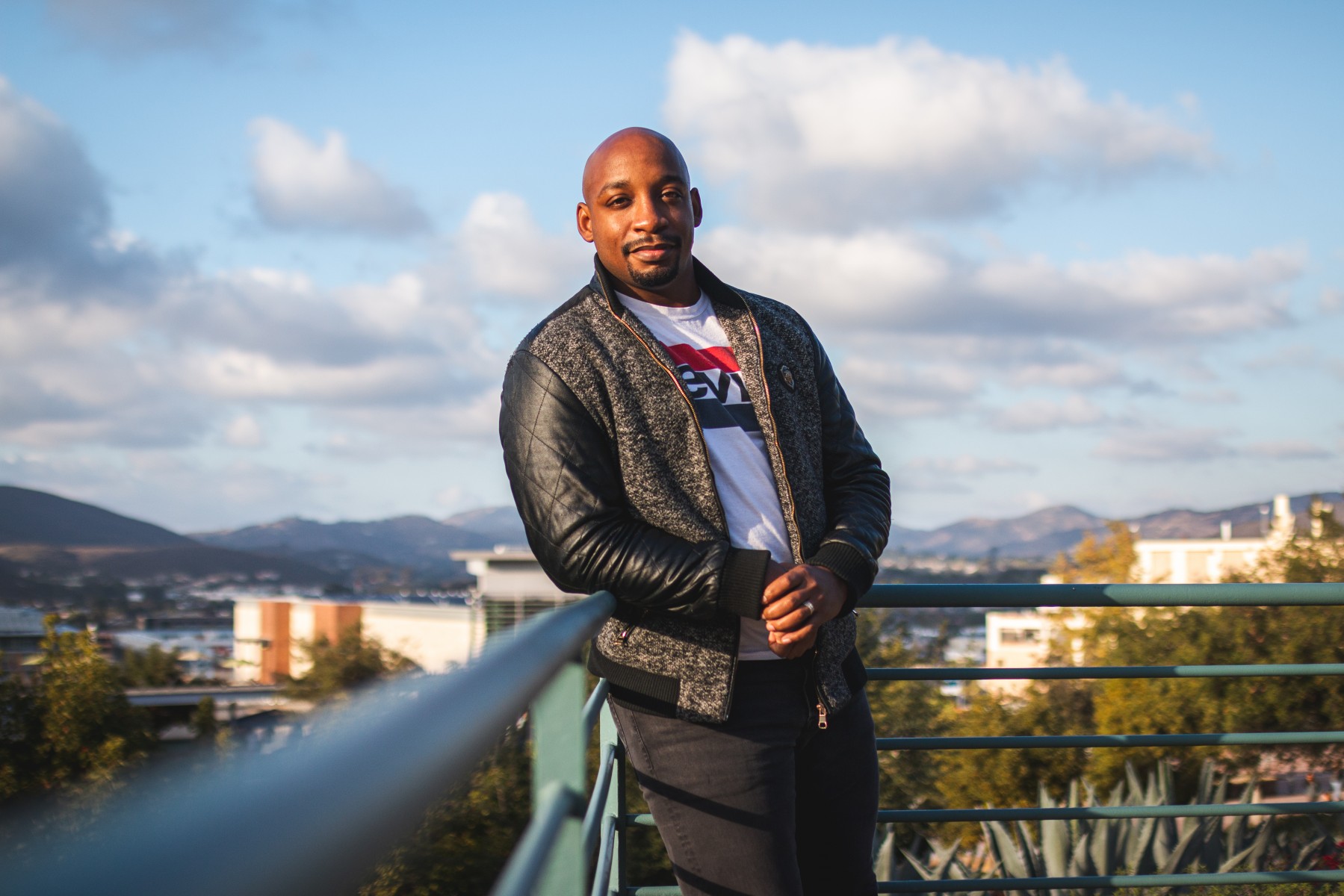 David Falconer is one of four recipients from CSUSM to earn a 2019 Veteran Student of the Year Academic Scholarship awarded by the San Diego Military Advisory Council Foundation. Photo by Long Truong

When most college students earn a scholarship, the money goes toward helping offset the price of attending school.

For David Falconer, it quite simply changed his life.

Falconer was one of four recipients from CSUSM to earn a 2019 Veteran Student of the Year Academic Scholarship awarded by the San Diego Military Advisory Council (SDMAC) Foundation. The scholarship for veterans of military service is intended to bridge the tuition gap between the time when GI Bill benefits expire and the amount of time it takes to complete an undergraduate degree in the science, technology, math and engineering (STEM) fields.

Three other CSUSM students were also honored with the scholarship, all of whom are veterans of the Marines. Jeff Foertsch and Michael Tobin are both majoring in computer science and information systems, and Jason Burley is pursuing a bachelor’s in biochemistry with a minor in Spanish.

Falconer grew up in New York and spent the first 19 years of his life there before enlisting. While he knew college was always going to be in his future, he decided to delay that plan for an unselfish reason.

“I joined the Marine Corps because I love my parents so much,” Falconer said. “I didn’t want to burden them with having to pay for me to go to college. I felt like the military, especially the Marine Corps, was a way to take care of myself and be able to make money while I was doing that. As soon as I left home, they didn’t have to pay a cent for me.”

In his eight years of active and reserves duty, the 27-year-old Falconer was stationed at Marine Corps Air Station Miramar and saw duty in places such as Japan, Hawaii, South Korea, and Guam, where he met his wife Kelyann, who is currently serving in the Army. They have two children: a son, 5, and a daughter, 1½.

While on terminal leave from active duty in December 2015, he got a position at Viasat as a network security representative, where he helps maintain closed-area government programs. By February 2016, he was working full time at Viasat while also joining the reserves.

Falconer eventually added full-time student to his résumé when he enrolled at CSUSM in spring 2018. Going to school full time while also working in the STEM field full time and serving in the reserves has been quite the challenge.

“This past year and a half has probably been the hardest thing I’ve ever done in my life, including going to boot camp,” Falconer said. “Every single day when I wake up, I have to be 100 percent on my ‘A’ game for every aspect of the day. Wake up on time, make sure I produce at work, and then get to school and make sure I’m ready to soak up information and then apply that information. Then come home and make sure I’m loving and open and receptive to my family after a long day.

“It’s a 12-hour day at minimum, and that’s not including homework. Hands down it’s the hardest thing I’ve ever had to do.”

Falconer makes it clear there’s only one reason he survived that first semester and has thrived since: support. He felt it the moment he stepped on campus.

“As soon as I got there, they had a transitioning class for veterans, which helped me get settled right in,” Falconer said. “I’m 100 percent sure I’d be lost without the veteran programs. I still go to those organizations and ask for guidance today. They’re crucial to everything Cal State San Marcos is.”

Three members of the CSUSM community in particular stood out when Falconer has needed help: recently retired Director of Veterans Services Patricia Reily, who nominated him for the scholarship last year, Veterans Retention Counselor and alumnus Moses Maddox (’12) and Chrystal Hady, a senior academic adviser.

“While we have only had the chance to sit down a couple of times, Moses has been an example of someone that I would like to emulate,” Falconer said. “He’s a Marine as well and has had straight conversations with me. (Hady) is an amazing adviser. She has helped plan my journey every step of the way at CSUSM. She has helped me balance out classes with my busy work schedule. When I first came to CSUSM I was in line to get four transfer credits for my time in the service. She helped me track down leaders of each department to plead my case and have my time in the military equate to 14 credits.”

While he plans to grow at Viasat, Falconer’s long-term goal is to return to CSUSM to get a degree in business and open his own company in web design marketing.

His story is one of not only reaching out for help and accepting it from various sources, but also paying it back by sharing wisdom with students who are about to embark on the same journey he began years ago.

“Reach out to people,” Falconer said of the advice he would give. “Talk to people. Learn people. If people see that you’re motivated and want to succeed, they’ll reach out a helping hand and take care of you. That’s what my journey has been. I’ve had countless people take care of me and show me the way, show me the path. That’s the only reason I’m here and able to take care of my family. Keep those around you that you know are good and cherish them.”