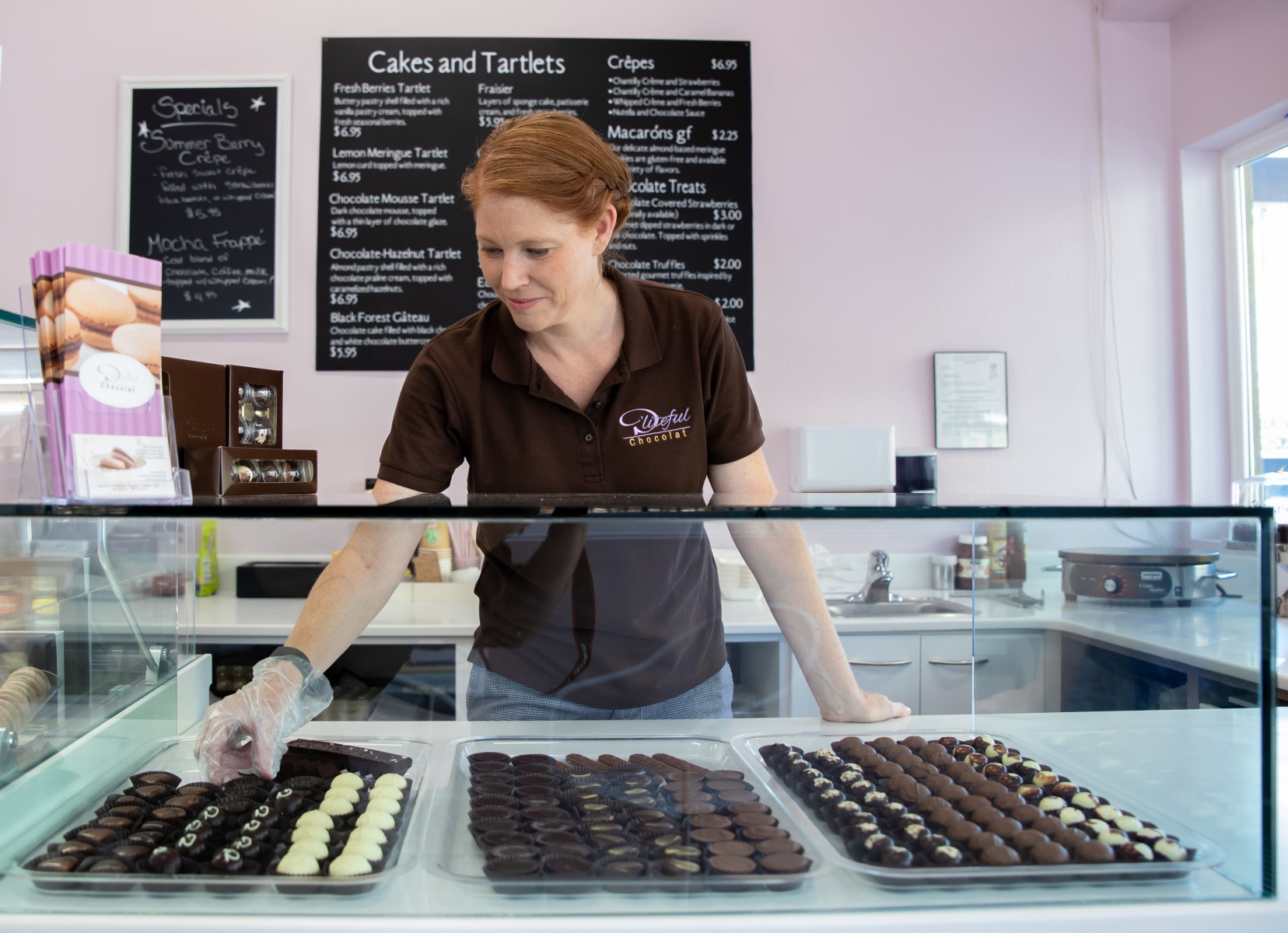 For many people, deciding what to give family or friends for a special occasion can be agonizing. For Dayleen Coleman, it was a piece of cake, so to speak.

Coleman, for a certain period of her life, was the cake lady. Birthday party? Bake a cake. Baby shower? Bake a cake.

She loved being in a kitchen generally, and baking specifically, as a creative outlet and as a stress reliever after a long day working with at-risk youth at Casa de Amparo or helping to develop the Master of Social Work program at Cal State San Marcos. And she was good at it, too. She watched countless YouTube videos to perfect her technique, and when that didn’t do the trick, she took local classes in baking and cake decorating.

Coleman acquired all the knowledge she needed to make her the queen of the bake sale. Yet still she craved more. So when her husband was given an opportunity to move to England as part of his job with Viasat, she read it as a sign from the universe.

She applied and was accepted into Le Cordon Bleu London, the most competitive branch of perhaps the most prestigious culinary school in the world. For almost a year, she trained under renowned French pastry chefs. She learned the scientific underpinnings for the recipes she already had mastered, plus dozens of new ones (and not just desserts, either). She discovered that, in addition to cakes, she possessed a rare gift for making chocolate.

And when she and her family returned to San Marcos in 2016, Coleman had everything she needed to turn her education into a fresh career. She started D’Liteful Chocolat, a patisserie and chocolatier that she operated out of a commercial kitchen in an industrial park for two years before opening a retail shop in Lake San Marcos last summer.

“When somebody comes in and asks how the macarons are made, I can tell them,” said Coleman, who graduated from CSUSM in 2005 with a degree in human development. “If they say, ‘Oh, I tried it, and all my macarons exploded,’ I can say, ‘You overaerated, you put too much air in them.’ They show me a product, and I can tell them exactly where they went wrong. Because I understand every single step of it. And that’s what I got from Le Cordon Bleu.”

The storefront that D’Liteful Chocolat (the “D” in the name stands for Dayleen, and the “Chocolat” is a nod to her French training) moved into last June represents a charming new public face of a company that has thrived behind the scenes since its founding in 2017. It’s located in a quaint shopping center across the street from the Lakehouse Hotel & Resort, and Coleman speaks fondly about how often hotel guests on vacation stroll by and are delighted to discover her delectable offerings (“It feels more like a destination location than just some place in a strip mall,” she said).

The opera cake is Dayleen Coleman's best-selling item. Photos by Christine Vaughan
Coleman adds a touch of artistry to every confection she makes.
The lemon tart is among Coleman's most popular desserts, but she has never tried it because of a citrus allergy.

The walls of D’Liteful Chocolat are painted in Coleman’s trademark pastel purple, and every piece of equipment and decoration bears her imprint. Her big splurge was a temperature-controlled display case from Italy that she has dubbed “the shrine.” Inside it are such treats as her colorful macarons – flavors include strawberry, raspberry, lemon, orange, coffee, salted caramel, vanilla bean and chocolate – chocolate mousse, crème brûlée and a lemon meringue tart. The adjacent case contains an assortment of gourmet chocolates and truffles, and she also makes crepes with fresh berries and chantilly cream that some customers tell Coleman are better than those they can find in Paris.

Coleman is frequently asked about her favorite and most popular dessert. The answer is the same: opera cake, which is an almond sponge biscuit soaked with coffee syrup, layered with dark chocolate ganache and coffee butter cream, and topped with a chocolate disc. When the shop inevitably sells out of them, Coleman says, people will buy one anyway, simply to reserve it for the next day.

“Her opera cake is to die for. That is my favorite,” said Tracy Hall, a CSUSM human development lecturer who has been a close friend of Coleman’s for years. “She could work at any five-star restaurant with her talent. These are just exceptional desserts, and they’re beautiful. She has the creativity, the artistic flair, the knowledge. Yeah, she has it all.”

As well-received as the brick-and-mortar shop has been, it’s just one small part of Coleman’s business. She caters private events, sells chocolate at wholesale, designs and creates wedding cakes, and runs workshops and team-building exercises. In the past six months, as a sign of her enduring connection to CSUSM, she made a cake in honor of the retirements of former President Karen Haynes and First Gentleman Jim Mickelson; put together a special box of chocolates for Haynes’ successor, Dr. Ellen Neufeldt; whipped up special cupcakes to celebrate Kellogg Library’s 15th anniversary; and did team-building for the College of Business Administration and the School of Education.

With the opening of the store, Coleman now supplements the half-dozen or so monthly private events at external locations with four workshops held in the kitchen of D’Liteful Chocolat – one featuring macarons and one chocolate for adults and children apiece. The workshop idea is something she brought back from her time in England, when after finishing at Le Cordon Bleu she worked for a company called Chocolate Craft and got involved with team-building events throughout the country.

“I would do sessions on private islands on the Thames, Henry the VIII castles from the 1500s. I had to pinch myself through the whole thing sometimes,” Coleman recalled. “I found that my passion was in teaching. I loved it. Because I love chocolate, and I love seeing other people getting to work and play with chocolate and have the same experience.”

Everything about living abroad might once have seemed fanciful to Coleman, a first-generation college graduate who was raised by a single mother in California’s Central Valley. She was working at CSUSM, and serving as president of the Alumni Association, when the England opportunity arose. Because the office where her husband, Curt, was to work is in Wareham, 116 miles southwest of London, the family chose to reside in a small village called Bishopstoke that’s roughly in the middle.

While her daughters, then 8 and 4, attended the local public school (and wore very British uniforms), Coleman would board a train and commute about 90 minutes to Le Cordon Bleu in the heart of London. The intensive program was four days a week for 10 months, and Coleman was the only American in her patisserie cohort of 15 students. 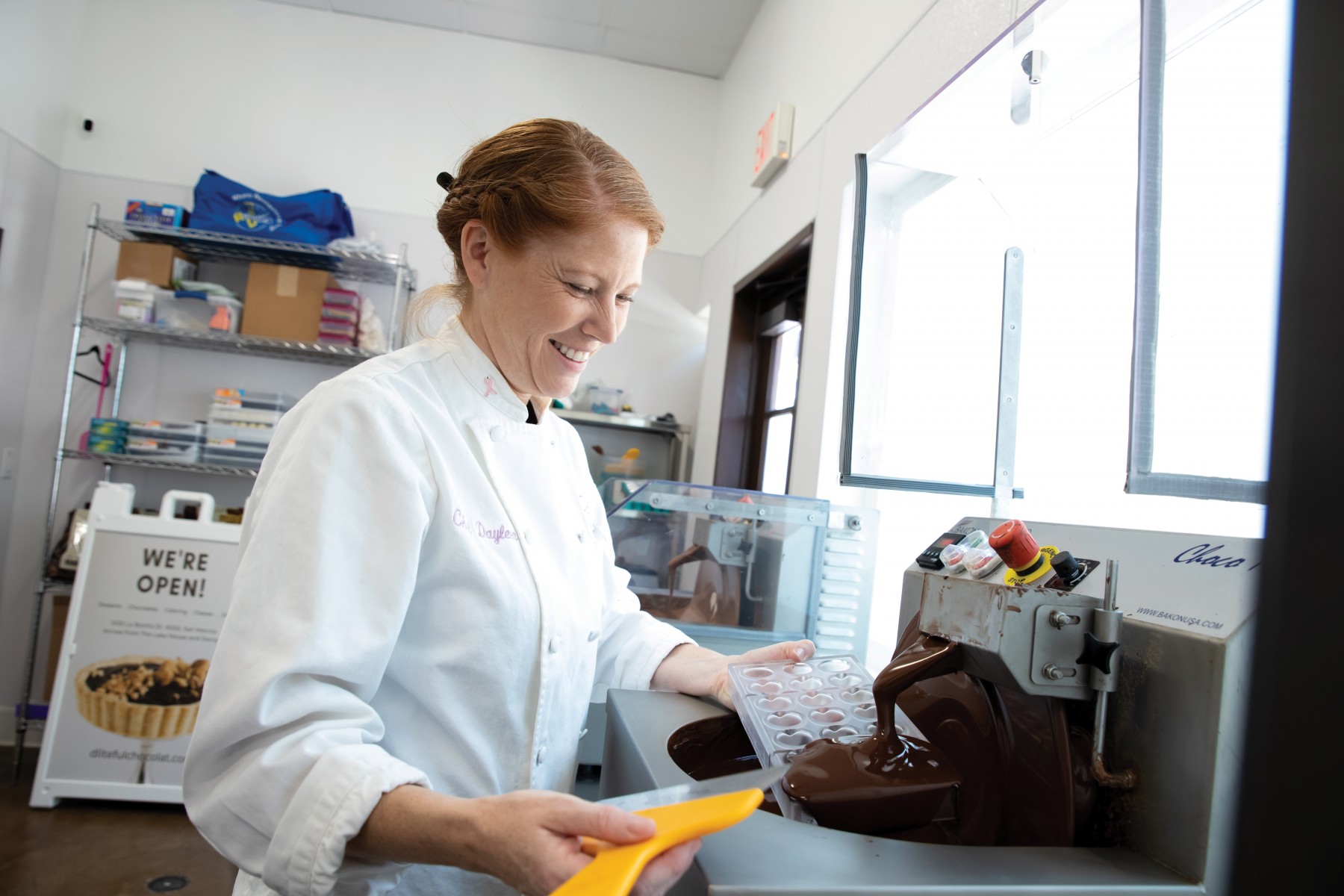 "It’s hard to work with chocolate. It’s not for everyone. But for me, it’s always felt calming and therapeutic," Dayleen Coleman says. Photo by Christine Vaughan

"The program itself was pretty brutal," said Curt Coleman, a software engineer who has worked at Viasat for two decades. "And then trying to balance that with being a mom and getting up to catch an early enough train that she would guarantee she would be there on time. Dayleen was pretty amazing in her ability to multitask on a daily basis, juggling being a mom and doing the student thing."

After the third of three terms, Coleman secured an internship at Côte Brasserie, a French restaurant in Winchester that had the benefit of being considerably closer to home. Initially offered a position in fish and seafood – “I was like, ‘Did you not see my CV?’ ” Coleman joked – she soon undertook the natural transition to pastry chef, making up to 300 desserts per day.

But her true joy (and skill), as she learned in her time at Le Cordon Bleu, was chocolate. Coleman says she remains in touch with most of her cohort from the school, and she’s the only one who has pursued chocolate for a living.

“At the end of a practical exam, I would present what I made after working with chocolate for three hours, and I wouldn’t have a drop on me and I’d have a smile on my face,” she said. “Most of the chefs were wearing chocolate everywhere and grimacing. It’s hard to work with chocolate. It’s not for everyone. But for me, it’s always felt calming and therapeutic.”

Coleman honed her abilities during an eight-month stint at Chocolate Craft, which is a factory built on a farm that dates back centuries. She was mentored by a chocolatier who doubled as a children’s book illustrator and taught Coleman to treat chocolate not just as a delicious treat, but as a piece of art.

Throughout her life-changing English experience – Le Cordon Bleu, the internship, the job at Chocolate Craft – Coleman was taking copious mental notes, knowing that she would incorporate as much as possible into her own business when she moved back to the States.

With D’Liteful Chocolat now in its third year, Coleman works with a team of seven employees, most of whom are cross-trained to handle myriad duties. Her assistant manager and head baker is Callista Rotondo, whom Coleman hired on a trial basis from Nothing Bundt Cakes more than a year ago and who now can make almost as many desserts as her boss can.

Coleman has grand plans for D’Liteful Chocolat. She wants to expand into the space next door when the current owner retires and open a café. She wants to create a series of high-end boutiques in North County that will sell her wares, which still will be produced in the existing kitchen. Farther down the road, she envisions establishing a similar concept in her beloved England.

In the meantime, Coleman will continue to offer a little slice of Europe in a little corner of San Marcos. 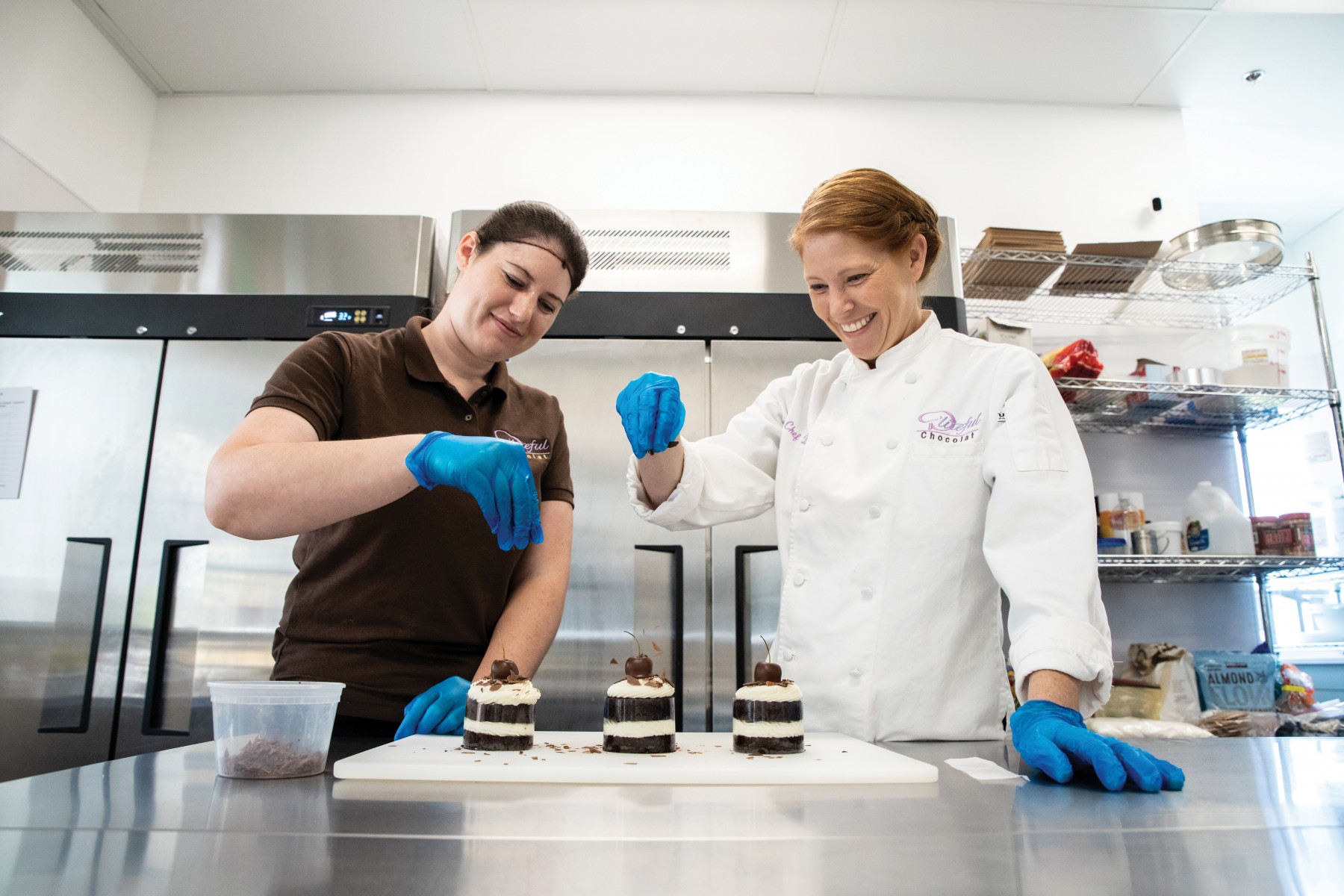