Combining Art with Science to Quench a Thirsty Region 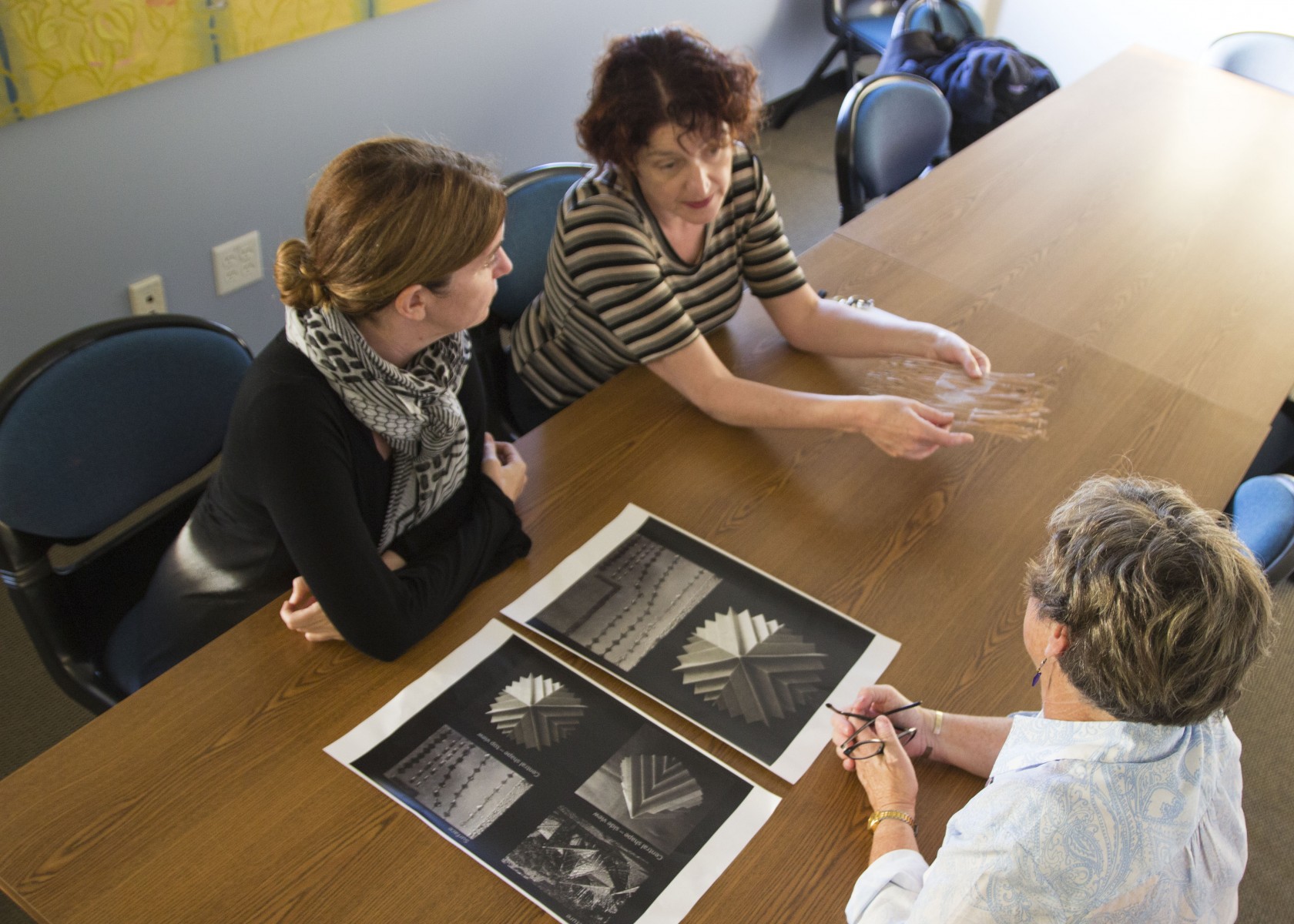 The Dewers
Cal State San Marcos professors Judit Hersko (top right) and Merryl Goldberg (bottom right) have been working on for the past two years, and their efforts will culminate this summer with a test sculpture melding art with science that squeezes moisture from the atmosphere into gallons of potable water daily.

In fact, that’s what Cal State San Marcos professors Judit Hersko and Merryl Goldberg have been working on for the past two years, and their efforts will culminate this summer with a test sculpture melding art with science that squeezes moisture from the atmosphere into gallons of water daily. Their long-term goals include a larger, permanent installation on campus that could perhaps yield enough water to irrigate a garden.

“If we could end up with something that genuinely works and works well, I could imagine a sculpture for multiple settings,” said Goldberg, a professor in the School of Arts at California State University San Marcos and executive director of Center ARTES.

Goldberg and Hersko, who serves as associate director in the School of Arts at CSUSM, have been working on the National Science Foundation-funded project for more than two years. The project—formally known as the San Diego Incubator for Innovation, and hosted by the Balboa Park Cultural Partnership—tasks nine teams from around the region to apply arts-based techniques and STEM skills to one of the region’s most vexing challenges: water and the mismatch between supply and demand. Similar innovation incubators are tackling different subjects in Chicago, Illinois and Worcester, Massachusetts.

“I’m fascinated by the relationship between science and the arts,” Goldberg said. “Scientists and artists really do the same thing in a lot of ways. We just tend to express our findings in a different way. This just sounded like a really cool thing.” 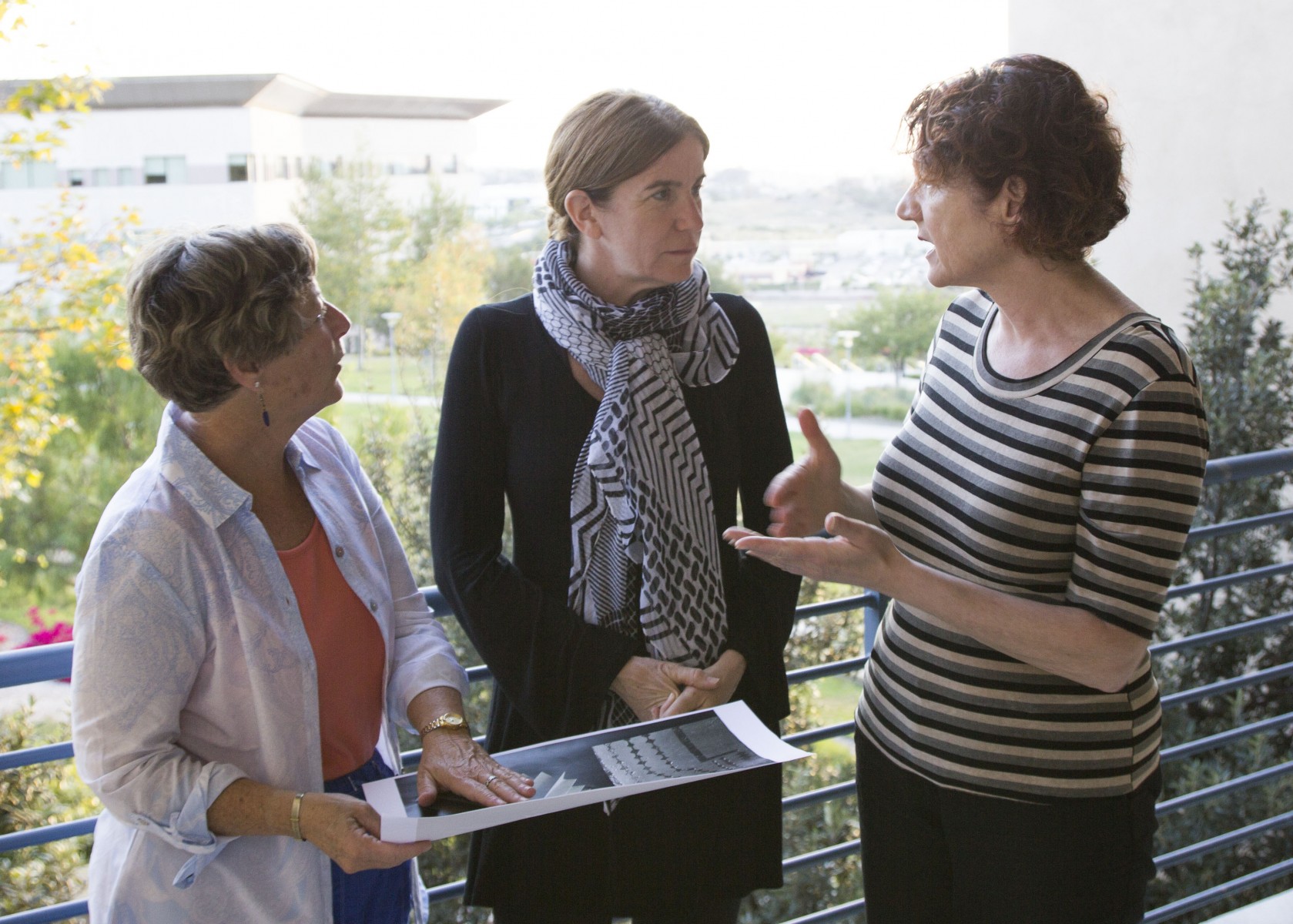 Hersko and Goldberg’s team is dubbed the “Dewers.” It also includes Justin Liu, a UC San Diego material sciences and engineering graduate student, Pamela Moses, a cognitive neuroscientist at San Diego State University, Billy Schmidt, an official with the Children’s Discovery Museum in Escondido, Nancy Reitzler, an art teacher, and Elizabeth Tobias, a multi-disciplinary artist. Team members have spent countless hours on the project and have been meeting weekly for more than a year.

“Our mission as a `Dew Collector’ team is to create visually compelling works of art that combine science and design to explore innovative solutions to problems such as the water shortage in California,” states a grant proposal. “We are starting with a series of bio­inspired sculptural dew collectors that utilize hydrophobic, hydrophilic and heat transfer principles.

“This project presents a new method of generating fresh water, which has not been generally investigated or applied in this region. Our sculptures may be an important step in the awareness of water conservation. They also serve as a functioning unique, accessible and creative contribution to water collection. This work raises awareness about the water shortage by engaging the public with art and science concepts.”

The big test comes this summer when the team hopes to finish a conceptual sculpture that would measure no more than three-by-four feet. Design concepts include origami-inspired geometric shapes to maximize the surface area.

The team also is developing two or three models that will be on exhibit at the Reuben H. Fleet Science Center in Balboa Park this fall.

The technology is not entirely new. In fact, it’s being used with great success in areas of South and Central America, where netting is used to pull water from fog banks. Among the largest expanse of fog catchers is located in Tojquia, Guatemala, where 60 of the contraptions trap up to 1,000 gallons of water a day. Testing done by the Dewers shows the possibility of extracting up to one gallon of water daily per 300 square feet per night under favorable conditions.

torrey_pine_cones.jpg
A close up of Torrey Pine foliage and cones. Source: https://en.wikipedia.org/wiki/File: Torrey_Pine_Cones.jpg
Stenocara Gracilipes
Stenocara gracilipes, also known as the Fogstand Beetle, is a species of beetle that is native to the Namib Desert of southern Africa. This is one of the most arid areas of the world, receiving only 1.4 centimetres (0.55 in) of rain per year. The beetle is able to survive by collecting water on its bumpy back surface from early morning fogs. Photo by: Hans Hillewaert.

“The idea is to extract the invisible water particles that are all around us in the atmosphere, "Hersko said.

There are other benefits, too.

“This not only has the potential for making a difference in how we think about water, but it also provides a wonderful model for teaching and learning from kindergarten through college by using the arts as an effective tool for understanding and solving problems,” Goldberg said.

Combining Art with Science to Quench a Thirsty Region