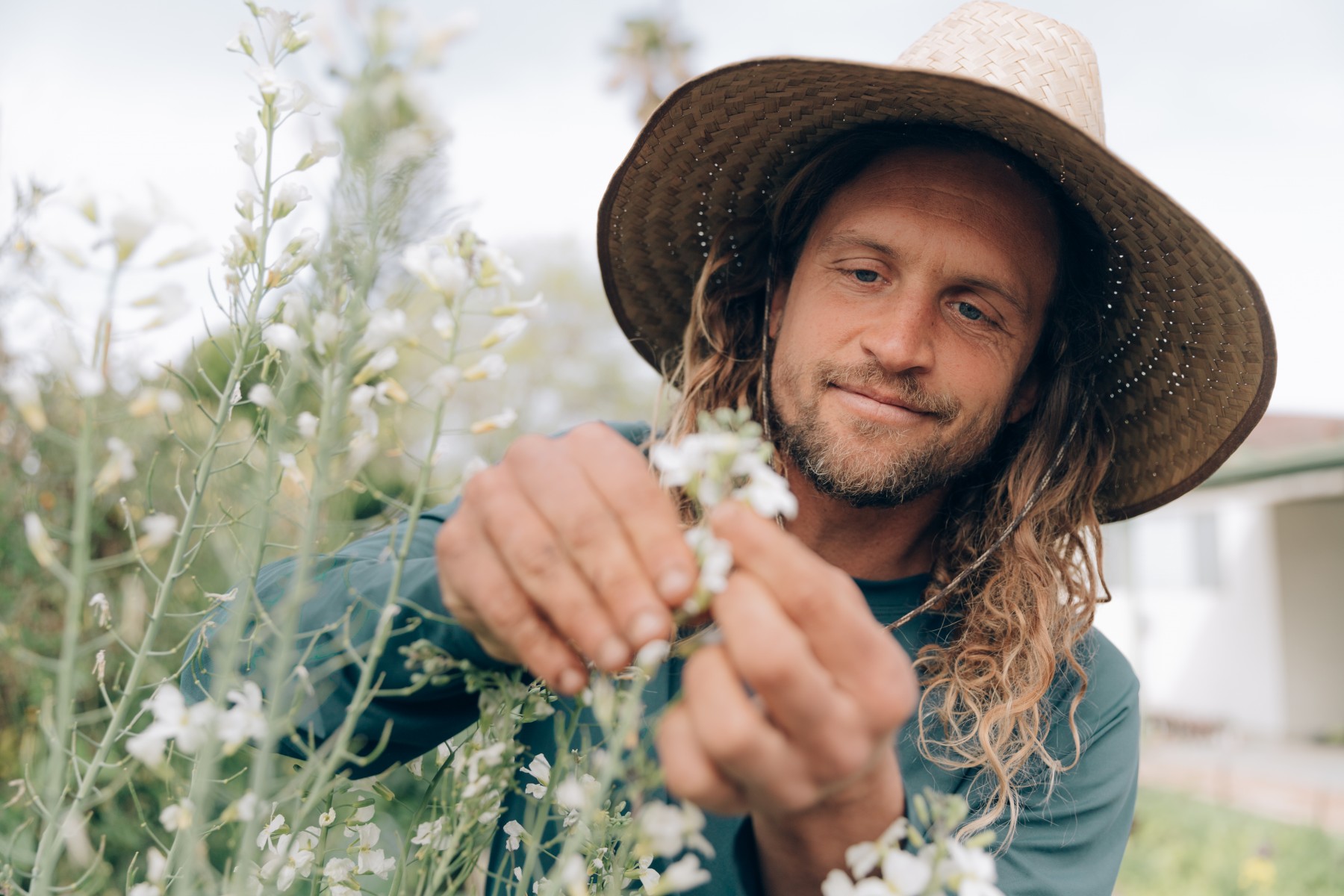 Greg Reese, who earned his bachelor's in business administration, is a regenerative farmer working to fight injustices in the food system by growing healthy produce for people who otherwise might not have access. Photo by Leia Vita Marasovich / @leia_vita

Greg Reese loved the outdoors as a kid growing up in Orange County. It didn’t matter if it was the beach, camping or the river. And when he wasn’t enjoying nature, he was busy playing soccer, including two seasons for Cal State San Marcos after transferring from Orange Coast College in 2007.

But it’s safe to say Reese never once imagined that all those hours spent outdoors would lead to what has become his passion.

“I remember there was one farm still in my neighborhood growing up that had cows and little sheep and chickens,” Reese said, “but I never thought I was going to be farming growing up. It just kind of happened after I was 30.”

Today, Reese is a regenerative farmer working to fight injustices in the food system by growing healthy produce for people who otherwise might not have access.

Reese is a co-founder of Encinitas-based nonprofit Sea + Soil, which aims to “reconnect and regenerate ecosystems and community.” Among the programs under the Sea + Soil umbrella is 1000 Tiny Farms, which Reese pioneered to help explore how small patches of land could have a positive social, environmental and economic impact.

Reese’s interest in healthy food began while he was working at Stone Brewing in Escondido. He ate a salad there that proved life-changing.

“I never felt so good after eating a salad,” he said. “It was noticeably energizing. And they sourced from a local farm in Escondido at the time. It was just so fresh. When I played soccer at Cal State San Marcos, I noticed that when I was eating fresher vegetables, I just felt good and I had more energy. Before that it was mostly meat and carbs. When I started incorporating fresh veggies, it was a game-changer.”

Contributing to the greater good is part of Reese’s DNA, and he spent time working in solar energy and water reclamation before focusing his efforts on farming. He worked with the Worldwide Opportunities on Organic Farms, which helps “build a global community conscious of ecological farming and sustainability practices.”

While some may be surprised to learn that Reese earned his degree in business administration with an emphasis in marketing, he says his CSUSM education plays a role in his work every day, from manufacturing to distribution to marketing. In fact, Reese hopes to partner with his alma mater on many aspects of farming. He has thriving farms in Cardiff and Valley Center that can always use volunteers to assist with the physical aspects, but he said there also is a need for expertise with the scientific aspects of farming, including soil testing, identifying biological organisms in the soil, plant tissue analysis, and more.