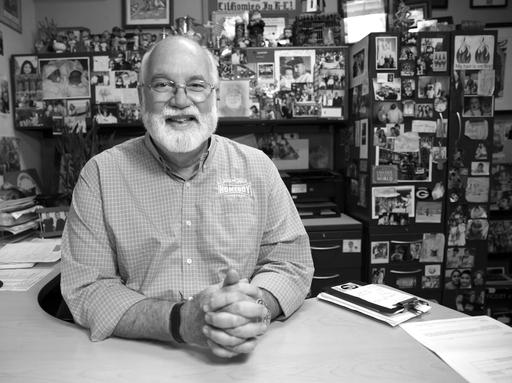 Gregory Boyle
The Jesuit priest is the founder of Homeboy Industries, the world's largest gang-intervention program.

Gregory Boyle, a Jesuit priest who founded Homeboy Industries, the largest gang-intervention program in the world, will speak at Cal State San Marcos on March 27 as part of the university’s Arts & Lectures series.

Boyle will speak about his 2017 book “Barking to the Choir: The Power of Radical Kinship,” a reflection on what working with gang members in Los Angeles has taught him about faith, compassion and the enduring power of kinship. The book is a follow-up to his 2010 New York Times bestseller “Tattoos on the Heart: The Power of Boundless Compassion,” in which he introduced readers to Homeboy Industries, the nonprofit organization he started in 1992 in the wake of the L.A. riots. It has grown into the biggest and most successful gang rehabilitation and re-entry program in the world, supporting about 10,000 people per year.

Boyle has received numerous accolades for his work with Homeboy Industries and on behalf of former gang members, including the California Peace Prize by the California Wellness Foundation, the Civic Medal of Honor from the Los Angeles Chamber of Commerce and the James Irvine Foundation’s Leadership Award. He’s also a member of the California Hall of Fame, inducted in 2012 as part of a group that included Buzz Aldrin, the Beach Boys and Magic Johnson. In 2014, the White House named Boyle one of its Champions of Change.

All attendees must purchase or reserve tickets online via the Arts & Lectures website.

Ling’s appearance is the fourth of sixth Arts & Lectures events scheduled for this spring at CSUSM.

What: “Barking to the Choir: The Power of Radical Kinship” with Fr. Gregory Boyle as part of Cal State San Marcos’ Arts & Lectures series

The university enrolls 17,000 students. With approximately 2,000 employees, the institution is a Great College to Work For® (The Chronicle of Higher Education). As a recipient of the annual HEED Award since 2014—a national honor recognizing U.S. colleges and universities that demonstrate an outstanding commitment to diversity and inclusion—CSUSM is committed to creating a diverse and inclusive environment.