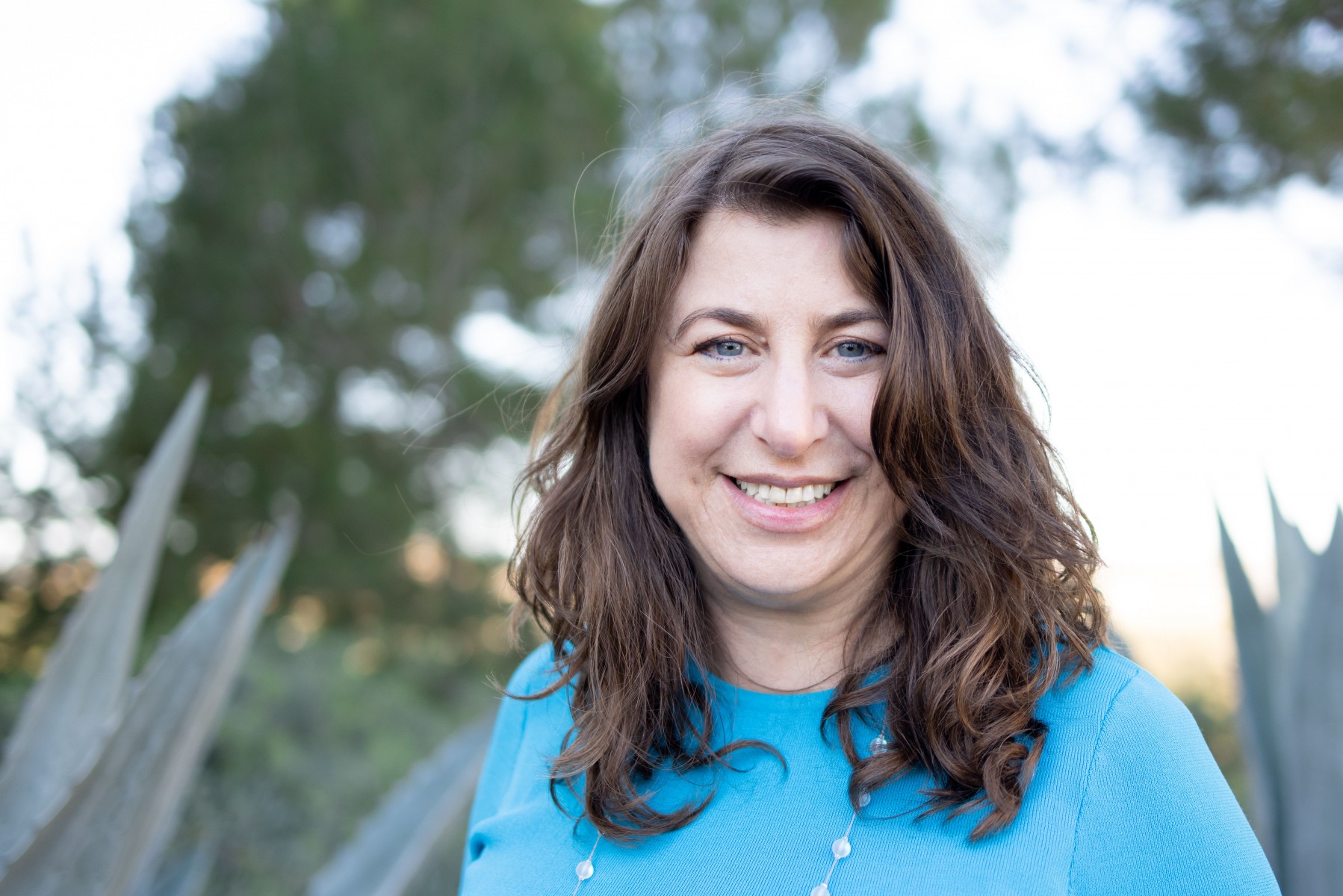 It’s difficult for Kasandra Balsis to count the ways that Cal State San Marcos history professor Alyssa Goldstein Sepinwall has helped her in her academic journey.

When Balsis entered CSUSM’s history master’s program in the fall of 2020, the virtual format made it challenging for her to find her way, but Sepinwall aided the transition by using Zoom breakout rooms to facilitate deeper discussion and incorporating guest speakers to enhance the curriculum.

When it came time for Balsis to choose a thesis topic, she not only was inspired by Sepinwall’s course on Haitian history, but she received hands-on direction from Sepinwall in developing her initial sparks of ideas into thoroughly researched arguments.

And when Balsis was invited to participate in a California State University student research competition last spring, Sepinwall helped her confront her fear of public speaking. The professor devoted hours of her personal time to assist Balsis in revising her submission and met with Balsis to rehearse and fine-tune her presentation.

“I placed first in my session and was named a finalist for the CSU statewide competition, and it was the greatest feeling of joy in accomplishing something that I had previously thought to be impossible,” Balsis said. “Since that moment, I have participated in several other oral presentations, including serving as a panelist for a graduate history symposium at Fresno State.

“These examples only scratch the surface of the extent to which Dr. Sepinwall has facilitated the academic growth of CSUSM students and beyond.”

Sepinwall has been supporting the educational and personal growth of her students since arriving at CSUSM in 1999, and along the way she has won the university’s top teaching awards – the President’s Award for Innovation in Teaching in 2004 and the Brakebill Distinguished Professor Award for overall excellence in 2014.

Now Sepinwall has won a prize at a higher level. On Tuesday, she was honored with the CSU Wang Family Excellence Award, which annually recognizes four CSU faculty members and one staff member who have distinguished themselves through exemplary contributions and achievements. Sepinwall received the Outstanding Faculty Teaching Award at the CSU Board of Trustees meeting in Long Beach, becoming the fifth CSUSM faculty member to win a Wang award since it was instituted in 1998.

“I love getting to know my students and helping them toward ‘aha’ moments, when they realize how history connects to their lives,” Sepinwall said. “I love bringing them information from the cutting edge of my field, where I publish on topics from the history of racism to historical video games. My classes challenge conventional expectations about history, recovering stories that have been pushed to the margins and allowing students to see themselves in historical narratives.” 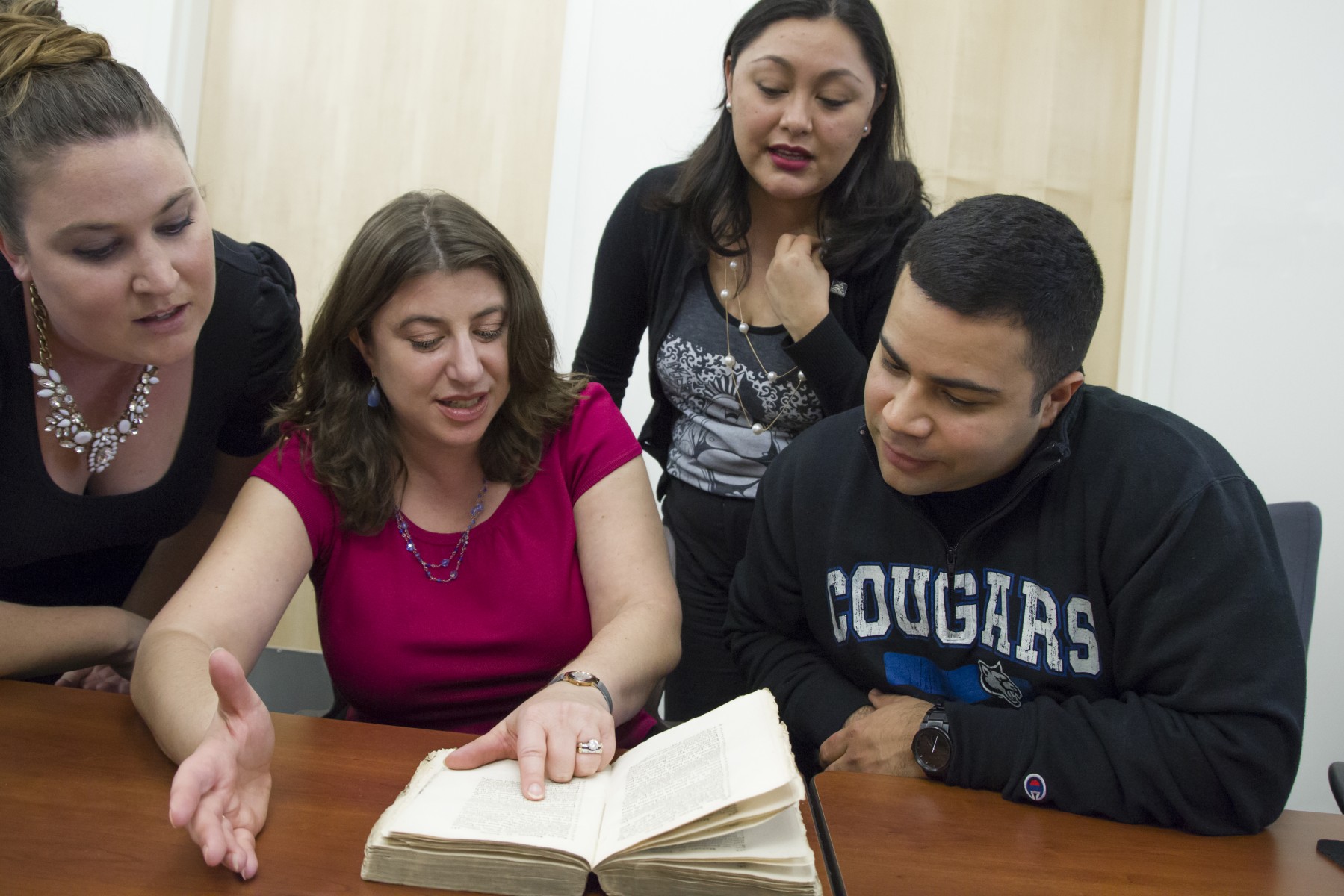 In this 2015 file photo, Alyssa Sepinwall shares an old French artifact with her graduate students.

Sepinwall is well known across campus for her creative and innovative approaches to teaching. She has held  cookoffs to explore changes in eating habits for her course Women and Jewish History and gamified the French Revolution for the class Revolutionary Europe. She incorporates firsthand historical accounts like diaries, plans surprise “field trips” to campus locations such as the White Rose Memorial (which commemorates German students killed for resisting Adolf Hitler) and invites diverse guest speakers like Holocaust survivors and recent refugees. Her research on topics including the history of gender discrimination in France and early Haitian intellectuals became the foundation for a host of new courses.

Sepinwall extends her passion for history and teaching beyond the classroom, too, as she has organized more than 30 special lecture, performance and film events for students and the community; given more than 30 guest lectures and panel presentations for campus colleagues; and done more than 50 community talks, including a live interview with famed Holocaust survivor Elie Wiesel.

Sometimes interactions with students end up informing her research. After students expressed interest in the subject of depictions of history in video games, Sepinwall became one of the first historians to write about it, and that work eventually became the basis for her 2021 book “Slave Revolt on Screen: The Haitian Revolution in Film and Video Games.”

When COVID-19 disrupted her tried-and-true approach to teaching in 2020, Sepinwall experimented and refined. One of her pandemic assignments was called “Teach Your Family” and involved students teaching family members or friends about course content. As an example, a Black Marine veteran taught his wife and children about the neglected history of Haiti and its importance for African-Americans.

“I realized that rather than add tech bells and whistles, doubling down on building connections with students would be even more important in a virtual environment than in a classroom,” Sepinwall said. “I learned also that the more students felt connected to each other and to me, the more they would interact online and succeed in the course.”

Sepinwall’s classes are back in person this fall, but regardless of the forum, she remains as committed as ever to keep illuminating the past and present for her students.

“I love to bring history alive for students and build critical thinking skills that help them be successful, no matter their career,” she said. “When students understand history as lived experience rather than as a dry subject based on names and dates, then I feel like I’ve done my job.”