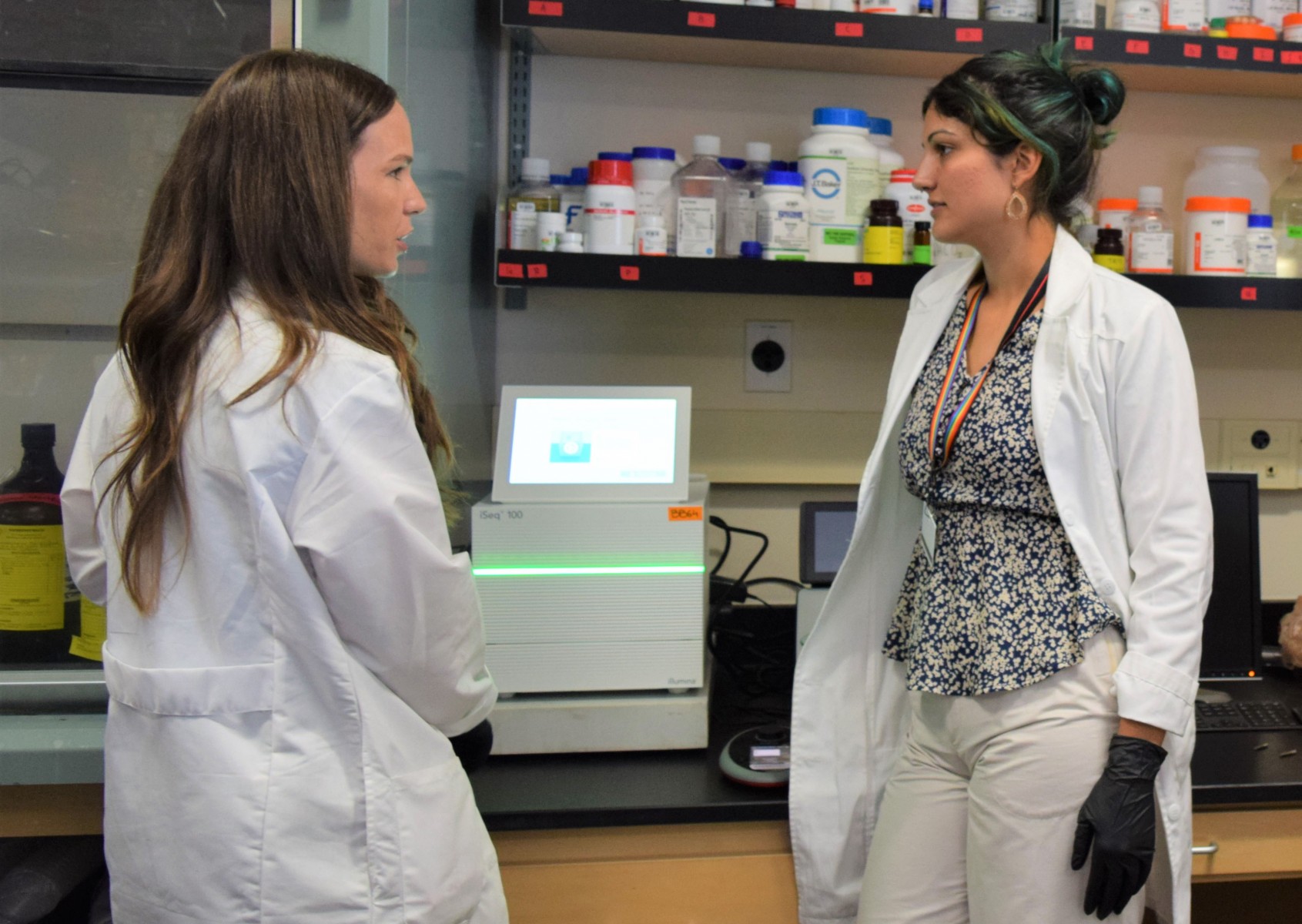 Ciara Sanders (right) is pictured in the lab of biology professor Elinne Becket. Sanders used her experience as a master's student in Summer Scholars as a springboard to a Ph.D. program at Princeton, which she is starting this fall.

Even though she was armed with a bachelor’s degree, when Ciara Sanders began a master’s program in biological sciences at Cal State San Marcos in 2020, she was accompanied by the same nagging questions that afflict many underrepresented students in STEM fields.

Do I belong here? Is this really for me?

That self-doubt started to dissipate as Sanders became enmeshed in the lab of biology professor Elinne Becket, doing research on the impact of antibiotic pollution of coastal microbiomes. And it was all but chased away last year when she was chosen as a peer mentor in Summer Scholars, a 10-week program that prepares students for graduate school and careers in STEM through hands-on research and networking opportunities.

“Summer Scholars really impacted my development as a scientist,” Sanders said. “It exposed me to the collaborative nature of research, and I realized what was missing in my graduate school experience – human interaction. I’ve gained a lot of confidence since doing the program.”

So much confidence that she decided to pursue a doctorate. This fall, she will begin a Ph.D. program in molecular biology at Princeton University.

Sanders’ story of success is exceptional, and yet it’s illustrative of the impact that Summers Scholars has been having on students for more than a decade. Now, the program’s reach will be even broader and deeper.

CSUSM has received a $110,250 grant from Hologic, a Massachusetts-based global medical technology company that has a major presence in San Diego, to launch the Hologic Pathway to Success in STEM. The new program will expand Summer Scholars to serve STEM students throughout their college path, from their first year to graduation.

The pathway program is building upon Summer Scholars in three ways. First, it provides rising sophomores who are first-generation college students, low income, from underrepresented groups in STEM or academically struggling with exposure to Summer Scholars programming, lab shadowing and peer mentorship.

Second, the Hologic Pathway to Success in STEM supports six current Summer Scholars (who are anywhere between their sophomore and senior year) and five graduate-level peer mentors to do research and receive career development and professional mentoring.

Third, it’s sponsoring three high-achieving Summer Scholars to continue their research into the fall and spring semesters, turning a seasonal program into a year-round one.

“When we track our students and we look at the alumni, we see the success that they have from being in Summer Scholars,” Jameson said. “So having the ability to support this many students in this large of a wraparound program, I know what it will do for them and I know it will change their lives. And that is extremely rewarding to see happen.”

CSUSM first approached Hologic about supporting Summer Scholars two years ago, and the company heartily consented because it has a strong focus on increasing representation of underrepresented minorities in STEM (61% of STEM majors at CSUSM are from such groups). Hologic broadened its funding last year to include the peer mentoring piece that Sanders participated in.

What would you do if money weren’t a limitation, if you could dream about doing something really special?

The CSUSM team drew up a proposal, which became the Hologic Pathway to Success in STEM.

“I’ve been with the company for 23 years, and I’ve stayed for so long because here we have the chance to dream about how we can use science and engineering to help patients in the most effective way,” Getman said. “As scientists and engineers, it’s a rare privilege and honor to have that opportunity, and we want to afford that opportunity to all students from every walk of life who aspire to do something great, something that is bigger than themselves. We recognized years ago that the faculty and staff at CSUSM shared that vision with us; we are kindred spirits in a sense. We can’t wait to see how the young scholars in the program exceed their own expectations.”

“We've seen students who really didn't think that they belonged in the STEM field become Ph.D. candidates,” she said. “We've seen them go into industry and become leaders. Watching our students come and give back to our programs, it shows how much it means to them. The growth and development is, for me, the most rewarding aspect of this program.”

For Sinem Siyahhan, change is an opportunity to challenge ourselves to reach new heights.When the associate professor of educational technology and learning sciences came to Cal State San Marcos in …
Read more

When most college students earn a scholarship, the money goes toward helping offset the price of attending school.For David Falconer, it quite simply changed his life.“It means everything,” said …
Read more