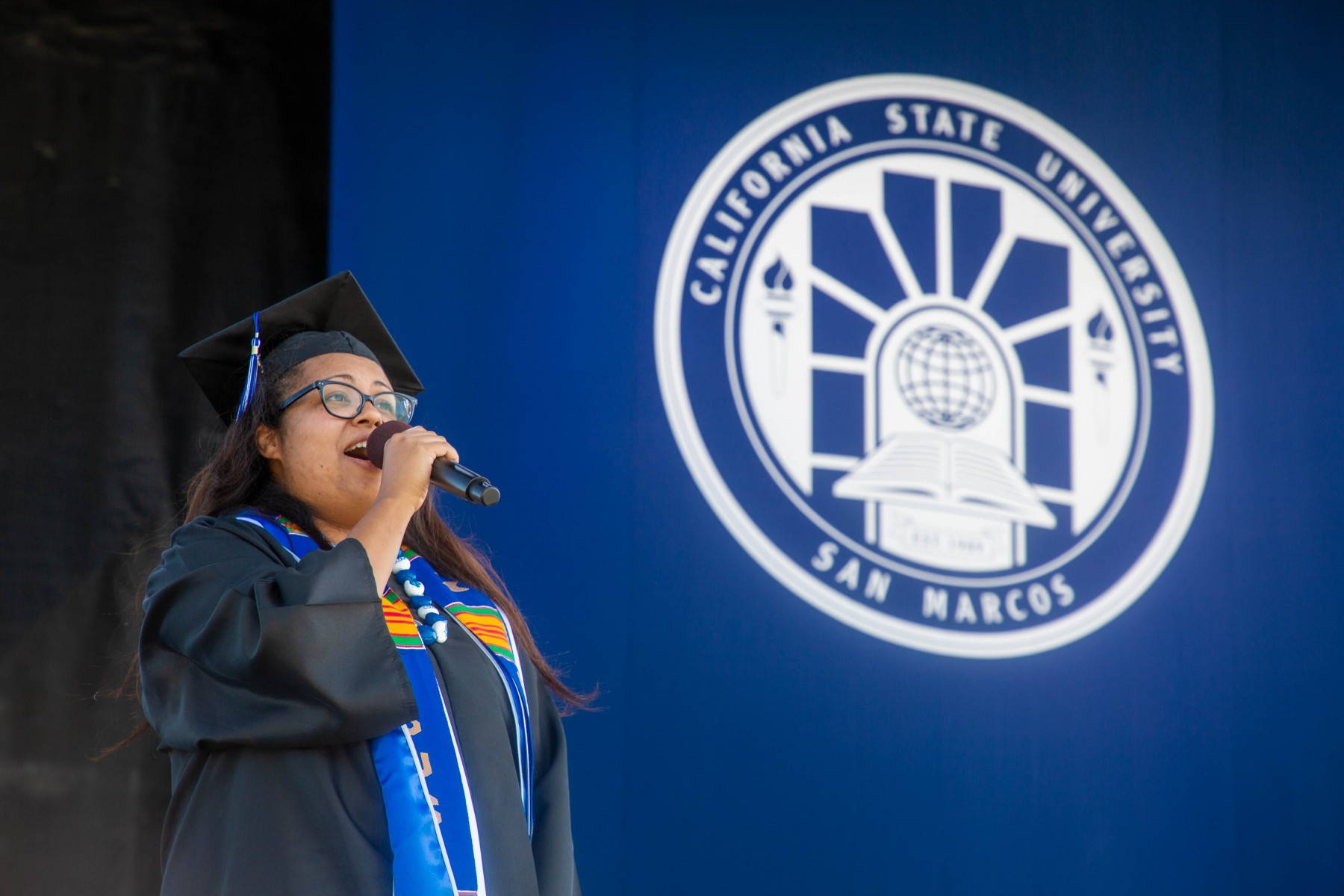 Rachael Groeneweg, who graduated in May with a music degree, sang "America the Beautiful" at three of CSUSM's five commencement ceremonies. Photo by Kim Peirce

For most graduating students, receiving the opportunity to sing at their university’s commencement would be the performative highlight of the year, if not many years.

For Rachael Groeneweg, it was merely the kickoff for what will surely be a summer to remember for the rest of her life.

Groeneweg, who graduated from Cal State San Marcos last month with a degree in music, sang “America the Beautiful” at three of the university’s five commencement ceremonies. But before that, she was selected by Fox 5 San Diego following an extensive regional search to sing the national anthem during the telecast of the annual Big Bay Boom fireworks show on July 4 on San Diego Bay.

Big Bay Boom is the largest fireworks show in California, and the television audience stretches from San Diego to Sacramento. So even though Groeneweg has sung the national anthem at a few dozen events over the years, this will be her most significant assignment yet.

“It’s a very big audience, and this is a big deal to me,” Groeneweg said. “Starting with graduation, it’s been a whirlwind, an awesome experience, and I feel honored and humbled and grateful.”

Fox 5 originally was seeking a teacher to sing the national anthem as a tribute to the role that educators have played during the COVID-19 pandemic. The producers who conducted the search, however, were swayed by both Groeneweg’s vocal talent and her personal story.

The broad outline is that she’s a military wife who’s married to a staff sergeant in the Marines, and that her adoptive mother is a high school choir teacher. That checks two big boxes for the TV station. But the deeper contours of Groeneweg’s background are even more compelling.

She was born and raised in Poway, and her parents divorced when she was 7. When her father left the picture, Groeneweg was stuck with a mother who was physically and emotionally abusive. Always possessing of a dynamic singing voice, she found refuge in youth theater through her church and other community organizations.

Groeneweg didn’t tell anyone about the tribulations she was experiencing at home until her sophomore year at Mt. Carmel High School. As a freshman, she had met Marti Martinez, the longtime choir director at the school whose eyebrows were raised when the precocious teen boldly declared that perhaps she was too good for beginner choir, the placement for all first-year students.

“She’ll say, ‘That’s when I knew I loved her,’ ” Groeneweg said. “We just clicked right away.”

Martinez learned that Groeneweg lived a block away, and since her mother was disinclined to take her to school, Martinez began driving her to Mt. Carmel most mornings. She also cast Groeneweg in the major role of Fantine in the school’s production of “Les Misérables” – she was the only sophomore who earned a part – only to be dismayed when the student regularly missed school and, by extension, rehearsals.

When Martinez finally confronted her about her absences and its effect on the musical, Groeneweg broke down – and opened up.

“I was shocked,” Martinez said. “I knew her mom wasn’t the best mom, but I didn’t know she was abusive.”

Martinez called Child Protective Services, which sent officials to interview Groeneweg, but because she was an older child and had other places to live via friends in youth theater, CPS didn’t consider it an emergency case and thus didn’t remove her from her home. Martinez managed to pull off the delicate trick of convincing Groeneweg’s mother that Rachael would be better off living elsewhere, though Martinez’s own house wasn’t an option because she already had three older sons.

Over the next several years, Groeneweg’s mother was arrested twice – the first time on four counts of grand theft and then, after her daughter’s high school graduation, for stealing Rachael’s identity in connection with credit cards. Groeneweg has cut off all ties with her mother and doesn’t even know where she lives.

Martinez never officially adopted Groeneweg, but for years they have called themselves mom and daughter.

“Even though I didn’t live with her, she’s always been my guardian angel,” Groeneweg said. “We’ve had a bond since the day we met. It’s been mom and family ever since.”

Because she has been financially independent since she was 17, Groeneweg didn’t have the typical college experience. After high school, she attended a series of community colleges to earn music credits while holding down jobs to pay her rent and put food on the table. She got a certificate in graphic design from CSUSM Extended Learning and has been working for years as an independent contractor for Mt. Carmel, designing choir posters and programs and doing assorted administrative tasks.

It wasn’t until Groeneweg married her husband, Tymon, four years ago that she was able to fully commit to education. She enrolled at CSUSM in fall 2019 and graduated with her music degree two years later, with more than half that time remote as she moved to Fresno when Tymon was assigned duty as a Marines recruiter. She intended to pursue a master’s in vocal performance at Fresno State, but she’s expecting her first child – a boy due in November – so that plan is on hold.

Groeneweg had a short but impactful stint at CSUSM. Last fall, she was invited by music professor Mtafiti Imara to participate in the pilot of an exchange program, through the Office of Inclusive Excellence, between CSUSM and historically Black colleges and universities. Designed to be held in person, the program went virtual because of the pandemic, and Groeneweg was mentored by Malesha Taylor, a voice teacher at Clark Atlanta University who’s also a lecturer for CSUSM.

Working with Taylor as well as longtime music professor Merryl Goldberg, Groeneweg completed a project on protest songs that involved a research paper and an original composition. The song, the first one she has created from scratch, is titled “You Is (Kind, Smart, Important),” and it’s inspired by a line spoken by a Black maid to a white girl in the 2011 Oscar-nominated film “The Help.”

On the strength of that effort, Groeneweg was a finalist in the CSUSM Symposium on Student Research, Innovation and Creative Activities, and she advanced to the CSU statewide competition. She also was named the 2021 Scholarship and Creative Works Champion by the College of Humanities, Arts, Behavioral and Social Sciences.

“I feel honored to have had the opportunity to work with Rachael,” Goldberg said. “She is so talented, inspiring, reflective, profound, provocative and empathetic. She is already making a difference in the world. One day, when she’s super famous, I’ll be able to say proudly, ‘I know her!’ ”

Groeneweg is less interested in fame than in returning to her roots. She aspires to earn a teaching credential in music and take over the Mt. Carmel choir program from Martinez when the latter retires in four years.

“I’m really excited to have someone to leave my program to and know it will be in good hands,” Martinez said. “If I could do it tomorrow, I would.”

That’s for down the road. This month is all about preparing for Big Bay Boom. Groeneweg already sat with Martinez for a Fox 5 interview in the Mt. Carmel choir room. She visited a Mission Valley recording studio to lay down the national anthem vocals (“I made the owner cry,” she says proudly). She had a wardrobe consultation and a hair and makeup session. And, most memorably, she boarded the Star of India on a beautiful San Diego night, with tourists on the Embarcadero gawking, to pre-record “The Star-Spangled Banner.”

Groeneweg has sung the anthem dozens of times. But it never has been like this.

“I’m always emotional when I do it, especially being a military wife,” she said. “But filming it on the deck of the Star of India, seeing how we’ve come together as a community, what’s possible in a year’s time, I definitely felt it more than usual. And not only where we’ve gotten as a country, but also myself. If you had told senior-in-high-school Rachael she’d be singing on TV, she probably would have laughed in your face.”