A True Trailblazer: Leadership a Key to Campaign's Success 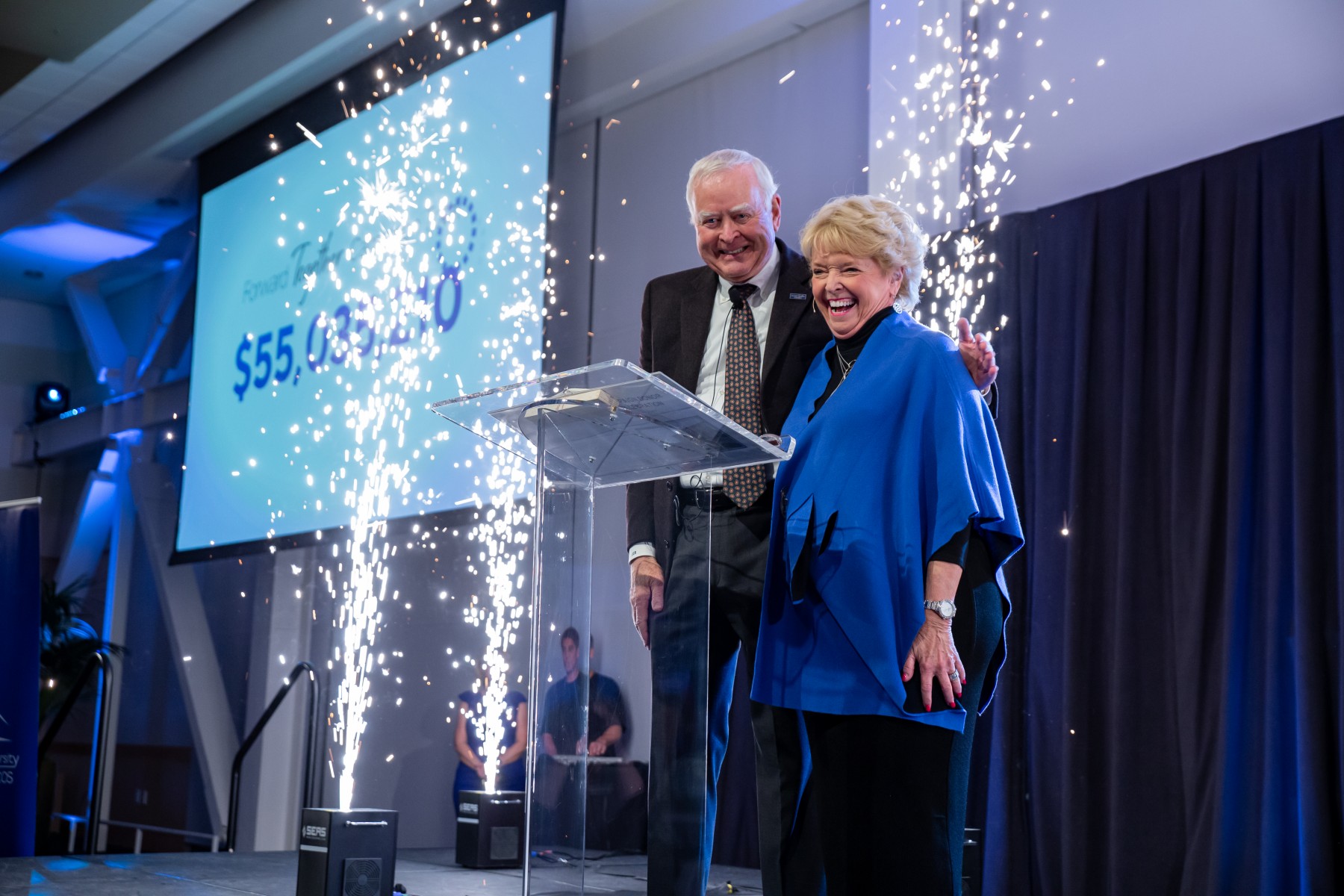 Forward Together
CSUSM President Karen Haynes and Foundation Board Chair Jack Raymond celebrate during a January donor event to mark the university's successful completion of its first comprehensive fundraising campaign.

When the quiet phase of Forward Together was launched in 2012, Raymond wondered if the $50 million campaign goal might be a stretch for such a young University. But Raymond, a longtime supporter of CSUSM and chair of its Foundation Board, didn’t view that as a negative.

“There’s nothing wrong with stretch goals,” he said.

Plus, he knew CSUSM had a unique advantage – President Karen Haynes.

“Karen is the person who has made the sea change in the University,” Raymond said.

When the Foundation Board was determining the campaign goal in 2012, someone suggested $25 million to coincide with the university’s 25th anniversary in 2015. Haynes, never one to shy away from bold goals, responded, “Why not $50 million?”

When the clock struck midnight on New Year’s Eve, it signaled the close of CSUSM’s campaign. The University didn’t just meet its ambitious $50 million goal, it crushed it. The campaign raised more than $55 million, funds that will help CSUSM continue to prepare tomorrow’s leaders, build great communities and solve critical issues for years to come.

Dan Epstein, who provided the gift that pushed CSUSM over the $50 million threshold, said Haynes’ leadership was critical in making the campaign a success.

“She was the driving force, and people got involved because of her,” said Epstein, who gave multiple gifts throughout the campaign, including $1 million that is allowing for a much-needed expansion of CSUSM’s Veterans Center.

“She’s been able to reach out to so many people in the community and gotten people behind the University’s mission, which is very clear – it is providing access to higher education for people who might not otherwise attend college.”

Seeing CSUSM work to expand access for underrepresented students resonated with numerous donors, and they credited Haynes for making that one of her primary goals upon her appointment as president in 2004.

“President Haynes has always struck me as a gracious and thoughtful leader, clear in her intent to serve the community, provide opportunities to students who may not otherwise have such access to education, and support the development of the ‘whole person,’ ” said Emilie Hersh, who serves on the Foundation Board and is an Executive in Residence for the College of Business Administration.

“Karen Haynes has provided the leadership that put CSUSM on the map."

Julie Pardee first met Haynes and Jim Mickelson, Haynes’ husband and founder of CSUSM’s ACE Scholars Services, about a decade ago. Impressed by the education her son, Chris, and his wife, Natalie, received at CSUSM, Pardee wanted to help other students.

The Pardee Foundation Scholarship annually provides 50 awards of $2,000 to CSUSM students who show financial need and have a minimum 3.25 grade-point average. They later added a yearly gift to ACE, which supports former foster youth.

“Karen and Jim inspired us, and we’ve been thrilled to watch it continue to benefit the students who have received these benefits for over 10 years,” Pardee said. “Each year we receive personal letters from the recipients and are blessed by each one.

“Karen has grown CSUSM in creative and innovative ways. It’s been an honor to be part of her inspiring ways.”

The University’s growth was another common element that donors highlighted in describing the importance of Haynes’ leadership.

Ann Hunter-Welborn, another longtime supporter and a member of the University Council before CSUSM was founded, has seen the University’s growth from the beginning.

“For years, people referred to the three major universities in San Diego County,” Hunter-Welborn said. “I can’t tell you how many times I corrected people – ‘There are four!’ That correction is no longer necessary.

“Karen Haynes has provided the leadership that put CSUSM on the map. The University is firmly a part of the San Diego community, recognized for its offering of a sound education, for its contributions to the social fabric, and for its participation with the business community. Dr. Haynes’ enthusiasm is infectious, her wisdom is unbounded, and her drive for excellence is apparent in everything she does.”

It’s a sentiment echoed by Christy Wilson, the executive director of the Rancho Santa Fe Foundation.

Haynes’ tenure as CSUSM president will end on June 30 when she retires. While the campaign may have ended, its success will leave a long-lasting legacy thanks in large part to Haynes’ leadership.

“She’s one of the most impactful presidents of an academic institution that I have ever known,” said Ruth Westreich, a longtime supporter of numerous CSUSM initiatives. “Her impact will live on.”

A True Trailblazer: Leadership a Key to Campaign's Success