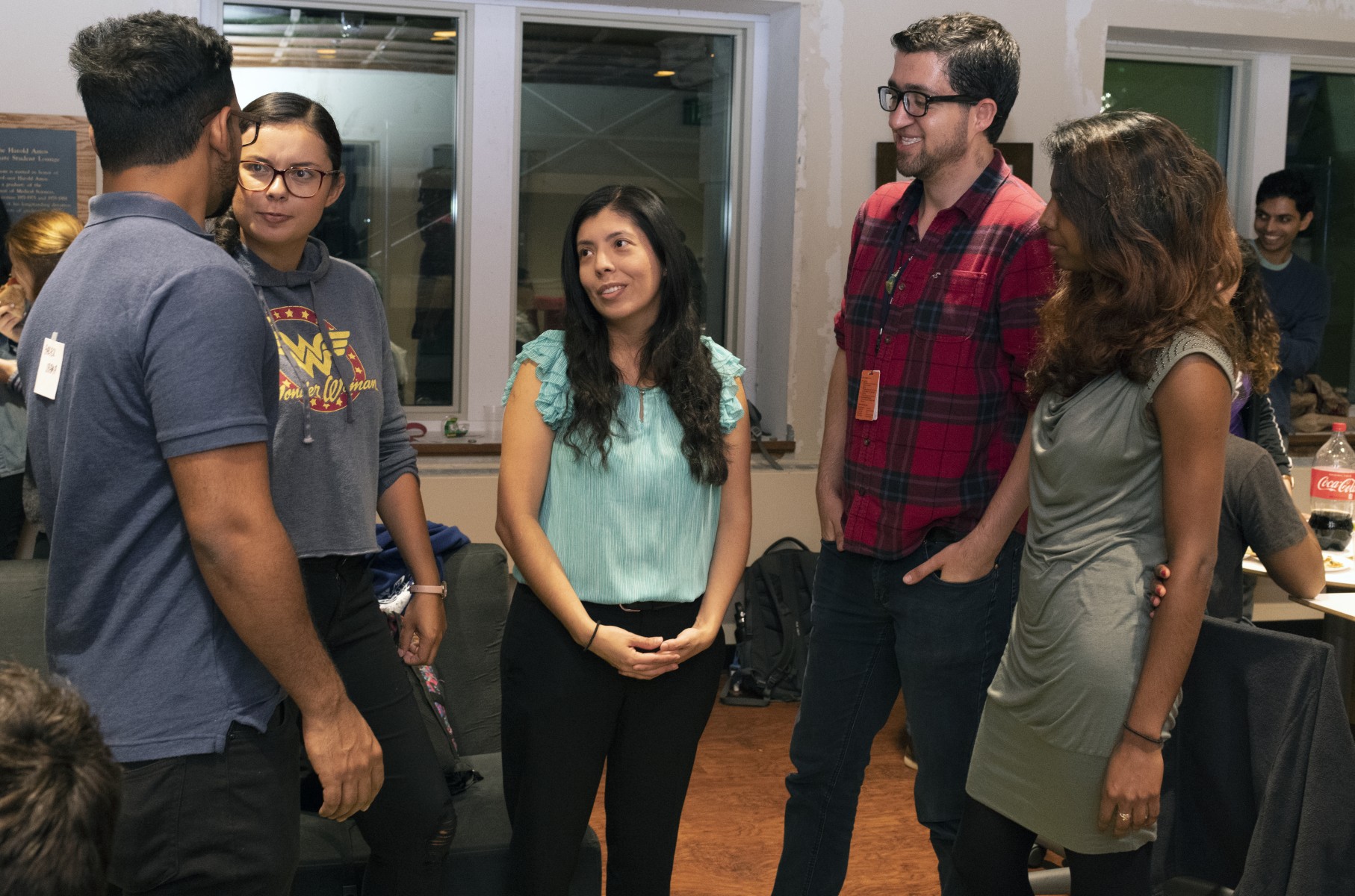 Karina Gonzalez Herrera
The CSUSM alumna interacts with students at Harvard, where she earned her Ph.D. and where she now works. Photo by Molly Akin

Karina Gonzalez Herrera is returning to Cal State San Marcos this month. She will catch up with old friends from the College Assistance Migrant Program who helped her make a smooth transition to college. She will reunite with professors who guided her on the path to bachelor’s and master’s degrees in science at her alma mater.

And, in her current job as the assistant director of diversity and minority affairs for the Division of Medical Sciences and the Graduate School of Arts and Sciences at Harvard University, Gonzalez also will conduct some business -- continuing her outreach to try to convince students from underrepresented backgrounds to pursue careers in STEM and to dream big in their academic ambition.

To be sure, Gonzalez has a compelling tale to tell. The daughter of parents who sought asylum from violence-stricken Guatemala when she was a girl, she overcame undocumented status to make it to CSUSM, attained a master’s after facing deportation proceedings, and went on to earn a Ph.D. in biology at Harvard, perhaps the most prestigious institution of higher learning in America.

“She’s a walking, talking billboard for student success,” said Minerva Gonzalez, the director of CAMP at Cal State San Marcos and one of Karina’s first mentors when she arrived at the University in 2004. “Her story is so powerful. She has fulfilled her destiny. She knows the impact of being out there and talking to students.”

Gonzalez was only 11 when her family left Guatemala, which was embroiled in a brutal, decades-long civil war. She recalls a bus trip into the city with her mother and younger brother during which a man tried to kidnap her brother – essentially rip him from his mother’s arms – in full public view.

“I grew up knowing a lot of violence, knowing that it wasn’t a safe place and I couldn’t go out alone because someone could kidnap me,” Gonzalez said. “I was overprotected because it was such a violent place.”

After receiving death threats, her parents applied for asylum and moved in with Gonzalez’s aunt in San Marcos – two families of five squeezed into a one-bedroom apartment. Her father found work in landscaping.

Gonzalez didn’t speak any English when she entered sixth grade at Woodland Park Middle School. She taught herself the language by copying words from children’s books onto flash cards, then entering the words into her mother’s translator device. For seventh and eighth grades, she switched to San Marcos Middle School, where she learned about and was accepted into the AVID (Advancement Via Individual Determination) college readiness program.

“That caught my interest because my parents were always talking about education,” Gonzalez said.

Her passion for science blossomed at San Marcos High. Entering with the goal of becoming a medical doctor, Gonzalez discovered chemistry as a sophomore, but that burgeoning interest was eclipsed the next year when she took an honors class in genetics.

“I was hooked. I loved it and just wanted to learn more,” she said. “I would stay after school and talk to my teacher, and go home and explain things about cells and DNA to my father, who probably had no clue what I was saying but was willing to listen and learn.”

Gonzalez knew she wanted to attend college, and had the grades to do so, but her undocumented status precluded her from pursuing federal financial aid. CSUSM was the ideal destination because she could live at home (her family ultimately bought a house in San Marcos), and her parents were able to cobble together enough money to afford the low tuition. 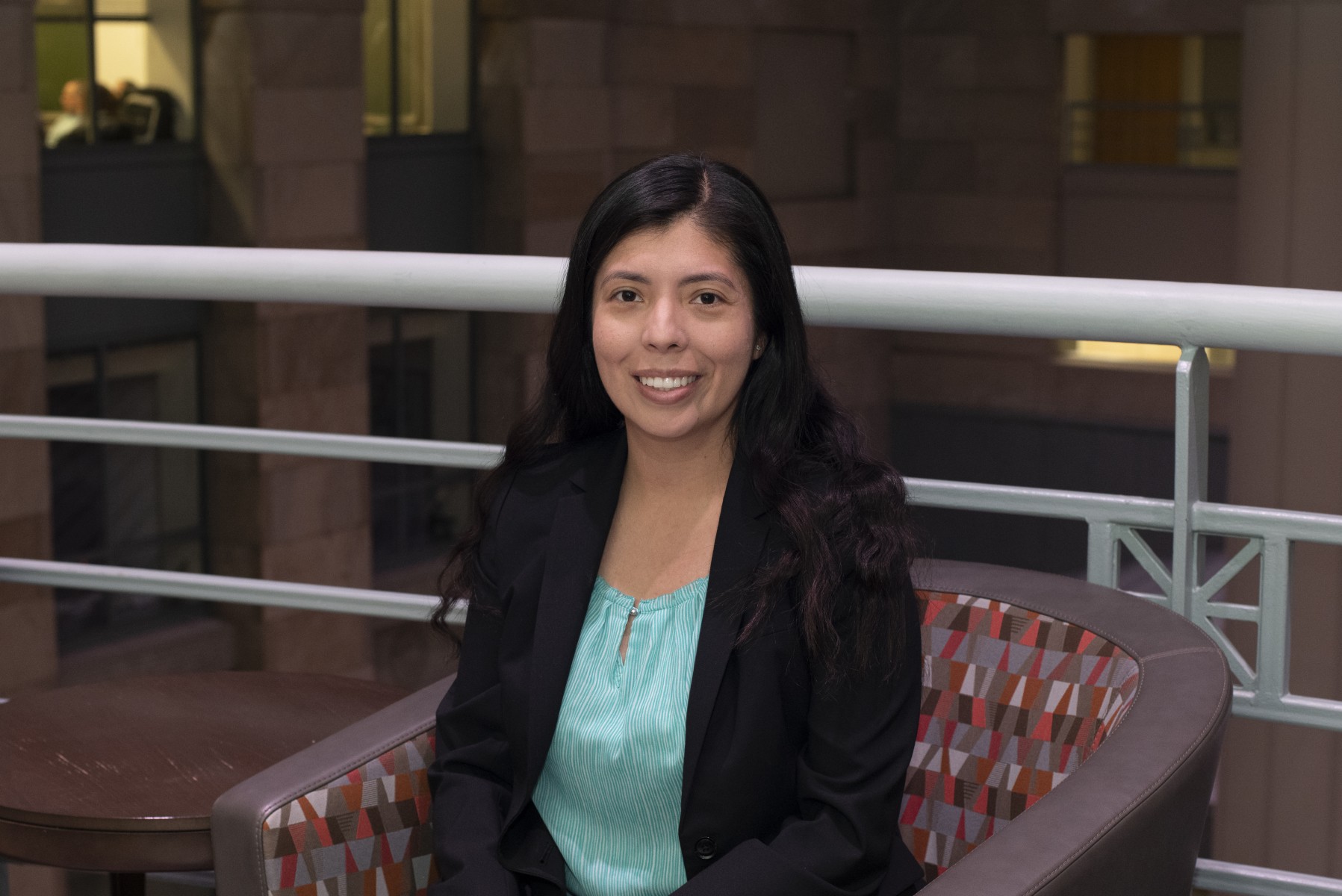 Karina Gonzalez Herrera
The CSUSM alumna is the assistant director of diversity and minority affairs for the Division of Medical Sciences and the Graduate School of Arts and Sciences at Harvard University. Photo by Molly Akin

At CSUSM, Gonzalez quickly found a home in the lab of biology professors Thomas Wahlund and Betsy Read, where she says she could be herself without being judged. Outside the classroom, she similarly was embraced through CAMP, a national program that aims to help students from migrant and seasonal farm worker backgrounds to succeed in college. A member of the third CAMP class at CSUSM, which initially hosted it in 2002, Gonzalez and her cohort participated in a five-week summer program before receiving a host of services during their freshman year at the University.

“She was way ahead of the game,” Minerva Gonzalez said. “She helped tutor some of our other students in math. You could tell from the very beginning that this student was going places.”

Karina wondered, though, how far she could go without legal protection. And in the summer of 2009, after the first year of her master’s program, she confronted the very real possibility of having to leave the country entirely.

When her parents sought green cards, Gonzalez, then 21, was told that she had aged out of their asylum case and would have to apply on her own. After struggling to find and pay for a lawyer – the family of Wahlund, who had died of cancer in 2008, helped cover her expenses – she sought to avoid deportation through what’s called a special rule cancellation, whereby adult family members of U.S. residents can stay if their leaving would represent an extreme hardship (Gonzalez’s parents depended on her for translation and medical help).

She describes her deportation hearing on Aug. 26, 2009 – she recalls the exact date – as the worst day of her life.

“Somebody gets to decide whether or not I get to stay in the States or go back to a place that I no longer remember because I left when I was 11,” Gonzalez said. “I had worked so hard and everything could be trashed, and one person got to decide what my future would be like.”

The judge granted her a green card, opening the door for Gonzalez to seek financial aid and – thanks to her outstanding academic qualifications – gain admission to Harvard’s doctoral program.

But the Ivy League school didn’t have anything like CAMP, and Gonzalez struggled with the cross-country move in more ways than one.

“When I got to Harvard, the difficulty for me was finding a community, finding a family, a support network,” she said. “I was coming to a place where I knew no one, though I was trying to be optimistic and take it as an adventure.

“And though I felt prepared, there were some things I didn’t have a strong background in when I started here. I tried to get help, but I was made to feel small and that I didn’t belong by a few people.”

Gonzalez fought through the adversity and finished her Ph.D. in 2016, two years after she gave birth to twins (Dante and Elena, both now 4); a year later, she became a U.S. citizen. She has considered a career in science – either as a professor or researcher – but has decided that she can have a greater impact by helping the next generation of scientists steer clear of the pitfalls she experienced early at Harvard.

Her choice was reaffirmed in July when she participated in the SACNAS Leadership Institute in Washington, D.C., a five-day course that provides leadership training for underrepresented minority scientists.

“I have this sense of urgency in regard to what I’m doing now in diversity and minority affairs given my experience as a graduate student at Harvard,” Gonzalez said. “My focus is trying to build a vibrant, supportive and welcoming community among minority students so that if anyone is struggling, they have a family – a supportive network they can go to.”

Two of the biggest achievements in Jacob Thum’s life to this point can be traced back to the motorcycle accident he survived when he was 17.Thum’s injuries left him in a wheelchair, wondering if he …
Read more

During her improbable climb from a poor girl growing up in China to a partner at one of the largest accounting firms in America, Annie Norviel can point to many significant milestones along the …
Read more
NewsCenter