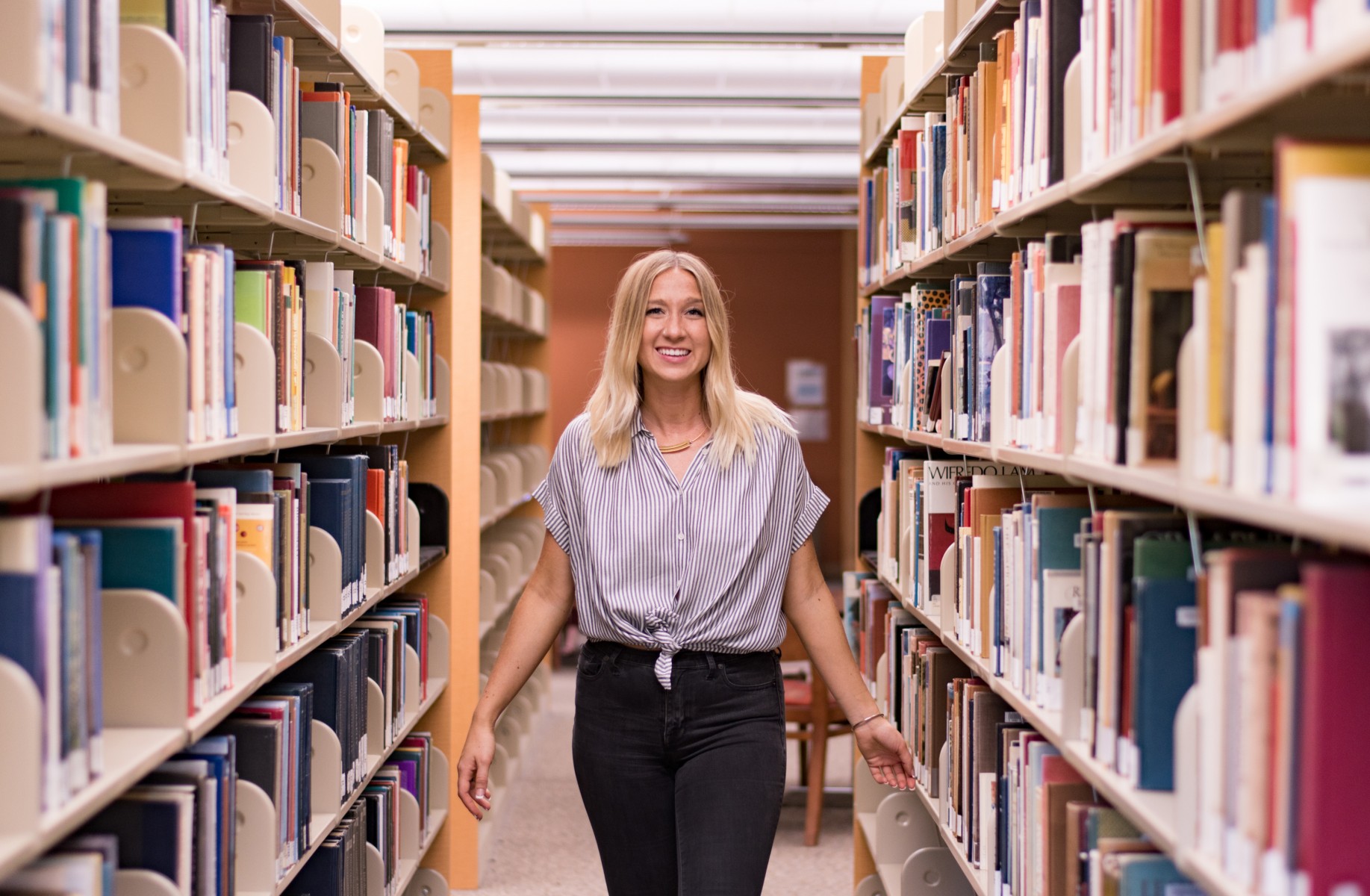 Sara Freitag’s passion in advocating for marginalized populations was ignited while working for a year as a photojournalist and humanitarian, three months of which were spent in Panama. That passion motivated the Cal State San Marcos communication major to author an exhaustive analysis titled “Gucci: Flattening Women through Patriarchal Heteronormativity” that secured the 3rd Annual CSUSM Library Award for Undergraduate Research, Scholarship, and Creative Activity in the category of Interpretive Analysis for its critical look at the Italian fashion brand’s advertising campaigns.

“This subject is especially important to me, as I am a professional photographer and I’ve seen firsthand how women are impacted by images that are put forth in the media,” said Freitag, who plans to pursue a master’s degree in communication and rhetoric in the fall of 2019. “These are not accurate depictions, and I wanted to shed light on the lies that are being told about women.”

Hers was not an opinion piece. “Gucci: Flattening Women through Patriarchal Heteronormativity” is based on reams of research, which is what the Award for Undergraduate Research, Scholarship, and Creative Activity is all about. The competition is presented in three categories: Creative Works, Empirical Research and Interpretive Analysis, with winners receiving $600 each. Entries are judged on four factors: The project itself, such as excellence in writing or the quality of a visual presentation; a supporting letter from a faculty mentor; the quality of a bibliography; and a reflective essay that articulates the research that went into their project.

It is the reflective essay, said STEM Librarian and Awards Committee Chair Talitha Matlin, that sets this award apart from most general research competitions.

“We’re looking for students to show that they thought critically about the kind of information they needed for their project, their strategies for finding that information, and whether they looked at different perspectives,” she said.

“Physically, women are implicitly told that, unless they size down, they will never measure up.”

Freitag in her reflective essay said she conducted her research through myriad methods, including CSUSM’s library databases, particularly ProQuest.

“Persistence is the name of the game when it comes to research,” she wrote. “Utilizing articles referenced by reputable authors and prior written works, I navigated my way through the jungle gym of scholarship, and in an effort to incorporate particularly relevant citations and quotes from other work, I sought out and found original sources.”

The result: Freitag documents how the Gucci brand, once on the brink of bankruptcy, clawed back from the abyss in large part through the exploitation of women in its advertising, and the impact that exploitation is having on society.

Freitag is no stranger to the subject she writes about. The Cougar Chronicle opinion editor is a San Diego-based wedding, lifestyle and fashion photographer and she worked for more than a year as a wardrobe stylist.

“Inaccurately portraying women’s ideal beauty standards, positioning female models in demeaning poses, and obscuring their faces are ways that Gucci denigrates the image of women,” Freitag said. “Gucci’s portrayal of women gives the illusion that the female half of the population is of little worth, to be subordinated by the dominant male population.”

“Sara’s research reflects that of a hard-working student, and I am pleased to see the fruits of her labor,” he wrote in his recommendation letter.

The other three winners in this year’s competition:

Summary: This project looked at the efficacy of a popular smartphone application called the 7 Minute Workout, which claims to be scientifically proven to promote weight loss and improve cardiovascular function. The aim of this study was to compare acute physiological and perceptual responses between a single session of cycling-based high intensity interval exercise and the 7 Minute Workout.

Summary: This paper offers an explanation as well as a historic overview on how the Japanese kimono became integrated into American culture. But more important, this project illustrates how Americans who wear kimonos are demonstrating the effects of globalization and how relations between Eastern and Western cultures have strengthened as a result of the Japanese kimono.

“We’re trying to emphasize the importance of research being at the forefront of what our undergraduates are studying no matter the discipline, and this year’s undergraduate research awards underscores our success in that area,” Matlin said.