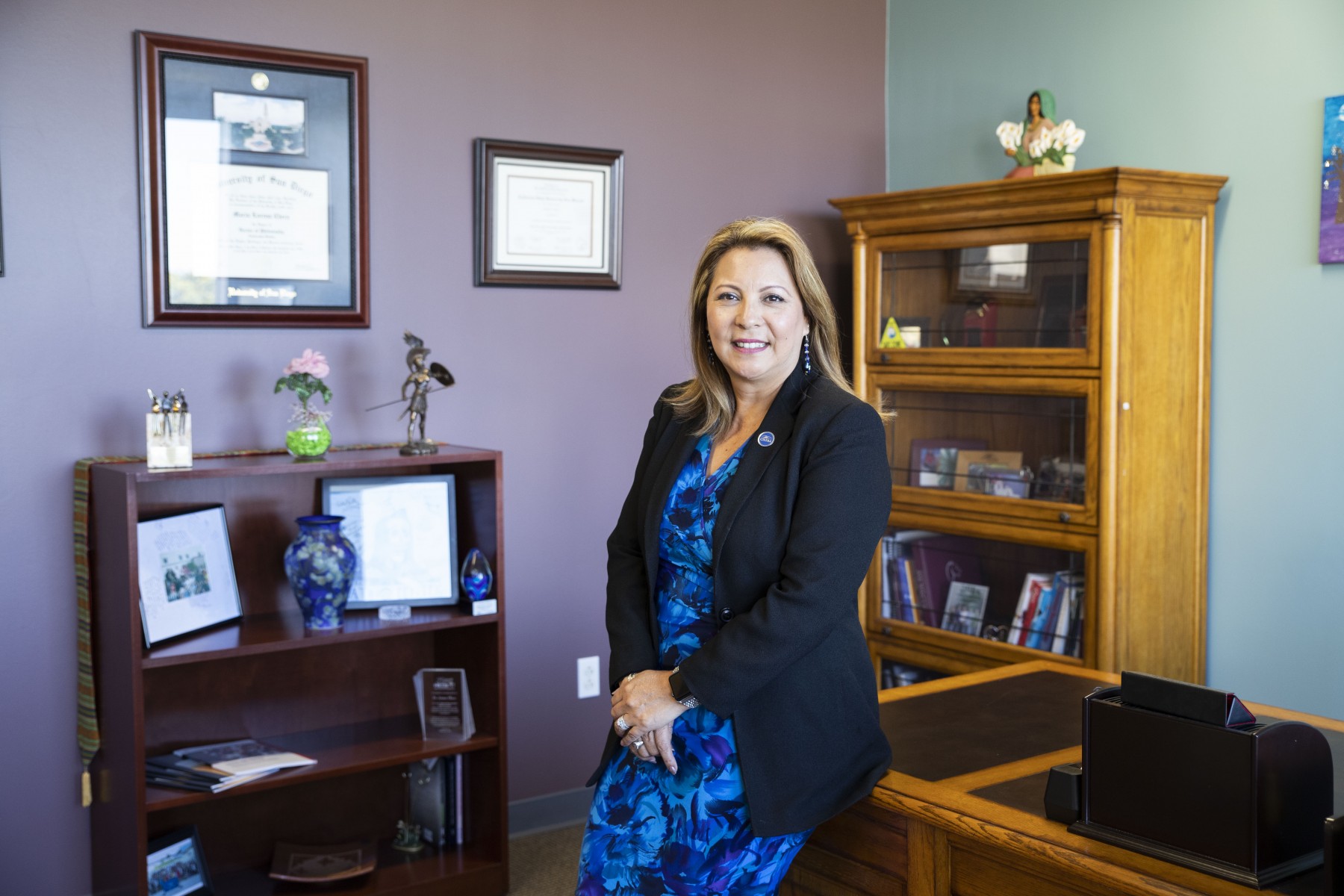 One of the first employees of Cal State San Marcos and a bachelor's and master's alumna of the university, Lorena Checa is in her seventh year as vice president of Student Affairs. Photo by Andrew Reed

A girl grows up in Mexico, one of eight children of parents who didn’t attain more than a third-grade education.

The family moves to America in search of a better life, but college is never discussed; it’s not even in their frame of reference. The girl is expected to attend high school, get married, and raise children.

That’s exactly what she does, fulfilling her parents’ wishes. Yet she yearns for more. She finds a job at a new university in North San Diego County and discovers that not only does she enjoy work outside of the home, but she’s good at it, too.

As she’s entrusted with more and more responsibility, she aspires to climb the ladder, except she can’t because she lacks a college degree. So she decides to earn a bachelor’s degree. Then a master’s degree, followed by a second one. She finds the learning process ever more exhilarating, so she gets really bold and goes for a Ph.D.

Along the way, she moves higher and higher within academia until she becomes a vice president.

That, in broad outlines, is the personal story of Lorena Checa, vice president of Student Affairs at Cal State San Marcos. It’s the one she told to an audience of several hundred people at the Report to the Community event on campus last February. It’s the one she has shared with many student groups at CSUSM. It’s the one she really never tires of telling, because she’s acutely aware of its power to move, to inspire, to motivate – particularly at a university where so many students come from underrepresented backgrounds, where more than half of the most recent graduating class were the first in their families to achieve a four-year college degree.

“I will never forget where I came from,” Checa said. “In telling my story, I feel like I can contribute to the success of all the students that we serve in terms of, ‘If I can do it, you can do it, too.’ ”

Checa, of course, contributes to student success with much more than her words. For the last seven years, she has served as the leader of one of the largest divisions at CSUSM. Student Affairs encompasses 32 departments organized into six different units by mission and service type, including Student Academic Support Services, Student Life and – as of last year – Athletics. In that role, Checa has furthered the work that has been her guiding light throughout her career in higher education – acting as a fierce advocate for students of all backgrounds, with a particular soft spot for underrepresented students and the programs and services that most benefit them.

The students, in other words, who are like she once was.

“It’s empowering to see someone who has a story that can resonate with the majority of our campus serve in the role she does,” said Kenny Tran, the president of Associated Students, Inc., an organization that operates under Checa’s leadership. “It inspires many students to say that if she can, they can, too.”

Now, Checa has received recognition nationally for the work she has been doing at CSUSM for years. Early last month, she was honored as the 2019 recipient of the Scott Goodnight Award for outstanding performance as a dean/vice president from Region VI of the National Association of Student Personnel Administrators (NASPA). The award is named for the founding chair of the NASPA board of directors and a former dean of men at the University of Wisconsin.

It is presented to a dean or vice president who has demonstrated sustained professional achievement in student affairs work, an innovative response in meeting students’ varied and emerging needs, and effectiveness in developing staff and leadership in campus and community affairs.

“Her effectiveness is grounded in her personal journey and her desire to help others succeed,” said Alan Brian, the director of planning, assessment and professional development in Student Affairs, who has worked with Checa for almost eight years and who wrote the letter nominating her for the Scott Goodnight Award.

“During her professional career, she has consistently been mentored by others who recognized her potential and provided her with the tools and opportunities to grow. She recognizes the way that the support she has received has allowed her to succeed, and strives to provide the same support and opportunities to others.”

The significance wasn’t lost on Checa when she received the award in person on Nov. 15 from CSUSM President Ellen Neufeldt, who surprised Checa along with a group of her closest colleagues. Neufeldt herself won the Scott Goodnight Award in 2015 when she was vice president of student engagement and enrollment services at Old Dominion University.

“I feel blessed that we have a president who is a former VP in the same field because there are some common understandings when it comes to doing the work of student affairs,” Checa said. “I don’t have to sell her on anything. She gets it.” 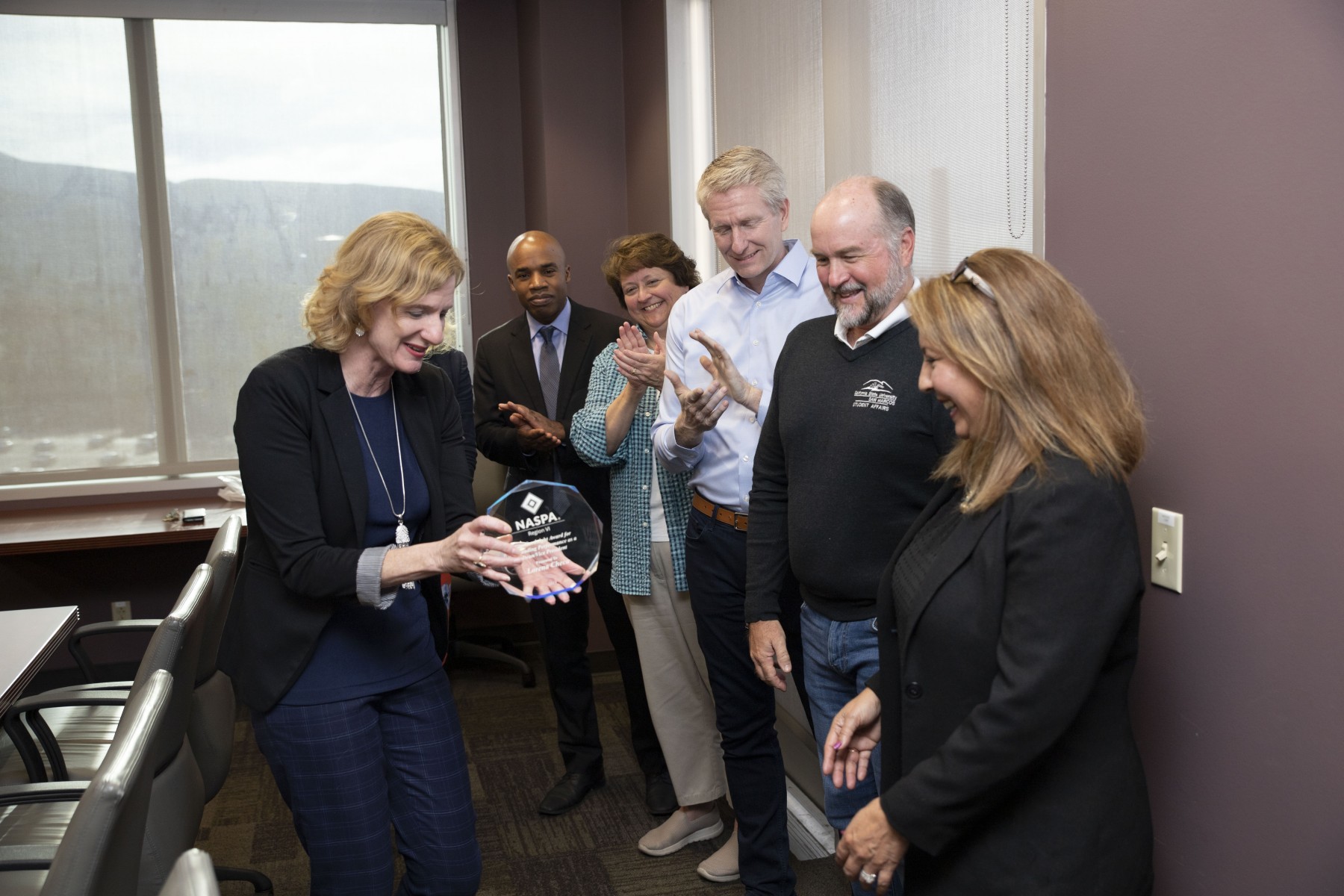 President Ellen Neufeldt surprised Lorena Checa last month by presenting her with the Scott Goodnight Award for outstanding performance as a dean or vice president. Photo by Andrew Reed

That Checa occupies a position in which she can receive such a prestigious accolade is a testament to the power of the immigrant story and the transformative effect of CSUSM’s institutional mission. Checa was only 8 years old when her parents left Uruapan, about 250 miles west of Mexico City, and brought her and her five sisters to California (her two brothers were born in America). While her father and mother worked in an embroidering factory, Checa attended school in Ontario, where she learned English quickly and made friends easily. When she got married at age 16, she was set for good, at least in her parents’ eyes.

“I had no idea that higher education would change my life and the life of my family and my community,” Checa said. “It’s been a true gift.”

In the mid-1980s, Checa and her now ex-husband moved to Vista, where he got a job in construction and she as a receptionist (and then a buyer) for a manufacturing company. One day, a friend told her that a new university had just opened in San Marcos. Checa liked the prospect of good benefits for her two young children, so she applied for a temporary appointment of only 60 days, with the hope that it would lead to something more.

“I was hired to register the first 500 transfer students back in the Jerome’s days,” she said, referring to the furniture store that neighbored CSUSM when it opened in a strip mall. “Cougar Central was a counter with somebody from financial aid, somebody from admissions and just a general individual who would answer questions. One of the tasks was to ensure that when you communicated with people, you didn’t say we’re San Diego State North County. We were a new university.”

Checa parlayed the short-term gig into a more stable one as an administrative assistant. She did her prescribed duties but also many beyond them, because as a fledgling school, CSUSM had a dire need for jacks of all trades. As a result, Checa felt confident when she pursued a position as student services professional, acting as liaison to the local community colleges. But the gaping hole in her résumé doomed her chances.

“Because I didn’t have a college degree, I didn’t get that position,” Checa said. “I was devastated. That was the turning point. I said, ‘That’s never going to happen to me again.’ ”

Almost overnight, higher education became Checa’s raison d’etre. After two years at Palomar College, she transferred to CSUSM and got a degree in literature and writing studies in 1998 – all while continuing to work at the university and raising her kids. But that was just the start of a long, rewarding journey of self-betterment that saw her achieve an MBA from CSUSM, a second master’s in educational counseling from San Diego State and a doctorate in higher education administration from the University of San Diego.

In the process, Checa left CSUSM to branch out career-wise, working for three years as the assistant dean of USD’s College of Education and helping to build student services programs from the ground up. She couldn’t stay away for long, however, and soon after former President Karen Haynes arrived in 2004, Checa returned home as the director of CSUSM’s Educational Opportunity Program (EOP) and TRIO Student Support Services.

“I missed my family,” she said. “Because I grew up here professionally, I know that the high collaborative spirit is unique. We have a unique culture and we stand for the same values.”

As vice president, and in her previous roles at CSUSM, Checa has strived to develop programs that serve students from all walks of life. Under her leadership, the university has established ACE Scholars Services for former foster youth, the Latin@ Center, the Black Student Center, the current Veterans Center and the DREAMer Resource Office.

As a sign of her impact on students, since 2016 the EOP has given the Lorena Checa Award to the student whose academic road mirrors Checa’s in terms of perseverance, academic excellence and inspiration.

Checa now has three granddaughters – ages 11, 9 and 7 – and sometimes they visit her in her office overlooking Craven Circle, running around and being blissfully unaware that their grandmother’s success may fundamentally alter the trajectory of their lives.

“As a first-generation college student, I think about breaking the cycle and what that means for me and my family and my grandkids and my community,” Checa said. “The sharing of that experience is very meaningful to me. I feel proud, honored, humbled that there has been that level of support on campus to allow for individuals like me to continue to grow and develop and be given opportunities.