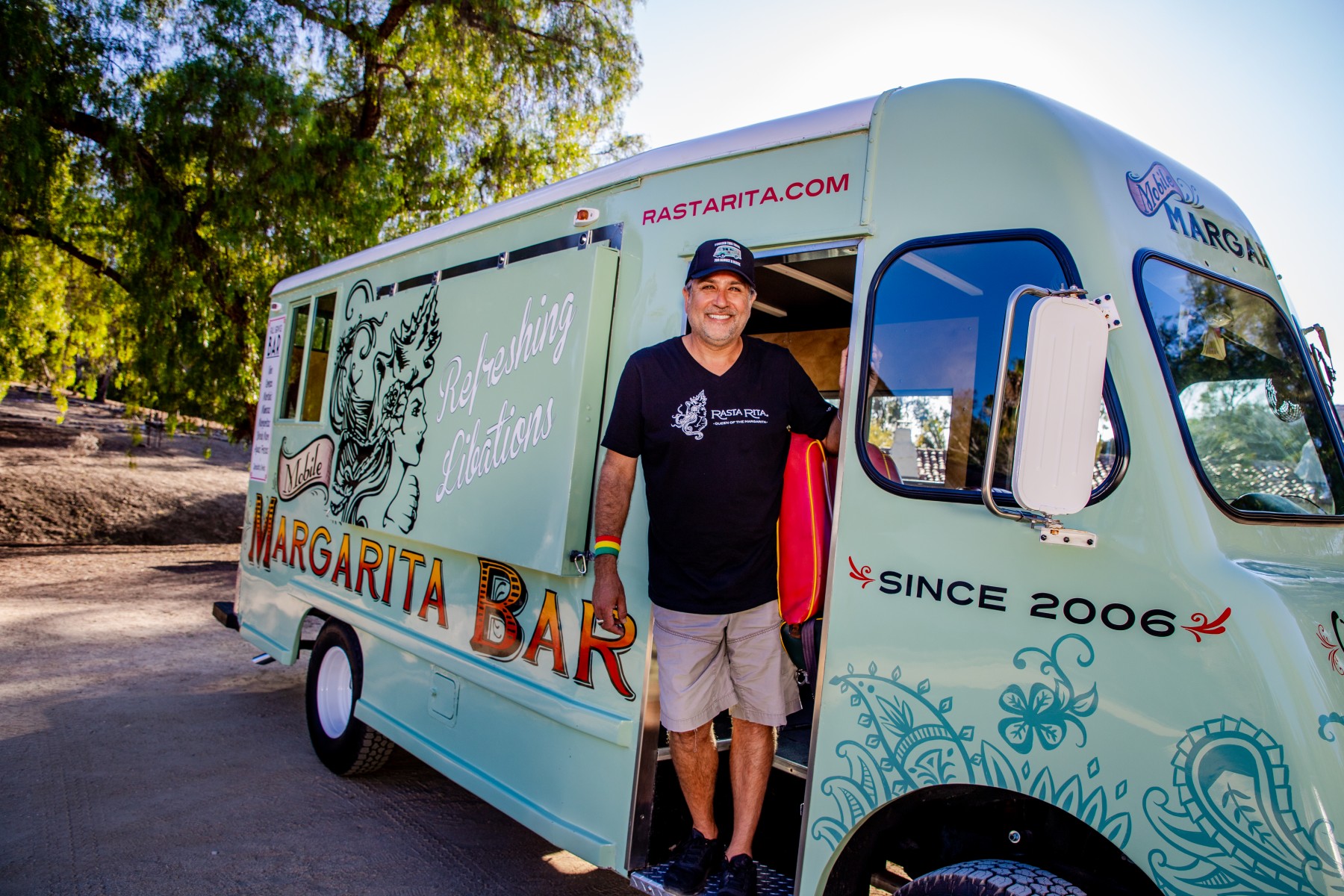 Mario Melendez, a 1996 Cal State San Marcos graduate, is the owner of what he believes is the world's first mobile margarita bar. Photo by Christine Vaughan

The listing on eBay was for a 1965 GMC truck, the kind used back in the day to make bread deliveries. The cost was $1,200. The mileage was impossible to know, really, because the truck didn’t have a working odometer.

It didn’t have much that was working, Mario Melendez (’96) learned as he began to consider purchasing the vehicle seven years ago. Melendez owned a taco catering business and had been thinking about adding a food truck to the mix. But this model, which had been languishing in a junkyard for years, wasn’t exactly ready to start cranking out street tacos.

Melendez, though, saw potential where most would have seen only decay. After buying the truck, having looked at only grainy internet photos of it, he flew from his home in Dana Point to Sacramento to claim his auction prize.

“Not only was it collecting rust, it was collecting everything – animals, rat poop. There was a hornet’s nest in there. It was horrible,” recalled Melendez, a 1996 graduate of Cal State San Marcos.

Melendez hired a mobile mechanic to get the rig running, then donned a hazmat suit – he jokes that he resembled Walter White of “Breaking Bad” fame – for the long ride back south. With speeds limited to as low as 40 mph and frequent stops for gas (the gauge didn’t function, after all), a drive that should have taken about seven hours was more than three times that.

These days, Melendez attracts stares on the freeway for a different reason. His idea for a taco truck soon evolved, and now he’s the proprietor of what he believes is the world’s first mobile margarita bar.

And what a bar on wheels it is. Rita, as Melendez coined it, has been fully restored and hand-painted in a striking mint green with vintage lettering and styling. Since it first hit the road in 2012, the truck has been the star of thousands of private events and been used as a prop in TV commercials for such companies as Southwest Airlines, NBC and Humira.

When Melendez cruises down the road, windows open and music blaring, he sometimes can’t help feeling like Lennon and McCartney are riding shotgun.

“You’re on the freeway, and people are waving at you and honking their horns,” he said. “They’re taking photographs. It’s like you’re riding with the Beatles or something.”

Mario Melendez bought this 1965 GMC truck on eBay for $1,200.
More than $100,000 in repairs and refurbishing later, Rita was born. Photo by Christine Vaughan

Rita is the centerpiece of Rasta Rita, Melendez’s beverage catering company, which expanded two years ago to include Lady, a 1973 Chevy Balboa RV that he rescued from the chopping block – for free this time – and that was lovingly refurbished just like her sister. Business has been so good that Melendez is now on the lookout for a third vehicle that he would deploy as a rum truck.

Rasta Rita, in turn, is an offshoot of Rasta Taco, which Melendez founded in 2006 and which features both the taco catering and what he calls the smallest restaurant in California – a 220-square-foot taco stand in Laguna Beach that was converted from a one-chair barber shop.

You might be asking what the connection is between tacos, margaritas and the Rastafarian culture referenced in the company titles. Melendez stumbled on the idea during a vacation in Jamaica. Traveling through the backcountry, he encountered a series of jerk chicken stands that reminded him of the taco stands of Baja California, where he lived for a spell in the 1990s. He dreamt up the name Rasta Taco while on a bus en route to Bob Marley’s house, and reinforced the link years later by opening a second restaurant location in the Jamaican tourist town of Ocho Rios.

Rasta Rita was conceived as a supplement to the taco business, but thanks to that photogenic truck, it quickly became the main attraction. For her killer looks, Rita owes a huge debt of gratitude to a couple of people. After Melendez completed the harrowing drive south from Sacramento, he had bad experiences with both a mechanic and a painter before finding the men who made the truck hum and sparkle.

Aaron Hamusek of Orange County Hotrods practically rebuilt Rita from the inside out and still maintains it because, as Melendez puts it, the truck is his business and if the engine stalls on his way to a wedding reception, the bride won’t stand for any excuses.

“He does a phenomenal job,” Melendez said of Hamusek. “If something’s broken, he’ll make the part. He won’t just go buy it; he’ll build it. This particular truck needed that because there are a lot of hard-to-find parts.”

As for the design, Melendez was insistent that he didn’t want decals or wraps. Enter Christopher Lord, a Long Beach artist who has a number of national clients and spent a decade traveling the country to paint signs and murals for Lucky Brand denim’s retail stores.

“I was very clear to Christopher that I wanted a billboard type of feel, but I didn’t want it to look like I was selling something,” Melendez said. “It just turned out perfect. The minute I drove that thing off, I could feel it. I could feel that I was doing something unique.” 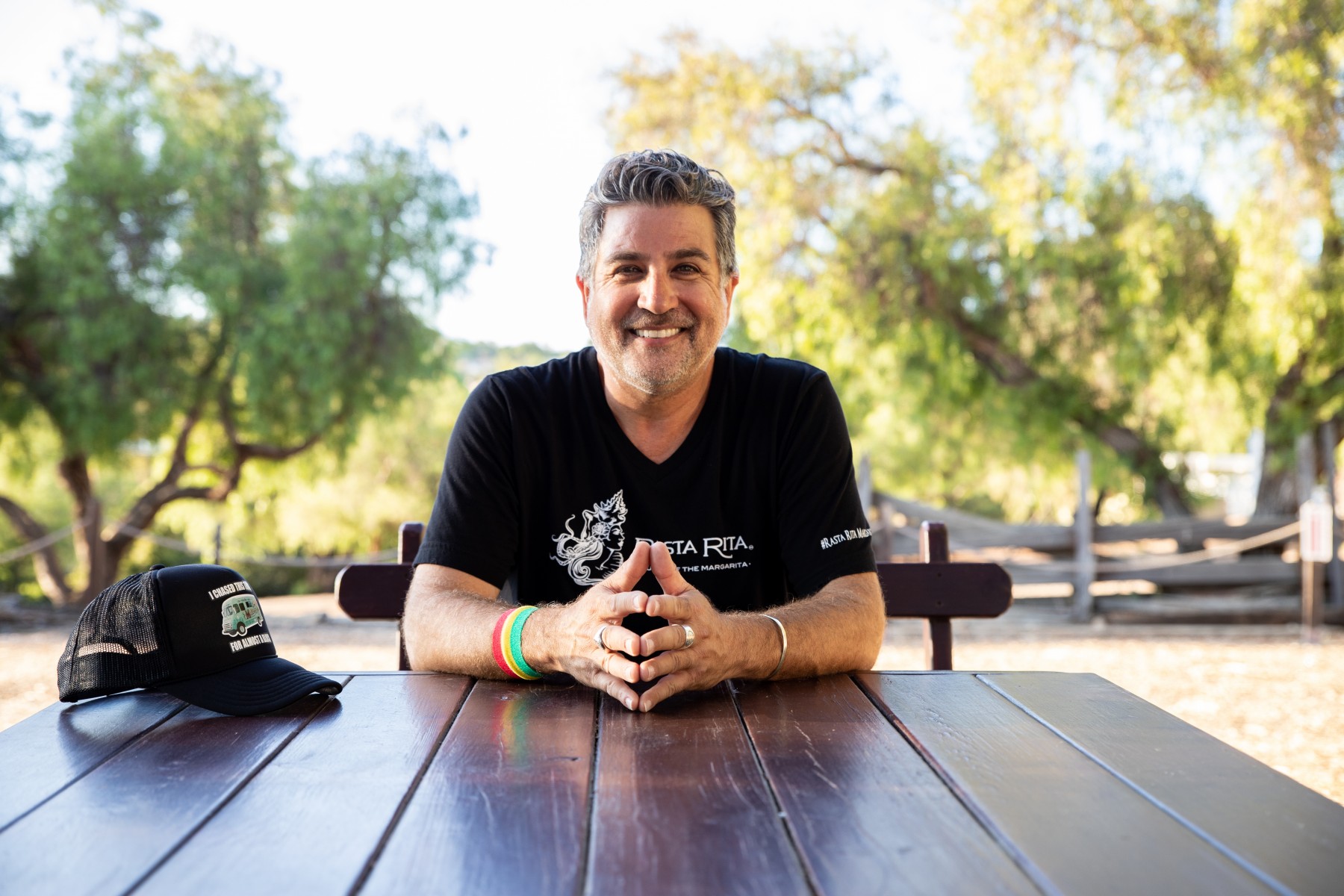 Melendez budgeted $15,000 for Rita’s restoration but ended up spending more than $100,000. His packed schedule of gigs tells him it was worth it. Assisted by a team of contract workers, he books corporate events, weddings and parties throughout Southern California, but he’ll venture farther if necessary. Rita has been as far north as Palo Alto and as far east as Las Vegas. Melendez even offers a non-alcoholic package with virgin margarita mixes, agua frescas and signature sides.

The unforeseen birth and success of the margarita truck is just the latest curveball in a life that has been full of them. Melendez attended boarding school for five years, served in the Persian Gulf War as a member of the U.S. Navy, and taught English to preschoolers in Mexico. At Cal State San Marcos, where he majored in liberal studies, he worked in the Office of Global Education and had his eyes opened to opportunities to study abroad. He lived in Spain for his final semester in 1996 and loved it so much that he stayed in the country to earn an MBA.

His lifelong ambition had been to try his hand in fashion design, so when Melendez returned to California, he used his business chops to start a men’s clothing line with a Latin influence. Within a year, the clothes were being sold in 50 stores and Melendez had been interviewed by such magazines as People and Newsweek. But the company became a casualty of the economic downturn after 9/11, and he was plunged into a “midlife crisis in my late 20s.”

Melendez never could have imagined that he ultimately would be saved by a margarita truck. Heck, he didn’t even know how to make a margarita.

“He’s said this to me so many times, that the best part of the job is that he gets to bring joy with the truck,” said Jeri Regan, Melendez’s longtime girlfriend. “It’s basically the best guest at any event. He gets to see the intimate part of people’s lives and lifestyles. There’s a lot that goes on in California that you’re never privy to see.”

Rita is Melendez’s ticket. He has catered big corporate parties for Facebook and HBO. He has done events where guests included Angelina Jolie, Queen Latifah, LL Cool J and the cast of the Showtime series “Shameless.” He has been to the house of John Paul DeJoria, the founder of Paul Mitchell hair products, who also happens to own the company that produces Patron, one of the world’s best-known premium tequilas. (“And I’m serving this guy a margarita,” Melendez said incredulously.)

At one especially posh gig, Melendez asked to use the bathroom, went inside the house, and spotted an Oscar sitting on a shelf. The nameplate read Hilary Swank.

“The starstruck part fades because you know that you have a cool truck,” Melendez said. “We’ve been at events at $10 million beach houses in Malibu. And people are outside in the alley with us and the truck.”